Playing ‘The Witcher 3’ on the Switch shouldn’t work, but it does

When Nintendo briefly mentioned in its barrage of E3 reveals that The Witcher 3 would be ported to the humbly powered — and portable — Switch, it beggared belief. The Witcher 3 PC install (DLC, expansions and all) demands just shy of 50GB of disk space. The biggest Switch cart is 32GB. So, can you make The Witcher 3 work on the Switch? And when the October 15th release date rolls around, will you want to play it? I played it for almost half a day at Nintendo’s UK HQ earlier this week, and the answer is yes. But let me try to answer some of your (and my) concerns along the way.

Some things had to change, and according to Piotr Chrzanowski, Senior Producer at CD Projekt Red, it took over a year to get to here. The aim was always to replicate the entire console Witcher experience (if not the PC one) on Nintendo’s hybrid console, which has its own challenges beside sheer GPU power.

“There was also the challenge of dual play [playing it handheld], where we had to scale things to work. It runs on the battery, we need to ensure the small print on-screen was readable, workable,” he said.

Besides the fact that it runs at all, I was most surprised by how the audio didn’t seem heavily affected or crunched to fit on to a single game cart. All the dialogue is still here, including the cloying-but-universe-building small talk from NPCs as you dash past them to slay a vampire or fetch some random item.

There’s some audio compression at play, but it’s not aggressive enough to ruin The Witcher 3’s charm. Visually, more effort was needed. Chrzanowski explained: “We worked on things like textures, and draw distance, to optimize gameplay in a smart way.” Judging from my playtime, it also seems like minor graphical flourishes, like shadows, were simpler or reduced to lighten the graphical load.

Chrzanowski continued, explaining what else helped shrink the game: “We rescaled textures, while cut-scenes run at 720p [when docked].” The thrust seems to be making it smaller without losing anything in particular. You’ll have heard the game runs with dynamic resolution. If more is going down graphically around you in The Witcher 3, the Switch will step down resolutions, prioritizing 30 frames per second over fidelity. The right choice, in my opinion.

I played The Witcher 3 exclusively in handheld mode — which makes sense with a handheld-only Switch on the horizon, as well as a game most of the assembled journalists have played at 1080p. Due to reduced graphical power when undocked, it was a showcase in how the game can run. The dynamic resolution shifts are noticeable, yes, but didn’t affect how I played, which was a relief. 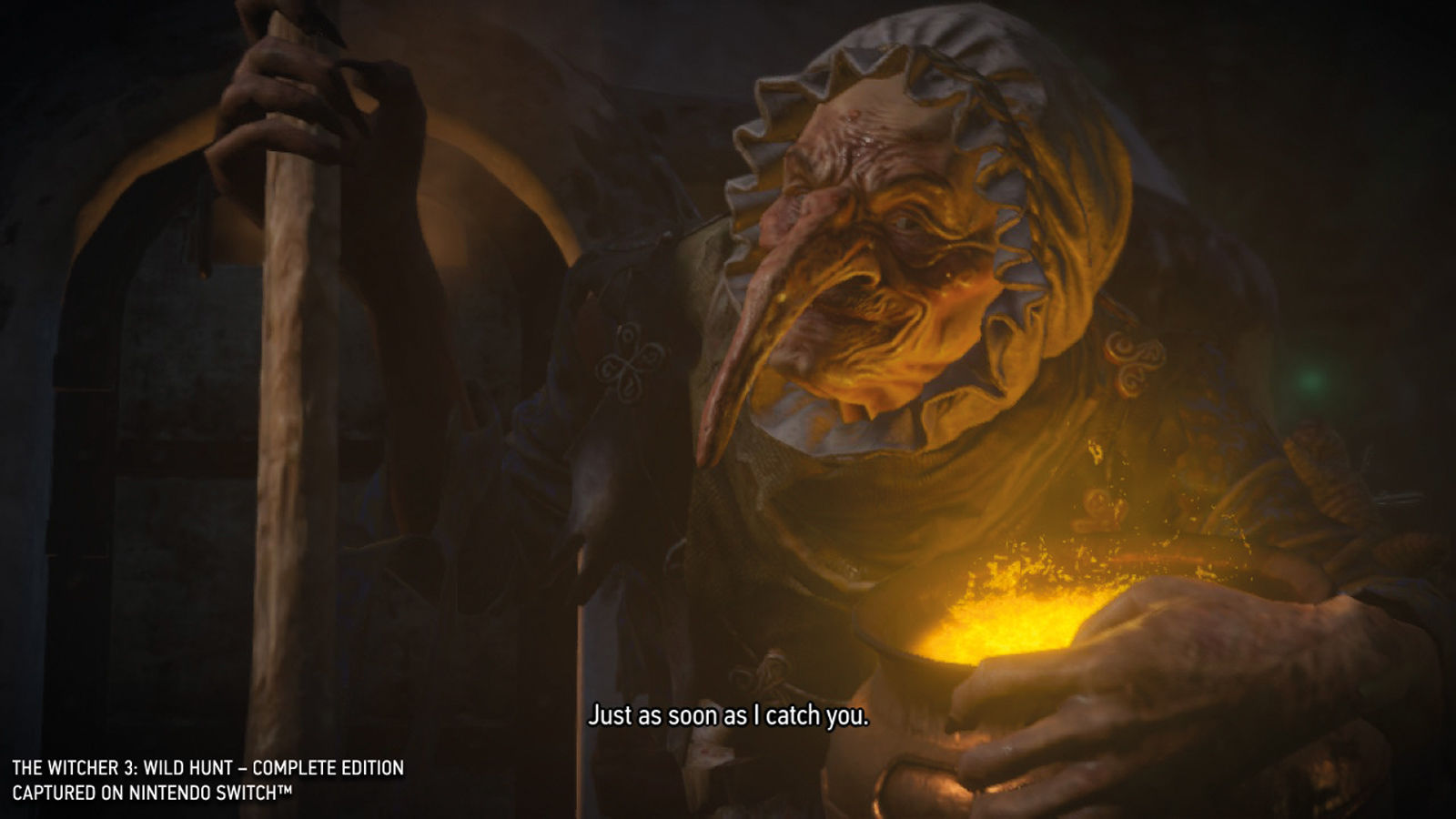 To be honest, I liked the dreamy smudginess of “Blood and Wine” chapters of the game — we were given free rein to hop around the game to see how iconic areas were realized. If you haven’t played The Witcher 3 before, “Blood and Wine” takes a fairy tale-esque direction, with bright colors and green fields offering a respite from the grimmer grey-brown of most of the world.

Even if Geralt of Rivia, our Witcher hero, is surrounded by lake hags or wolves, the game runs at a fair clip. That said, this Switch port isn’t a panacea: You can still die by jumping a little too enthusiastically downhill; the battle mechanics are still messy and chaotic without a keyboard; the game can still glitch-out and ruin your playthrough and there are still some rough difficulty spikes. However, the technical accomplishment here — a portable version of The Witcher 3 — is an incredible feat. All the DLC is here, all the choices, all the abilities, all the beasts and monsters. Nothing’s been removed, game-wise. Power crunching aside, it’s still a beautifully realized world to explore, too.

Now, whether it looks as good as people remember it being on the PS4, Xbox or PC is a dumb question, and it’s probably not the point here, either. The Witcher 3, now a four-year-old game, can reach a different audience through the Switch, a console that’s smartly tapped older games to fill its third-party game lineup, from nearly the entire Final Fantasy series through Bayonetta and even LA Noire. The console makes it easy to catch up with games you might have missed the first time around. Portability also offers a better chance of finishing a game too — especially if it’s a long, involved one. The Witcher 3 certainly fits that bill.

Don't miss a deal at House of Fraser
Best offers at Ticketmaster UK
Discounts, Sales and Deals at O2 Mobile
Save your money with Sky
Online-Shopping with Boohoo
Best products at Sephora
Latest Posts