Looks-wise, there’s more than a touch of the Sony WH-1000XM3 about the PH805. The headphones don’t feel quite as solidly made nor as supremely comfortable, but they are light, fit my ears/head reasonably well and fold flat for stowing in a bag or the supplied case.

Like many of their rivals, the PH805 headphones have a mixture of touch and physical controls. Tap the outside surface of the right earcup and you toggle between noise cancellation off, on and “Awareness mode”, which allows you to hear a little bit of what’s going on around you. You can also swipe up and down to adjust the volume and place your palm against the cup to call Google Assistant into action.

As for physical controls, there’s a toggle switch on the right earcup for skipping, playing, pausing and power. A 3.5mm analogue audio jack sits on the bottom edge of the right earcup and there’s a microUSB port on the opposite earcup for charging the headphones. Battery life is up to 30 hours and thanks to fast charging tech, you can get an extra two hours of playback from these with a mere five minutes connected to the mains. 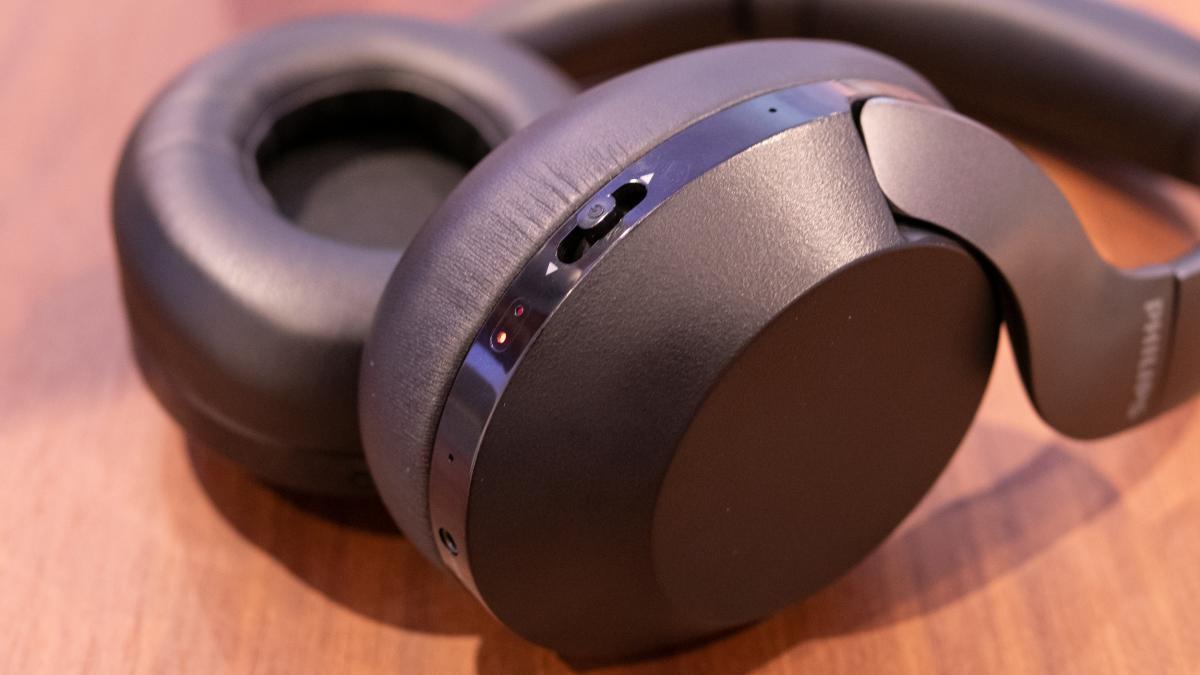 If I’m honest, the most attractive thing about the Philips PH805, however, is the £180 price. What’s more impressive is that this doesn’t preclude the inclusion of advanced features.

For the noise cancelling, the PH805 headphones use an array of four microphones in each earcup, two inside each cup and two on the outside. These, Philips says, along with the memory foam earpads, go together to reduce background noise by up to 95%.

It’s always worth taking such claims with an unhealthy pinch of salt, especially when simple percentages are used, but when I tried them on in the demo room they were pretty effective at removing most of the aeroplane rumble being piped through a nearby speaker.

First impressions are that they aren’t quite as effective as the Sony WH-1000XM3 or the Bose QuietComfort 35 II but they are considerably less expensive – I’d need to compare the headphones side-by-side to be absolutely sure. I’ll be getting a pair for review shortly, though, so I’ll be able to tell more easily then.

Likewise, it was difficult to gauge how good or bad the sound quality was, but on first listen I noted plenty of bass and a nicely warm balance to the rest of the sound signature. It’s rather tricky to say more than this about the Philips PH805 without listening to them with my own music for a longer session, unfortunately. With large 40mm drivers, however, they ought to sound pretty good.

At such a low price, the Philips PH805 already looks to be an attractive proposition. The headphones are light and comfortable, come with a semi-hard case, and both 3.5mm and a USB charging cables are included in the box.

If they come anywhere near sounding as good as their far more expensive rivals they’ll be a very good alternative for those in the market for ANC headphones who simply can’t stretch the budget to a pair of Sony or Bose headphones. We’ll be updating this ears-on piece with a full review as soon as we can lay hands on a pair.

Don't miss a deal at Sephora
Best offers at Microsoft Store
Discounts, Sales and Deals at Currys
Save your money with Virgin Media
Online-Shopping with Sky
Best products at Farfetch
Latest Posts