If you have a Philips Hue Bridge in your home, or don’t mind adding one, the Philips Hue Play light bars can deliver bias lighting to your home theater. They’re even better as a responsive bias lighting for your PC monitor, though, especially if you’re a gamer.

Hue Play light bars can be integrated with the rest of the Philips Hue smart lighting ecosystem, of course, which is compatible with Amazon Alexa, Google Home, and Apple HomeKit. But if this is the first Hue component in your home, you’ll need to also purchase the $60 Philips Hue Bridge. You can then integrate these versatile devices into any lighting scenes you create using other Hue bulbs.

That said, a single Hue Play, plus the cost of the required Bridge is nearly twice as expensive as any of the other bias lighting kits I’ve tested (the two-pack reviewed here costs $130 and also does not include the Bridge). Syncing Hue Play light bars to your computer monitor, on the other hand, is a much better experience.

Getting started with the Philips Hue Play kit is a surprisingly simple process. Each light bar comes with a six-foot cable that plugs into a single power adapter. The power adapter can accomodate up to three light bars (add-ons cost $70 each). And it bears repeating that the required Philips Hue Bridge is not included in the kit.

The first step is to decide where to place your light bars, and here’s where you get to be creative. If you’re using the Philips Hue Play for your TV, you can set the light bars horizontally on their sides; the wedged back of the bars aims the lit side upwards at an angle, effectively splashing light onto the wall behind your set. The rubberized surface of the rear wedge helps to ensure the light bar doesn’t slip.

Another option is to use one of the two pairs of plastic mounting brackets, which you can easily attach to the light bars using the included screws and an Allen wrench. One set of brackets lets you stand the bars up vertically, with the brackets serving as a base, while the other set lets you mount the bars on the back of your TV using an adhesive backing. 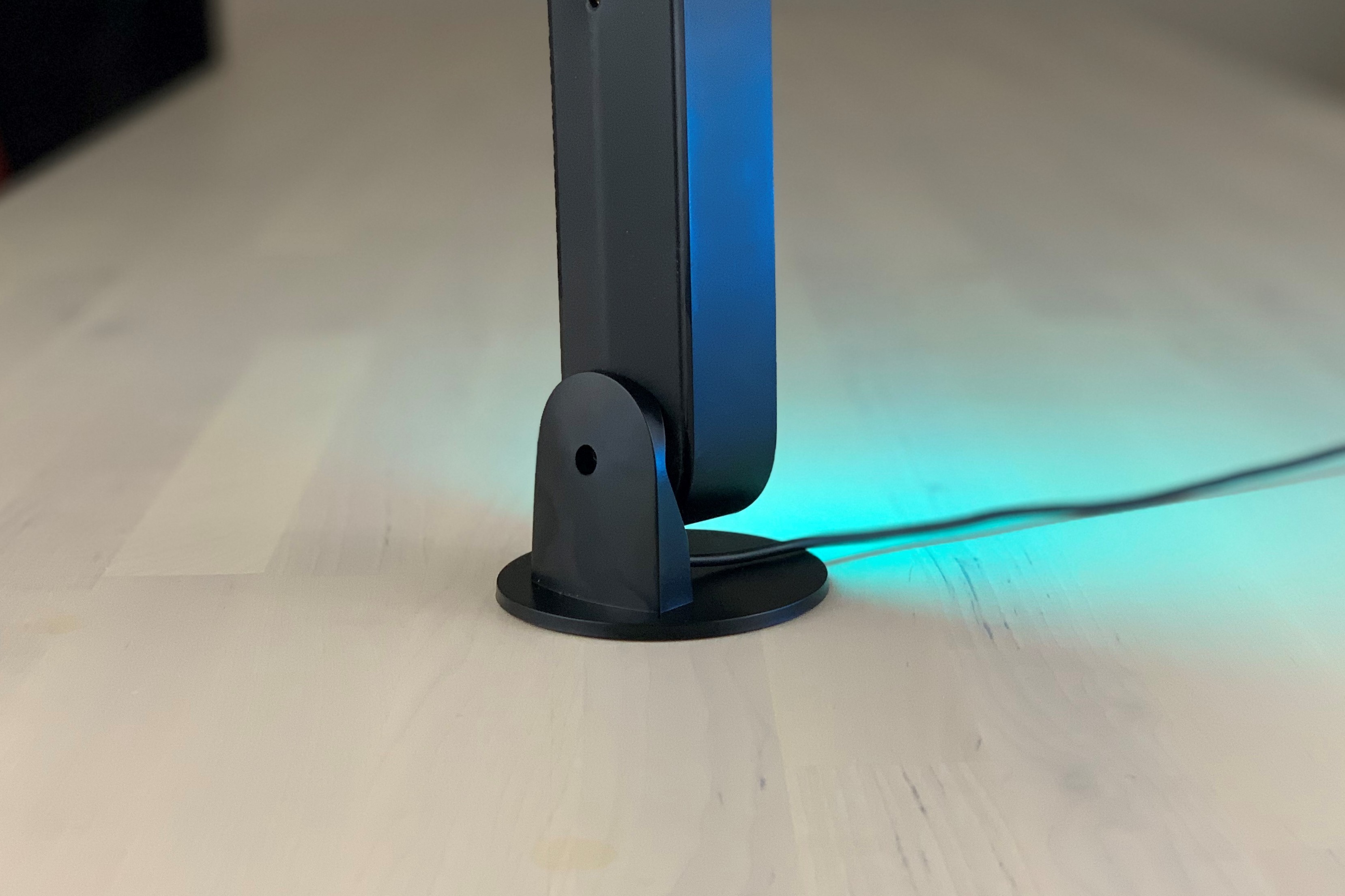 Using the light bars with your TV isn’t the only possibility. You can also put them behind your computer monitor (I used the vertical mounting brackets for that purpose), or artfully arrange them near any wall or surface that needs a bright swath of color.

Once you’ve arranged your Hue Play lights and plugged them in, you’ll need to connect them to your Hue Bridge, and then fire up the Hue app on your iOS or Android device. The app will prompt you to discover your new lights, and then step you through the process of creating a “Room” in which to place your lights.

After a little testing to ensure that each light is on the correct side in relation to each other, you’re ready to start playing with “scenes” (basically color and brightness presets) or “routines” (lighting arrangements based on the time of day, your arrivals and departures, timers, and other events) using the Hue app. If you have other Philips Hue smart bulbs in your home, you can add the Hue Play light bars to your existing scenes or routines.

While the Philips Hue Play light bars clearly have a variety of uses, let’s focus for now on how they function as bias lighting for a TV. For this particular setup, I set the light bars horizontally behind my set, which managed to throw a relatively large swath of light on the wall.

One option is to go with a basic, static bias lighting setup, without any fancy syncing colors. First, I borrowed the settings of the “Energize” Hue theme, a color and brightness preset that comes reasonably close to the 6500K color temperature recommended by video experts for TV bias lighting. (Anything much warmer or cooler than 6500K, which is a standard used across the video industry for what the color “white” should look like, can distort the colors on your screen.) Next, I swiped the brightness slider in the app all the way down, and then nudged it back up just enough to boost the apparent contrast on the screen without “crushing” black levels. 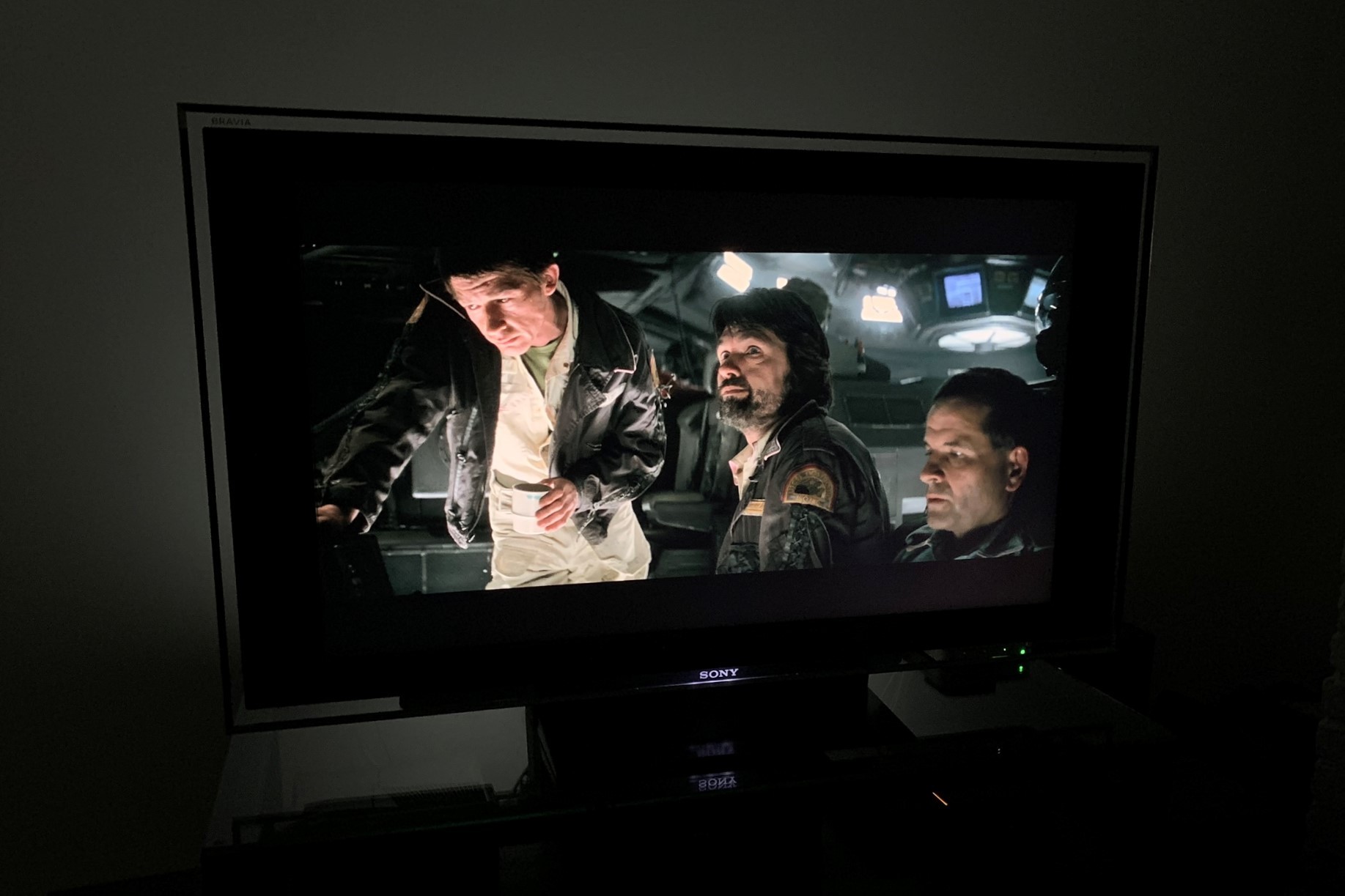 I renamed my new scene “TV Bias” and turned it on and off by flicking a virtual switch in the Hue app. If I had a Harmony universal remote with a Harmony hub (I have an older Harmony One IR remote), I could have integrated the Hue Play lights into one of my Harmony “activities.” That would be perfect for turning the light bars on whenever you tap “Watch Apple TV” on the remote, for example.

I also tried the Hue Play light bars with my 27-inch 4K PC monitor, and I liked them even more. For use with my PC, I used the included brackets to stand the lights up vertically, which makes for a much smaller footprint in the cramped area behind my display. The bias lighting scene I created for my TV worked nicely with my PC, but I also enjoyed syncing the lights with the images on my monitor, which I’ll describe in more detail in a moment.

Once all was said and done, using the Philips Hue Play light bars for static bias TV lighting looked pretty good to my eyes. The lights cast a soft, neutral tone on the wall that did a commendable job of keeping me from squinting at the screen, while also giving the black levels on my 10-year-old Sony Bravia TV a needed boost. After watching for a few minutes, I tended to forget the lights were there, yet I found myself missing them when they were off—always a good sign.

When I was finished watching TV, I used other Hue scenes—everything from the warm glow of “savanna sunset” to the cool shades of “arctic aurora”—to add an attractive glow on the wall behind my set, a nice change from the dark shadow cast by my 46-inch screen. As with other Hue-powered lights, you can set the Hue Play light bars to switch on and off based on a schedule, or whether you’re home or away. You can also control them with voice commands via Amazon Alexa, Google Assistant, or Apple’s Siri. 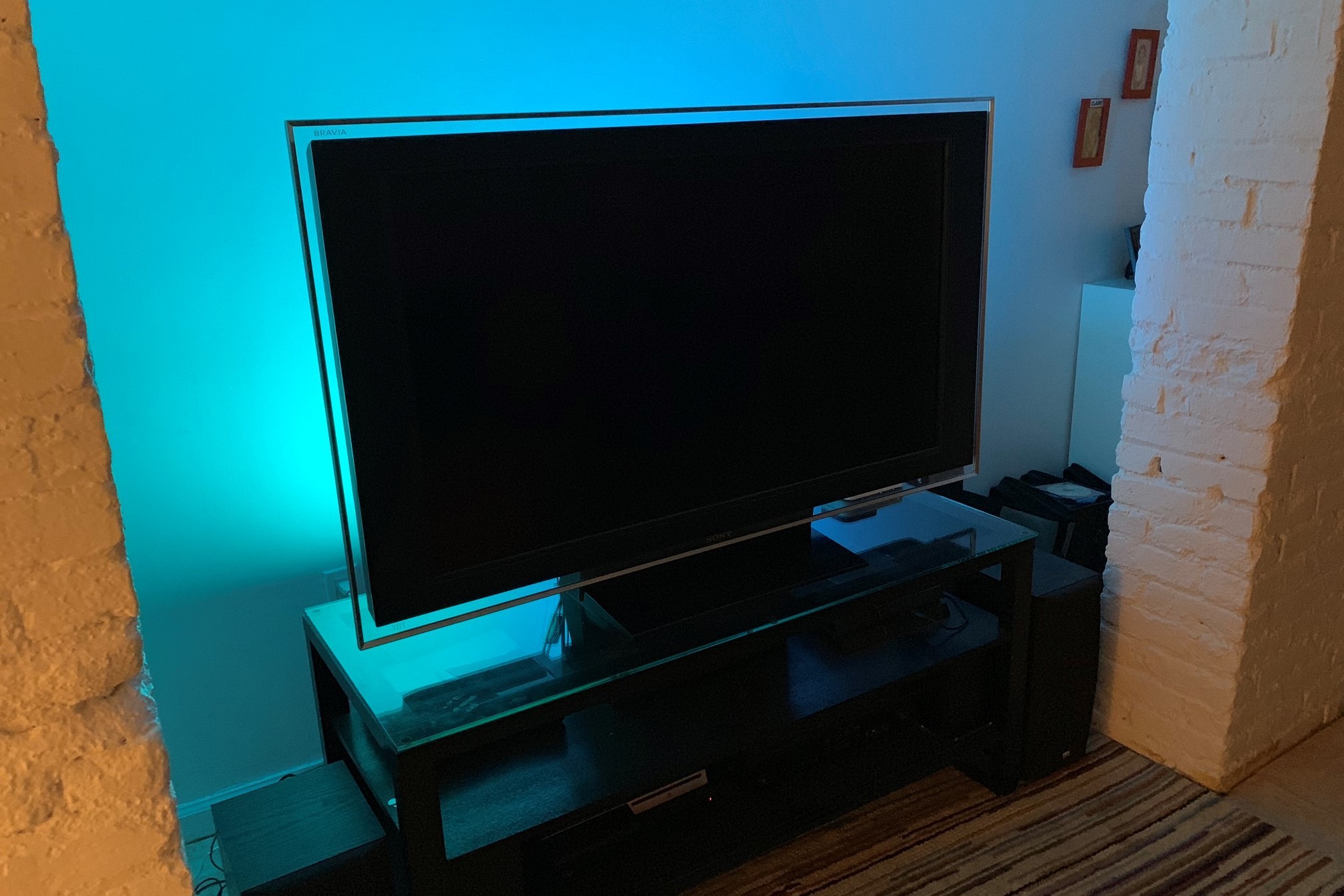 Philips Hue Play light bars are sort of capable of syncing with the colors on your TV screen, but you’ll need to jump through some hoops to make that work. You’ll first need to download the Hue Sync program to your laptop or desktop computer (both Windows 10 and macOS versions are available). You’ll then need to mirror whatever you’re watching on your computer onto your TV. It’s a cumbersome setup, to say the least, and I noticed a slight but distracting lag as the Hue Play light bars struggled to stay in sync with the colors on the screen. A setting in the Hue Sync desktop app helps to alleviate the lag somewhat, but I never warmed to the experience.

I got a much better result using the Hue Play light barss directly with my PC monitor, which eliminates the need to worry about mirroring your computer’s display; you just click a green “Start Light Sync” button and the lights begin to sync with the colors on your monitor. I found the effect quite soothing while I was browsing and working with Office apps, and watching Netflix on my computer screen was a lot easier than mirroring it on my TV, although I still found the lag to be distracting. 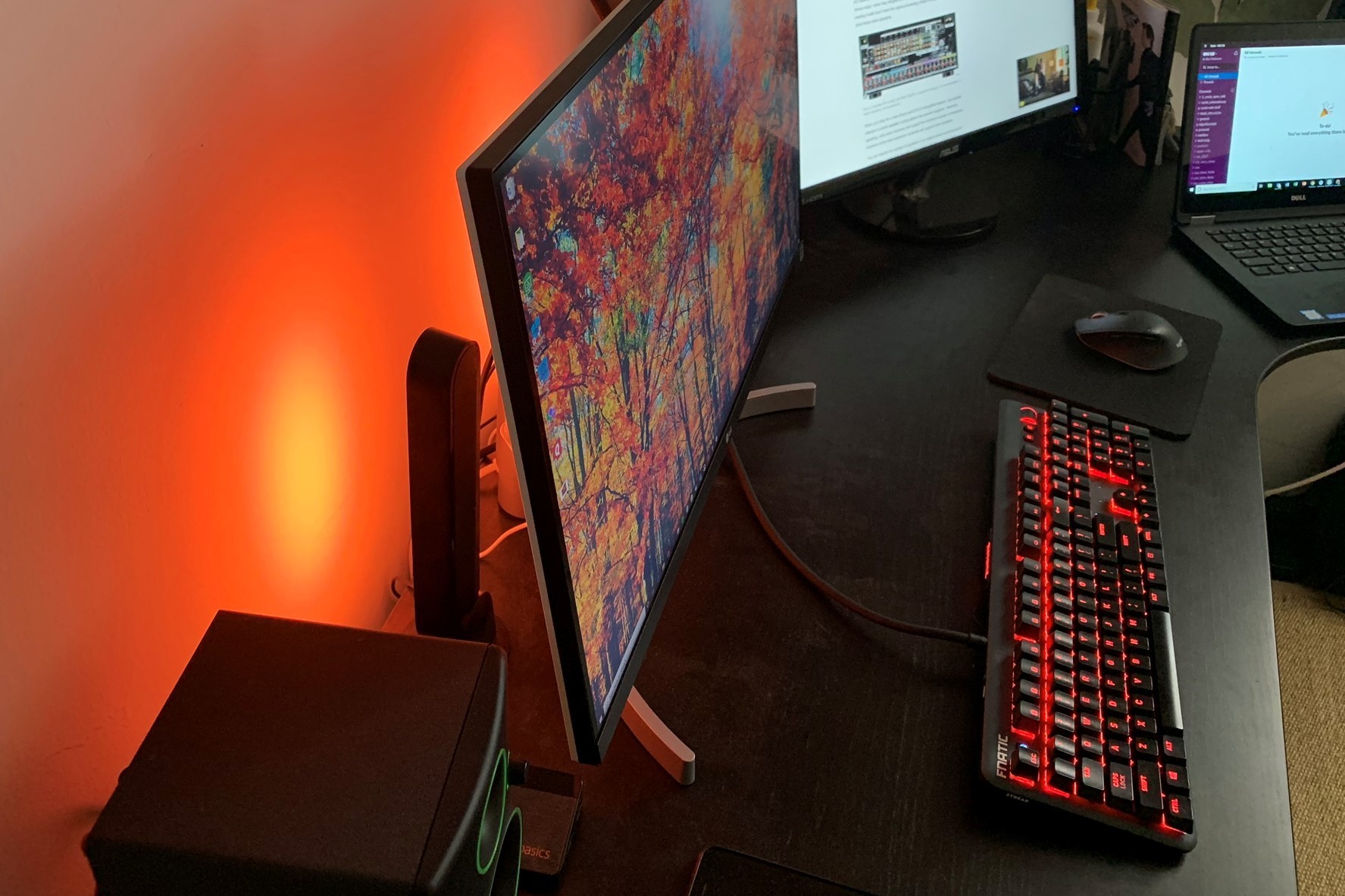 On the other hand, playing PC games with the Hue Play light bars is an immersive hoot. I got a huge kick out of blasting Dregs on Destiny 2’s Tangled Shore with my controller rumbling, my PC speakers cranked, and the Hue Play popping with every muzzle flash. And while the Hue Play lights were probably lagging a bit, as they did during my Netflix videos, I was too busy taking out Dregs with head shots to notice.

Fancy a light show to go along with your tunes? The Hue Play lights will also sync with your music, provided that you’re playing your songs, stations, or playlists on your PC.

The Philips Hue Play kit makes for a nifty, if expensive, way to add bias lighting to your TV or PC monitor. Easy to set up and ready to integrate with your other Philips Hue smart lights, the Hue Play’s attractive bias lighting can help improve your TV’s picture while easing eye strain, or you can use it in tandem with your computer display for synchronized lighting effects. You’ll need a Hue Bridge for the lights to work, however, while the Hue Play’s ability to sync with the TV in your living room is hobbled by its reliance on mirroring the image on your computer.

If you already have a Philips Hue Bridge, the Philips Hue Play makes for a nifty way to add bias lighting to your home theater setup, or (even better) as a responsive bias light for your computer monitor.

Don't miss a deal at Carphone Warehouse
Best offers at Farfetch
Discounts, Sales and Deals at Nike DE
Save your money with Brian Tracy
Online-Shopping with The Home Depot
Best products at Marks and Spencer
Latest Posts