Can Palicomp’s budget friendly Intel box keep up with the crowd?

As a non-Core Intel CPU, you’d expect the Palicomp Graphite’s Pentium Gold processor to be missing a little something – and you would be right. The chip has no Turbo Boost functionality, meaning that its 3.7GHz base frequency is also its maximum. The processor is also a dual-core design, although Intel’s Hyper-Threading technology allows it to run four simultaneous threads.

The CPU isn’t the only cost reduction choice Palicomp has made here. As with the considerably more expensive Dell Inspiron 3670, there’s only a mechanical hard drive for storage, and while the power supply claims to be a 500W model it lacks any PCI Express connectors for a future add-in graphics card. 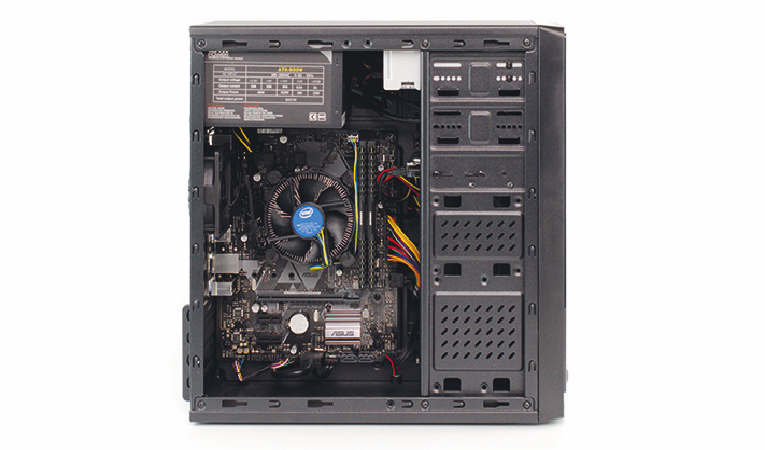 The case is functional; we welcome the inclusion of thumbscrews to remove the side panel quickly and easily, and also appreciate the three USB ports at the front of the chassis. The inclusion of a DVD-RW optical drive, capable of both reading and writing CDs and DVDs, is a nice touch, especially given the strict budget.

Less welcome is the Graphite Intel’s performance. Dropping down to a £300 price for a brand-new build, and don’t forget this includes a licensed copy of Windows 10 Home, was always going to be tough, and the Pentium Gold chip struggles with heavy workloads. Its performance in our benchmark tests pushes it towards the bottom of the figurative table.

General-purpose performance, however, is a different matter. Loading up the Speedometer 2.0 benchmark, which tests web application performance, has the Palicomp Graphite holding its own against competition twice its price.

What’s it like in real-life use? The Graphite handles web browsing easily and, once loaded, clicking around basic applications such as OpenOffice (included alongside AVG AntiVirus as part of a free software bundle) doesn’t feel slow, but the mechanical storage means it takes some time to open each application.

Palicomp is confident in the quality of its build: it offers a three-year return-to-base warranty as standard, with parts and labour covered in the first year. If you’re on a tight budget, it’s a surprisingly good choice.

Don't miss a deal at Sephora
Best offers at EBay DE
Discounts, Sales and Deals at The Home Depot
Save your money with Ticketmaster UK
Online-Shopping with Currys
Best products at Vimeo
Latest Posts