Colourful and capable, the Titan Falcon is a very good-value Ryzen 7 system

The Titan Falcon is a prebuilt PC that takes advantage of AMD’s brilliant 2019 output, with a Radeon RX 5700 XT graphics card and a Ryzen 7 3700X as the CPU. This octa-core chip also comes overclocked to 4.2GHz, up from its 3.6GHz base speed.

This performance is at first outshone by one of the most rainbow-heavy RGB settings we’ve ever seen. The case, the GPU, the motherboard and RAM sticks are all equipped with full-spectrum RGB lighting that gently but vividly rotates through different hues.

This is a bold design choice, which won’t be to everyone’s tastes. It’s not an ugly PC: we like how the white interior chamber contrasts with the black exterior, and the tempered glass side window adds class even as several million LED colours are beaming through it.

The lack of an exhaust fan is unusual. There’s a single 120mm case fan at the front, for introducing cold air to the system even if nothing is dedicated to venting it out, but it’s positioned so low that the airflow is directed straight under the graphics card. The CPU cooler, a middle-sized air cooler, also has a lot of work to do with an overclocked processor on its hands.

Thankfully, there was no evidence of overheating or throttling in our performance benchmarks. The Ryzen 7 3700X, together with a healthy 16GB of RAM, scored 186 in the image test, 322 in the video test and 401 in the multitasking test, for a very strong 339 overall.

Compared to the CCL Paladin, which has the same CPU but runs it at stock speeds, the Titan Falcon’s overclock produces more of a modest improvement than a great one: its image test score was a few points lower in exchange for its video, multitasking and overall scores all being a few points higher. A win is a win, however, and while this particular chip doesn’t have a lot of overclocking headroom, the Titan Falcon demonstrates that gains can be made.

The boosted clock speed also appears to help out in games, but while the Titan Falcon performs better than the Paladin – which again has a matching component in the RX 5700 XT–it’s only by a practically invisible number of frames per second, usually between one and four. Regardless, this is good GPU performance for the money: Dirt Showdown managed a velvety 186fps at 1,920×1,080, only dropping to 181fps at 2,560×1,440 and 115fps at 3,840×2,160.

A score of 100fps at 1080p in Metro: Last Light Redux is nothing to be sniffed at either, and the Titan Falcon’s 60fps at 1440p shows how well it can handle tough games at high resolutions. 4K is too high to continue using the best possible settings, with the frame rate falling to 26fps, but the usual trick of disabling SSAA bumps this all the way up to 53fps. 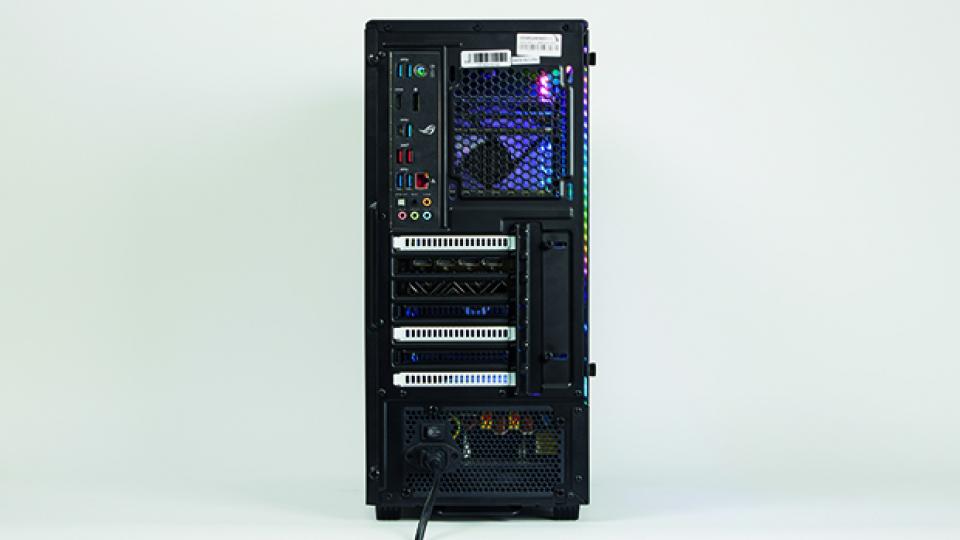 It also aced the SteamVR Performance Test, scoring 11, so there’s no doubt this is a fine PC for high-end gaming, especially if you want to keep below the £1,500 mark. The CCL Paladin is £275 more expensive, so the Titan Falcon beats it on value as well as pure performance.

That said, one of the Paladin’s biggest strengths was its superior storage: a massive 1TB NVMe SSD alongside a 2TB hard disk. The Titan Falcon takes a more economical route, with a 500GB SSD – this occupies one of the two M.2 slots, but only runs at SATA speeds – and a 1TB hard disk. As such, it doesn’t come close on capacity, and SSD speed is well behind: we measured a sequential read speed of 427MB/s and a write speed of 435MB/s, both less than one-fifth of the Paladin’s speeds.

At the same time, this dual-drive setup is decent enough for everyday use. You could also add a faster NVMe drive in the future, via the second, spare M.2 slot. There are also a couple of empty 2.5in and 3.5in drive bays apiece, although one of the latter is already occupied by the 1TB hard disk.

For other potential upgrades, there are two empty PCI-E x16 slots and one PCI-E x1 slot; there are actually three of these on the motherboard, but two are obscured by the graphics card. You can install x1 devices in the x16 slots, and with two spare RAM slots, there’s room for extra hardware where it counts.

The motherboard also contributes a nicely equipped rear I/O panel, which offers five USB3 ports, two USB3.1 ports and a USB Type-C port, not to mention S/PDIF and C/SUB audio outputs for hi-fi speakers. There’s no integrated Wi-Fi but Gigabit Ethernet is included, as is a legacy PS/2 port and – a few inches downwards – two HDMI and DisplayPort outputs apiece, courtesy of the graphics card. That’s a good range overall.

Previous ArticleIs a radical design change coming for the iMac?
Next ArticleBenjamin Moore's ColorReader can match your paint with your shirt
Comments (0)

Don't miss a deal at The Home Depot
Best offers at John Lewis
Discounts, Sales and Deals at Nike DE
Save your money with Carphone Warehouse
Online-Shopping with Ancestry
Best products at Groupon
Latest Posts