OnePlus can be funny. Sometimes, the company reveals top-notch smartphones with minor flaws. Other times, new devices land with new features that were a flop. The 6T I reviewed earlier this year is a prime example of the latter: OnePlus’ first in-display fingerprint reader wasn’t very responsive, and even though I was a fan of the dewdrop-notch design, the phone’s selfie camera often took blurry shots.

Today, OnePlus makes another attempt, and it’s more ambitious than ever. For the first time, the company is releasing two flagship models simultaneously: the OnePlus 7 and the larger OnePlus 7 Pro. I’ve spent the last five days living with the $749 maxed-out OnePlus 7 Pro (with 12GB of RAM and 256GB of storage), and yes, with its $669 base price, it’s the most expensive phone ever from the company. Still, this is easily my favorite OnePlus phone to date, and if all goes well, it may even end up being my favorite smartphone of the year.

OnePlus reversed most of its mistakes with the 6T and brought out a surprisingly ambitious OnePlus 7 Pro, packing several rare components that barely anyone else has procured. The result is a beast of a device that delivers fantastic mobile cinematic plus gaming experience, and one that’s in a well-designed package.

Both phones join the growing crowd of powerful Snapdragon 855-based devices, and to my surprise, these are the first non-Samsung phones to pack speedy UFS 3.0 storage chip, too. We’re talking about doubling the transfer speeds, here, which is a major advantage over most smartphones. They also feature a pair of stereo speakers with Dolby Atmos, along with a larger and faster in-display fingerprint sensor. Thankfully, the three-stage alert slider and Warp Charge — OnePlus’ low-voltage fast-charging tech — are here to stay.

The OnePlus 7 Pro has the same excellent build quality and a similar design to recent predecessors. But, for a $600+ phone, I wouldn’t expect anything less. This variant is available in Mirror Gray, Almond and Nebula Blue options; it’s also the one that I’ve been using. I’m a sucker for its frosted glass back, which feels as smooth as OnePlus’ earlier “baby skin” texture. The gradient blue paint job underneath the glass gives a nice shine at different angles, too. While the OnePlus 7 Pro weighs a little over 200 grams, it didn’t feel that much heavier than the 185-gram 6T (the smaller OnePlus 7 weighs 182 grams). The phone also comes with a clear soft silicone case, which means I can still show off that fancy color while keeping it protected. 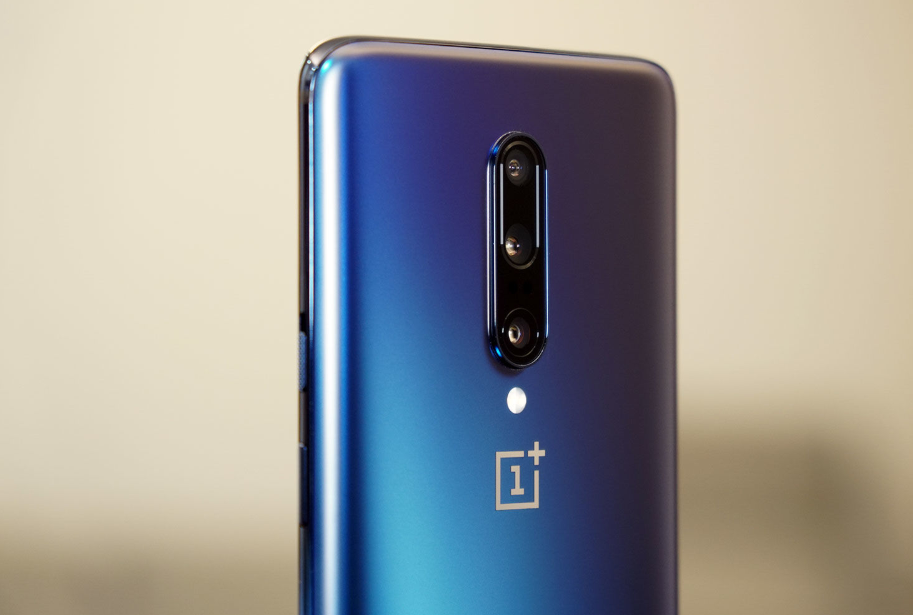 The main difference between the OnePlus 7 Pro and the 6T is that the notch camera has been replaced by a pop-up camera with a new 16-megapixel sensor, meaning OnePlus finally has a true all-screen smartphone. The pop-up mechanism has apparently been tested to withstand over 300,000 movements, which should last for well over five years of heavy use, even. Just to be safe, this camera is also able to retract automatically when the phone detects a fall. My only concern is how much dust — and potentially liquid — could get trapped in this compartment over time.

On the back, the OnePlus 7 Pro has a triple camera instead: There’s a 48-megapixel f/1.7 main camera (with optical stabilization), along with an 8-megapixel f/2.4 3x-zoom telephoto camera and a 16-megapixel f/2.2 ultra-wide camera. More on that later.

Another main selling point of the OnePlus 7 Pro is its Fluid AMOLED panel. With this, OnePlus is finally pushing into the QHD+ (3,120 x 1,440) resolution on a 6.67-inch curved screen (though the smaller 7 packs the same 6.41-inch 2,340 x 1,080 AMOLED screen as the 6T). The Fluid part refers to the screen’s 90Hz refresh rate, which makes everything you do look silky smooth — be it gaming, watching video or just general scrolling around. 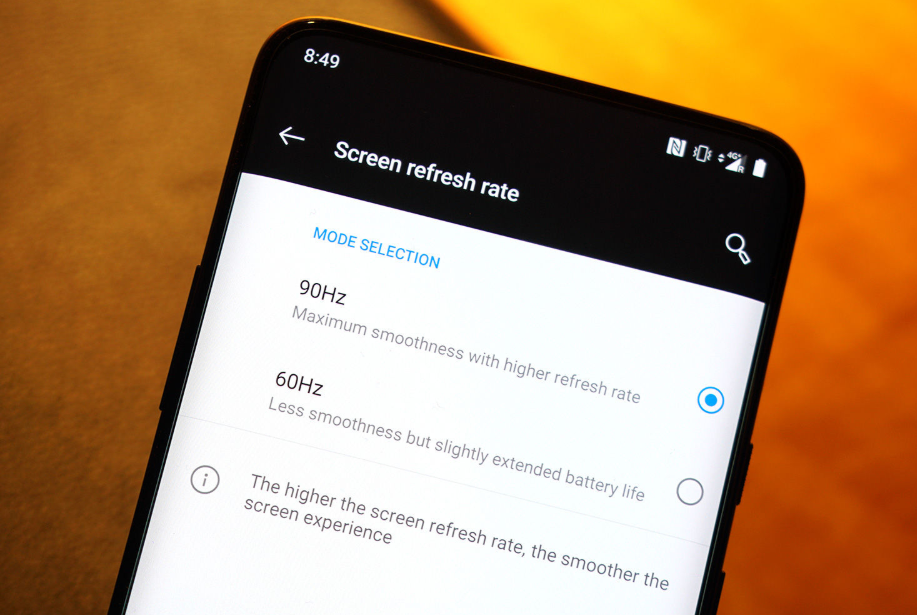 Yes, we’ve already seen 90Hz AMOLED screens on niche devices like the ASUS ROG Phone and the Nubia Red Magic 3, but the OnePlus 7 Pro’s is the first to go beyond 1080p resolution. Once I got used to this, I felt odd whenever I switched back to older phones — they definitely felt laggy.

The OnePlus 7 Pro’s AMOLED screen supports HDR10+, which goes well with the surprisingly immersive Dolby Atmos stereo speakers. I’ll confess: This combination has improved my viewing experience so much that I’m catching up on HDR shows like Altered Carbon and Stranger Things on this phone.

As with earlier models, the OnePlus 7 Pro feels slick thanks to OnePlus’ excellent Oxygen OS (based on Android 9 Pie) — more so with the silky smooth Fluid AMOLED screen. The in-display fingerprint unlock is also much faster than before, and it beats the one on the Huawei P30 Pro. 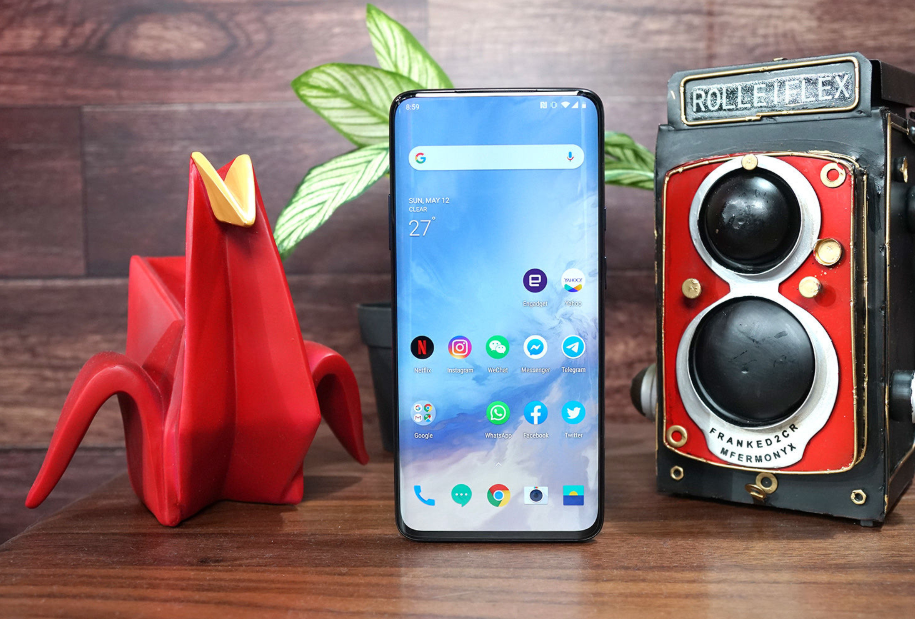 I haven’t experienced any crashes or sudden resets on my OnePlus 7 Pro over the last week, and its 4,000mAh battery has usually lasted me for over 12 hours per charge with normal use — that’s included taking dozens of photos with the cameras, some Netflix streaming over WiFi and 4G and general browsing around Facebook and Twitter. Compared to the eight to 10 hours I got on my earlier phones, this is solid.

The OnePlus 7 Pro also comes with a 30W Warp Charge adapter, and it’s noticeably faster than its 20W predecessor — it takes just one hour to fully charge the phone, thus saving me about 25 minutes. Warp Charge is particularly useful when I need an emergency charge (like when I forget to charge my phone overnight; we’ve all been there) — an eight-minute charge can already get my dead phone up to 20 percent.

Despite this lightning-fast speed, the phone doesn’t heat up as much as you’d think, because Warp Charge (which is basically Oppo’s VOOC tech) is designed so most of the heavy lifting is handled by the charger. That said, the charger doesn’t get hot, either. One personal pain point I had with the 6T was its weak haptic vibration — so weak that even without putting a case on the phone, I kept missing calls unless I was wearing a smartwatch. It’s unclear how many others complained about this, but it must have been a big enough issue to prompt OnePlus to fix this on the OnePlus 7 Pro. And so far, so good: I don’t think I’ve missed any calls yet thanks to the stronger vibration. As a bonus, this motor also offers crisper tactile feedback, which makes typing feel great. (Sadly, the OnePlus 7 doesn’t use this new vibration motor.)

So what is the OnePlus 7 Pro missing? As usual for OnePlus, there’s no microSD expansion, but you do get dual Nano SIM slots. There’s also no 3.5mm headphone jack nor a USB-C adapter in the box, but OnePlus does want you to consider buying its new Bullets Wireless 2 Bluetooth earphones. Unlike their predecessor, these new ones feature triple drivers — two balanced armature drivers and one moving coil on each side, and they sound great. At $99, it’s understandably much more expensive than the $69 OG earphones, but I think it’s still priced competitively given the audio performance. They also support Warp Charge, which offers 10 hours of listening time with just a 10-minute charge.

In terms of photography, the main camera on the OnePlus 7 Pro handles HDR shots much better than the 6T. In general, it produced a more accurate white balance while tightening highlights and shadows. In particular, the OnePlus 7 Pro did well with greenery subjects, while the Huawei P30 Pro’s comparison shots looked washed out, and the iPhone XS Max’s photos seemed less authentic to what I saw.

Night shots looked clean and accurate, too, partly thanks to the pixel-binning method applied to the main 48-megapixel sensor, and partly thanks to the optical stabilization on both the main camera and telephoto camera. I was also able to take some nice close-up shots of some busy bees using the Pro mode. As for video, my 4K 60fps clips look stunning when played back on this QHD+ Fluid AMOLED screen. 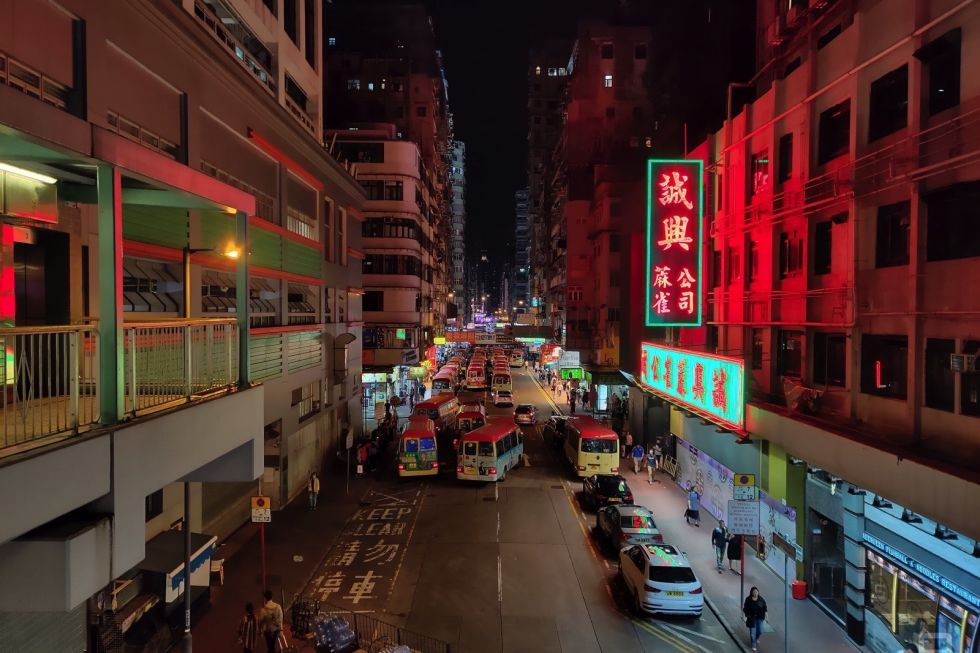 That said, I did notice a slight loss in detail compared to my 6T daytime shots, especially text on distant billboards. This is likely the downside of pixel-binning. It should also come as no surprise that the Nightscape mode on the OnePlus 7 Pro is still no match to Huawei’s Night mode and Google Pixel’s Night Sight, but unless you’re in a pitch-black room, the OnePlus 7 Pro’s normal camera mode should do the job.

As for the front camera, I’m happy to report that my selfies, here, are much better than what I got on the 6T. I can now confidently take selfie shots without having to worry about blurriness. But, of course, if you find this new camera shows a little too much detail, there’s always beautification mode to the rescue. 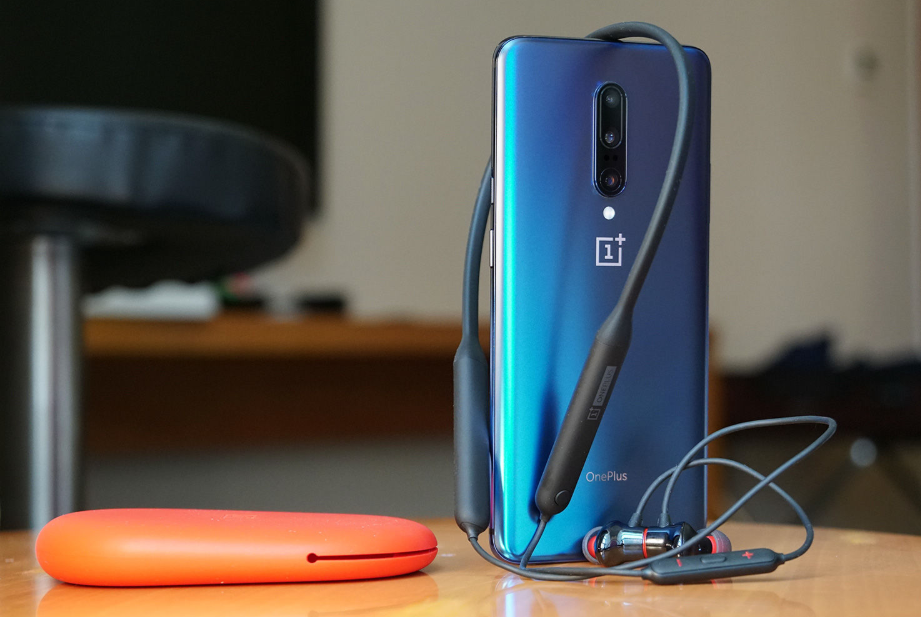 It’s hard to find major faults on the OnePlus 7 Pro. The company took a risky approach, packing in advanced components to help it stand among, if not stand out against, all the other flagship smartphones. Very few others have the same 90Hz AMOLED screen or speedy UFS 3.0 storage. Most importantly, the OnePlus 7 Pro’s cameras are comparable to those on other flagships. That said, it faces the threat of Huawei’s (still pricier) P30 Pro (from $599) which offers 10x hybrid zoom plus an AI-enhanced Night mode. On the other side, Google’s cheaper Pixel 3a devices (starting from $399) offer almost the same superb main camera as their flagship counterpart for even less money than either of the OnePlus 7 devices.

I reckon folks who are already using a 6T will want to jump straight to the OnePlus 7 Pro. But for everyone else, if budget is a concern, there is the slightly cheaper OnePlus 7, which is effectively a new and improved 6T, but it’ll only be available in Europe and Asia. For those who have the money, OnePlus hopes they will bite at that silky smooth screen, a truly unique feature that goes well with OnePlus’ famously slick software. Even with a higher price than its predecessors, the OnePlus 7 Pro is still hundreds of dollars cheaper than a lot of the competition, and let’s face it, there aren’t many phones with this price-to-performance ratio.

Update 5/14/19 2:20PM ET: This article has been updated to reflect that the Bullets Wireless 2 earphones have triple drivers instead of dual drivers on each side.

Don't miss a deal at Brian Tracy
Best offers at House of Fraser
Discounts, Sales and Deals at EE Mobile
Save your money with Farfetch
Online-Shopping with Ancestry
Best products at The Home Depot
Latest Posts