Everything you could possibly want to know about the OnePlus 3, including the latest news, specs and rumours

The key to OnePlus’ success is gloriously simple: it delivers premium smartphones for half the price of its rivals. Now it’s set to do it all again with its fourth phone, the OnePlus 3, in 2016.

Your name’s not down you’re not coming in. Oh, wait! Come back! Everyone’s on the guest list! Unlike OnePlus’ previous launches, this time around you won’t be left fighting for an invite or dashing to a flash sale: the OnePlus 3 sees the company abandon its invite-only model for good. Of course, there’s every chance the OnePlus 3 will sell out within a few hours of its release, but this time you shouldn’t be kept waiting months before you can get your hands on one.

Thanks to a post on OnePlus’s Weibo account, we now know the official date for certain: it’s 15th June. Or at least it is if you’re in Shenzhen or the UK: the launch is at 10am on the 15th June in Shenzhen, or 3am if you’re in the UK on BST. If you’re running on EDT or PDT, however, the OnePlus 3 will launch at 10pm and 7pm respectively.

Can’t wait? No problem. OnePlus has launched The Lab, a new crowd-sourced testing program, with which it’s hoping to get early feedback on the OnePlus 3. OnePlus is “enlisting the help of the community to provide fair, honest, crowd-sourced feedback on the OnePlus 3. You will put our new flagship to the test in a momentous effort to create a comprehensive community review.” Which is pretty darn awesome, basically.

The only downside is that there are only 30 spaces going, and so far 7,708 people have already signed up. Are you feeling lucky? Then click here to head on over and grab your place. 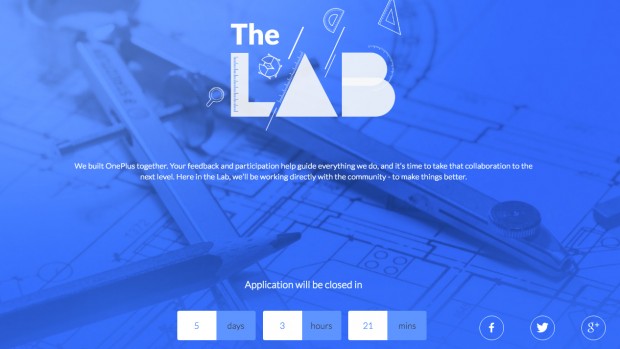 “The OnePlus 3 will launch on the 15th June-in OnePlus’ virtual reality space station, The Loop.”

OnePlus is quite clearly trying to make this its biggest launch yet. It took everyone by surprise by announcing that it was giving away 30,000 free VR headsets (which, sadly, have since sold out.) It turns out however that the newly-announced OnePlus VR headset, the Loop VR, is an integral part of the OnePlus 3’s launch: the OnePlus 3 will follow in the OnePlus 2’s giant footsteps by conducting its launch event in a virtual reality space station, The Loop.

GizmoChina reports that the OnePlus 3-or at least the lower-specced of the two forthcoming models, equipped with 3GB RAM and 32GB storage-will be selling in the US for $310, which is 215 pounds in real money. The model with 4GB RAM and 64GB storage is reported to come in at $385 or 267 pounds.

Whichever way you cut it, that’s dramatically cheaper than any other flagship phone on the market. Unless OnePlus makes any serious missteps with the hardware or software, the OnePlus 3 is set to cause some serious upsets in the high-end smartphone space. 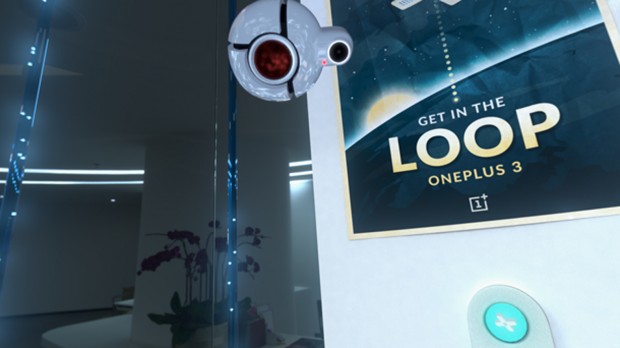 While quite a few of the fake design renders for the OnePlus 3 look pretty lovely, the actual thing may possibly be a little less exciting. Twitter user The Malignant claimed to have pictures of an early prototype model. However, he claims that the rear of the phone isn’t pictured as it’s “not the retail shape”. If these shots are real, then we can now finally confirm that the OnePlus 3 is, erm, a phone. And a fairly uninteresting looking one at that.

Still, you can see the rumoured USB Type-C port as well as the all-new fingerprint scanner. 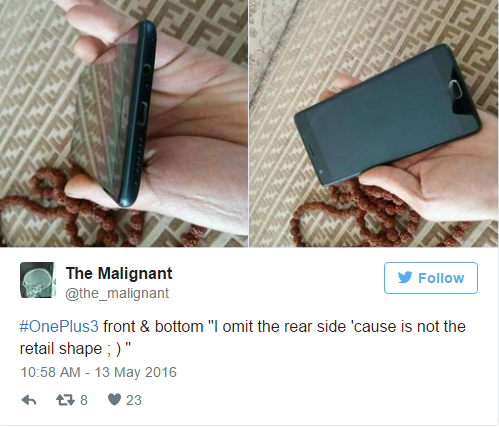 However, another leak on Twitter suggests that the OnePlus 3 may not be such an ugly duckling after all. Evan Blass has a track record of picking up some pretty tasty leaks, and this time he’s snagged what looks like a press shot for the OnePlus 3. At first glance this looks nothing like The Malignant’s shots, but closer inspection reveals an identical design along the bottom edge, with a series of milled holes, a USB Type-C port and a headphone port flanked by two further holes, one of which we presume is a microphone.

It also looks MUCH slimmer, but the angles of the press shot have been carefully tailored to not give away the phone’s width. I suspect that, much like the HTC 10, the OnePlus 3 will be a touch more chunky than some of its rivals. That said, it looks much, much nicer with the silver metal edges. Figners crossed that this is what we’re going to get. 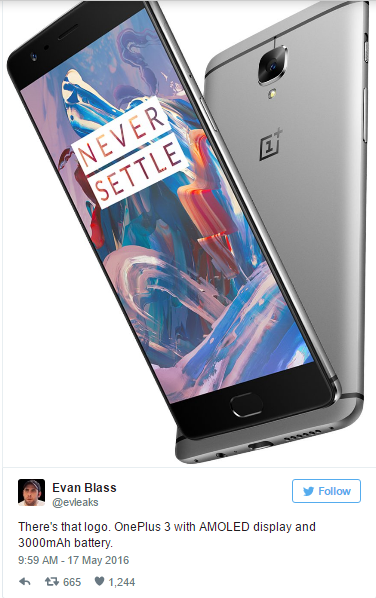 The first alleged design renders of the OnePlus 3 appeared online in late 2015, and the same source confirmed the-admittedly unsurprising-detail that the phone would be powered by Qualcomm’s Snapdragon 820 chipset.

It turned out, however, that the renders weren’t official hardware at all. In fact, they were created by the rather talented Mladen over at designedbyhege.wordpress.com-a site that mocks up imaginary forthcoming smartphones purely for the fun of it. They are rather pretty, though. 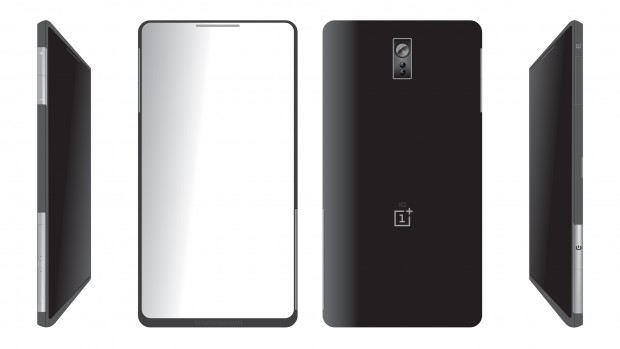 Similarly, a video trailer for the OnePlus 3 surfaced in December 2015, but although some sites also tried to pass this off as a leaked trailer, it was nothing of the sort. Again, this was the work of one clever individual, entirely unaffiliated with OnePlus, called Jermaine Smit. Check out his impressive handiwork below. 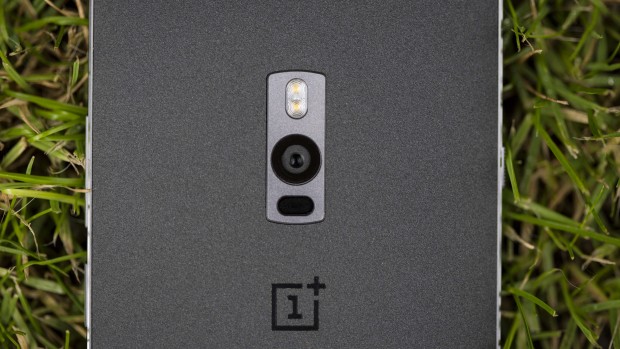 Details of the OnePlus 3 have been surfacing online, thanks to a couple of benchmarking reports that hint at two variants of the handset-one of which looks to have 6GB of RAM.

Previously, a version of the OnePlus 3 was seen on both AnTuTu and GFXBench. This model listed a Snapdragon 820 processor, a 5.5-inch display, 64GB storage and 4GB RAM.

There now looks to be at least two variants of the OnePlus 3-The A3000 and the A3003. According to Geekbench, the A3000 model comes with 6GB RAM. The AnTuTu and GFXBench listings alternatively claim the phone has 4GB RAM, suggesting the Geekbench testing occurred on a different variant of the OnePlus 3.

In terms of raw performance, the Snapdragon 820 is a big, big step forward. You can click here to read our full review of the hardware, but it’s safe to say that it offers a dramatic improvement across the board.

“There’s much more to Snapdragon 820 than just performance, however.”

There’s much more to Snapdragon 820 than just raw performance improvements, however. It promises to be 30% more efficient than the previous generations, and image and video processing capabilities are dramatically improved, too.

Chinese site, MyDrivers.com, has also reported that its sources are claiming that the OnePlus 3 is going to have a chunky 3,500mAh battery pack, which bodes well for battery life.

Add in a new modem component that supports the latest high-speed mobile networks, and support for the as-yet unratified 802.11ad Wi-Fi standard, and there’s plenty to get excited about.

Elsewhere, you can expect OnePlus to deliver a balance of features that keep pace with the premium smartphone pack. A 16 megapixel rear camera buddies up with an 8 megapixel front snapper, and it’s pretty much certain that the OnePlus 3 will be equipped with a Full HD Super AMOLED screen-an entirely sensible choice, both for overall performance and battery life.

And given Samsung’s decision to reinstate microSD in its forthcoming Samsung Galaxy S7 phones, it wouldn’t be at all surprising to see OnePlus go one step further and throw in a removable battery and microSD slot. We can but hope.

Previous ArticleHands on: Asus ROG GX800 review
Next ArticlePhilips' new bulbs use 'every shade of white light' to help you sleep
Comments (0)

Don't miss a deal at Groupon
Best offers at O2 Mobile
Discounts, Sales and Deals at Ancestry
Save your money with EBay DE
Online-Shopping with Udemy
Best products at Vimeo
Latest Posts