Over the last four years, the Nvidia Shield TV established itself as a great streaming video player for geeks. While it didn’t have the polish of an Apple TV, Fire TV, or Roku player, it offered a lot of neat features for power users, such as the ability to use it as a Plex server or—with an inexpensive dongle—even a smart home hub.

Now, Nvidia has updated the Shield TV with a new design, a lower starting price, a much better remote, and a genuinely impressive AI upscaling feature that sharpens HD videos on 4K TVs. At $150, it’s still an expensive media streamer, but the new features should make it attractive even to non-nerds.

Still, some signs of the Shield’s inner geekiness remain. Getting the most out the Shield TV requires some poking around through menus, and the underlying Android TV software continues to feel like a work in progress. Though it’s easier to recommend to a wider audience than the old Shield was, it’s not a clear winner over other high-end streamers including the Apple TV 4K, Fire TV Cube, and Roku Ultra.

The new Nvidia Shield TV comes in two forms, but both feature the same updated CPU, the Nvidia Tegra X1+. More on that in a bit.

The $150 version reviewed here is a tube of gray plastic measuring 6.5 inches long and 1.57 inches in diameter. There’s an HDMI port and a microSD card slot on one side, and a power connector and ethernet jack on the other. It also has a button that triggers a sound on the remote to help you find it. Inside, there’s 8GB of storage and 2GB of RAM. 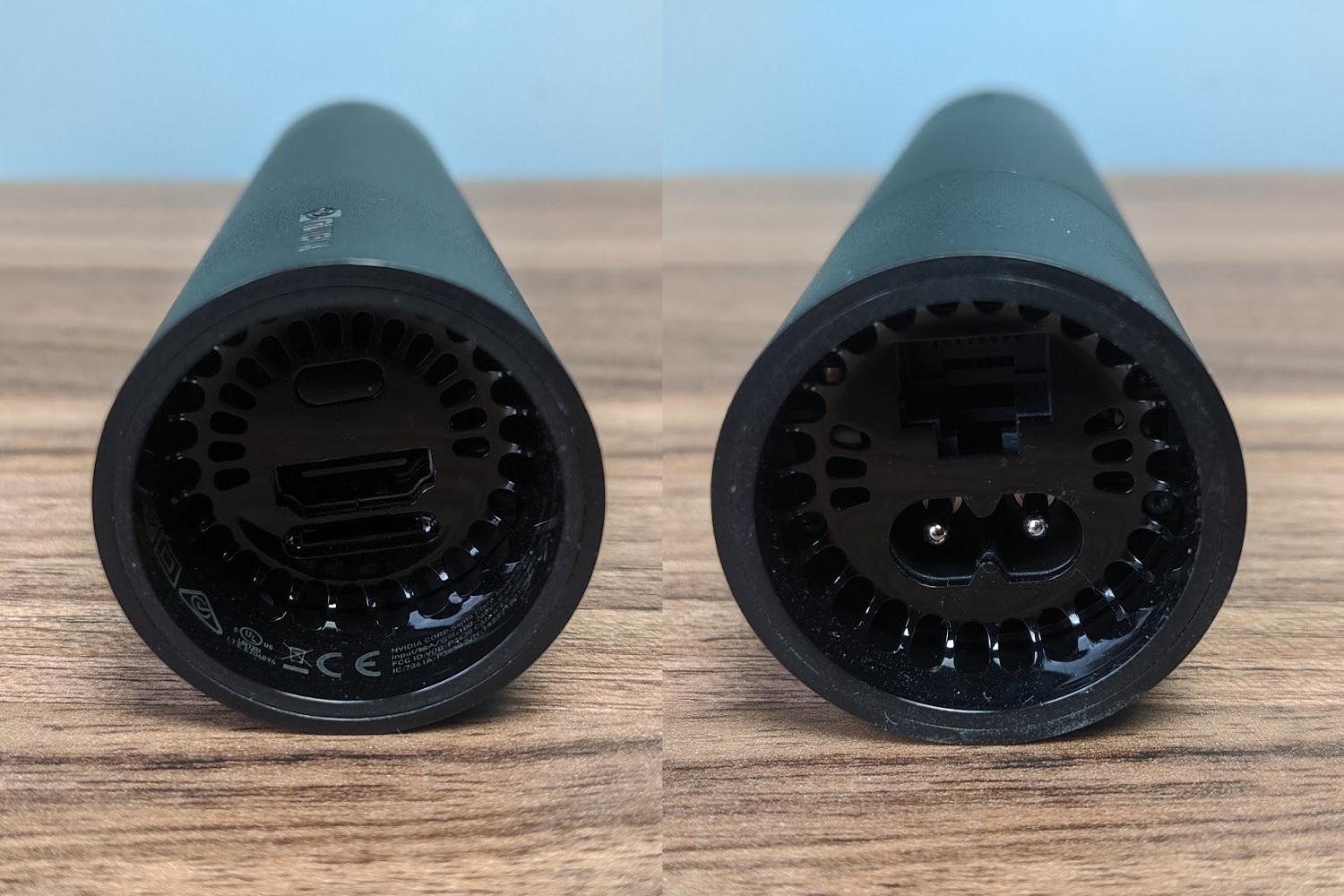 According to Nvidia, the tubular design is meant for laying on the floor alongside your other A/V cables, but I’m not sold on the idea. Hiding the Shield out of reach could hinder Wi-Fi reception and keep you from using the device’s remote-finder button, but placing the tube out in the open just looks awkward, with cables sticking out of both ends.

If you prefer the Shield’s old rectangular design, it still exists in the new Shield TV Pro ($200 at Amazon). It doesn’t have a microSD card slot or a remote-finder button, but it does have a pair of USB ports for connecting external hard drives, game controllers, TV tuners, or other accessories. It also has more storage and RAM than the tube: 16GB and 3GB respectively, matching the previous-generation Shield TV box. As such, it’s the only one of the two models that can double as a Plex server, SmartThings hub, or an over-the-air DVR.

In both cases, you’re getting a device that can stream in 4K HDR, with both Dolby Vision HDR and Dolby Atmos audio decoding. The former can optimize the more vibrant colors of HDR video on a scene-by-scene basis, while the latter finally allows for object-based soundtracks in Netflix. Unfortunately, Nvidia skipped out on supporting HDR10+, the non-proprietary alternative to Dolby Vision that’s mainly available in some Amazon Prime videos, and it doesn’t support YouTube videos in HDR.

Performance was never an issue with the previous Shield, which even today holds up as one of the fastest streaming boxes on the market. Nonetheless, Nvidia has upgraded the new Shield with a Tegra X1+ chip that’s 25 percent faster. The speed increase isn’t really noticeable in everyday use, but it’s necessary to power a the new Shield’s AI upscaling.

This feature solves a real problem with streaming video today: Even on a 4K TV, most content still streams in 1080p or 720p, so you’re seldom making the most of the fancy panel you paid for. While most televisions have their own basic upscaling algorithms that can fill in some details in non-4K content, Nvidia went a step further by training a deep learning model to predict the difference between upscaled and actual 4K content. This model then runs in real time on the Shield, where it tries to fill in the quality gaps based on what it’s learned. 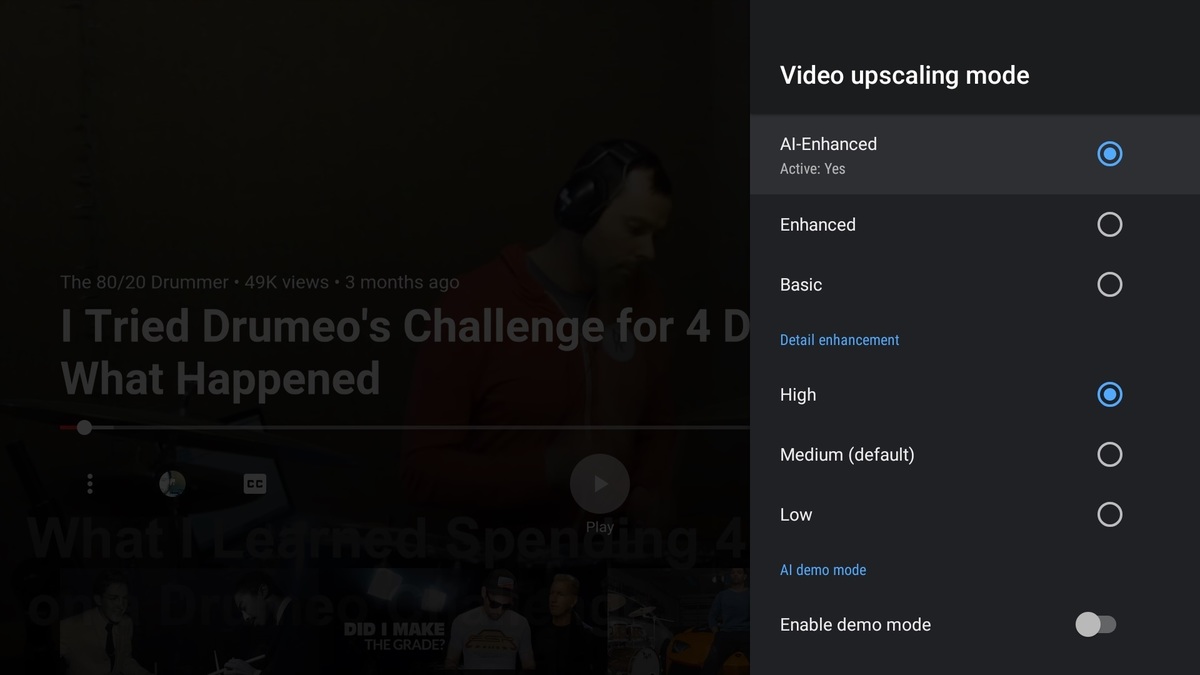 In practice, this means that edges become sharper, face details become less blurry, and strands of hair become more defined. Nvidia is proud to show off the tech as well, including a “demo mode” that lets you toggle the AI mode or view it side-by-side with traditional upscaling. Going back and forth, the difference is often obvious, especially if you’re somewhat close to the TV or viewing 720p content on YouTube. Video purists can make the upscaler less aggressive or disable it entirely, but I never found this to be necessary.

The technology quickly won me over, but I wish it worked with more types of content and in more ways. As of now, it can’t upscale 60-frames-per-second video such as live sports, nor can it convert standard dynamic range content to HDR.

Thank goodness, they fixed the remote

The other major improvement in the new Shield TV is its remote control. Gone is the previous Shield’s overly slim profile that easily slipped between couch cushions; in its place is a triangular design that’s comfortable to grip and has some heft. 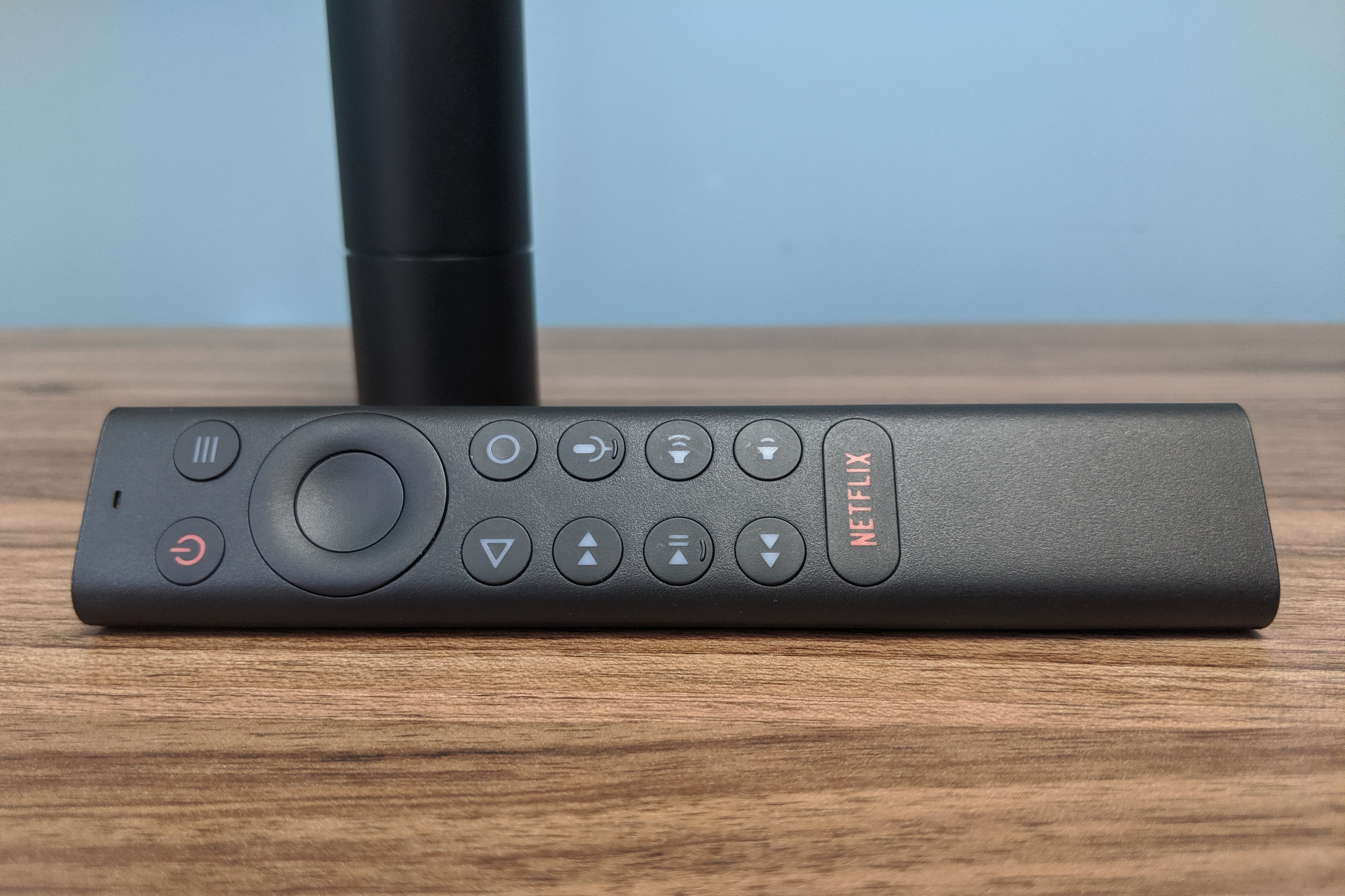 Even better, Nvidia ditched the old remote’s maddening touch-sensitive volume control strip in favor of actual volume and power buttons, while also adding dedicated fast-forward and rewind keys. There’s also a programmable button up top that can launch apps, open the settings menu, mute the volume, toggle AI upscaling, and more. Some folks might take issue with the big Netflix button at the bottom, but you can unofficially remap that one as well. 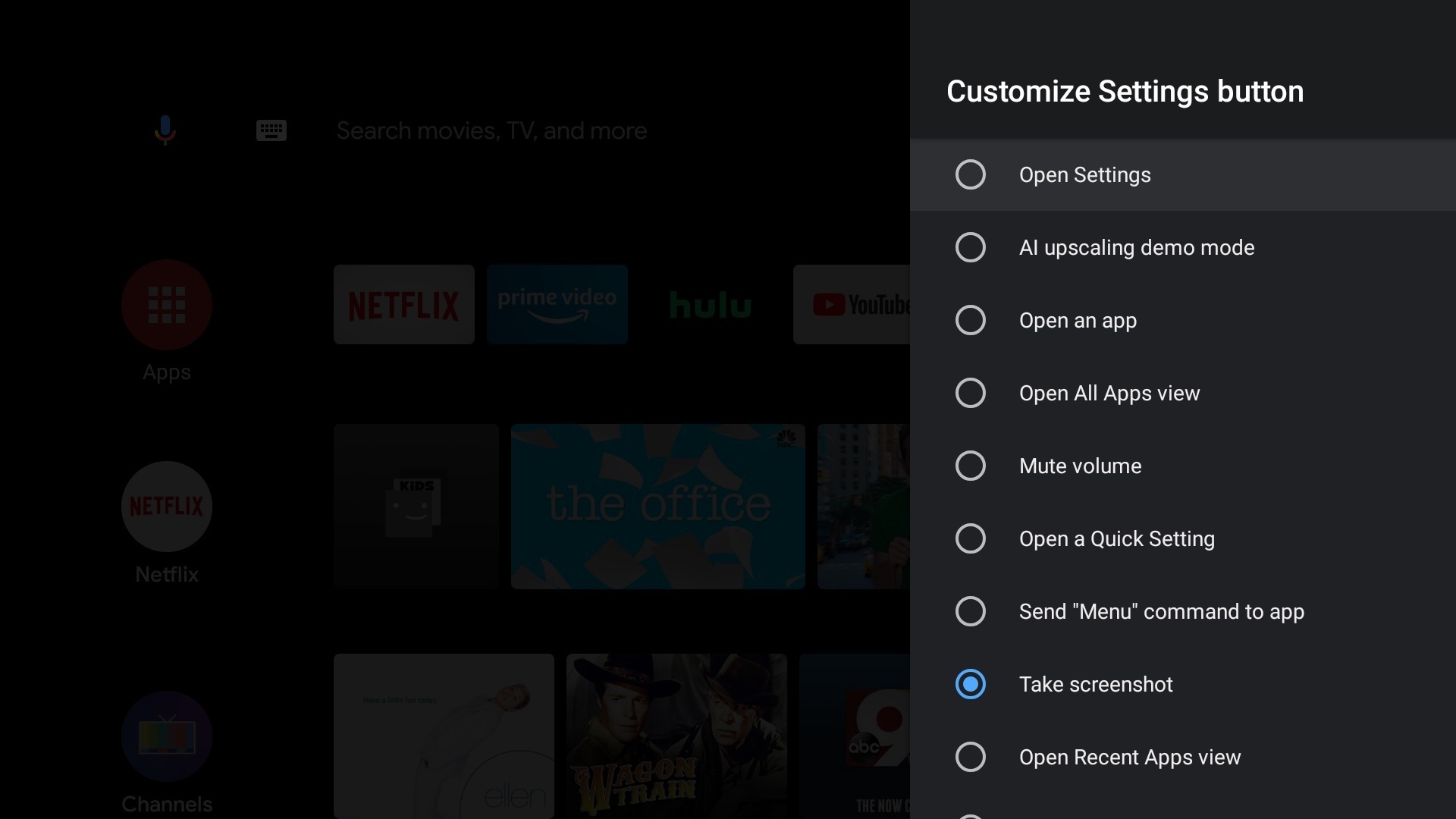 The Shield remote also includes backlit buttons, which have been around on cable remotes for ages, yet haven’t made the jump to streaming players until now. You’ll even find little raised ridges on the remote’s play and microphone buttons, so you can find your way around without taking your eyes off the screen. The layout of this remote isn’t perfect—I’m still not used to the vertical arrangement of fast forward, pause, and rewind keys—but it’s still one of the best streaming remotes I’ve used yet.

Setting it all up

On paper, all of this adds up to what should be the best high-end streaming box you can buy. It only falls short of that unqualified recommendation due to an overall lack of software polish.

Here’s an example of what I meant earlier about the need to tinker: After setting up the Shield TV, I noticed that it wasn’t streaming Dolby Vision HDR, even though my Vizio TV supports it. Digging into the Shield’s display settings, I found a Dolby Vision toggle that needed to be switched on. I also had to visit the settings menu to enable infrared control over my TV’s volume and power functions with the remote. While these aren’t major annoyances, every other streaming platform handles these setup steps automatically.

More vexing are the inconsistencies in the Shield’s underlying Android TV software.

To be fair, Android TV is a lot better than it was a few years ago, with far fewer gaps in its app catalog. I also really like the idea behind Android TV’s home screen, which can show you what’s on apps like Netflix, Hulu, and YouTube at a glance. And unlike the home screens on Roku and Fire TV, the Shield’s isn’t larded up with banner ads. 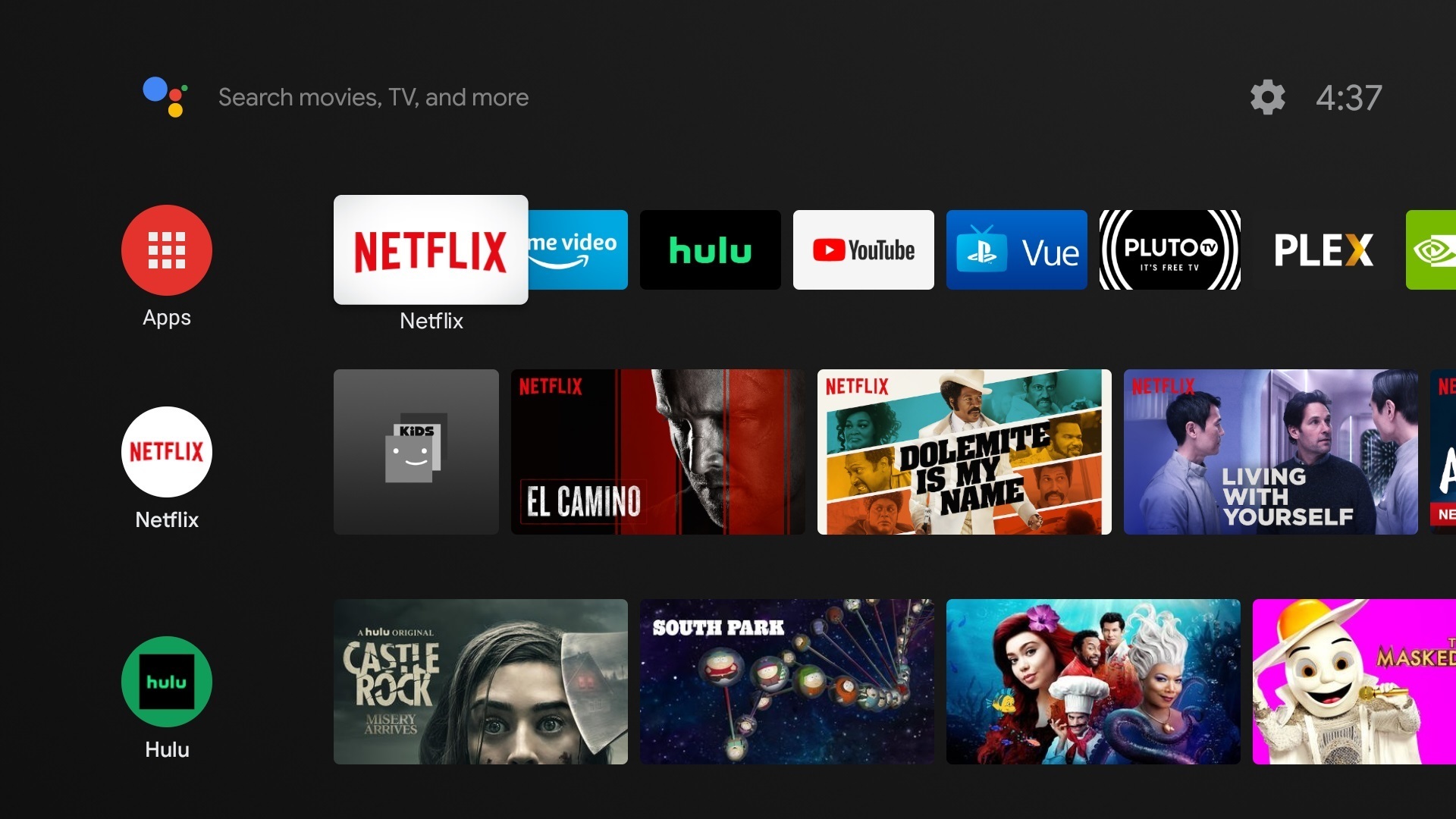 Still, it’s frustrating when apps don’t take full advantage of Android TV’s features. Pluto TV’s home screen row, for instance, always recommends Spanish-language channels that I’ve never watched, and Channels DVR sometimes forgets to refresh its list of live broadcasts. Even worse, Amazon Prime’s home screen row has disappeared from the Shield altogether after being available on the original, and no one can explain to me why. Android TV also has a “Play Next” row that’s supposed to list shows you’re currently watching, but hardly any popular apps utilize it. By comparison, Apple TV and Fire TV still do a better job at surfacing things to watch, while Roku is without peer in highlighting free content.

Google Assistant voice controls are also spotty. The Shield’s voice remote is great for in-depth genre searches, smart home control, and general information, and it can even launch content directly in certain apps such as Netflix and YouTube. Still, Amazon’s Alexa covers far more streaming services, including Amazon Prime and Hulu. And while the Shield is supposed to support hands-free voice commands from a Google Home speaker, I still can’t get this to work with Netflix. If you’re into the idea of a voice-controlled streaming box, the Fire TV Cube is a better option. 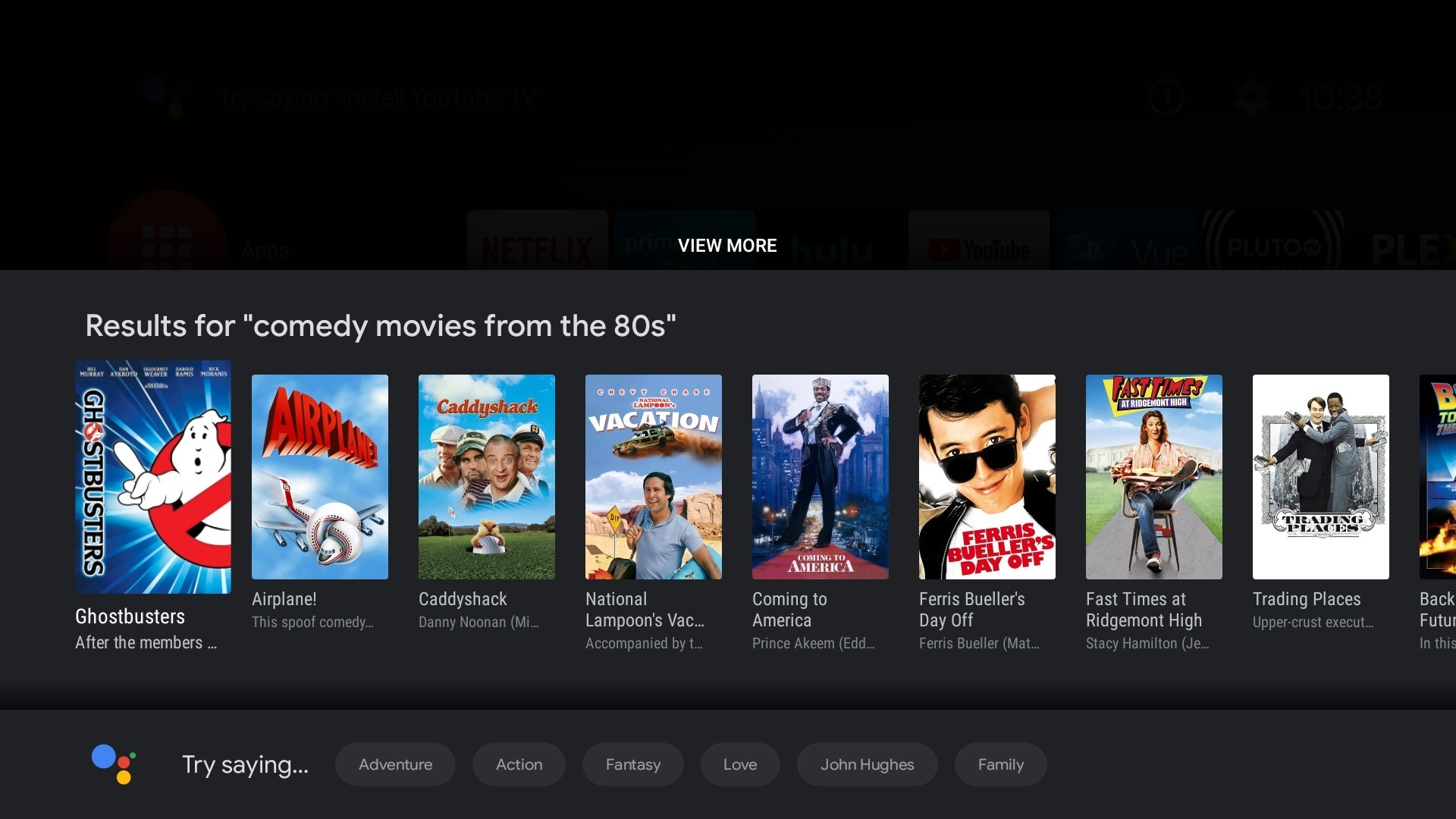 Having vented on all that, the Nvidia Shield TV still provides the best Android TV experience of any device today—by a wide margin. On other devices, I’ve come across frame-rate issues, janky performance, unreliable Chromecast support, and strange gaps in app compatibility. None of those problems manifest on the new Nvidia Shield TV.

Nvidia also goes above and beyond other Android TV devices on software features. It has a multitasking menu (invoked by double-tapping the home button), so you can quickly switch between apps, and you can use an Alexa-powered smart speaker to control basic playback. Nvidia’s remote control app for Android phones is better than Google’s version as well, with a quick-launch panel for apps and a trackpad you can use to control sideloaded apps. If you have a Bluetooth control, the Shield is even a decent gaming system with Nvidia’s GeForce Now streaming service, PC-to-Shield streaming, and a respectable selection of games to download. Not just for us nerds anymore

In my review of the previous Nvidia Shield TV from 2017, I argued that its strength was in not catering to the lowest common denominator. Even if it wasn’t the most user-friendly or cost-effective streaming box, it allowed you do accomplish things that no other products were even attempting.

Those ifs and buts are no longer quite as necessary. Android TV still has some lingering issues, which might make an Apple TV 4K, Fire TV Cube, or Roku Ultra better options for some users, but it’s a much better platform than it was a couple of years ago. And if you can tolerate the inconveniences that remain, you’ll get super-fast performance, impressive 4K upscaling, solid HDR, object-based soundtrack support, and a remote that raises the bar for other streaming players.

The Nvidia Shield TV is still the best Android TV box, and it’s not just for techies anymore.