Keenly priced and rammed with features, this is an excellent foundation for up-to-date Intel PCs

The ability to stick one of Intel’s latest 9th-generation processors into an 8th-gen Z370 motherboard hasn’t stopped an avalanche of new Z390 motherboards, even with this chipset’s lack of significant feature upgrades.

Nonetheless, there are models we’d be quite happy to build a Coffee Lake Refresh system around: the £296 Asus ROG Maximus XI Hero WiFi is a fitting base for high-end PCs, and now MSI’s MPG Z390 Gaming Edge AC successfully delivers a wide feature set for a far more accessible price.

It’s a full-size ATX board with Intel’s LGA1151 socket, so will hold any mainstream Coffee Lake and Coffee Lake Refresh CPU. It’s not entirely without visual flair – the rear I/O panel is concealed by an angular cover, and the underside of the right edge is decorated with controllable RGB lighting – but generally, the inoffensive black, white and grey colour scheme will help it blend in neutrally to any sufficiently sized case.

There are no built-in heatsink covers for either of the M.2 slots, but then the heat-spreading properties of these rarely improve performance in practice. The inclusion of two such ports, both capable of switching between PCI-E and SATA modes, is a strength in itself, as are the generous three PCI-E slots and three PCI-E x1 slots. The former can support two-way SLI and three-way CrossFire GPU setups, too, and an SLI bridge comes in the box.

Admittedly, the topmost two PCI-E x1 slots are likely to get covered up by a graphics card, unless it’s a slimline model. That might prove troublesome if you want to add a lot of expansion cards, but then these are often installed to make up for shortcomings in the motherboard – and here, there’s little reason to buy a Wi-Fi card or a sound card as well.

For one, there’s the star feature of integrated 802.11ac Wi-Fi, with Bluetooth 5.0 functionality coming from the same component. This only requires a couple of screw-on antennas at the rear I/O panel, not a larger wired antenna that needs placing elsewhere, and helpfully ensures your PC can stay connected without any extra dongles or adaptors, should you be unable to use a wired Ethernet connection (although the standard Gigabit Ethernet port is present and correct too). Bluetooth, often overlooked in the desktop space, is also handy for connecting things such as wireless headphones. 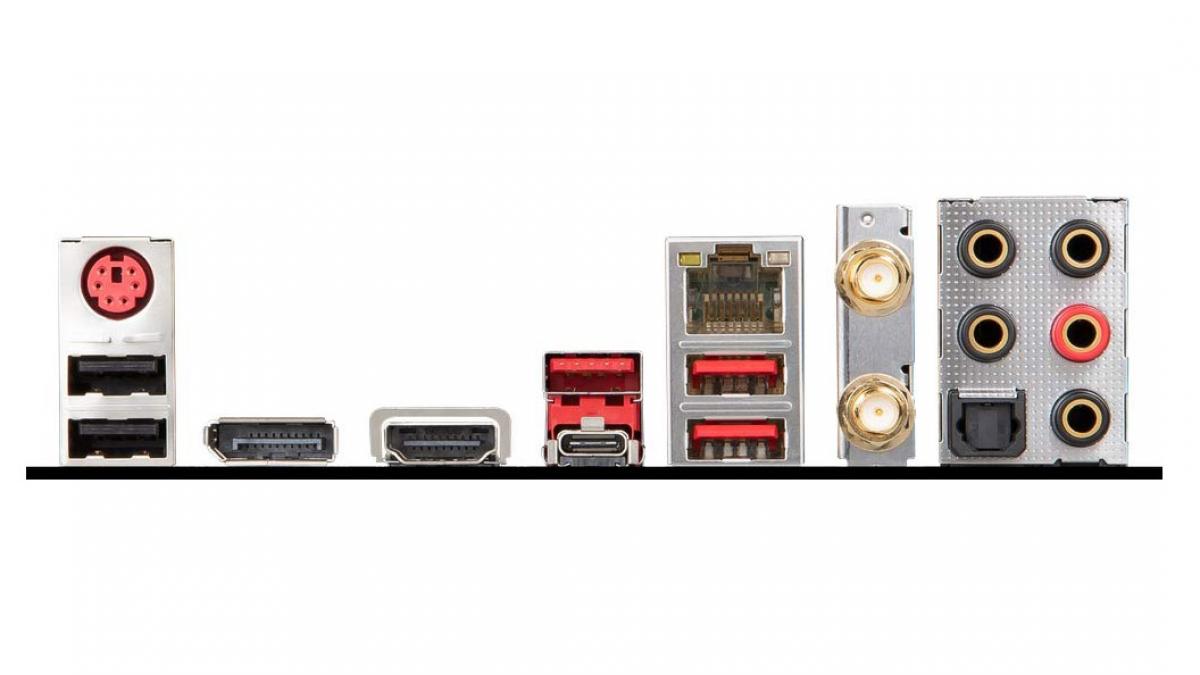 An excellent selection of audio ports also cuts down on the benefit of a dedicated sound card. In addition to the usual 3.5mm line in, line out and microphone jacks, the MPG Z390 Gaming Edge AC provides rear speaker and C/SUB jacks as well as an optical S/PDIF port, so hi-fi and surround-sound speakers can be set up without fuss. MSI has opted for the up-to-date Realtek ALC1220 audio codec too, not an older version as cheap boards often do.

We wouldn’t have declined a few more USB connectors: the I/O panel totals two USB2 ports, two USB3 ports, one USB3.1 port and a single USB Type-C. That will be enough for most home users, in fairness, but the slightly cheaper Gigabyte Z390 Gaming SLI has a full six USB3 ports and two USB3.1 ports.

Then again, it also lacks Type-C, S/PDIF and onboard Wi-Fi connectivity, so we’d say MSI’s motherboard has the advantage overall.

Performance testing showed once again that, all other things being equal, your choice of motherboard won’t affect performance much. Even with Intel’s mighty Core i9-9900K, running our 4K benchmarks resulted in the MPG Z390 Gaming Edge AC-based system scoring just one point lower than the aforementioned ROG Maximus XI Hero WiFi: 329 to 330. 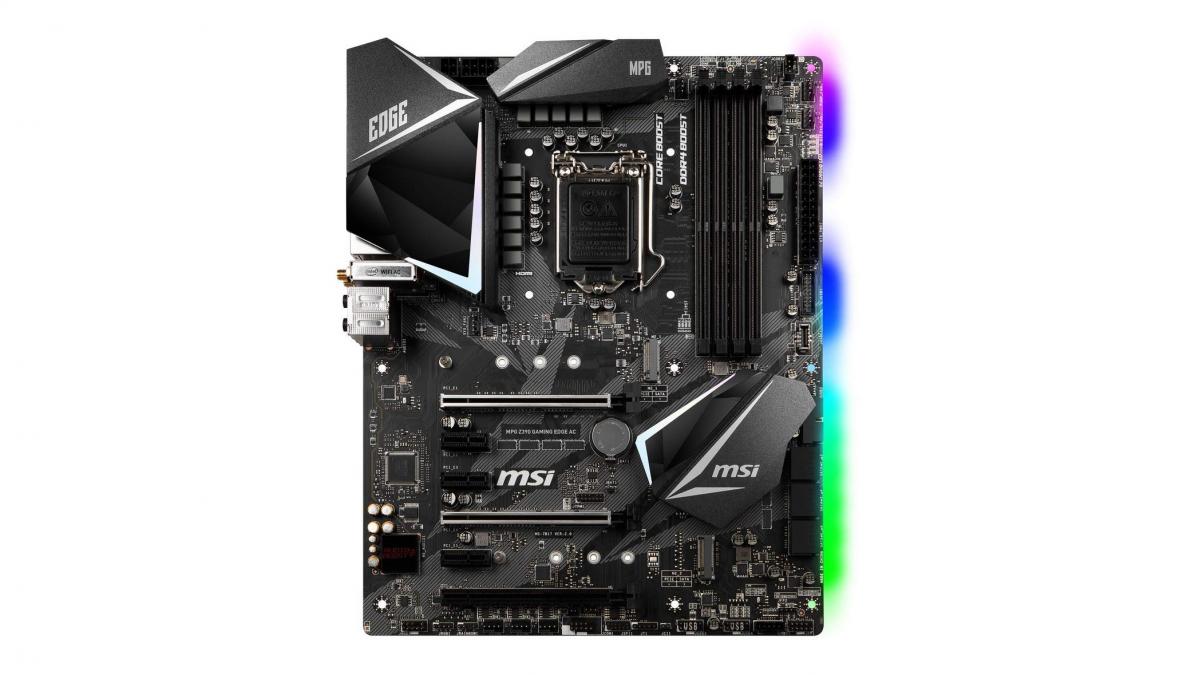 That said, Asus’s board seems better for ambitious overclocking. With the ROG Maximus XI Hero WiFi and an AIO watercooler, we got the Core i9-9900K to a stable 5.0GHz on all eight cores, but using the same settings with the MPG Z390 Gaming Edge AC meant crashes during the benchmarks.

The best we could manage was 4.9GHz with a 1.39v VCORE, so if you do want to push your 9th-gen Intel CPU to its extremes, it’s probably worth spending more on the motherboard.

Still, at least our trial-and-error testing was made easier by MSI’s industry-leading UEFI design. There haven’t been any big changes from the Z370 to Z390 generations, which is fine by us – the grid-based main menu has long felt like the most user-friendly among all the big motherboard manufacturers, though there are plenty of tuning options for experienced overclockers to dive into.

Mouse controls also feel a lot more reliable and intuitive than in, say, Asus’s BIOS, where it often ends up less frustrating to use the arrow keys for navigation instead.

Best of all, the MSI MPG Z390 Gaming Edge AC is one of the lower-priced ATX Z390 motherboards, even if that does arguably say more about Z390 pricing in general than it does about this particular model.

There are only a few more affordable ones, and they are invariably less well equipped, whether it’s I/O panel connectivity, a lack of Wi-Fi or the use of older audio codecs. As such, the MPG Z390 Gaming Edge AC is easy to recommend.

Don't miss a deal at Surfdome
Best offers at Intuit Small Business
Discounts, Sales and Deals at H&R Block
Save your money with The Home Depot
Online-Shopping with Sephora
Best products at Ancestry
Latest Posts