Microsoft’s first crack at over-ear headphones is ultimately as impressive and stylish as all of Microsoft’s hardware. We were very impressed with the active noise cancellation and sound quality of these headphones, although the design may polarize consumers.

The Microsoft Surface Headphones during the company’s October press event in 2018. What was more surprising, however, was Microsoft’s ambitions: the new Surface cans were designed to take on market leaders like Sony and Bose in the noise cancelling headphone world.

Nearly two years later, and they’re still a great pair of wireless headphones, even with rumors of the Surface Headphones 2 circling.

These headphones feature pretty immense noise cancelling technology as well as beamforming microphones for better voice pickup – all within a slick-looking and comfortable shell. However, while these headphones are compatible with iOS and Android as well as Windows 10, Cortana is the focus, which could be limiting compared to other options.

Should these be your next pair of wireless noise-cancelling headphones? We tried out the new cans and we were pleasantly surprised by just how good they are. They may not be quite the Sony WH-1000XM3 killers Microsoft had hoped they will be, but for Microsoft’s first aural outing, we were blown away.

Why so expensive? Well, Microsoft has packed an awful lot of features into the Surface headphones, including nifty touch panels on the left and right housing and integrated dials on each cup. But does this justify the price? We think so – as we will explain in further detail below. 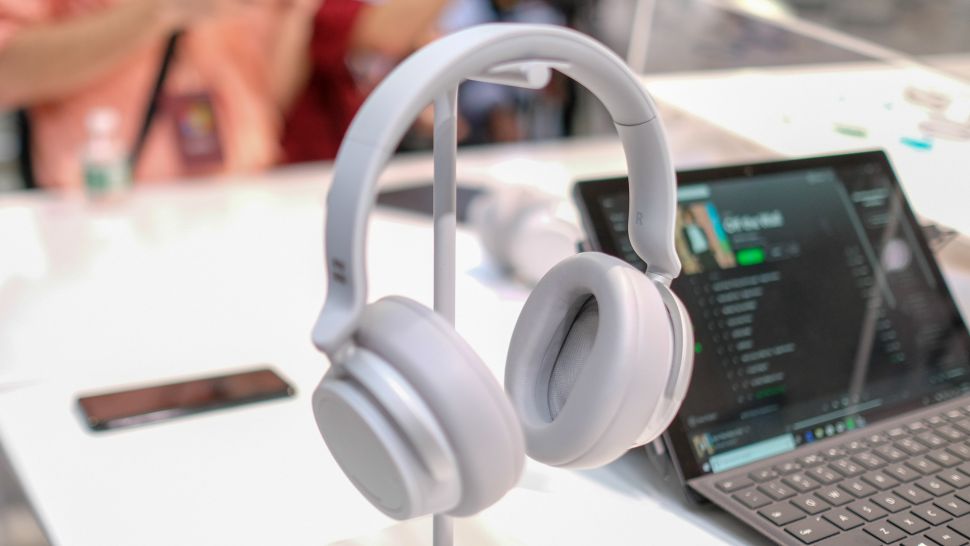 The Surface headphones are very, very gray. And, depending on your personal taste, that could be extremely attractive or mind-numbingly dull – as for us, we dig the minimalist aesthetic, but it would be nice to see more differentiation between the darker shade on the inside of the cups and the headband.

That being said, the Surface headphones do look pretty cool in a ‘normcore’ kind of way. Dare we say, Microsoft has developed a bit of an Edge? (Sorry.)

It leaves us craving more – for want of a better word – bling. There’s a small shiny Microsoft logo on each side of the headband above the cups, and the headband hinge is made from aluminum, but it feels like these silver accents should be incorporated onto the outside of the housing. After all, if you’re paying $350 for a pair of headphones, you probably want them to look a bit special.

However, they do come in a rather special carrying case, which feels sturdy enough that you could chuck into your bag when you’re on the move, without worrying about damaging the headphones.

All that gray also has the effect of making the headphones look slightly clunky, although they aren’t unusually large compared to similar models. Either way, the color scheme (or lack thereof) is sure to divide consumers; you love it, or you hate it. 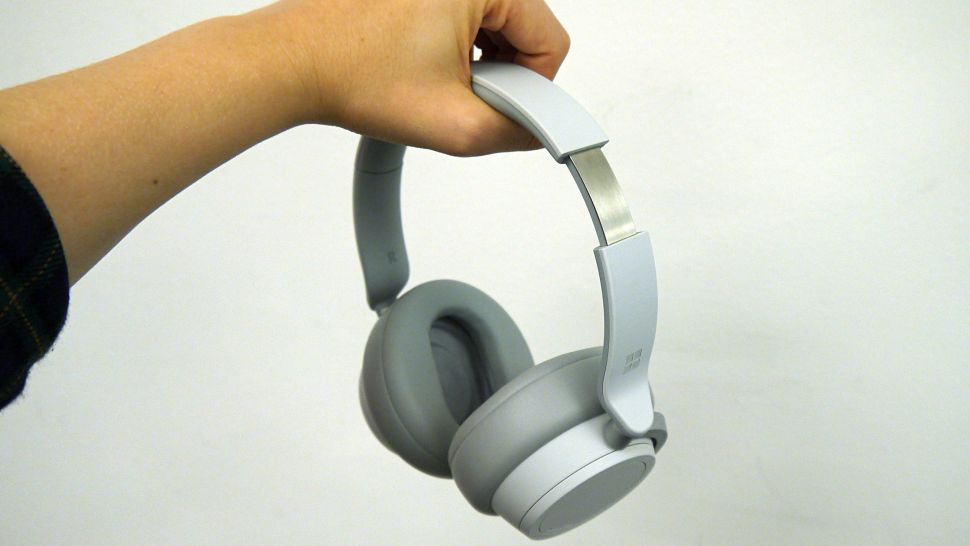 That said, the Surface headphones were designed with comfort in mind, with Microsoft taking inspiration from gamers who spend long periods of time wearing headsets. To make them feel as soft as possible, the cups are made from memory foam, which also cushions the top of the headband.

The cups themselves are very comfortable thanks to the memory foam, but we did experience a bit of pressure around the temples while using them. If you like a snug fit then you’ll likely get on well with the Surface headphones, but if you’re sensitive to pressure from headphones this could be an issue for you.

A word of warning about the headband: the slide bar that you use to adjust the size of the headband is liable to open as you move your head around – and as we discovered, this makes it easy for longer hair to get trapped and pulled as you take the headphones off. 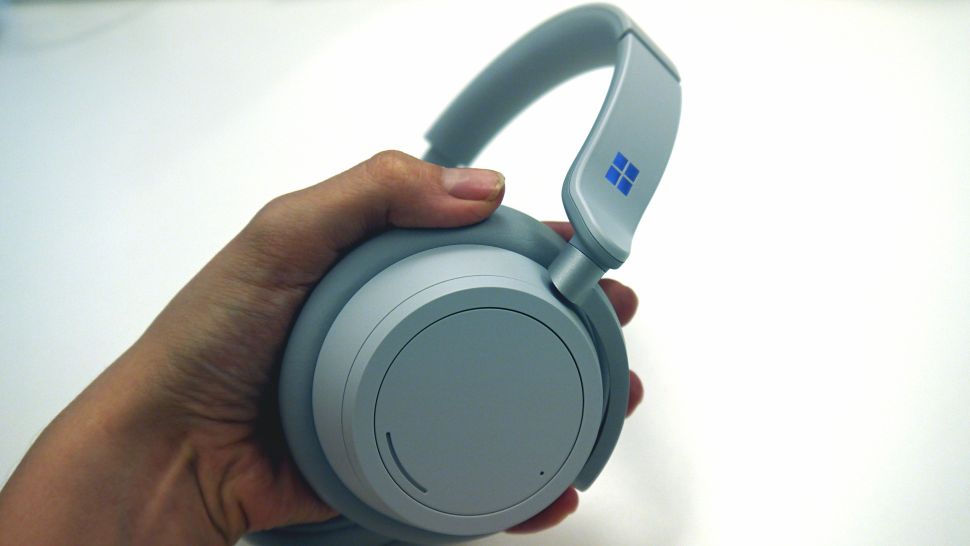 In short, the Surface headphones sound fantastic, and the bass frequencies are particularly impressive, with even the subbiest bass coming through beautifully on tracks like James Blake’s ‘Limit To Your Love’, thanks to its 40mm free-edge speaker drivers.

These headphones really shine when it comes to vocals however; we tried them out on ‘This Is The Last Time’ by The National, and we were really impressed with the warm and generous mid-tones that made every lyric sound resonant and emotive.

The soundstage that these headphone produce is generally extremely warm, with an almost analogue quality to it – whether this is positive thing largely depends on personal taste, and some users may find themselves craving a little more attack in the lower mids and sharpness in the treble frequencies.

Still, it’s all down to personal taste, and there’s no denying that these headphones offer a realistic and immersive replication of your music that you would normally expect from heritage audio brands – that Microsoft have achieved this is something of a surprise. 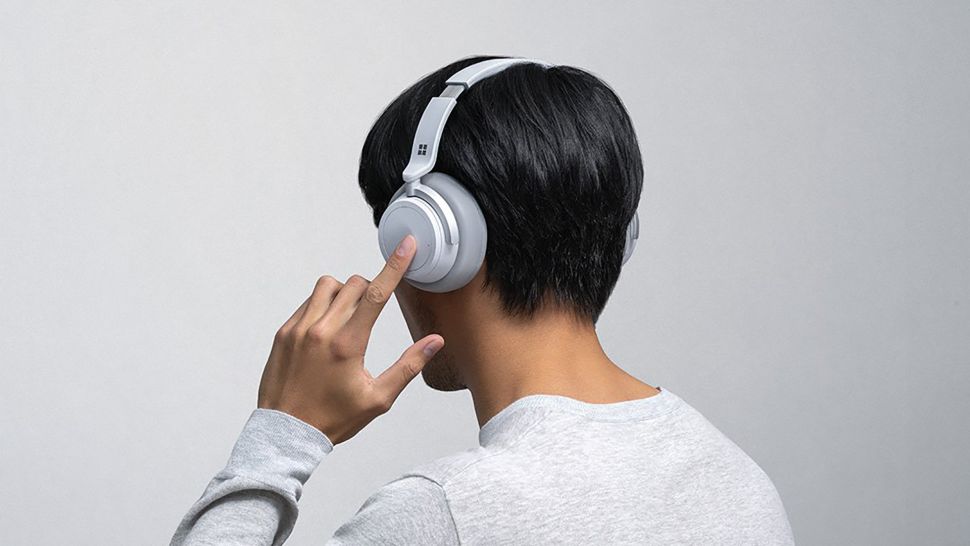 The active noise cancelling works pretty well, although it won’t block out all ambient noise in your environment if you don’t have music playing, unlike the Sony WH-1000XM2s. That being said, if you have the noise cancelling turned on while listening to music, you can pretty much get lost in the experience without being disturbed by your noisy shared office of the rumbling of the train on your commute.

What’s really impressive about the Surface headphones is the functionality of the inbuilt dials on each cup – simply turn the left dial backwards and forwards to control the noise cancellation feature, which is fantastic if your walking on a busy road and want to hear your environment without turning off your music. The same gesture on the left dial controls the volume of your music. 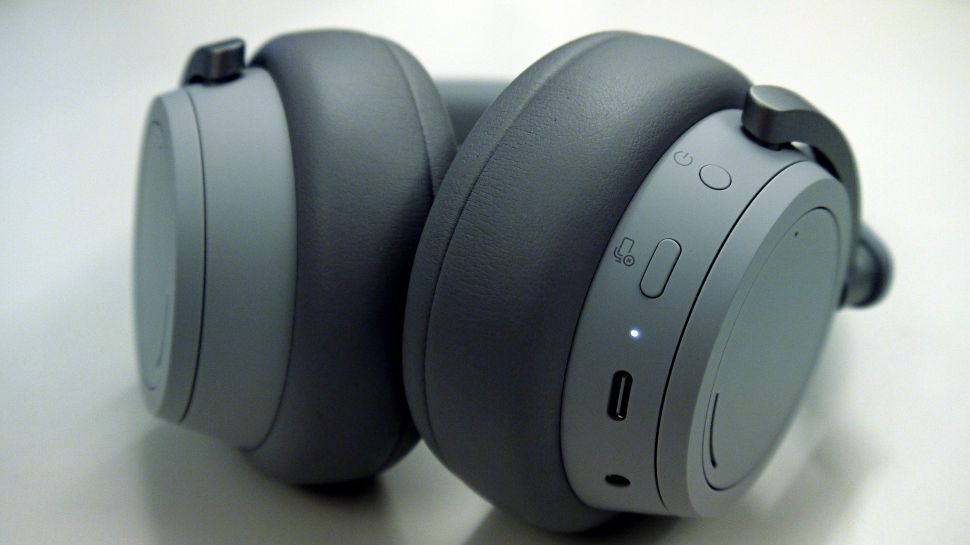 On the right cup you’ll also find a power button, a button to mute the inbuilt microphone, a microUSB outlet for charging, and a 3.5mm jack outlet if you prefer to listen to your music with a wired connection.

Battery life is around 15 hours if you have Bluetooth, active noise cancelling, and hands-free Cortana enabled (the latter is only available if you have Cortana downloaded on to your device), which is pretty good. Microsoft says that it takes around 2 hours for a full charge, which we found to be accurate.

Cortana is a bit of a sticking point as it happens – although Microsoft has advertised these headphones as having Cortana built in, they use four beam-forming microphones to listen out for Cortana commands, which the app on your device will respond to. In our books, this doesn’t exactly count as having an inbuilt voice assistant.

At any rate, you’re bound to be pleased by the performance put forth by these headphones, which should help justify the price a bit for those diehard Microsoft fans out there. 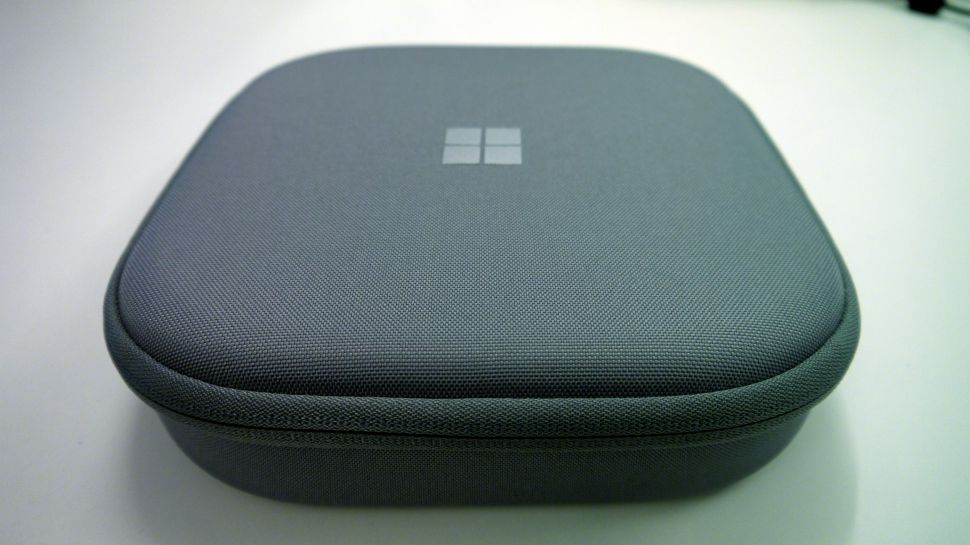 Overall, Microsoft’s Surface headphones are surprisingly good, with a stunningly warm sound, and generous bass frequencies, which means your music will sound great whether you’re listening to subby hip-hop or acoustic singer-songwriters.

One criticism of this warm sound is that it can take some of the attack away from lower-mid frequencies, which some users may find a bit underwhelming. However, if sharp trebles and mids tend to give you listening fatigue, these could be the perfect headphones for you.

The calling card of these headphones is the active noise cancellation, which we felt worked really well, and we loved how easy it was to control this using the inbuilt dials on each housing.

Although we were initially unconvinced by the high price (particularly when you can buy quality cans from heritage audio brands for less), the features work so seamlessly that it feels justified.

Finally, while the simplistic design won’t be to everyone’s taste, you may find that you want a pair with a bit more panache if you’re paying $350, in which case, you may want to check out the AKG N60NC Wireless headphones, which are half the price and boast a more classic design.

Previous ArticleIntel Alder Lake 12th-gen CPUs could usher in a new socket in 2021, leaving Z490 motherboards out in the cold
Next ArticleGoogle Stadia coming to Android TV soon, if latest app code is any indication
Comments (0)

Don't miss a deal at Groupon
Best offers at Sephora
Discounts, Sales and Deals at Marks and Spencer
Save your money with Go Daddy
Online-Shopping with Surfdome
Best products at Argos
Latest Posts