The Tufton is the latest Marshall Bluetooth speaker to cross TechHive’s portal. It’s a large, loud, bass-pumping, but bare-bones unit designed for outdoor and party use. It sounds decent and its build quality is top-notch, but its $400 MSRP is a fair amount of coin for an oddball stereo implementation, no buttons to control playback or handling phone calls, and no ability to charge other devices.

The styling of the Marshall Tufton is a nod to…. Well, to be honest, I’m not sure. It has the Marshall logo, tweed grill, and Tolex covering, but it’s too skinny to be a combo amp, and it doesn’t mimic the iconic Marshall stack, either. That said, it absolutely does shout Marshall if that’s what you’re after. 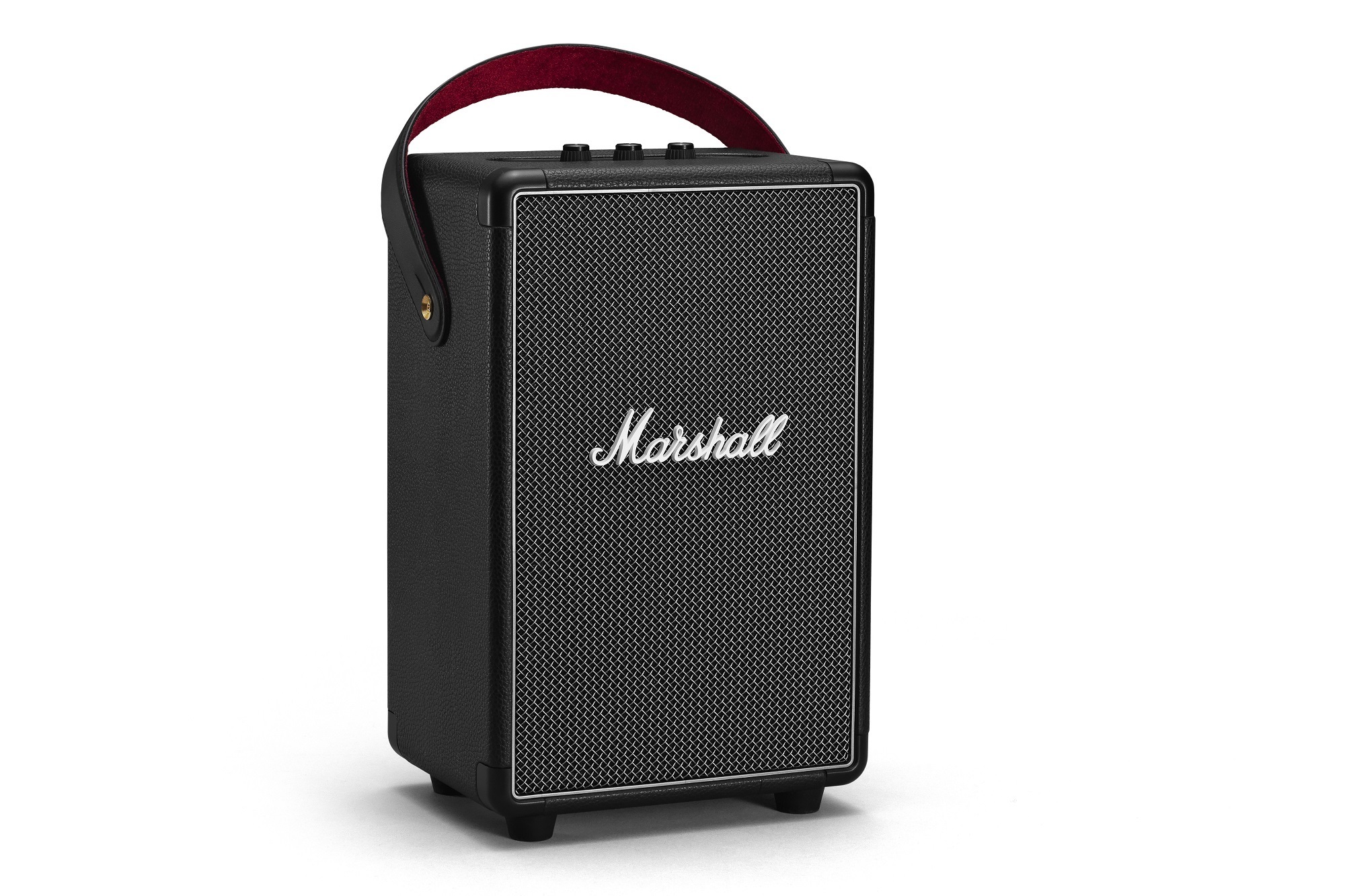 I mentioned that the Tufton is on the large side, measuring approximately 14 x 9 x 6.5 inches (HxWxD) and weighing slightly less than 11 pounds. That heft reflects very sturdy MDF construction and heavy-duty components. The back, held in place by high-quality screws, comes off, and for several reasons, I took a peek inside. A bit more on that later. The wide and durable carrying strap makes it actually feel a little lighter than the advertised weight, but it’s certainly not for hiking.

Audio is facilitated by a four-way Class D amplifier: A 40-watt section to drive a single 5.25-inch woofer, two 15-watt sections to drive a pair of 2.0-inch mid-range drivers, a 10-watt section to power the Tufton’s single 0.63-inch dome tweeter. Don’t let the dual mid-range speakers fool you, the Tufton is not stereo as you might expect it. One of the mid-range drivers faces backward, and while the mids in a stereo signal are split between them, the high frequencies and low-end are not. More on how it sounds in a bit. Speaking of low-end, the unit is ported for bass response and it’s quite effective.

The Tufton has just four controls: Volume/On/Off, treble, and bass knobs, and the Bluetooth pairing button, but they’re silky smooth and solid feeling—Marshall didn’t cheap out in terms of quality on any level. Even with the Bluetooth, which is version 5.0 for better range. 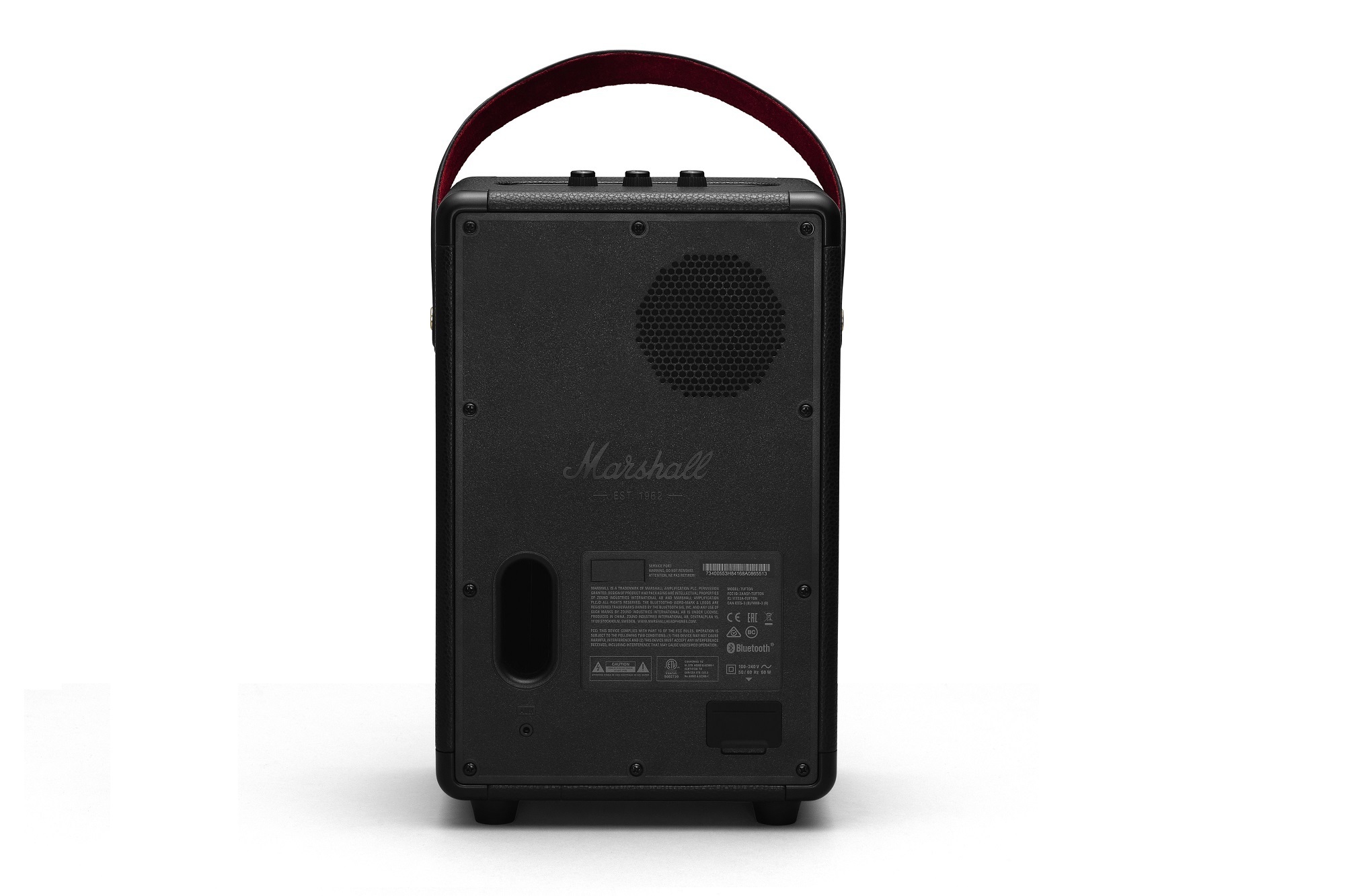 The absence of play/pause and skip forward/back controls means you can’t use the Tufton to control playback from a Bluetooth source. And since there’s no mic onboard, you can’t use it as a speakerphone, either. Admittedly, those are minor concerns given the speaker’s intended role; but given the price, it seems a bit penny-pinching.

The Tufton is rated IPX2, meaning a few drops of liquid shouldn’t do it much harm, but don’t take it in the pool or leave it out in the rain (you can read more about IP codes here). A captive rubber plug covers the two-prong connector for the power cord and its 3.5mm aux input, but again, it’s a guard a against showers, not immersion.

The actual rating of the battery wasn’t provided, but it’s large enough to run the unit for a good 20 hours. It will charge fully in 2.5 hours, and it can be quick-charged for 20 minutes and still last 4 hours. That’s about what I experienced, or I should say the manufacturer’s battery-life claim is close enough for rock ‘n’ roll. Alas, there is no USB port for charging other devices.

When I saw the Tufton’s price tag, I was expecting a great sonic experience. It does get loud with minimal distortion, and the bass and high frequencies are nicely tuned at default settings (i.e., zero). But there’s a deficit in the mid-range that deprives the overall sound of much in the way of bite. The Tufton is hardly unpleasant to listen to, but I found myself crinkling my countenance and craning my neck forward slightly, as if that might help me distinguish the details I felt were missing. 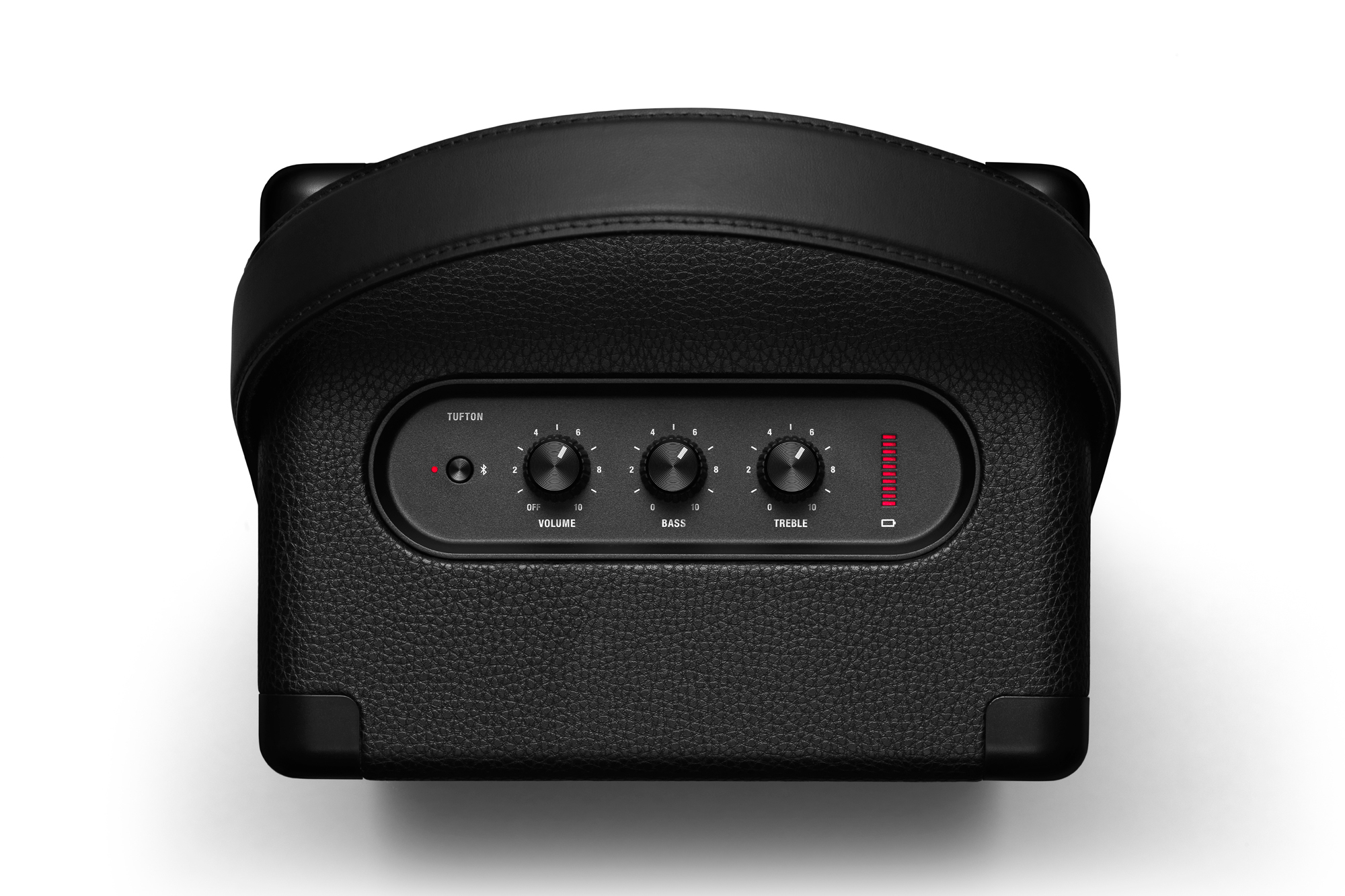 This could be because half the mid-range signal is routed to the back of the speaker, though it could also be a characteristic of the 2.0-inch full-range drivers that Marshall employs. Marshall is calling this Blumlein stereo, after a two-microphone recording technique used for capturing spatial audio information.

As to that Blumlein stereo: Listening from directly in front, it’s not particularly pronounced even if you back the Tufton up to an acoustically reflective surface so the rear speakers emanations bounce forward. That’s actually a gross understatement.

You can hear the stereo effect much better if you face one side of the Tufton, but it’s minimal and odd because all the high frequencies are directed forward towards one ear. Though I could recognize music as stereo, I had to create a special file with hard pans to really verify it. Bass is generally perceptually directionless, so that’s not as big a deal.

To be honest, I’m not sure I see the point unless Marshall was simply having a hard time fitting both speakers on the front. Both mid-range speakers are in their own isolating sub enclosures. Bottom line, the stereo image is weak at best and I have to question Marshall referring to this as a stereo speaker. It’s certainly not stereo in the way most listeners would expect. 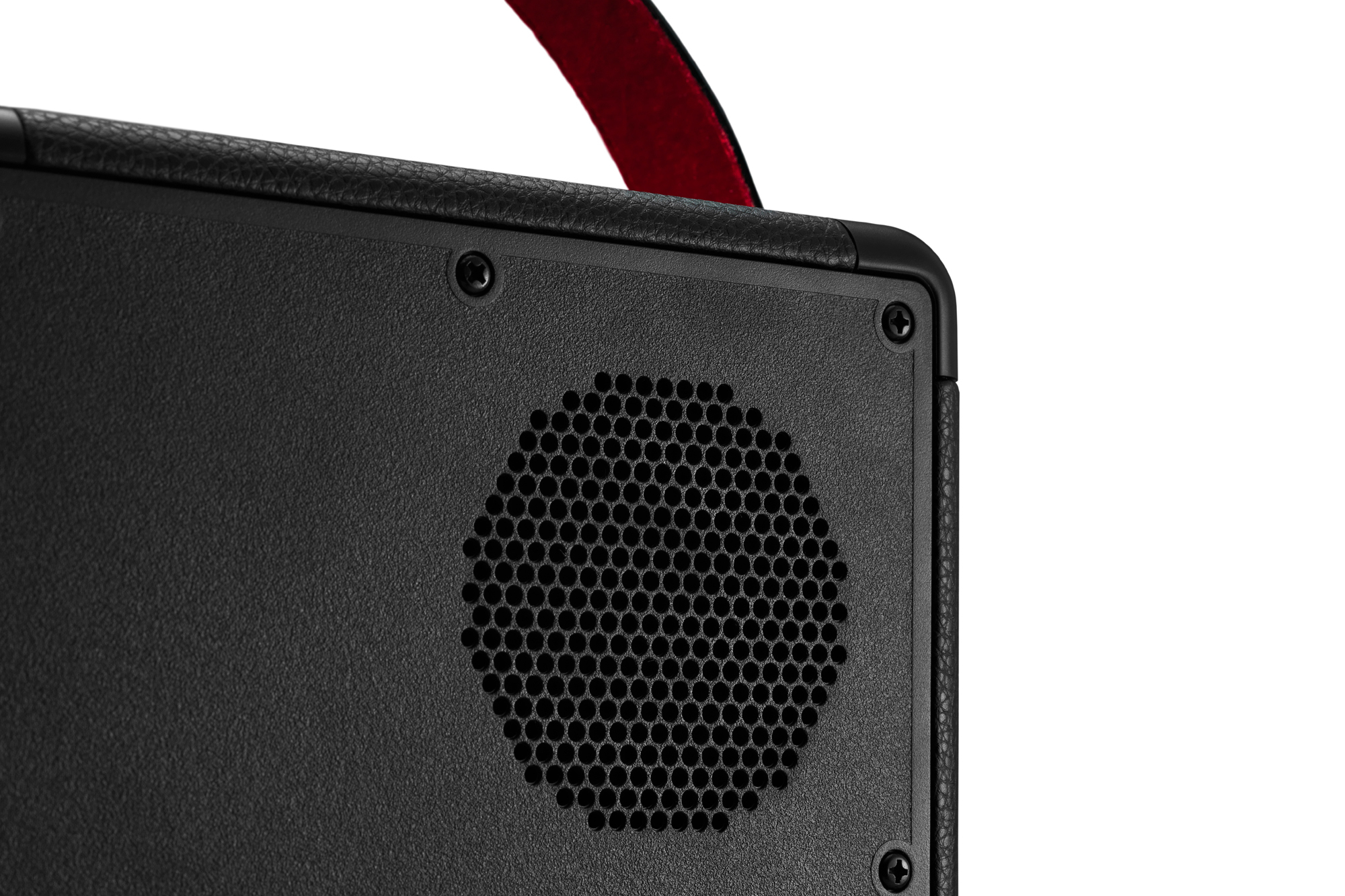 By the way, when I said nicely tuned default bass, that’s according to my preferences. You can pull extremely large amounts of thump out of the Tufton by cranking the bass knob, if that’s your thing.

Stereo or not, the overall sound of the Tufton is absolutely fine for the outdoors or dance floor, where stereo means little and mid-range gets squashed by ambient noise most of the time anyway. Try to bounce the rear signal off something if you can. For fine listening from directly in front, the lack of stereo separation and personality-revealing mid-range might rankle.

My problem with the Marshall Tufton is not its sort-of-stereo sound, lack of phone call and playback control, or its inability to charge other devices—it’s the $400 price tag. I enjoyed my hands-on, and I certainly appreciate the built quality, but $250 would be a fairer price given its foibles. Then again, as some of my cousins are fond of pointing out, I’m “value-oriented.”

If loud, thumpy, and the Marshall logo and design aesthetic are what you’re looking for—and money isn’t a barrier—the Tufton delivers. But bounce those rear waves for best results.

The Tufton sounds pretty decent given that the stereo mid-range speakers are oriented opposite each other. It’s loud, thumpy, and good-looking, but it lacks a number of features the competition offers in this price range.

Don't miss a deal at Marks and Spencer
Best offers at H&R Block
Discounts, Sales and Deals at Sephora
Save your money with Go Daddy
Online-Shopping with Mobiles
Best products at Sky
Latest Posts