LG XBOOM Go PL7 review: A Bluetooth speaker to light up any occasion

The LG XBOOM Go PL7 is one of five new additions to South Koren electronics manufacturer’s extensive portfolio of Bluetooth speakers. Delivering enjoyable, impactful sound and a customisable light show, it’s perfect for parties. But with those off the agenda for the time being, is it worth buying for daily use?

LG XBOOM Go PL7 review: How much does it cost?

The XBOOM Go PL7 typically retails at £170 but is available for a cut-price £139 until 30 September. That’s around par for a speaker of the PL7’s size and specification, although those hoping for additional accessories will be disappointed as it comes with nothing more than a USB-C charging cable.

The PL7 connects wirelessly via Bluetooth 5 and provides support for the AAC and SBC audio codecs. Sonically, it’s capable of outputting 30W through two 2.3in drivers aided by passive bass radiators at either end of the speaker.

With 24 hours of quoted battery life, the PL7 leaves the majority of its competitors in the dust in terms of stamina and it charges via a USB-C port hidden under a rubber flap on the back of the speaker. Alongside that port are an AUX-in and a handy USB-A port for charging your devices.

Measuring 245 x 98 x 98mm and weighing 1.46kg, the cylindrical PL7 has plenty of heft to it but isn’t unwieldy to move around. Should you be looking for a cheaper and more compact alternative, it’s worth checking out the PL7’s stablemates, the XBOOM Go PL5 and XBOOM Go PL2. The former delivers 20W of audio, weighs 990g and costs £130, while the latter is even lighter at 550g, will set you back just £60 but its output is limited to 5W.

The PL7 is well protected by a rubberised casing, but this does pick up fingerprints pretty quickly. It also comes with an IPX5 rating, certifying it resistant to low-pressure water jets. Although capable of surviving a drink being spilt on it, its water resistance doesn’t extend as far as submersion in water, so you’ll want to be careful if using it around the bath or swimming pool. 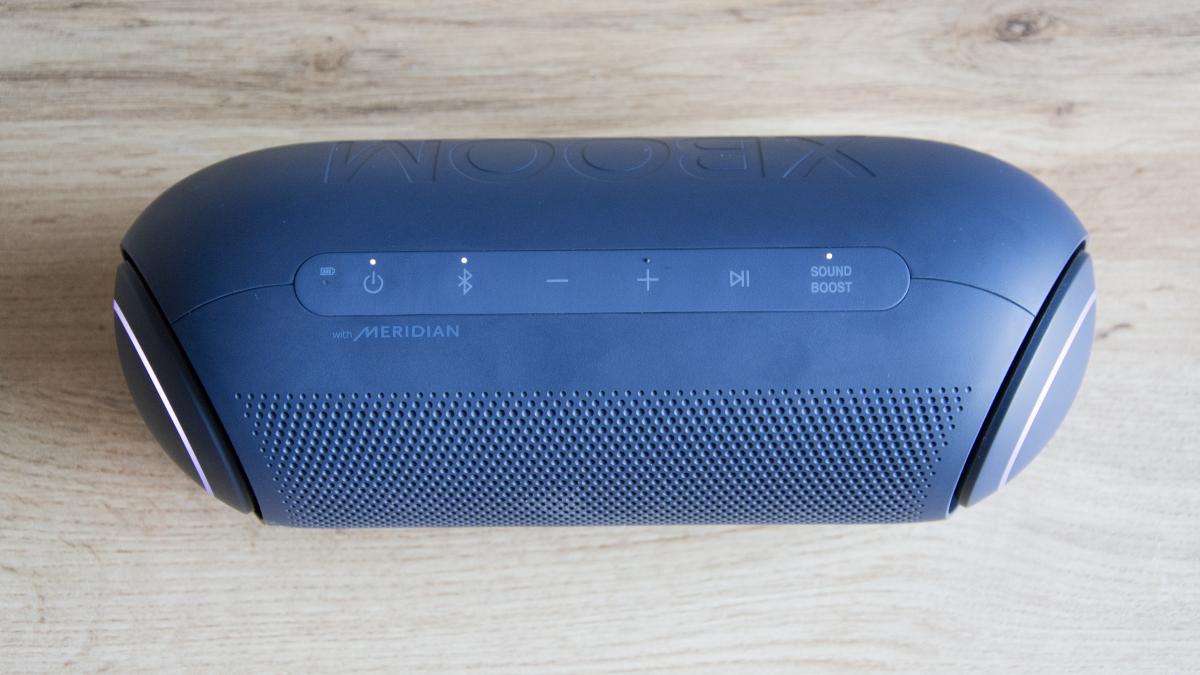 One of the XBOOM Go PL7’s big draws is its lighting effects, which I became rather enamoured with. When active, rings on the outside of the passive radiators illuminate, adding a burst of colour to your audio.

Using the LG XBOOM companion app, you can choose between three effect presets – Party, Water or Forest – which feature different colours and illumination patterns, or you can opt to concoct your own profile, bizarrely named Jellybean. With Jellybean selected, you can select your preferred hue (from green, blue, yellow, pink, purple or multicolour), the speed at which the lights pulsate or toggle whether or not they shift with the beat of the music. An earlier firmware version allowed you to select a specific combination of colours to cycle through; it’s a shame that it was removed in the latest update as the added personalisation was welcome.

I typically don’t buy into LED lighting but I have to say, the LG XBOOM Go PL7 implements it superbly well. It’s done in a tasteful manner and you can tweak it to create the right ambience regardless of whether you’re trying to create your own mini rave or simply chilling on the sofa. And for those times where you just can’t deal with flashing lights, they can be turned off entirely in the app.

Should you want a more substantial sonic experience, you can pair the PL7 with other PL7s. Hook up two with a 2020 LG LED, NanoCell, or UHD TV and you can enjoy what LG calls “Bluetooth Surround” while watching your favourite movies. And for a true assault on your senses, you can connect up to 100 PL7s simultaneously for what I can only imagine would be a light show akin to a 70s disco dancefloor. Connecting multiple speakers couldn’t be easier, simply press the Dual or Multi buttons tucked away under the rubber flap on the rear of whichever devices you want to output your audio.

Controlling the more basic aspects of the PL7 is a breeze, too, with depressible power, Bluetooth, play/pause and volume buttons located on the top of the speaker. In darker environments, however, they’re not as visible as they could be and would benefit from being illuminated. 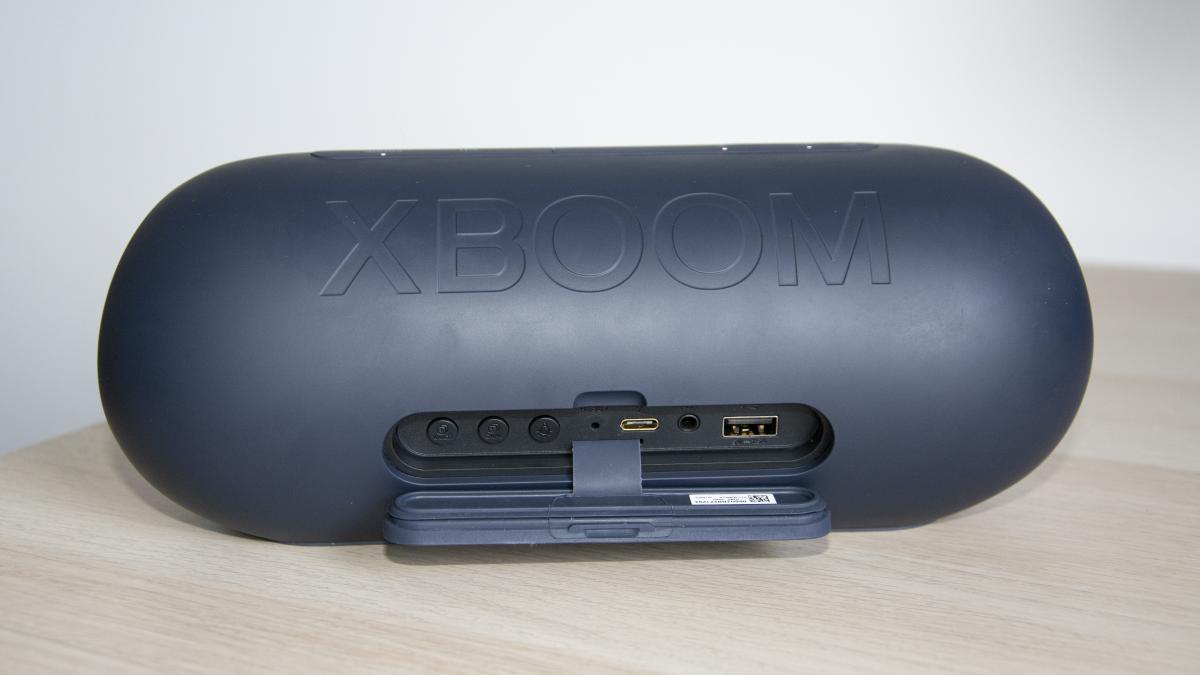 Elsewhere, the PL7 has voice assistant support for both Siri and Google Assistant, although this is limited. You have to press the power button for two seconds, and only then does the speaker trigger the assistant on your phone. That’s a bit clunky and because this process relies on your phone there’s also a delay between uttering your command and its execution. Most of the time it proved more efficient to use the manual controls on either the speaker or my output device, anyway.

When receiving or making calls, the PL7 very ably doubles up as a speakerphone. Microphone quality is solid, with my voice being heard loud and clear at the other end of the line without me having to raise it. A couple of people I spoke to reported some echoing but this turned out to be down to the acoustics of my office and in a less cavernous space the effect was far less noticeable.

LG XBOOM Go PL7 review: How does it sound?

The PL7 has two sound profiles, Standard and Sound Boost, both of which use Meridian’s digital signal processing technology. They’re both strongly mid-range focussed but Sound Boost offers a significant step up in sonic power, an extra kick to the bass reproduction and a wider soundstage.

While listening to London Grammar’s “Baby It’s You” in Standard mode, singer Hannah Reid’s voice was front and centre of the audio mix and communicated with great clarity. The ambling bassline rolled along smoothly while playing second fiddle to the more delicate aspects of the track. Engaging Sound Boost brings the mid-range and vocals to the fore even further and adds a bit of low-end muscle to the track at the expense of overall audio balance.

The same proved true while listening to genres that rely on communicating detail accurately rather than blowing you away with forceful sound. While casually listening to soul, country and classical music, I found Standard mode provided a better-rounded, more satisfying experience. 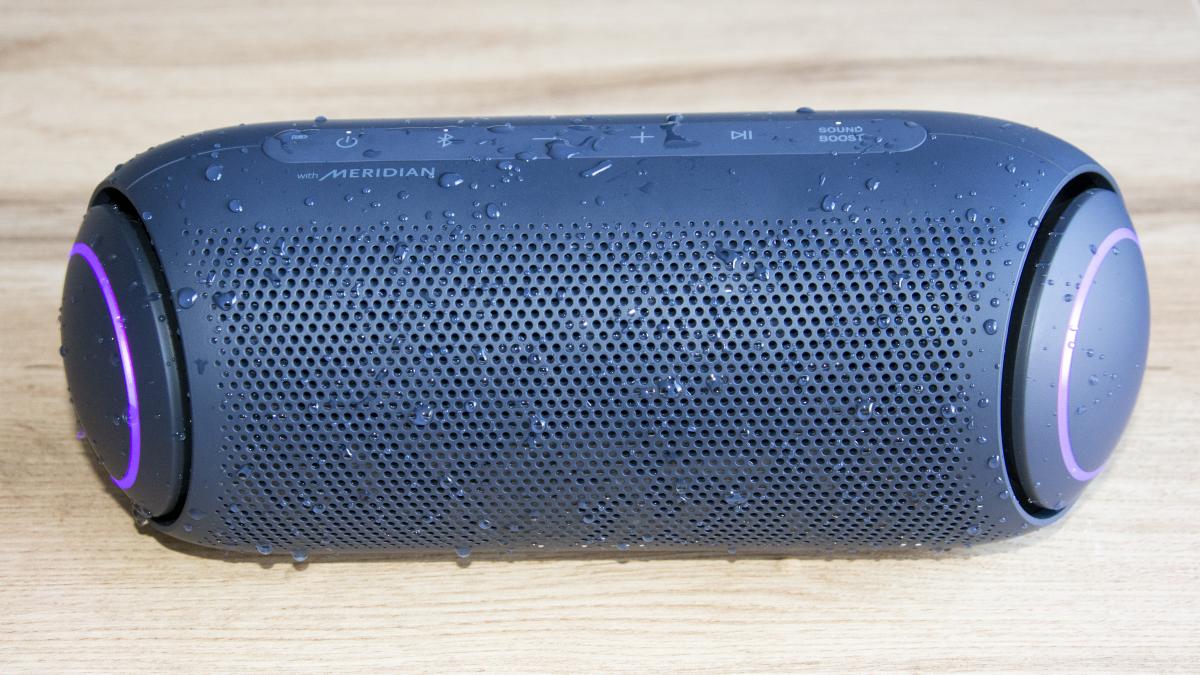 But for the kind of tracks likely to make it onto your post-Covid party playlist, Sound Boost comes into its own. The boosted audio really packs a punch, especially when you push the volume up, although I did experience some distortion during a couple of tracks while blasting out TIDAL’s Metal Classics playlist. Electronic genres didn’t suffer from that issue, however, and the enhanced output of the PL7 with Sound Boost on had me throwing shapes in my living room.

Which profile you’ll use more will come down to where your audio preferences lie. I enjoyed both in different situations and having the two options at your disposal means you’re covered no matter what type of music you’re listening to. That said, I would have liked to have seen an EQ adjustment option within the XBOOM app to personalise the sound to your taste.

LG XBOOM Go PL7 review: Should you buy it?

Don’t let its mesmerising lights fool you: the LG XBOOM Go PL7 is far more than a gimmicky party speaker. Yes, it’s at its best when you’re pumping out beats and dancing your heart out in a darkened room but it’s a decent casual listen, too. Throw in the ability to double up as both a power bank and speakerphone and you have a Bluetooth speaker as versatile as it is eye-catching.

It may not offer the level of audio detail or balance that the B&O A1 2nd Gen does, nor the water resistance of either the UE Megaboom 3 or JBL Charge 4, but the XBOOM Go PL7 is a great all-rounder capable of getting any socially-distanced party started.

Don't miss a deal at Nike DE
Best offers at The Home Depot
Discounts, Sales and Deals at TalkTalk Phone and Broadband
Save your money with House of Fraser
Online-Shopping with Marks and Spencer
Best products at Bodybuilding
Latest Posts