Laptop manufacturers are beginning to adopt Intel’s 10th generation processors en masse, and the latest to do so is Lenovo with its Yoga C940 series of laptops. Available with a 14in display, the company’s flagship 2-in-1 ultraportable goes head to head with the Dell XPS 13 2-in-1, which has also recently updated to Intel’s latest silicon.

Lenovo Yoga C940 review: What you need to know

Lenovo’s newest flagship laptop, like previous Yoga machines, is a multi-talented ultraportable. Open it up and it looks just like a regular Windows 10 laptop, albeit a rather attractive one. It has a 14in touch display available in 1080p or 4K and a full-sized keyboard and touchpad beneath it.

Pick up the laptop and push that screen backwards, however, and you’ll discover that the Yoga C940 is, in fact, a 2-in-1 and can be used in a number of different positions. You can fold the screen all the way around and use the C940 as a giant tablet – like a digital clipboard – and there’s even a stylus so you can take handwritten notes. You can also prop it up in “tent” mode for an easier way to show off your PowerPoint presentations or simply fold the keyboard underneath for a distraction-free way to watch Netflix.

This is no lightweight toy, however. The presence of Intel’s latest generation of CPUs and on-package graphics means its capable of running some seriously demanding applications and even the odd game. 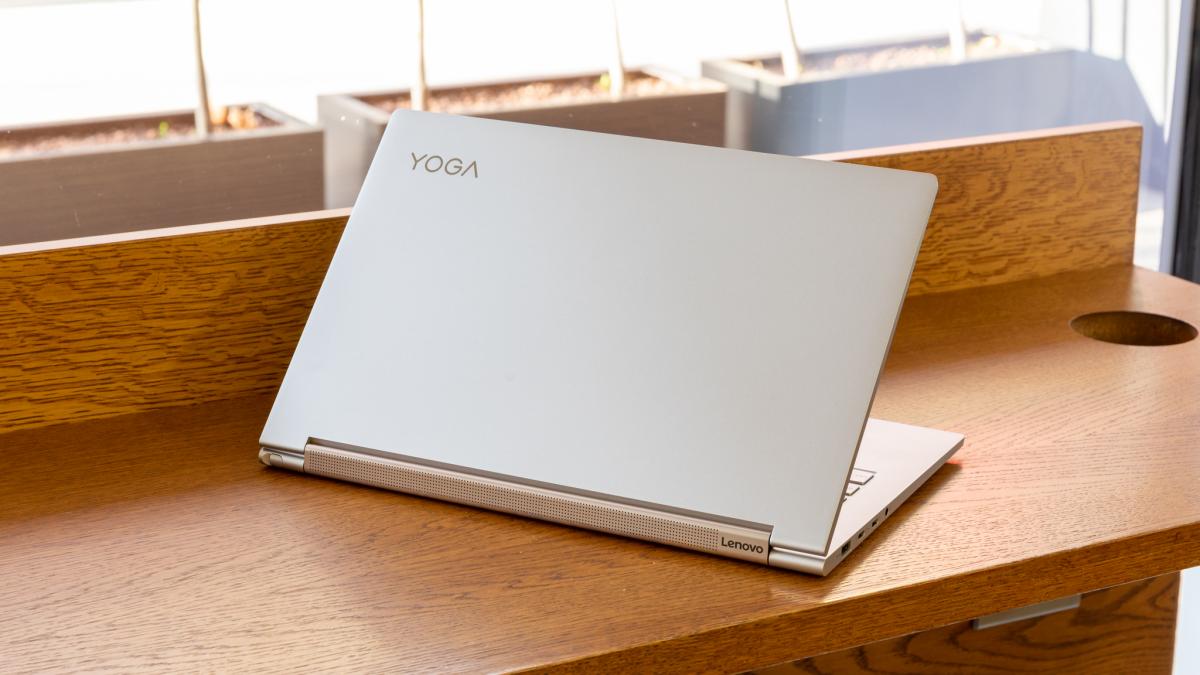 If you can do without the 360-degree hinge, your options are almost limitless, certainly when it comes to Windows 10 machines. Our pick of the bunch again comes from Dell: the XPS 13, which starts at a price of £1,399 and comes with a tenth-gen Core i5, 8GB of RAM and a 512GB SSD. The 13.5in Microsoft Surface Laptop 3 is another good shout, with prices starting at £949 for a tenth-gen Core i5, 8GB RAM and a 128GB SSD.

If you want a cheaper alternative, the 14in Acer Swift 5 is another good option, with prices starting at £900 for the model with a tenth-gen Core i5, 8GB of RAM and a 256GB SSD.

The essential idea behind the Yoga C940 is the same as the Dell XPS 13 2-in-1. It’s a lightweight laptop with a 360-degree hinge that lets you use the laptop in a number of different configurations.

Where the Lenovo differs from the Dell, however, is that it comes with an active stylus, which is stowed away neatly in a slot in the spine of the machine. The Dell is stylus compatible but doesn’t come with one in the box and doesn’t have a slot in the chassis for it. Another thing the Lenovo has that the Dell does not is an integrated cover for the 720p webcam, which you can slide across for privacy.

Alas, you can’t use the webcam to unlock the machine with your face as it isn’t Windows Hello compatible but there is a fingerprint reader that sits just below the bottom right-hand corner of the keyboard for speedy unlocking. 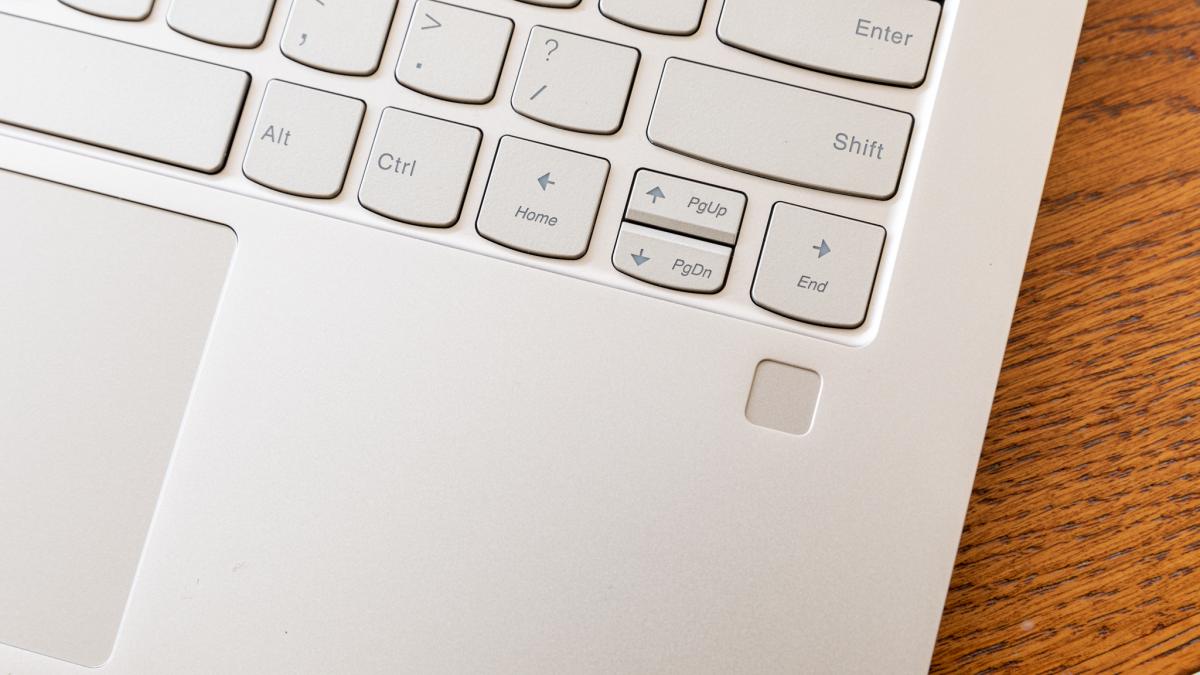 Otherwise, the Lenovo keeps pace with the Dell pretty well; both machines are slim, well made and attractive. The keyboard is pleasant enough to type on; I’d prefer more travel and more positive feedback but it feels solid and robust enough and there’s a good amount of space surrounding each key, ensuring typos are kept to a minimum. The touchpad is large and responsive without coming close to the size of the pad a MacBook Pro. It’s a diving-board type, which means you can’t click it along its top edge but the clicks otherwise aren’t too heavy or rattly.

Connectivity is limited, as you might expect of an ultraportable machine like this but you do get a little more than you do on the Dell with an old-school USB Type-A (3.1 Gen 2) port sat alongside a pair of Thunderbolt 3-enabled Type-C ports on the left edge of the machine. It’s also good to see a Wi-Fi 6 (aka 802.11ax) wireless. 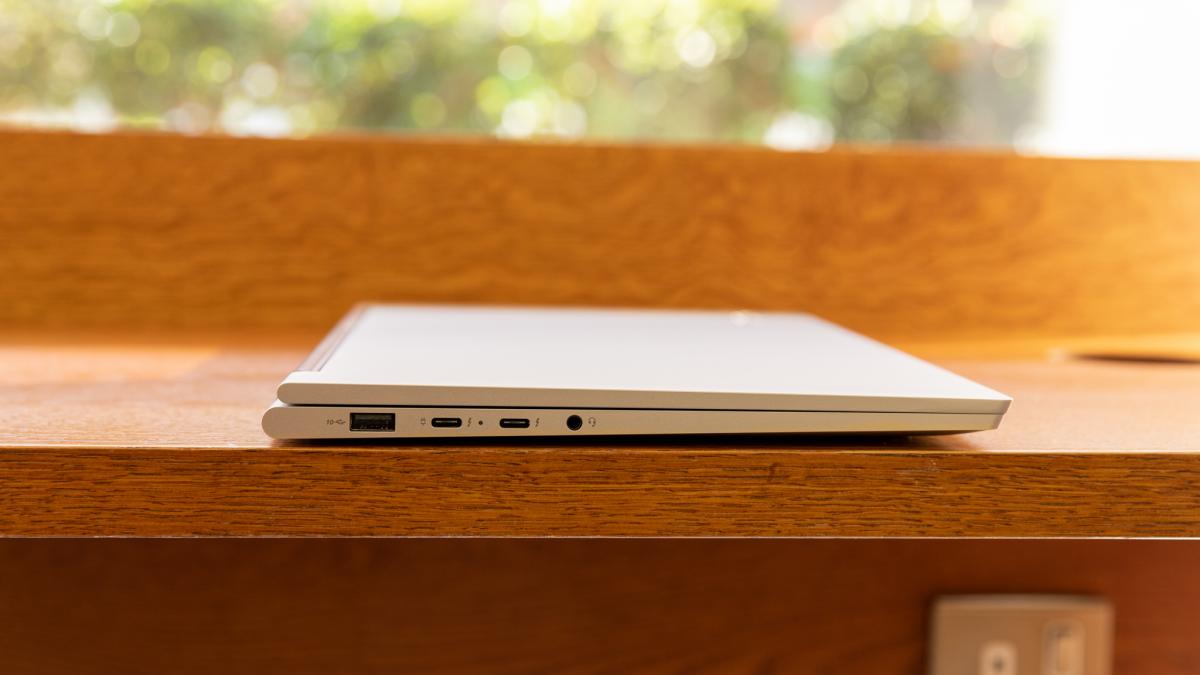 The Lenovo Yoga C940 can be configured with either a 14in 1080p touchscreen or a 4K display. Both have an aspect ratio of 16:9 and both are stylus compatible. I was sent the former and it performed reasonably well in our display testing.

If you’re going to use the display for any kind of photo editing or colour critical design work, however, do seek out the Intel Graphics Control Panel by searching for it in the Windows 10 Start menu (bizarrely this isn’t where you’d expect it to be – on the context menu when you right-click on the desktop). I found that, with the power saving settings enabled, dynamic contrast kicked in, dimming the display noticeably when there was a lot of dark content on the screen.

With the battery saving guff disabled, I found that the display was decent enough without being amazing. Brightness peaks at 369cd/m2, which is good: a fair notch behind the Dell XPS 2-in-1’s 538cd/m2, admittedly but around the same as the 13.5in Microsoft Surface Laptop 3. The screen’s contrast ratio is excellent at 1635:1 while colour accuracy is good but not astonishing. The display’s sRGB coverage is likewise fine but not amazing at 91.4%. 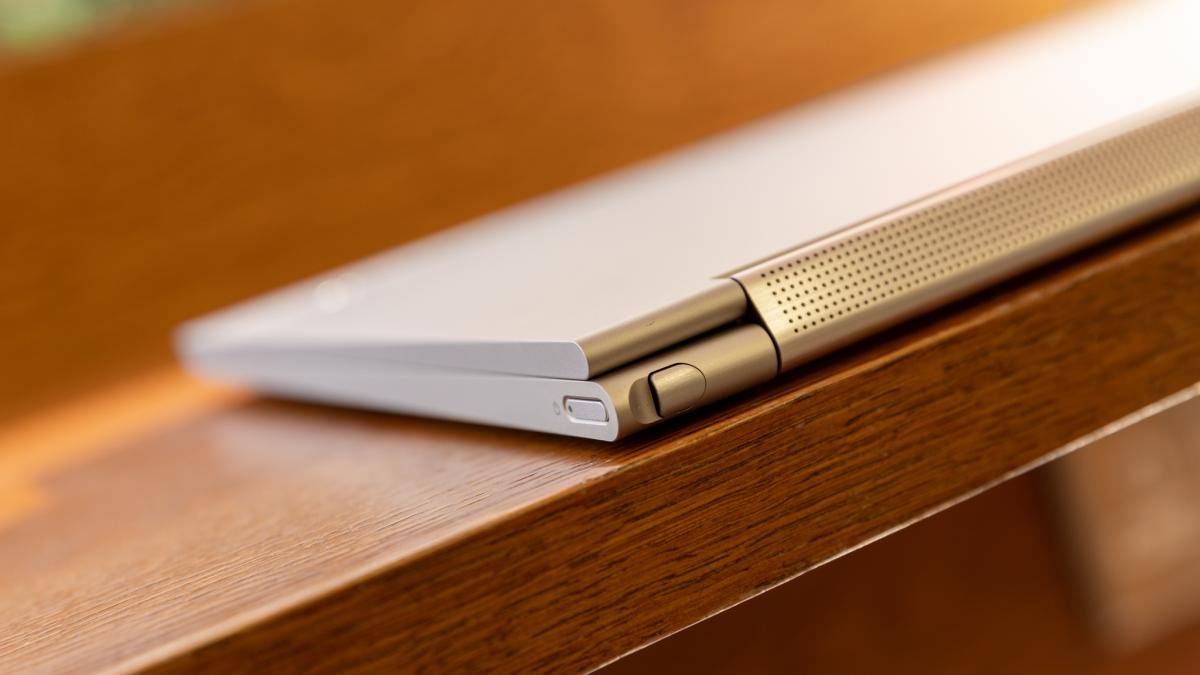 So far, so ordinary. Where the Lenovo Yoga C940 sets itself apart from the crowd is its speakers, which take the form of a Dolby Atmos-branded “soundbar” that stretches across the centre of the machine, in the crease between the screen and keyboard.

These don’t produce much bass but produce audio with a surprising amount of body and volume. I wouldn’t want to listen to much music on the Yoga C940’s speakers but talk radio, podcasts and TV shows? No problem at all.

We’ve so far been impressed with Intel’s tenth-gen mobile CPUs and the Core i7-1065G7 in the Lenovo Yoga C940 is no exception. Backed up with 16GB of RAM in this configuration and a 256GB Samsung SSD the C940 performed impressively in our benchmarks.

As expected, our demanding in-house benchmarks put the Yoga C940 around the same level as both of its tenth-gen, Core i7-toting rivals and significantly ahead of the Core i5-equipped Acer Swift 5 (2019): 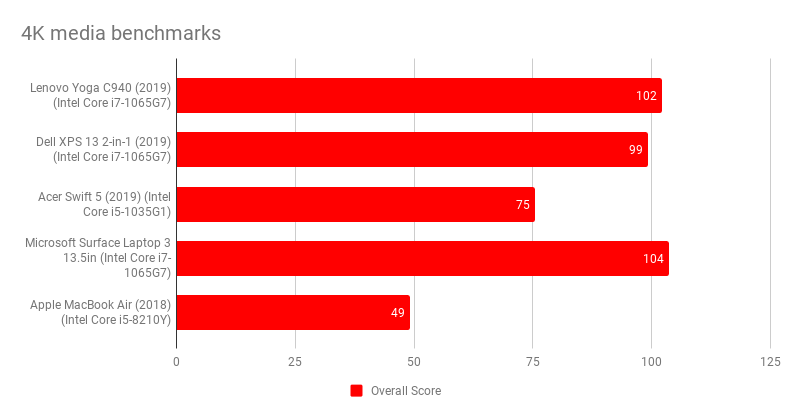 It was a similar story when it came to graphics performance, with the more advanced Intel Iris Plus graphics delive5ring a noticeable performance advantage over the less beefy Core i5 in the Acer Swift 5 and a similar performance to the XPS 13 2-in-1 and Surface Laptop 3. The lower onscreen (native resolution) score is due to the Surface Laptop 3 having a much higher pixel count than the Yoga C940 tested here. 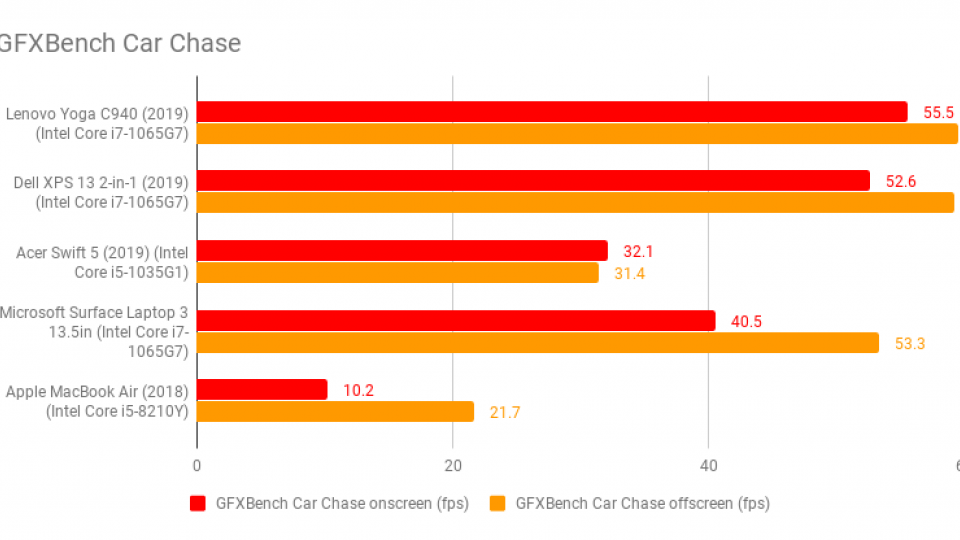 The Yoga C940 put in a strong performance in the storage tests, too, its Samsung SSD achieving sustained read and write speeds well in advance of the Dell XPS 13 2-in-1 and 13.5in Microsoft Surface Laptop 3.

As for battery life, that was even more impressive. With the help of a sizeable 60Wh battery the Yoga found itself streets ahead, lasting an immensely impressive 11hrs 13mins in our video rundown test. That’s a good 2hrs longer than the Dell XPS 13 2-in-1 and three hours longer than the similarly specified Surface Laptop 3. 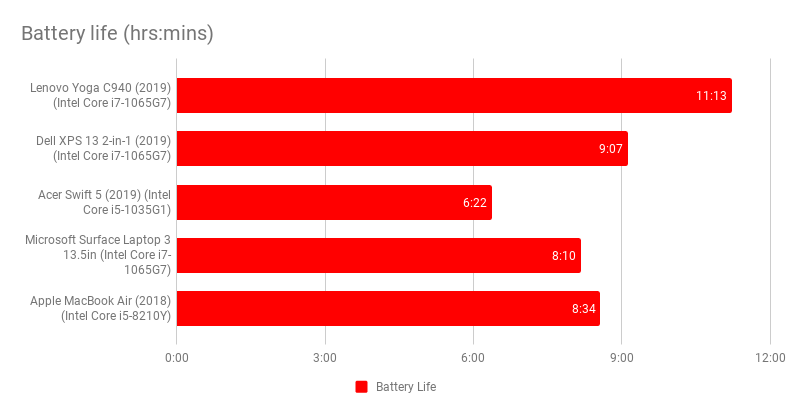 Whichever way you slice it, then, the Lenovo Yoga C940 is a mighty fine 2-in-1. It’s as fast as all its rivals in all the relevant metrics and outlasts them all when it comes to battery life. It has good levels of connectivity, highly impressive speakers and although the display isn’t outstanding, the quality is still very good overall.

Couple that with a sleek, lightweight chassis, a solid 360 hinge and a bundled stylus and you have a laptop that combines great performance and good looks with a keen sense of value.

Don't miss a deal at Marks and Spencer
Best offers at Groupon
Discounts, Sales and Deals at Surfdome
Save your money with Virgin Media
Online-Shopping with Boohoo
Best products at Nike DE
Latest Posts