Lenovo Flex 5 Chromebook review: An affordable 2-in-1 for school or work

At first glance, the Lenovo Flex 5 seems like it should cost a lot more than it does (currently $478 on Amazon). This 13-inch convertible laptop has a 1080p screen, a snappy keyboard, and a 10th-generation Intel Core i3 processor, plus it weighs less than three pounds.

There’s always a catch, though, and in this case, it’s the display. Although it looks sharp enough and offers fine viewing angles, the amount of light bleed around the edges of the display make for an ugly multimedia experience, especially when combined with anemic stereo speakers.

The result is a laptop that you probably wouldn’t want to use for media playback. But if you’re just looking for an inexpensive, browser-first laptop for productivity or schoolwork, the Lenovo Flex 5 Chromebook is a great value.

The Lenovo Flex 5 comes in several versions, but the $410 model we reviewed has the following specs: 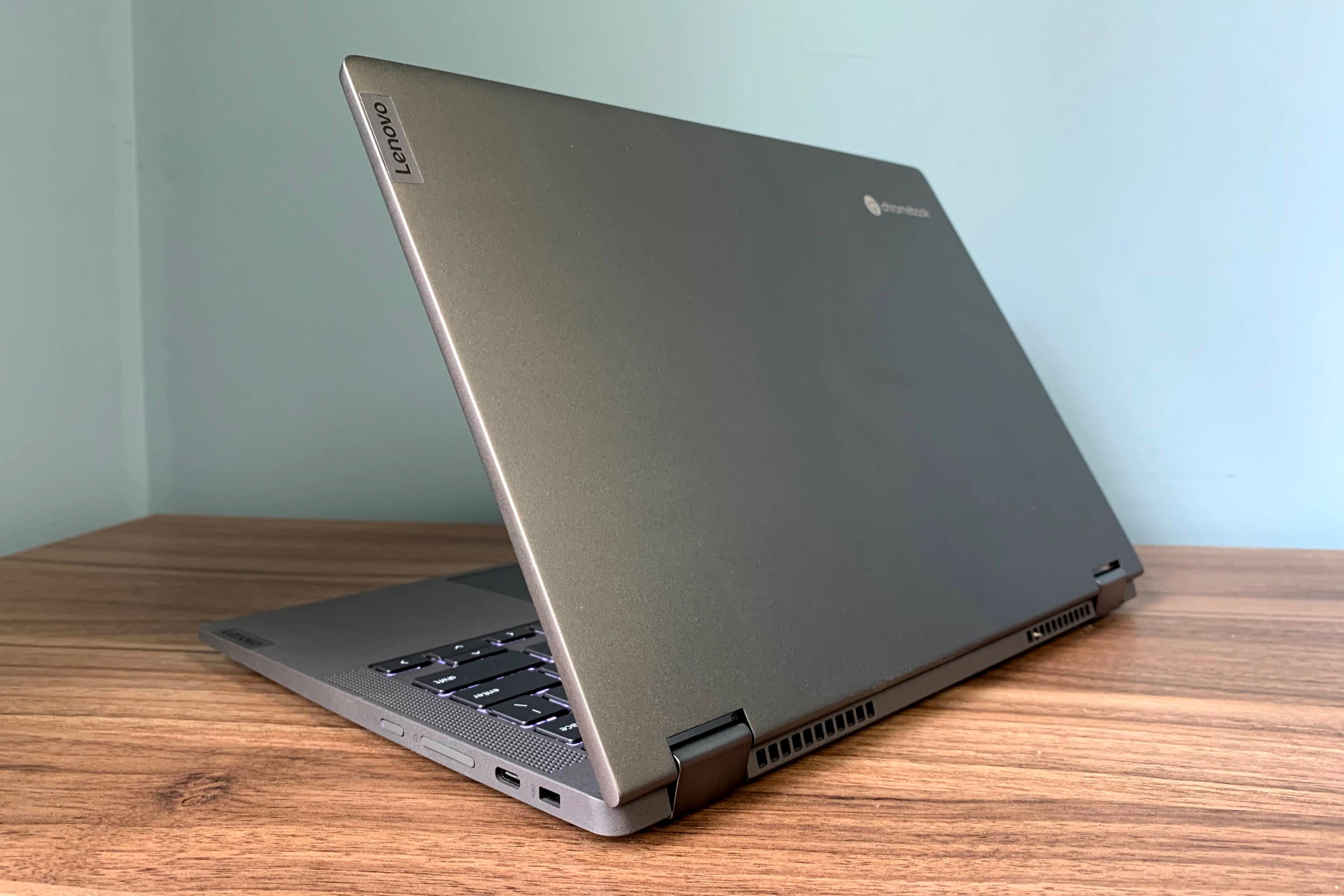 These are pretty much the ideal tech specs for a Chromebook. While Lenovo does offer configurations with a Core i5 processor and 8GB of RAM, that’s probably going to be overkill unless you’re a power user running some demanding Linux applications. Even with an Core i3 processor and 4GB of RAM, you probably won’t notice any slowdowns while bouncing among browser tabs, nor should you have any trouble with Android apps like Microsoft Word. The port selection is solid as well, other than the lack of an HDMI port for connecting an external display.

Lenovo made an unusual decision with the build materials for the Flex 5. While the top cover is made from aluminum, the bottom portion uses ABS plastic. You can feel and see the difference in materials, with aluminum being more reflective and cooler to the touch. Clashing textures aside, the Flex 5 is fairly handsome for a cheap laptop, with sharp side edges and an angular front lip reminiscent of Lenovo’s pricier C740 and C940 Yoga range. 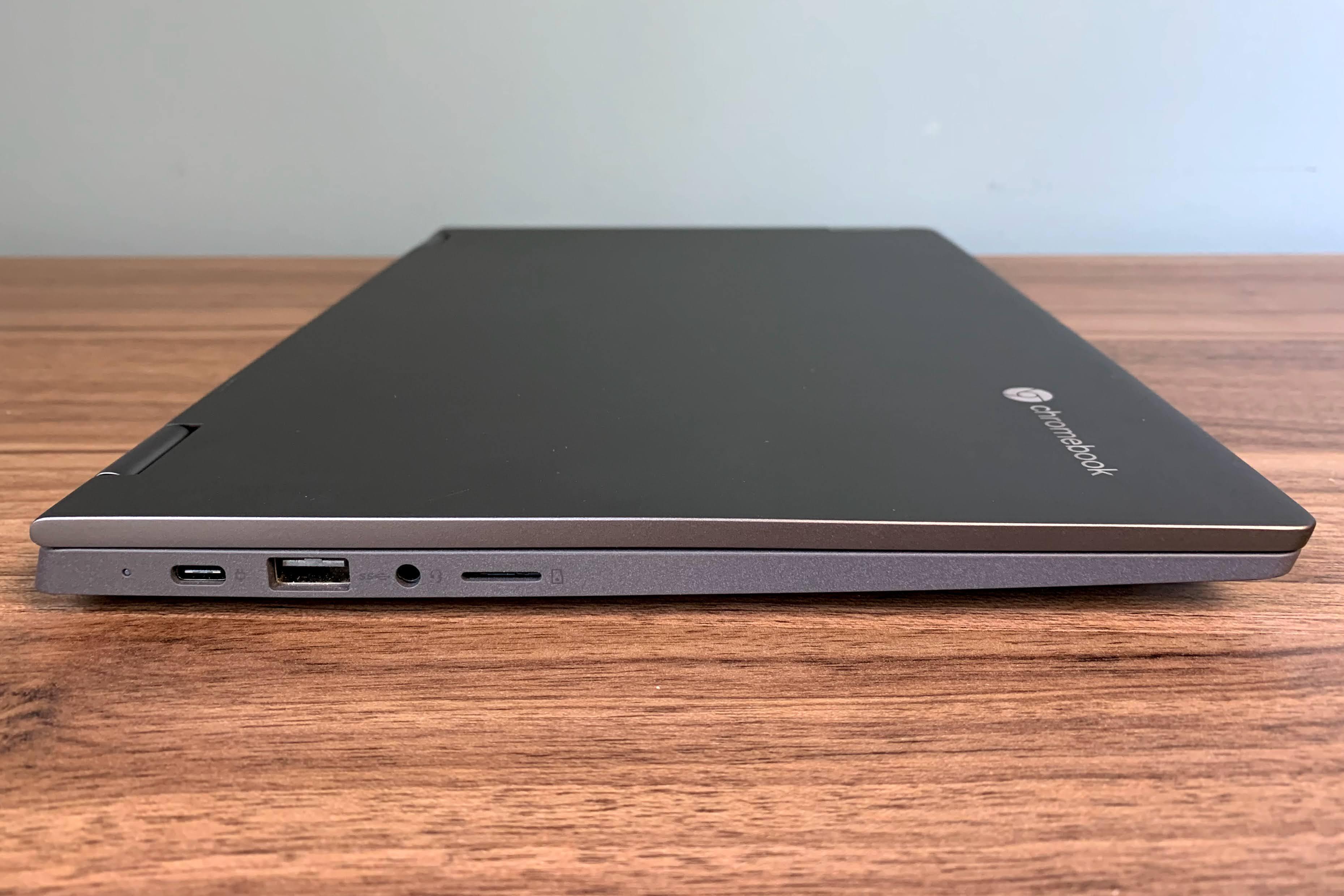 The display feels a lot cheaper, though. While the 13-inch touchscreen can flip around 360 degrees into tablet mode, brightness maxes out at 250 nits, which isn’t ideal for use outdoors or in direct sunlight.

The display panel also has light bleed issues, showing up as blotches of bright light around the edges of the screen. You won’t notice it much on light backgrounds, but it becomes obvious in dark scenes during video playback. And while the Flex 5 technically supports stylus input, Lenovo doesn’t include one in the box, nor does the laptop provide a convenient place to put it. 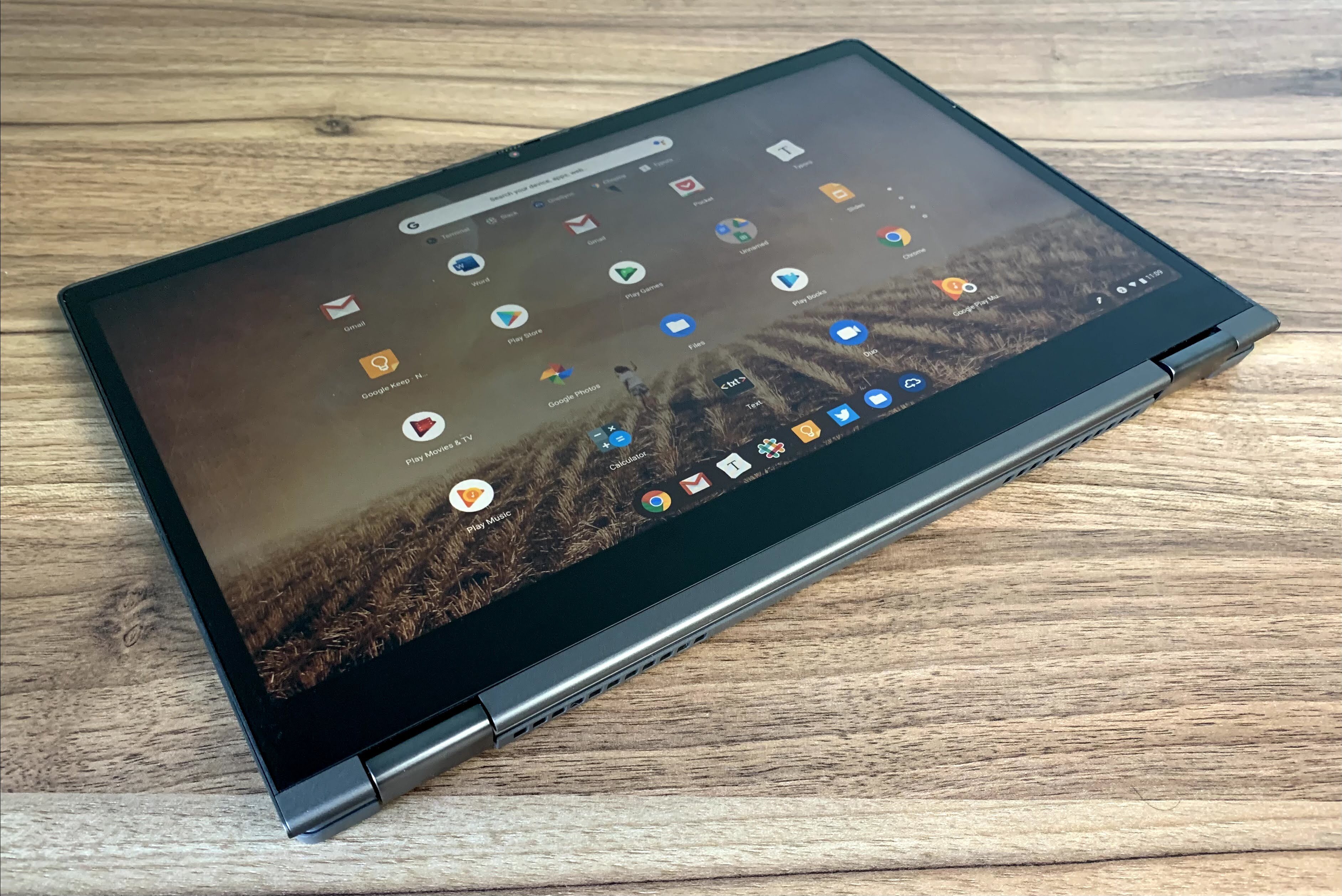 If you like a quiet keyboard, you’ll love the one on the Flex 5. The backlit keys barely make a sound when you depress them (though the space bar’s a bit louder than the rest), and they provide a nice little bump as you press down. Unlike Lenovo’s pricier laptops, the Flex 5’s keycaps don’t have the rounded (or “scooped”) bottom edges that are supposed to match the shape of your fingers, but that didn’t slow down my typing in any noticeable way. 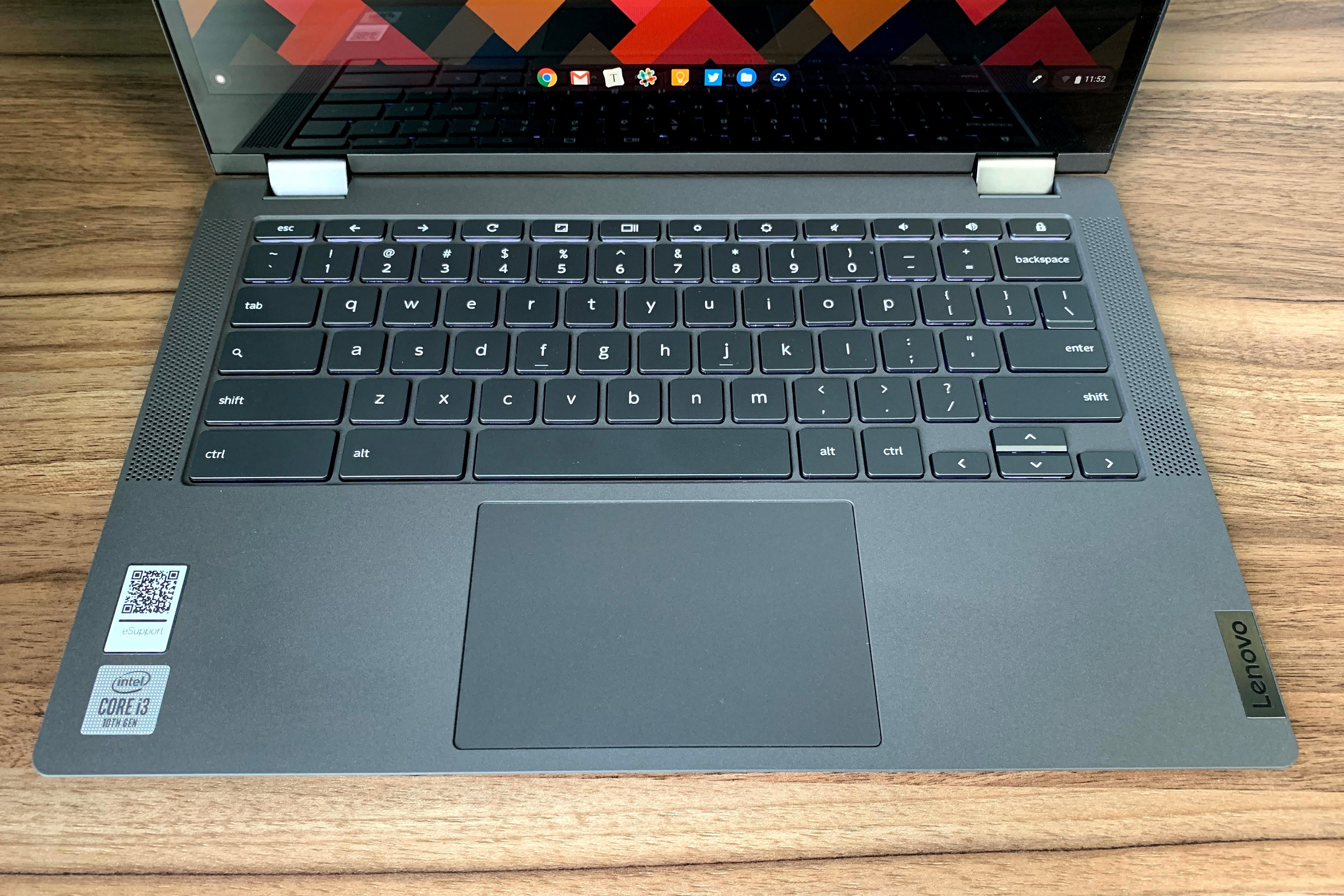 The trackpad, meanwhile, is as large as what you’d find on Lenovo’s more expensive Yoga, but unfortunately it’s not quite as smooth. Apply too much pressure, and your finger will skip across the trackpad as you try to move the cursor around. Like a lot of other PCs, the click mechanism is also on the stiff side, and it gets stiffer the farther your finger moves up the trackpad. It’s a tolerable trackpad experience overall, but not a great one.

The Flex 5 Chromebook’s multimedia components are about as average as you’d expect for this price range. The 720p webcam produces bland and grainy videos, so you’ll look no better than the vast majority of other folks video-chatting from their laptops. The camera does, however, include a physical privacy shutter that you can slide over the lens.

Unfortunately, there’s no microphone shutoff key for quickly disabling the Chromebook’s Google Assistant features. To stop Assistant from listening, you’ll have to dig into the Flex 5’s settings menu. 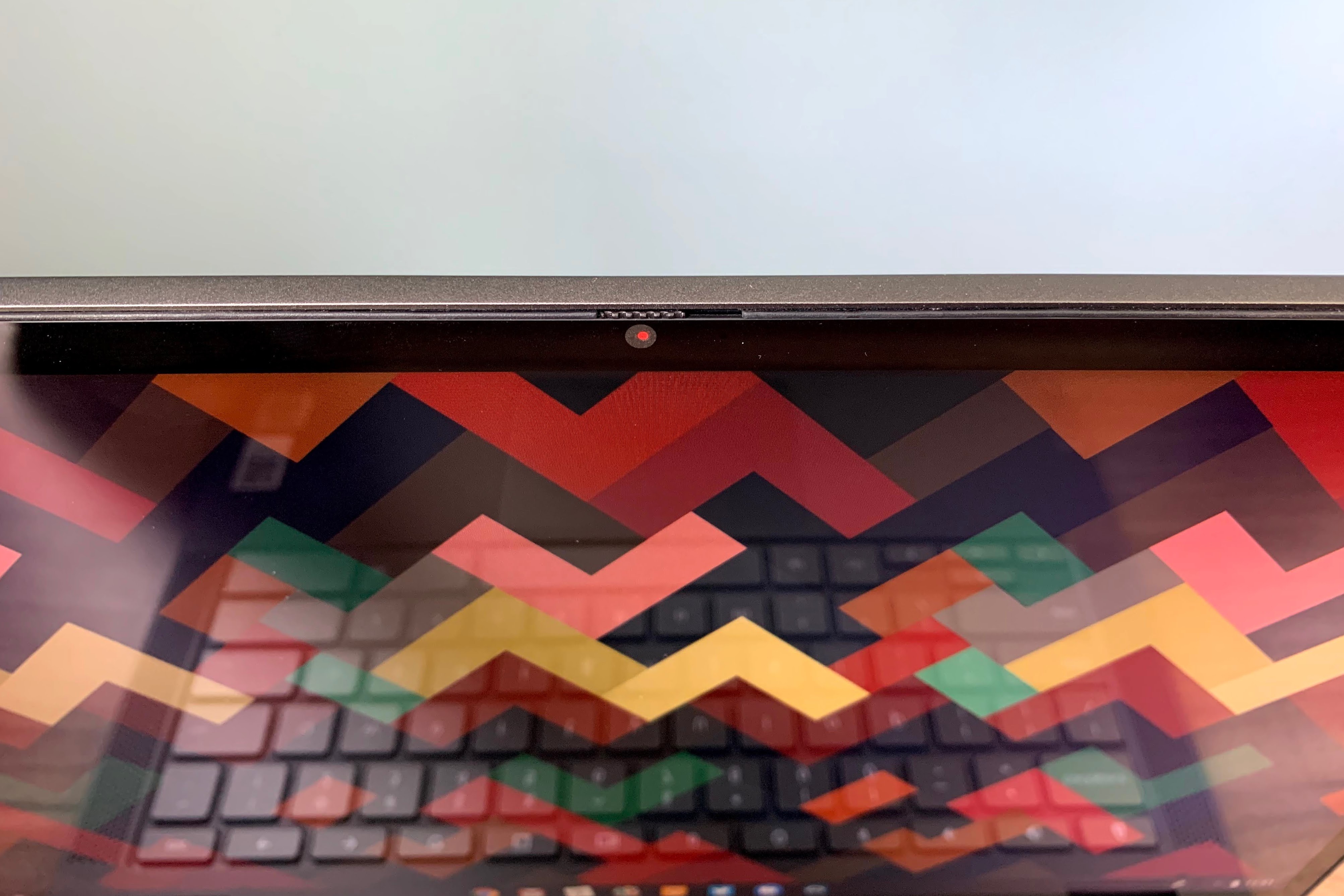 Speaking of audio, the speaker grilles on either side of the Flex 5 keyboard look like they’d pack a punch, but in fact the 2W speakers have practically no bass and don’t get very loud. They do at least offer some decent stereo separation.

To reiterate, this is not a high-performance Chromebook. Its 10th-generation Intel Core i3-10110U processor is, however, a cut above the Pentium- and Celeron-powered machines that sell in the $200 to $300 range. Our benchmark testing turned up some surprisingly solid results even compared to some Core i5-based models.

First up is CrXPRT 2, a general performance test that simulates a gamut of tasks such as photo editing, note-taking, displaying webpages, and rendering 3D graphics. The Lenovo Flex 5 did come in behind other Chromebooks with faster chips and more RAM, such as Asus’ Chromebook Flip C436, but not by much. 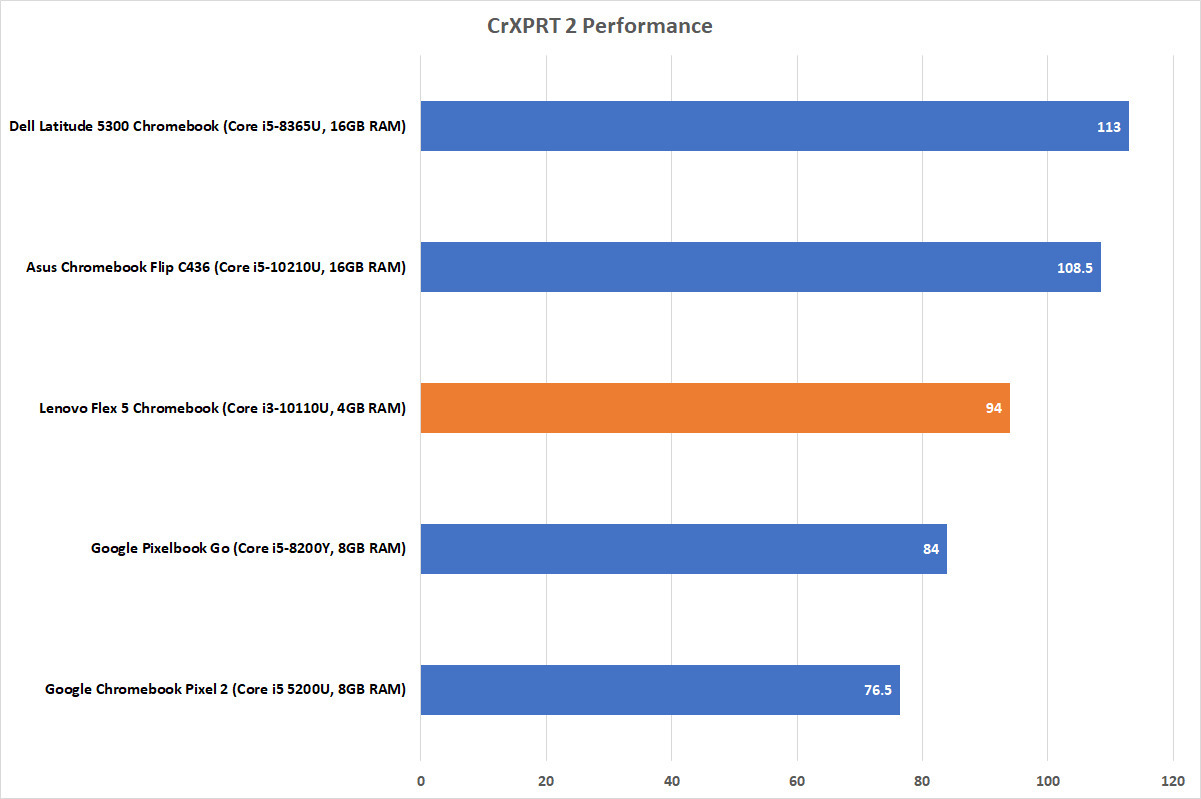 The Flex 5 fared even better in the Speedometer 2 benchmark, edging out the aforementioned Chromebook Flip. This test measures responsiveness in web apps by adding, removing, and checking off items in a to-do list. Anecdotally, I ran into no frustrations using web apps in actual use, and the benchmark test validates that experience. 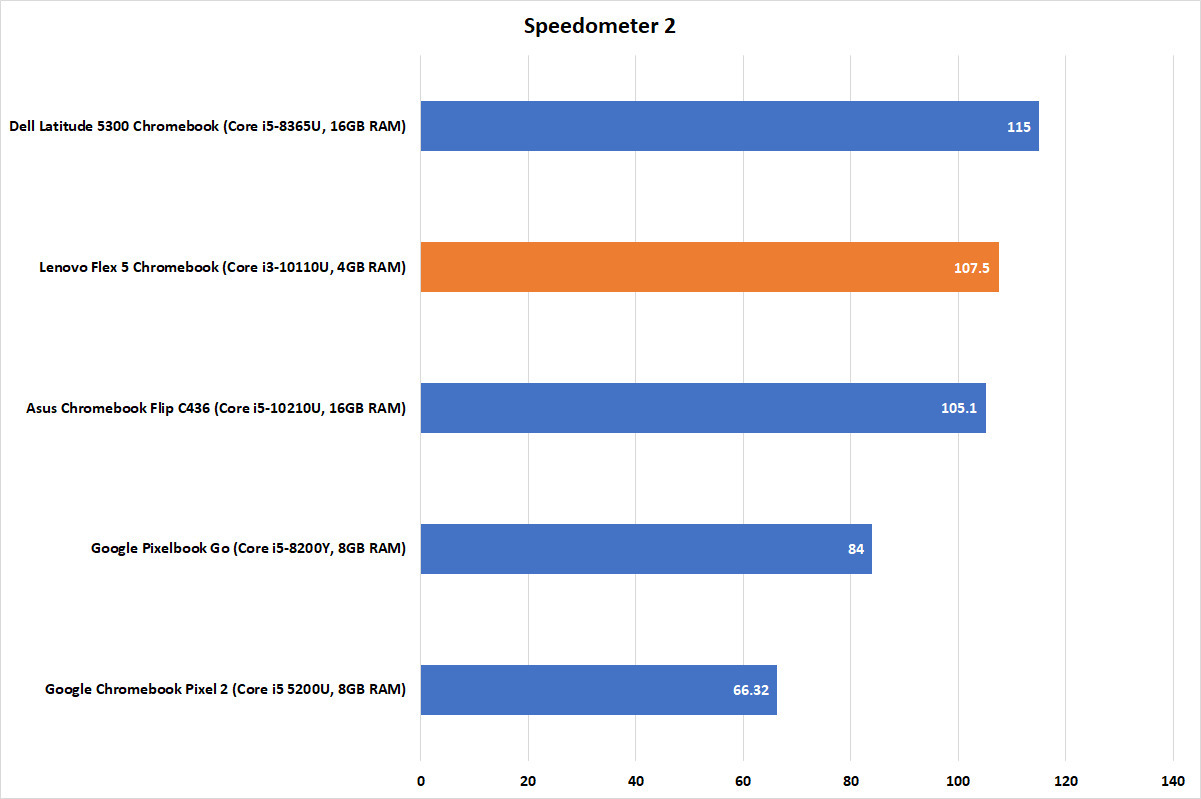 Basemark Web 3.0 was more of an issue for the Flex 5, which isn’t a huge surprise as it tests graphically-intense applications alongside JavaScript calculations. It’s still ultimately a low-performance machine geared toward basic productivity tasks. 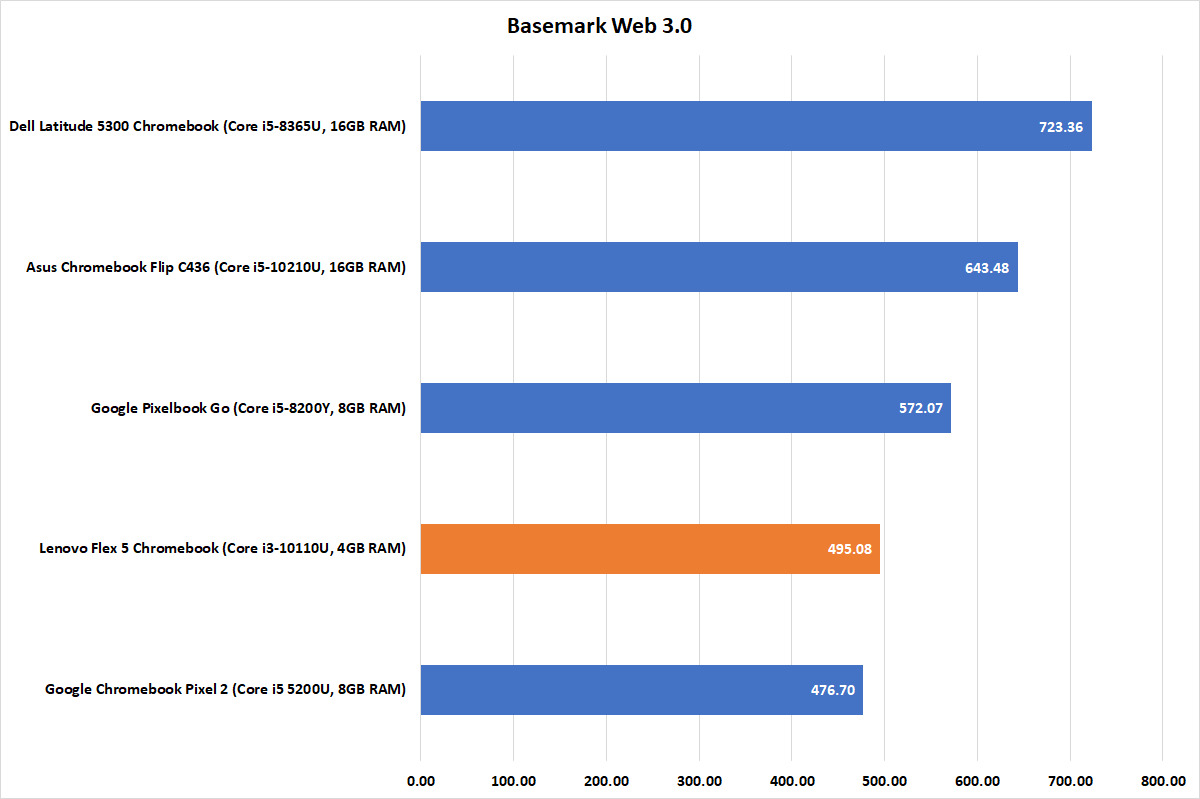 Battery life is a bit of a letdown as well, lasting 8 hours and 47 minutes in CrXPRT 2’s battery rundown test. That’s on the lower end for a midpriced Chromebook, though not terrible overall. It should be able to last through a school day’s worth of remote learning without issue. 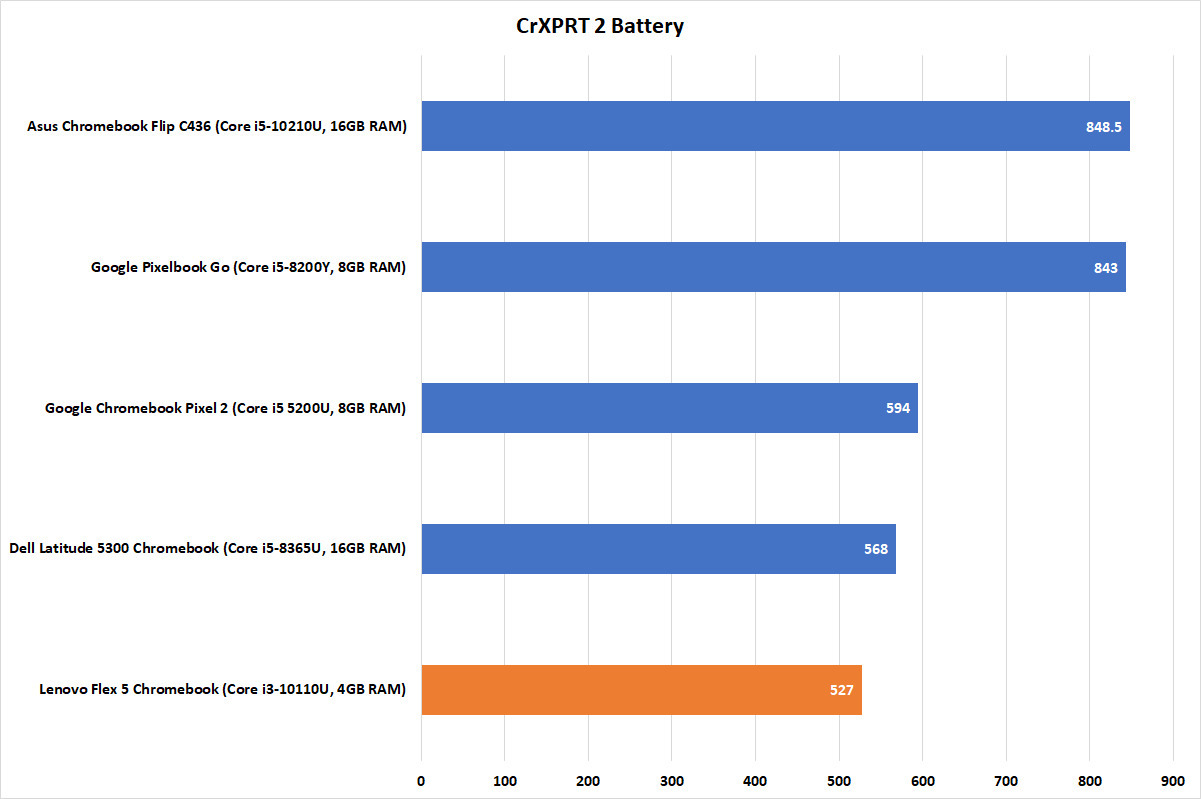 The Lenovo Flex 5 is a good example of a Chromebook that knows what it’s for. The screen’s light bleed issues and audio quality are downers, but they’re not going to get in the way of work or school. The combination of a 13-inch full HD screen, 10th-generation Core i3 processor and 4GB of RAM is just enough to handle basic productivity workloads while staying will under the $500 mark.

Chromebooks in general are not easy to find at their actual retail prices right now, but the Lenovo Flex 5 is one that justifies even a slightly inflated asking price.

The Lenovo Flex 5 Chromebook is an excellent value if you can look past some screen and speaker issues.

Don't miss a deal at Ancestry
Best offers at EE Mobile
Discounts, Sales and Deals at Myprotein
Save your money with Virgin Media
Online-Shopping with Adobe
Best products at Mobiles
Latest Posts