Kingston A2000 NVMe SSD: Fast and cheap, at 10 cents per gigabyte

As out headline trumpets, the big news here is a new low in NVMe SSD prices, at 10 cents per gigabyte. The drop comes courtesy of Kingston’s new A2000, which also offers surprisingly good performance the vast majority of the time.

The A2000 is a 2280 (22 mm wide, 80 mm long) M.2, PCIe 3.0 x4, NVMe SSD, that’s available in 250GB (currently , 500GB (currently $60 on Amazon) and 1TB (currently $100 on Amazon) capacities. I must admit I did a double-take when I saw those prices, as they’re considerably lower than those of the Addlink S70, which itself set a price record only a month or so ago. Commodity items at last! Mostly: 1TB seems to be the sweet spot in price per gigabyte these days. At the time of this writing, larger capacity 2TB/4TB SSDs, SATA or NVMe, were still in the 20-cent-per-gigabyte range.

The A2000s use a Silicon Motion (SMI) 2263 controller and 96-layer TLC NAND. The NAND is all on one side of the board, making it thin enough for nearly any laptop. Caching is done by treating the TLC as SLC, or one-bit NAND. Writing a single bit is far faster than writing three.

Kingston offers a nice five-year warranty on the A2000, though the TBW (TeraBytes that may be Written) ratings aren’t particularly large for this day and age: 150TB per 250GB of capacity. However, that’s probably more than the average user will write in 10 years. TBW ratings are generally used to give a company an out in case someone decides to use a consumer drive like the A2000 in a high-transaction server.

As I said up top, the A2000 is a good performer, if not quite on a par with the fastest drives out there. I tested the 1TB version, and Kingston rates the 500GB for the same 2.1GBps write performance. However, because it has fewer chips to write across, the 250GB version is rated to write at only 1,100MBps maximum. 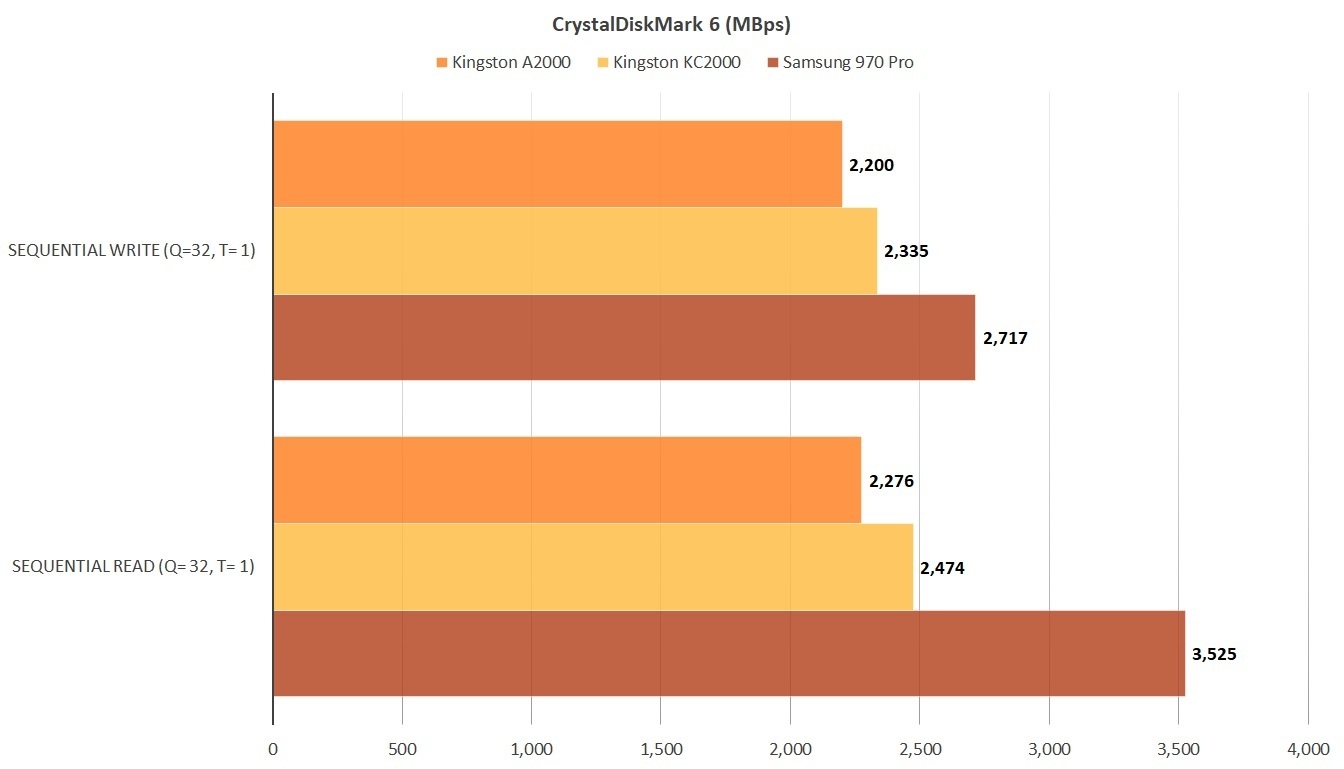 The 1TB version doesn’t slow down during moderately long writes, as evidenced by our 48GB single file write test. It did, however, slow down to just under 500MBps during the 450GB write test. During the first run, that occurred after writing about 50GB of data, but in two subsequent runs write speeds didn’t drop to 500MBps until the approximately 150GB mark. 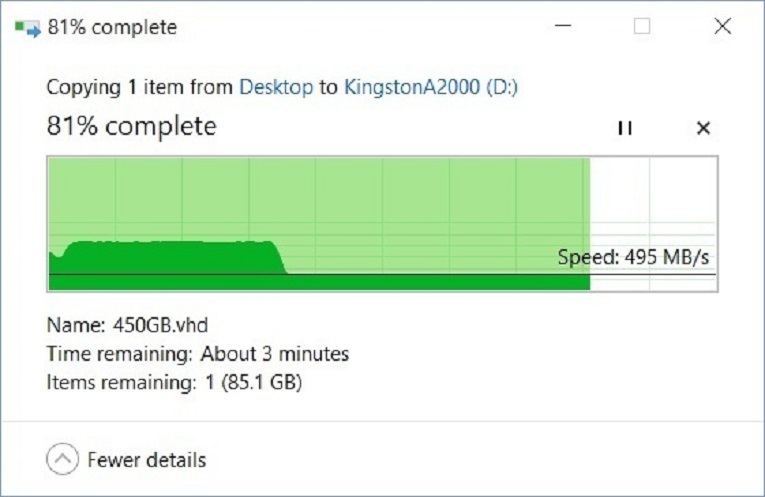 With the smart caching vendors use these days, it’s likely that more TLC was treated as SLC in the latter runs. Note that SLC cache tends to be allotted in proportion to the total capacity of the drive, so it’s a good bet that the 500GB and 250GB versions will drop to 500MBps considerably sooner. 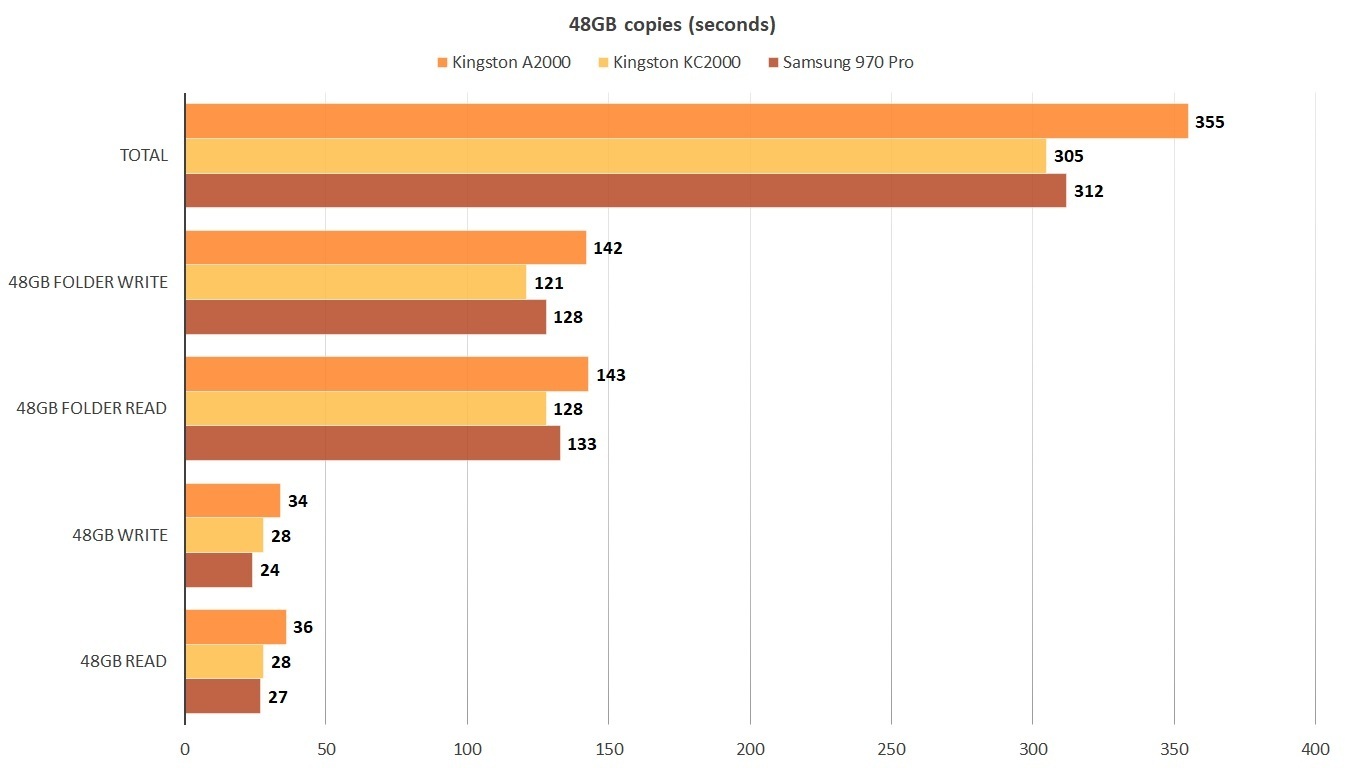 The upshot is that you’ll have to deal with mere SATA speeds on those rare occasions when you write a large amount of data to the drive. That might include an initial cloning, but by and large I’ll give the drive a pass because of the relative rarity of the phenomenon. 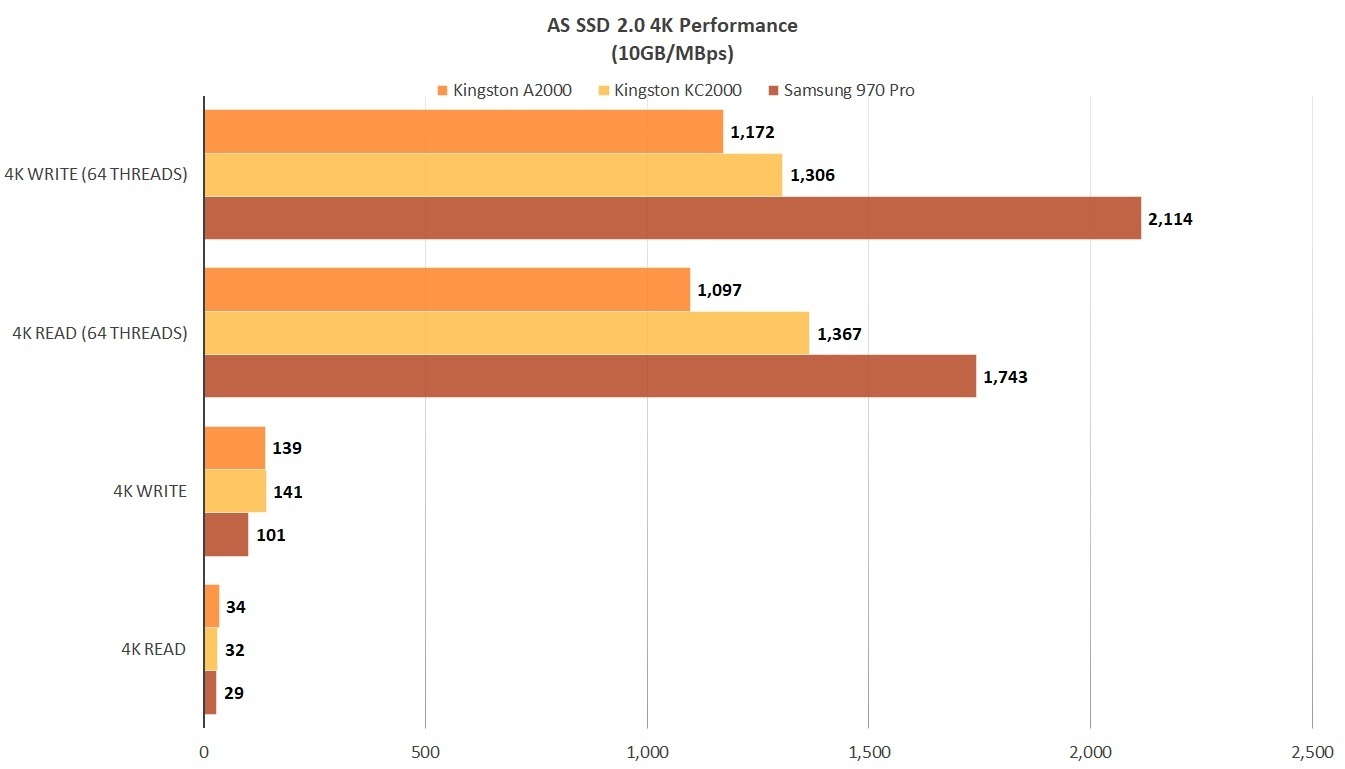 The A2000 is indeed slower than much of the competition, but not enough slower to worry about. Running the Windows 10 OS off of it instead of the Samsung 970 Pro I normally use… I really couldn’t tell the difference. This is NVMe we’re talking about here, and the A2000 features the usual stellar 0.02-millisecond seek times.

Kingston recommends its slightly pricier KC2000 for more data-intensive applications, and it is a bit faster, especially during long writes. But honestly, the A2000 is plenty fast enough for most users, and it’s superaffordable—the best deal I’m aware of. That may change, but this is very competent M.2 NVMe SSD from Kingston at a very, very nice price.

Kingston’s A2000 is a real bargain. It’s plenty fast enough for the average user, and what little you lose in performance you’ll likely never notice.

Don't miss a deal at John Lewis
Best offers at Udemy
Discounts, Sales and Deals at Groupon
Save your money with Sky
Online-Shopping with Sephora
Best products at Microsoft Store
Latest Posts