Kami Wire-Free Camera Kit review: Inexpensive, but you’ll get what you paid for

Kami is YI Technology’s brand for its family of wireless cameras and motion sensors that make up a scalable security system for do-it-yourselfers. Aspirants can kick-off their security efforts with a pair of starter kits: the Kami Wire-Free Camera Kit, reviewed here, or the Kami Smart Security Starter Kit, reviewed by my colleague Christopher Null.

While it’s ostensibly the core of the Kami Home security system, the Kami Wire-Free Camera Kit can also perform as a standalone product, although given its limited features and long-term costs, it might not the best one for most users.

The Wire-Free Camera Kit includes three components: a wireless camera that delivers 1080p resolution, the camera’s base station, and a battery charger with an extra battery. 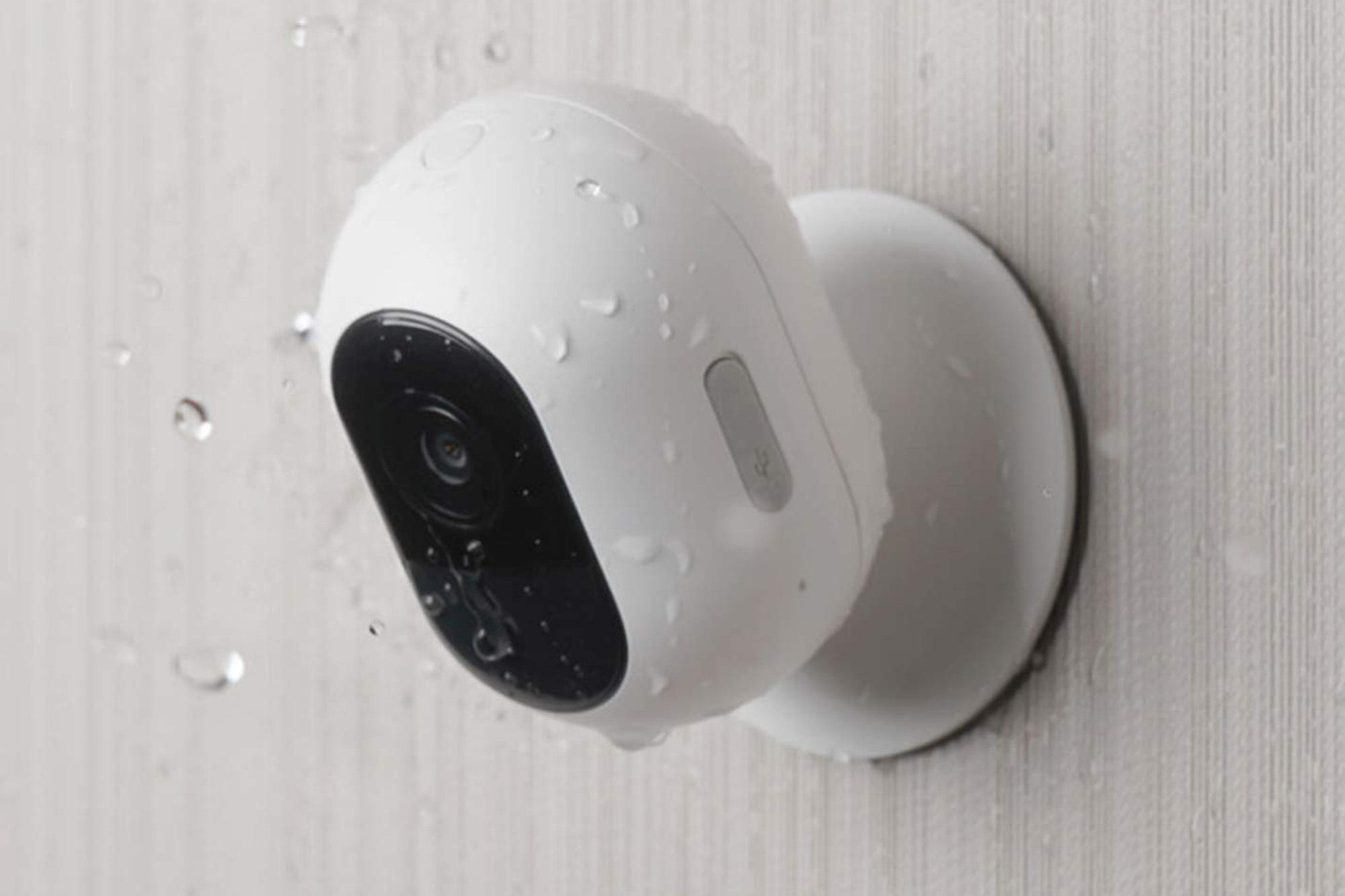 The camera has a white, oblong body and weighs about seven pounds with its battery inserted. It has a 140-degree wide-angle lens and includes motion detection, two-way talk, and night vision up to 5.5 meters (about 18 feet). It’s also been weatherproofed for outdoor use—it has an IP65 rating indicating it’s dust tight and protected against jets of water from up to a 6.3mm nozzle. It has an operating temperature ranging from -14 degrees to 122 degrees Fahrenheit.

The palm-sized base station connects to your 2.4GHz Wi-Fi network and communicates directly with the camera as well as the Kami motion sensors (sold separately). It can support up to four cameras and an unlimited number or sensors.

The battery charger is a simple white plastic bracket that plugs into an outlet with a microUSB cable and adapter. You just slot the battery and lock it in place; four LEDs on the front display the charging status. 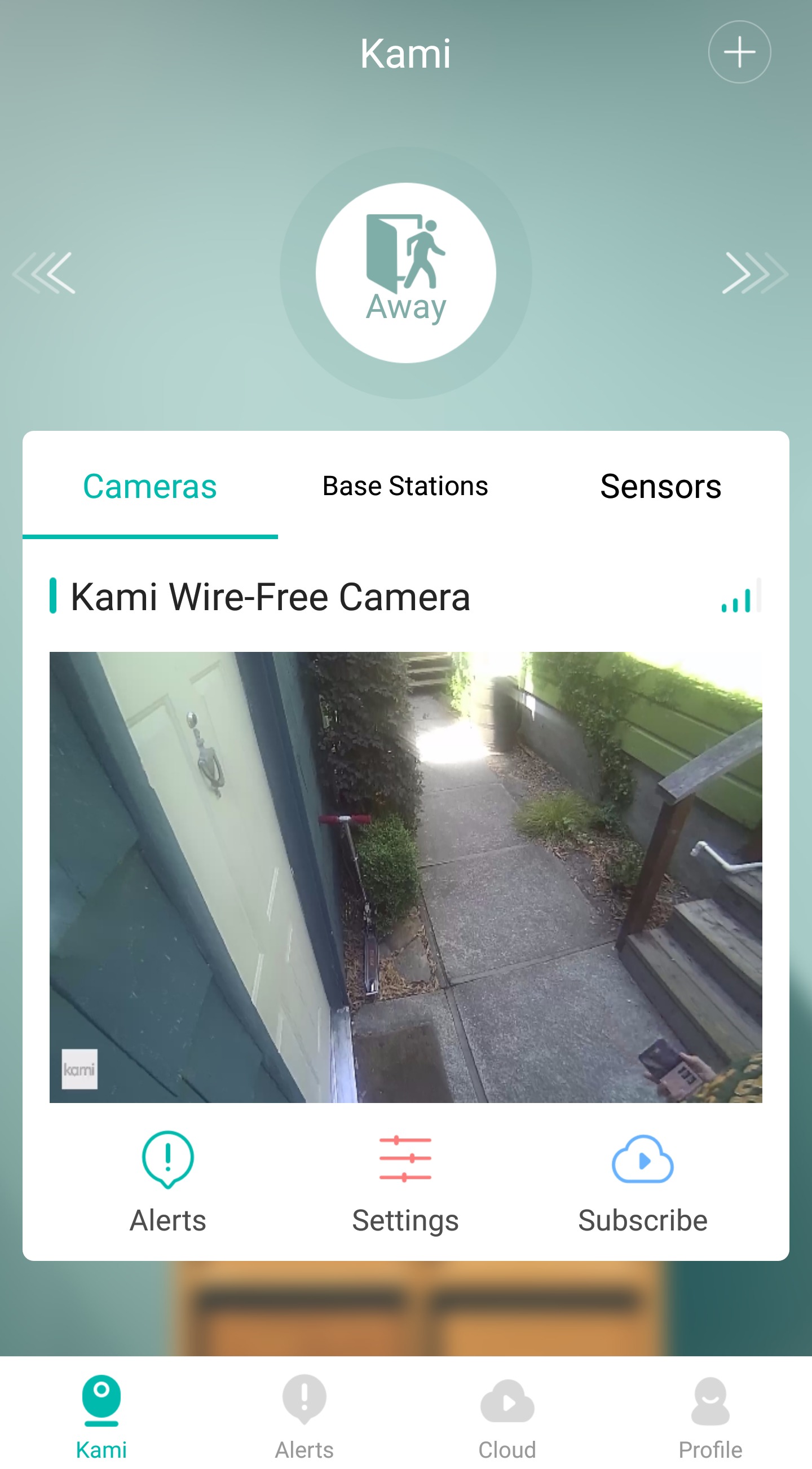 Kami saves motion-triggered video clips for seven days free with purchase of the kit. Each clip, however, is just six seconds long, which is hardly enough to capture any activity unfolding. To enable usable surveillance footage, you’ll need a paid YI Cloud subscription.

The price plans are divided into two tiers: Standard saves only motion-detected videos, while Premium allows continuous recording. Each tier has three plans: Pricing runs from $66 to $199 annually, and there are monthly offerings as well, though you’ll pay more for those over time. On the upside, there are no limits on how much video you can store with any of these plans.

Before you set up any of the hardware, you need to download the Kami Home app and register an account. The app prompts you through the installation process in the correct order, which is much more efficient than you trying to sort it out yourself from the separate quick-start guides for each device.

The first step is connecting the base station to your router. Similar units in other camera packages are typically bulky, often as large as the router itself, and considerable time is spent figuring out where to place it in your existing menagerie of networking devices. The Kami base station’s roughly 3-by-3-inch size made it easy to slot into the small available space I had. Its power supply was another matter, though.

Both the base station’s power and ethernet cables plug into a combo power/ethernet adapter, which itself plugs into a USB adapter. This creates a three-inch brick that pulls free from wall outlets and power strips under the tension of the cables running from it to the base station and router. It also makes fitting it behind furniture maddeningly difficult. It’s the one flaw in an otherwise elegantly designed system.

Once you have the base station plugged in and powered up, the Kami app prompts you to pair it with your phone. Next you have to install one of the two provided batteries in the camera. For this, you must remove the camera’s back cover, and then swing open the battery compartment door by pressing the release latch. Once the battery is inserted, the camera powers on automatically and the app walks you through the steps to connect it to your wireless network. With that done, it’s a good idea to install the second battery in the battery charger and plug it in, so you have a backup ready. Kami claims the battery lasts about a month on a full charge, which isn’t terribly long, particularly for an outdoor camera. 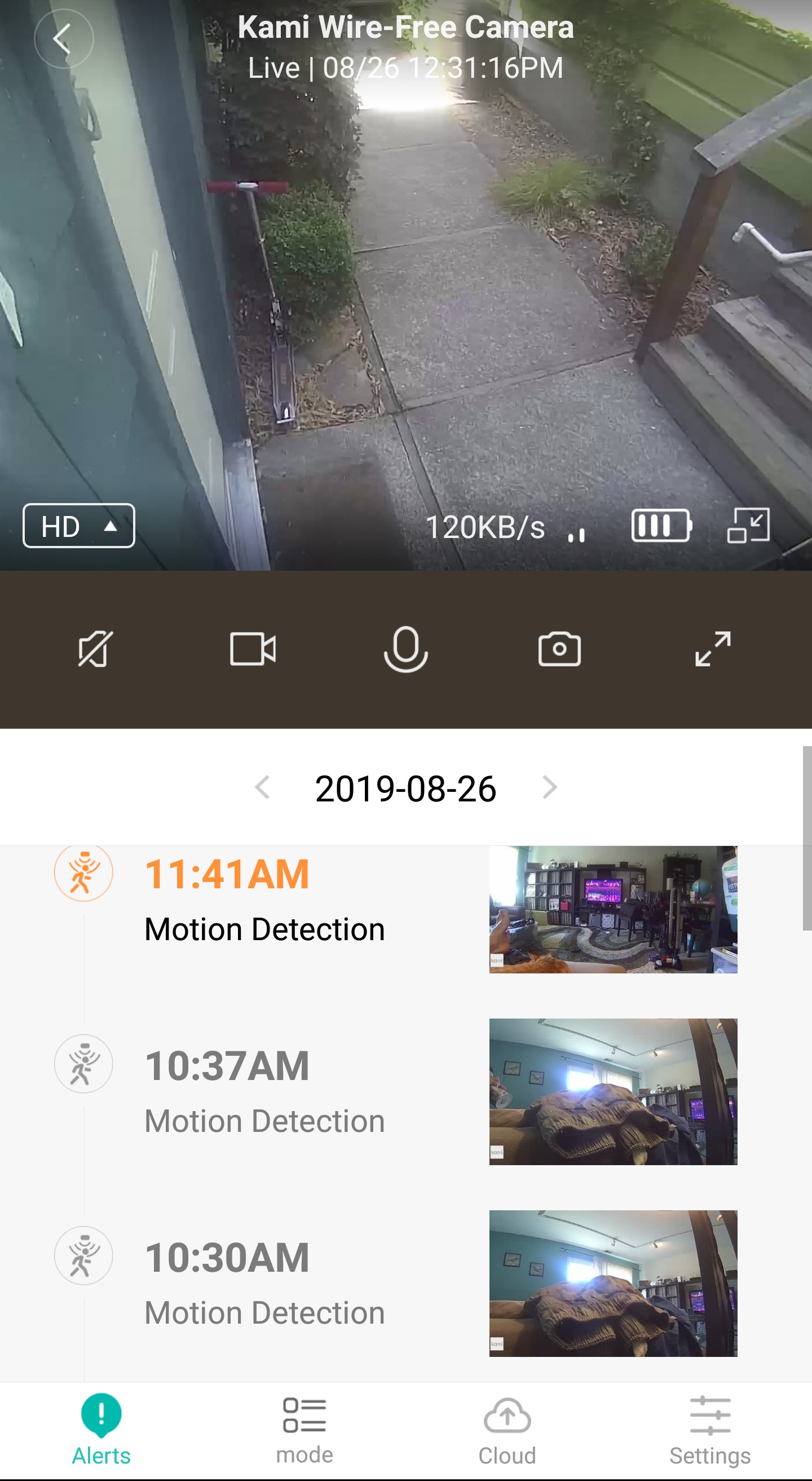 The camera has a magnetic stand that holds the camera and will attach to any metal surface. You can also mount it using a metal plate and screws that come with the camera, and that’s definitely the more secure option for outdoor use.

The Kami app uses a tab-based system to access your various connected devices—cameras, base station, and sensors—from its launch screen. You can arm the entire system when you leave the house by swiping the slider at the top to “Away.” When you return, you swipe it to “Home” to deactivate motion detection and their associated alarms on the camera and any stand-alone sensors.

To view the live video stream, you tap the camera’s image from the camera tab. Along with the feed, the app displays controls for live video recording and two-way talk, as well as a timeline of motion-triggered clips.

Video quality is excellent, with sharp detail and accurate color reproduction. Night vision produced good illumination and contrast, though at only 18-feet, it’s range falls quite short of the 30-or-so feet we’re accumstomed to seeing in other cameras.

The camera was accurate in picking up motion and timely in delivering alerts. There’s no way to adjust the sensitivity of the motion sensor, but there are a couple of ways to reduce the frequency of alerts without simply turning motion detection off. The easiest is to turn down the alert frequency. This is done by dragging a slider from high to medium or low, which incrementally lengthens the activity-detection “cool off” period. The other way is to schedule a time when you want motion detection active—between 8 a.m. and 6 p.m. when you’re at work, for example—and then apply it to whatever days of the week you like.

Beyond these motion detection settings, customization options are pretty slim. You can PIN-protect camera access and deactivate the microphone and night vision. There’s also an option to have videos and photos included in motion alerts, but even though the app includes an on/off toggle for it, you need to have a cloud subscription to actually enable it. 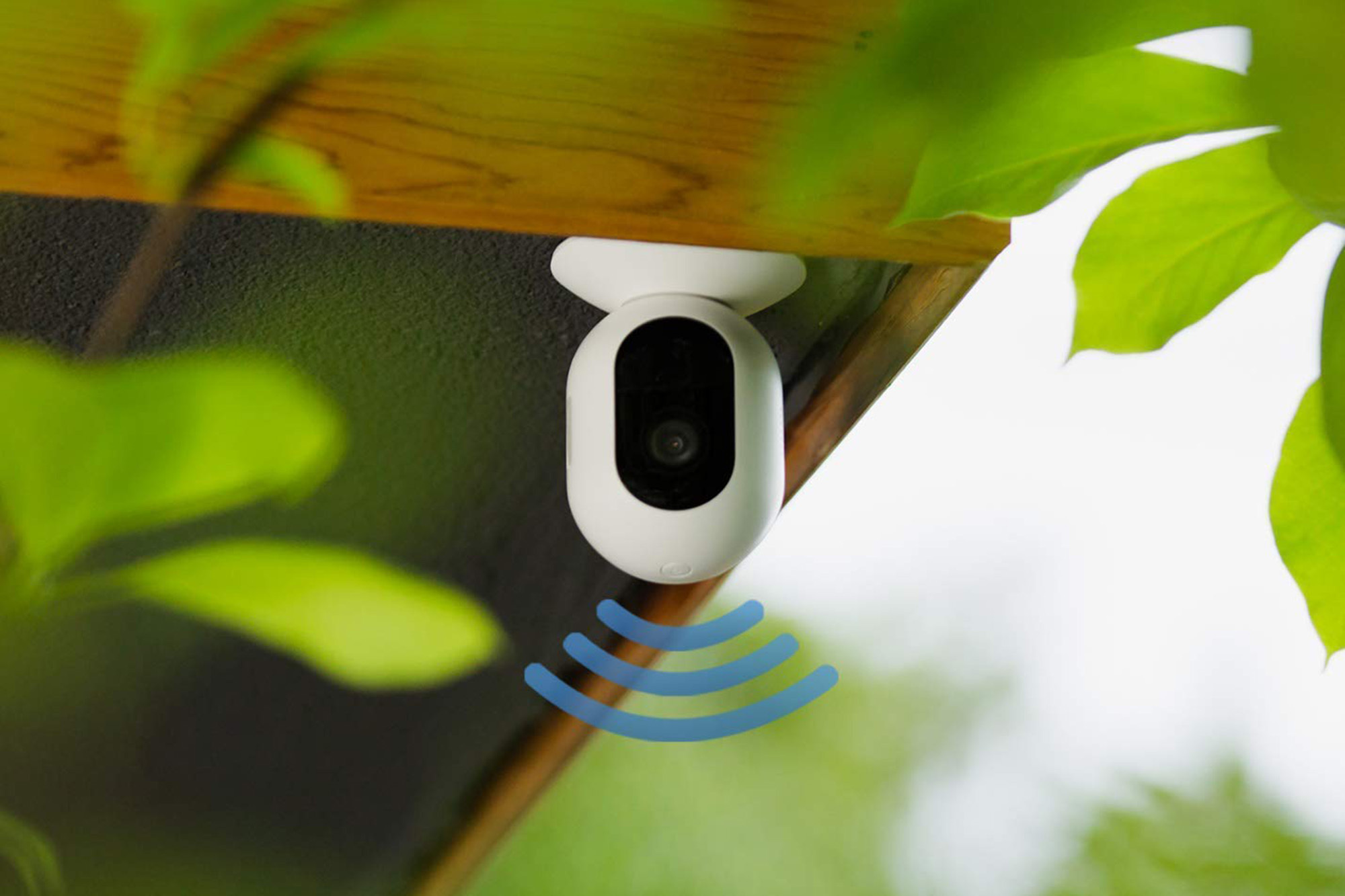 The Kami Wire-Free Camera kit is an easy, relatively attractive way to get started with home security. Its base station’s troublesome power plug aside, the system is well-designed and easy to operate. The six-second video-clip length offered with the free storage plan, however, is far too brief to be of any real use, so the added cost of a cloud subscription is effectively a necessity.

Once you factor that in, along with the camera’s sparse security features—basic motion detection with no person recognition, activity zones, or other surveillance sweeteners—it becomes clearer that may not be the great deal it seemed at first if you’re just looking for a standalone camera to keep tabs on your home. Unless you’re planning on investing in the full Kami Home security system—which we did not find to be at all compelling—our recommendation is to look at other cameras in this well-stocked category for a sense of what’s available before settling on this starter kit.

The Kami Wire-Free Camera Kit is an inexpensive indoor/outdoor video security system, but you’ll need to pay for a subscription to get the best value from it.

Don't miss a deal at Myprotein
Best offers at Boohoo
Discounts, Sales and Deals at The Home Depot
Save your money with Nike DE
Online-Shopping with Intuit Small Business
Best products at Farfetch
Latest Posts