The JBL Link Music is a smart speaker in both design and market positioning. It’s a great value for the person who doesn’t want to pay a lot for a good-sounding smart speaker. Be forewarned, however; JBL’s app is clunky and startup can be sluggish. Hey: you give, you get.

The Link Music is the entry-level model in JBL’s smart speaker line, but it doesn’t compromise much in terms of sonic performance. Especially ripe for placement out in the open, this little thing abides by classic JBL signature sound-shaping: think warm, bright and forward. And it delivers the goods in an evenly dispersed 360-degree pattern, thanks to a downward-firing, high-excursion 2.5-inch round driver powered by a 20-watt digital amplifier with digital signal processing, and two oval-shaped passive radiators facing left and right.

With just one active driver, the speaker’s output is strictly mono. While a combo-punch would probably sound super, you can’t pair two Links for stereo. 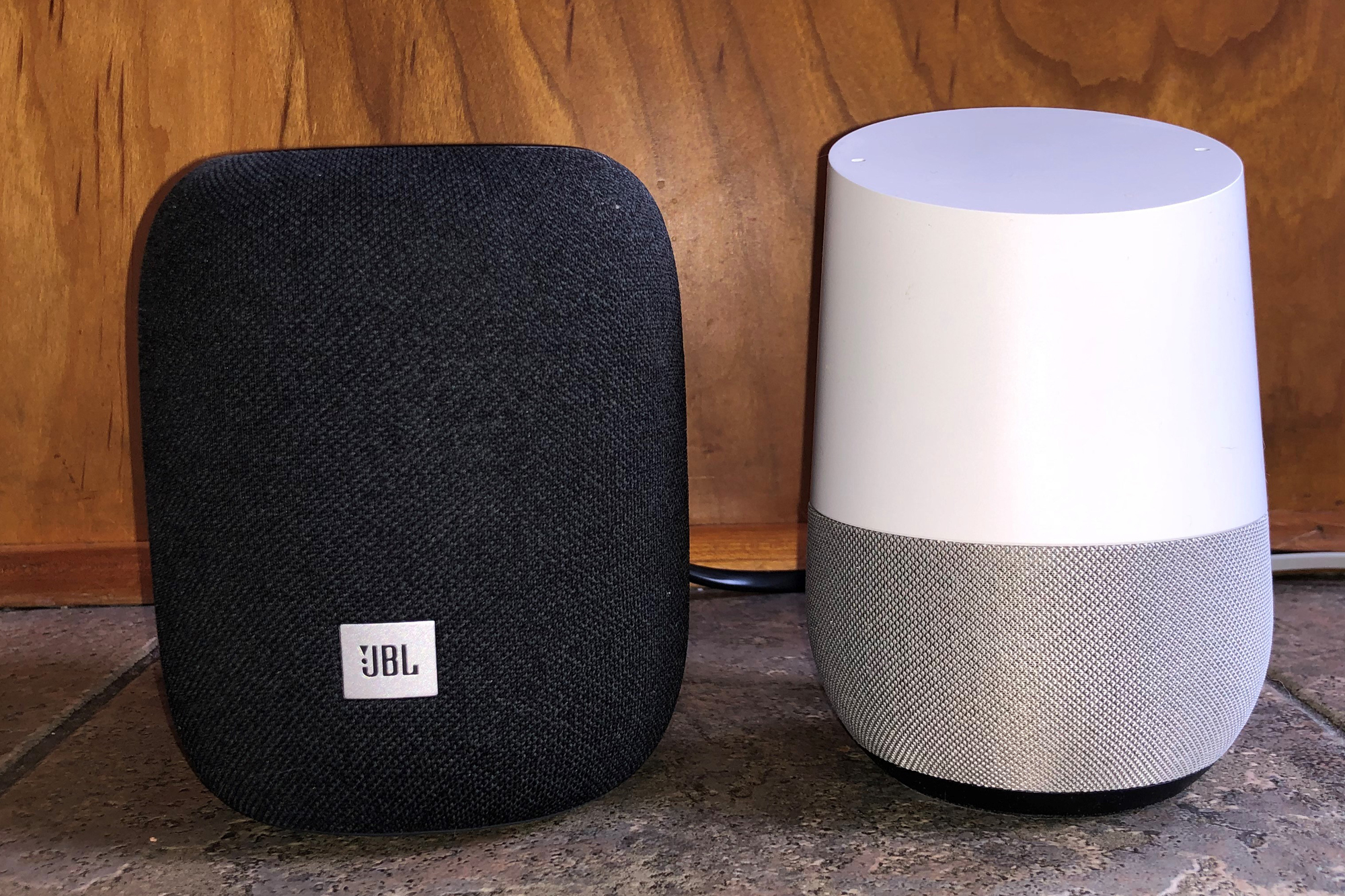 Step back a few feet from the Link and the sound field really opens to fill the room, with special zing and balance when cranked to a medium-loud level. The aural presentation is not as phat-sounding as a Sonos One or Bose Home Speaker 300, but at less than half the $200 price of those rivals, it comes close enough for pleasurable rock, folk, jazz, hip hop, and even hoity-toity classical music entertainment.

JBL’s typical midrange bump pushes vocals and throaty brass soloists forward. Citizen Cope’s rap/rocking political rant “Contact” actually struck home with better clarity on the Link Music than it did on a Sonos One, and he emoted almost as articulately on the JBL as on the brighter-barking Bose Home Speaker 300.

Playing the ultimate (106-track!) Bruce Springsteen concert set “The Live Series Collection” (newly discovered on Napster), I was struck again and again by how much I felt (and miss) Clarence Clemons’ in-your-face concert saxophone wailing. There’s also enough bottom end extension (down to 60Hz) in a Link Music to make the room sway on an electro-dance pop thumper like Dua Lipa’s “Hallucinate,” found on a Spotify fresh hits list. 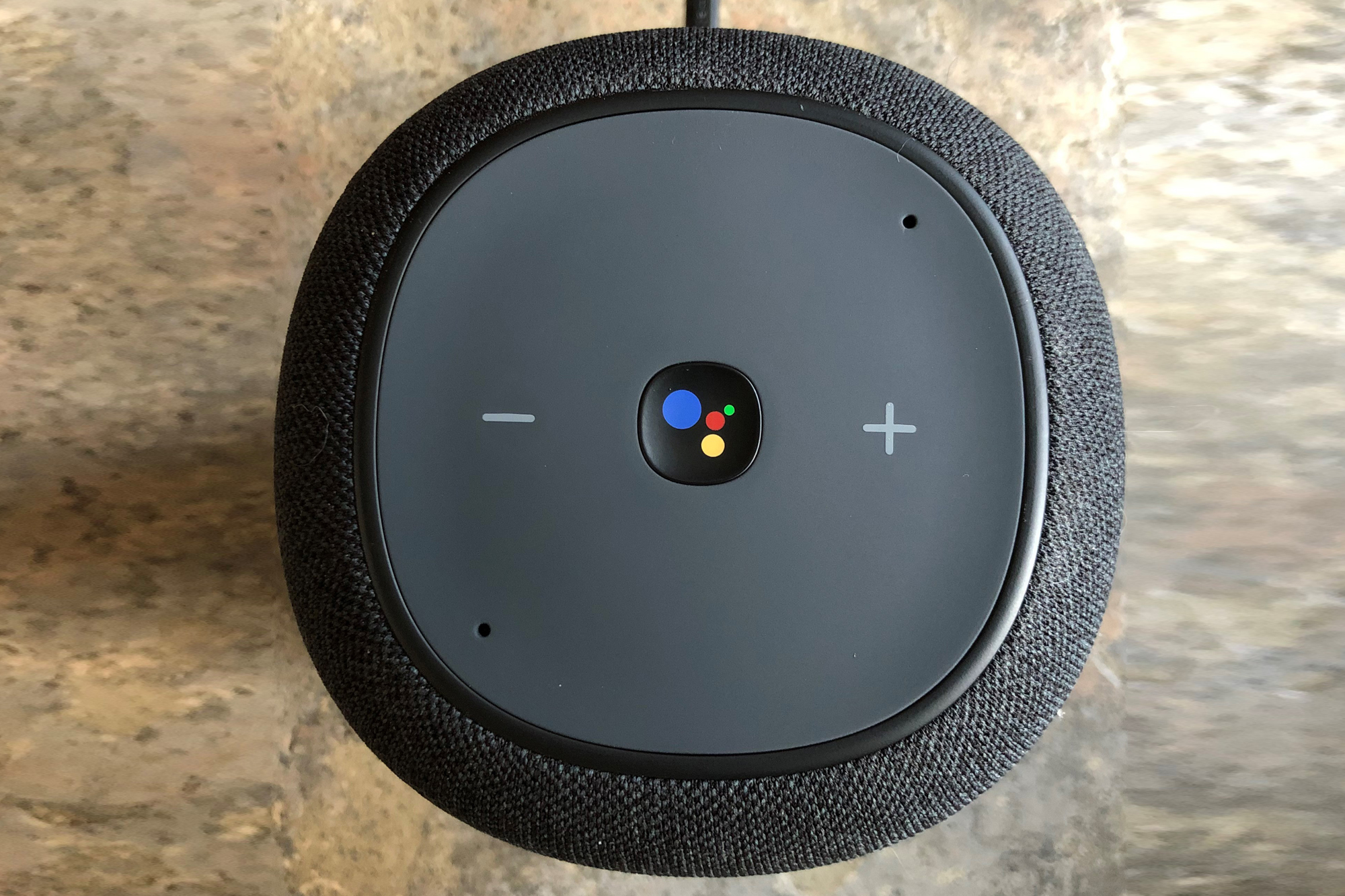 Now being regularly discounted to $79.95 (down from the original $119.95 MSRP), this mighty mite also ticks a bunch of the feature boxes you might be hoping for in a smart speaker. Connecting wirelessly to a home network via dual-band Wi-Fi (802.11ac, but no ethernet port), a JBL Link Music runs on the Google Home platform, takes cues from an iOS 11.0+ or Android OS 5.0+ app, and from Google Assistant-aided voice commands. So, it’s designed to do a lot more than pull in music, internet radio, news, and podcasts. You can also ask the Google Assistant to serve up a recipe; answer a burning question; or command the lights, thermostats, window shades, and door locks in your smart home to do their thing.

The speaker design is non-controversial, blending in with any décor. It’s a boxy but rounded-at-the-corners enclosure measuring 4.1 inches in diameter by 5.3 inches high, wrapped in acoustically neutral black or gray textured speaker cloth. A row of LEDs blink on the front when you wake the thing up with a “Hey Google” command Flush plus/minus buttons on the speaker’s rubbery top control the volume, while a serious, center-mounted Google Assistant button controls playback and alarms and timers. A rubberized bottom kept this thing from creeping across the counter even when the Springsteen crew was in soul-shaking, earth-quaking revival mode on “The Detroit Medley” and “Higher and Higher.”

On the backside, a small panel holds Bluetooth connectivity and microphone on/off switches and the power line connector, the latter mounted about an inch up from the speaker’s bottom. That placement isn’t as clean and neat as an underside power port would be, but the product designers have managed to pack all the electrical guts inside the Link Music cabinet, so there’s no clunky power wart cluttering up the other end of the flat line cable where it plugs into an outlet. Hoping for battery play, too? Uh, not at this price. 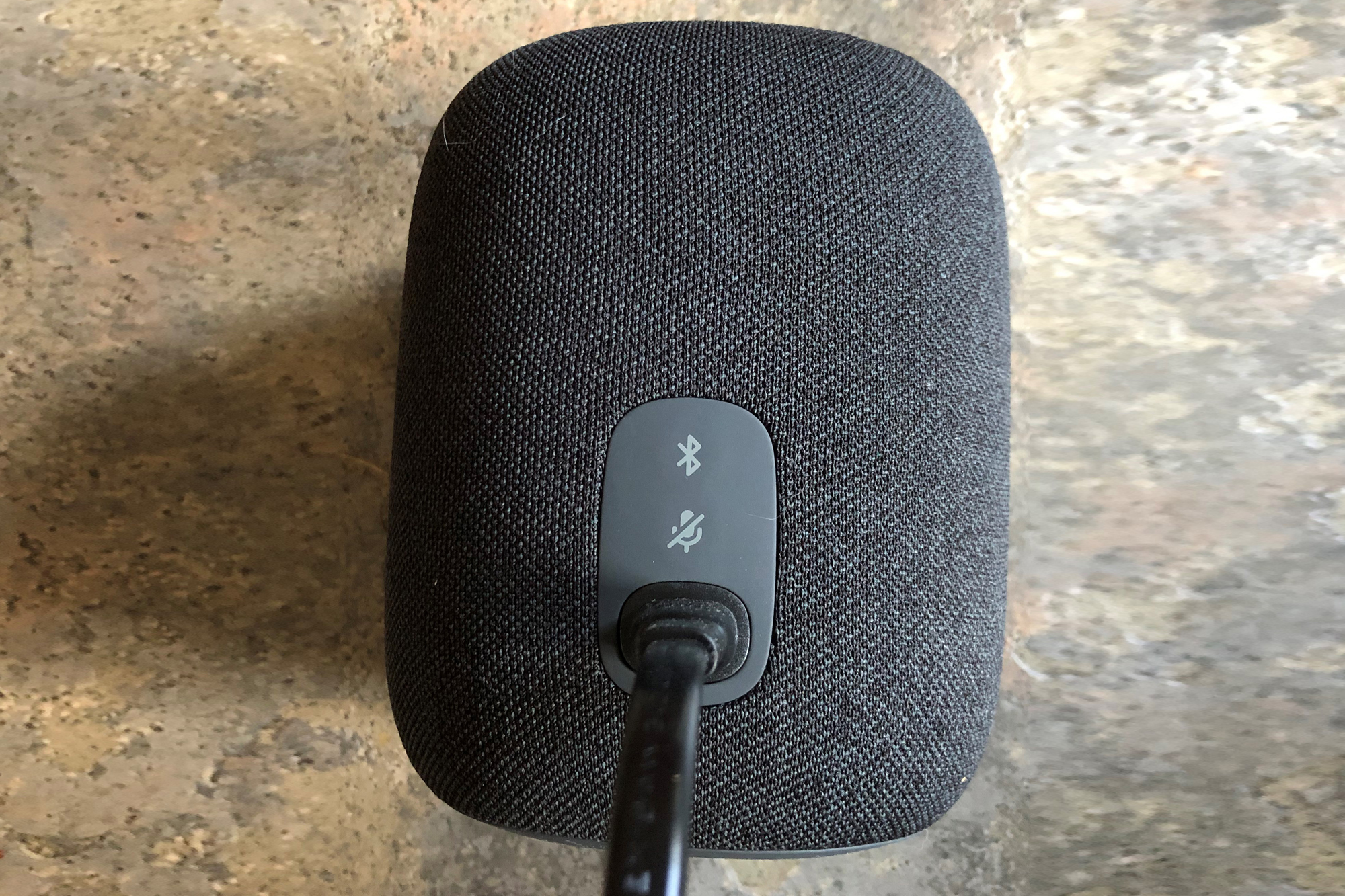 The Google Home app must be installed and an account set up on your smartphone or tablet to get the show going. You’ll also be asked kindly to murmur a few phrases into the speaker’s two top-mounted pinhole microphones, so the Link Music can thereafter understand and respond to you personally. Up to six user voices can be individually registered. If you’ve already done this with other Google Assistant smart speakers, you won’t need to repeat yourself. Despite its Bluetooth connectivity, the Link Music does not have speakerphone capabilities.

Beside music-playing duties, Google Home also identified and sought to connect the Link Music speaker to compatible devices it spotted on my home network (kinda creepy), including a Schlage smart door lock and a Honeywell smart thermostat. Once done, it’s ripe and ready to handle a “wake up” or “I’m home” mission, with preset (or user customized) command strings that, say, light-up Philips Hue bulbs as well as turning on the radio news. Parental controls can also be imposed—automatically shutting off the sound—when it recognizes kids’ voices asking for the wrong stuff.

With such diversity of purpose comes some app roughness and user confusion in operation of the core music-serving chores. 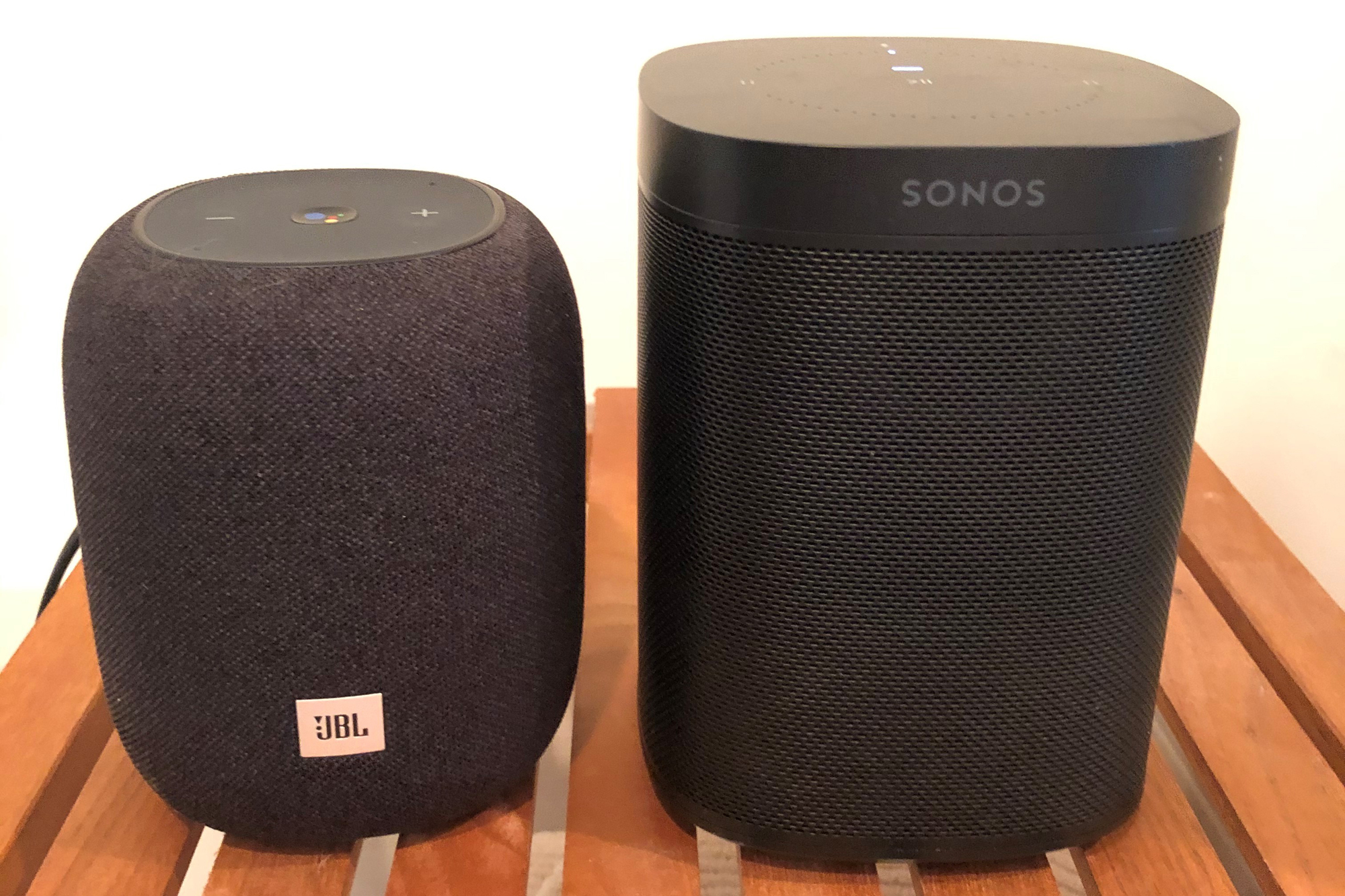 Yes, it’s possible to create a home network of same platform speakers from different makers. I also had a similarly-sized but sonically inferior (and now discontinued) Google Home and a bigger but less feature-packed JBL Link 300 at play in a multi-room test with the Link Music. But setting this up was a balky process that took a few tries to create a speaker group that would then collectively fire-up with a simple voice or tapped command.

I’ve also found that these speakers go seriously to sleep. On startup, it could take as long as three minutes before all three speakers were recognized and accessible on the app screen, with the Google Assistant apologizing “Hmmm… Something went wrong. Try again in a few seconds.” (At least the platform recognized a malfunction and proactively fixed it.)

In my crowded home Wi-Fi environment, the JBL Link Music also suffered sometimes at start-up from a ghosts-in-the-machine sputtering noise that could last from a few seconds to even a full song. This signal interference problem was more prevalent when attempting a multi-speaker group stream. Restarting and limiting the show to just the JBL Link Music speaker righted the playback of Bob Dylan’s aptly named new “Rough and Rowdy Ways,” set on Google Play Music. I’m thinking two or more matched Link Music speakers would probably handshake and cooperate better than a rag-tag assemblage of new and old speakers. 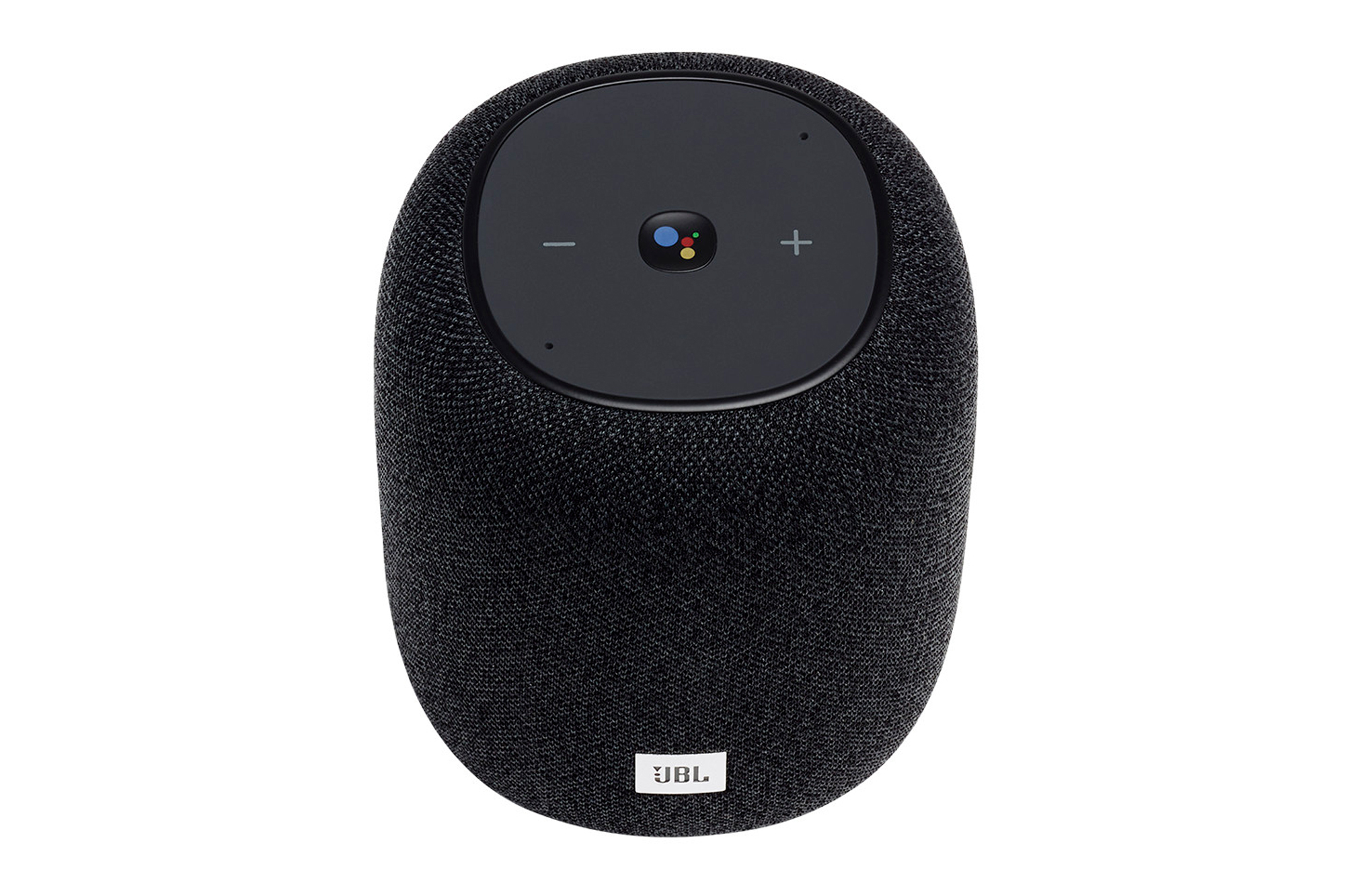 When the stars aligned, the Link Music did remember kindly how I’d previously been working the program: Returning to a pre-selected speaker group and music, and playing in perfect synch with speakers in adjacent rooms or even a floor or two away.

More of a pisser is the lack of an easy-access menu in the Google Home app for browsing, discovering, and selecting music content, as I’ve learned to rely on in the obsessively entertainment-focused apps for Sonos and Bose smart speakers.

That’s less of a problem when you know what you want to hear and have subscriptions to the appropriate services. A Link Music speaker lets you verbally call out requests to free and paid versions of Google Play Music, YouTube Music, Spotify, and Pandora, plus the subscription-based Deezer, SiriusXM, and Apple Music.

Tune-In is the default aggregator/search engine for free internet radio stations on the Link Music speaker (don’t miss our complete guide to internet radio), and it worked even more accurately with Google Voice Assistant than Alexa has (on other speakers) at comprehending my Philly-accented requests.

Several other music services I enjoy weren’t selectable through Google Home: Amazon Music, Napster, Qobuz, and Tidal. But those I can remotely browse, select, and stream to the JBL speaker from my smartphone using Chromecast, Apple AirPlay 2, Bluetooth 4.2. I had the best experience with Chromecast, which—truth be told—is really fetching and casting the selected content from the cloud, rather than from the user’s phone.

So yeah, I had some problems with the JBL Link Music smart speaker, though some were of my own making—because I’ve learned to demand a lot from far more polished, pricey, carefully integrated multi-room smart speaker systems. With expectations more modest, the littlest Link should keep you very entertained.

The JBL Link Music is an affordably priced smart speaker, even if it’s lacking in design grace and can get into trouble in multi-room scenarios.

Don't miss a deal at Argos
Best offers at Surfdome
Discounts, Sales and Deals at EBay DE
Save your money with House of Fraser
Online-Shopping with Mobiles
Best products at John Lewis
Latest Posts