Despite cutting a couple of handy features, the Charge 4 is an impressive fourth entry into JBL’s mid-range Bluetooth speaker series

JBL produces Bluetooth speakers for just about every occasion. Its Go and Clip ranges cater for those wanting ultraportable audio, while the Xtreme 2 and Boombox 2 offer far weightier sonic experiences. Positioned between them is the Charge range, which strikes a keen balance between performance, price and portability.

The fourth-generation model excels in all three of those areas, although the removal of a couple of useful features takes a little shine off an otherwise excellent product.

JBL Charge 4 review: How much does it cost?

The price you’ll pay for the JBL Charge 4 is determined by which colour you’re after. At the time of writing, the grey stone and desert sand models were available from JBL for £114 and £115, respectively, with the midnight black, steel white and ocean blue versions going for £124. If you’re looking for something more eye-catching, JBL offers mustard yellow, dusty pink, river teal, forest green and fiesta red variants in addition to two camo options, all of which cost £160. You’ll find most, if not all, colours available on Amazon, too, with prices starting at £109.

JBL Charge 4 review: How does it compare to the Charge 3?

The Charge 4 may look almost identical to the Charge 3 we reviewed in 2018 but JBL has made a number of tweaks to the speaker’s design and features.

Though still cylindrical, the latest model is larger, with its dimensions having been increased across the board. It now weighs 965g – 165g more than the third-gen model – but this makes no practical difference to the speaker’s portability: it remains extremely easy to carry in your hand or in a bag.

Like its predecessor, the Charge 4 offers IPX7 waterproofing so can be submerged in water up to a depth of one metre for half an hour. It’s well-guarded against bumps and knocks, too, with tough fabric covering the majority of its exterior and rubber bumpers around the passive radiators at either end. The base and flap, which protect the speaker’s connection ports are also rubberised, making the Charge 4 cut out for any outdoors adventure.

In what is a very welcome move, the micro USB port used to charge the Charge 3’s battery has been replaced with USB-C; otherwise, though, the connection options remain unchanged. There’s an AUX-in port and a USB-A port, which enables the Charge 4 to double up as a power bank that can top up your other devices. Battery life has seen no improvement, either, with the Charge 4 offering up to 20 hours of audio playback at “moderate” volume.

Perhaps the biggest change comes in the audio department. Whereas the Charge 3 utilised two drivers to create stereo sound, the Charge 4 delivers a mono experience via a single driver capable of outputting 30W RMS. Moving to a single-channel doesn’t hamper the overall sonic experience, however. Mid-range – which we said felt cold on the Charge 3 – is reproduced with clarity and detail and there’s a measured thump to the bass. 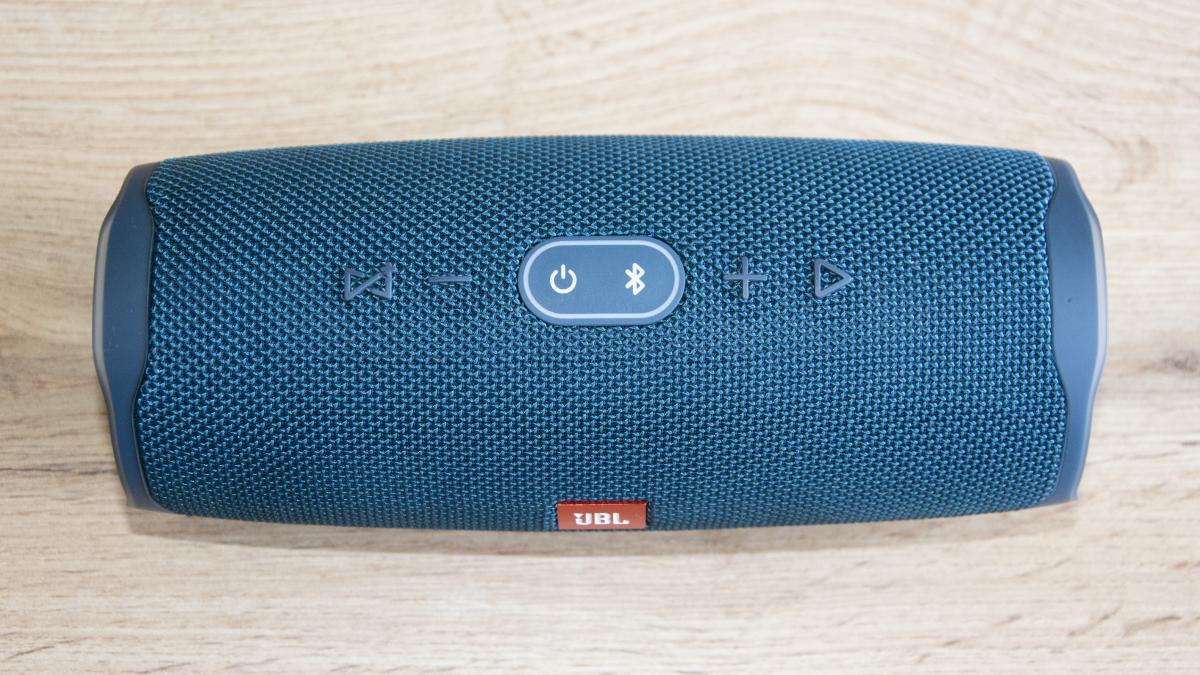 Audio is well-balanced and, for a speaker of its size, the Charge 4 pumps out a striking amount of sound. Pop it in the corner of your living room, turn up the volume and you’ll find the Charge 4 more than capable of filling the space. Like the Charge 3, the Charge 4 handles higher volumes very well, with no distortion as you push it to its limit.

It’s not all good news, however. Voice assistant support and the ability to use the speaker as a speakerphone for calls – both features present with the Charge 3 – have both been removed. Neither could be considered essential features but it stings that the Charge 4 isn’t quite as versatile as the model that came before it.

Those seeking to further bolster their audio experience can pair the Charge 4 with compatible JBL devices using the company’s Connect+ technology. When multiple Connect+ speakers are hooked up to the same audio source via Bluetooth, you can simply press their Connect+ buttons to enjoy a stereo or multi-speaker setup.

It’s a great option to have but comes with a big caveat: Connect+ speakers only pair with other Connect+ speakers. There’s no compatibility with original JBL Connect devices or those incorporating the latest iteration of the technology, Party Boost.

With JBL now exclusively making speakers running Party Boost, you won’t be able to pair the Charge 4 with the company’s recent releases or the Go 3, Xtreme 3 and Clip 4, all of which were announced at a virtual IFA event in early September. A Charge 5 incorporating Party Boost is almost certainly going to materialise sometime in the not-too-distant future but for the time being at least, JBL is remaining tight-lipped. 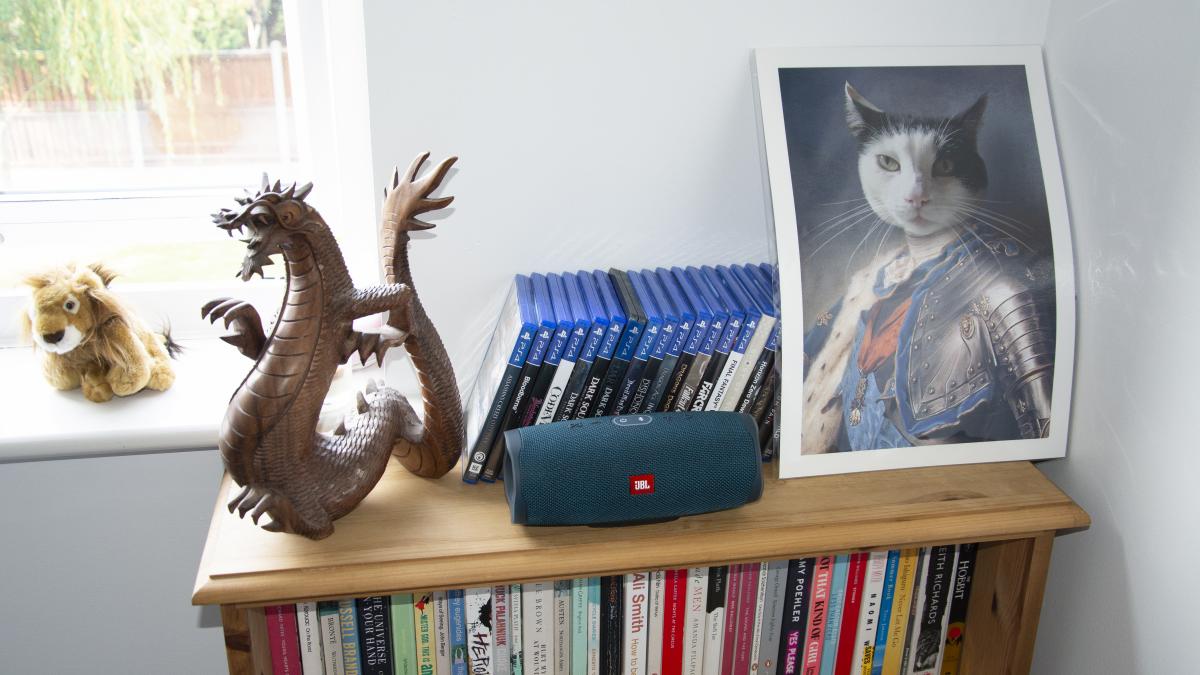 JBL Charge 4 review: Should you buy it?

If you already have the Charge 3, the improved audio on offer probably doesn’t justify forking out for the fourth-generation model, especially as you’ll be missing out on voice assistant and speakerphone support.

However, if you don’t already own a Bluetooth speaker and want one that’s reasonably priced, wonderfully rugged and sounds great, you can’t go wrong with the Charge 4. My only reservation in recommending it is that we’re likely to see a Party Boost compatible Charge 5 within the next year.

JBL Charge 4 review: What alternatives are there?

When it comes to rugged, waterproof speakers, the JBL Charge 4’s main competition comes from the Ultimate Ears Mega Boom 3, which is not only IP67-rated for waterproofing but can float in water.

Those wanting something a little less rough and ready should check out the B&0 A1 2nd Gen: a super stylish speaker that delivers exceptional audio in a dust- and waterproof package.

For a comprehensive roundup of our favourite alternatives, head over to the best Bluetooth speakers page, which includes a buying guide breaking down everything you need to know before making a purchase.

Don't miss a deal at Vodafone UK
Best offers at Boohoo
Discounts, Sales and Deals at The Home Depot
Save your money with EBay DE
Online-Shopping with Carphone Warehouse
Best products at Mobiles
Latest Posts