Intel has expanded its 10th Gen CPU lineup with a new series of beefy models aimed at gaming, creator, and workstation laptops. These models are based on the 14nm ‘Comet Lake’ architecture and fit into Intel’s Core i9, Core i7, and Core i5 product tiers. They are designed for laptops that will be aimed at gamers and professional users who need the highest possible single-threaded as well as multi-threaded performance in a laptop. The flagship Core i9-10980HK model features eight cores and 16 threads, and can run at a peak turbo speed of 5.3GHz, and there are three more Core i7 with turbo speeds of 5GHz or more. Over 100 laptops from all major brands using these CPUs should be announced over the next few months.

Intel will be competing with a resurgent AMD, which has just launched its Ryzen Mobile 4000 series for the same market segments. The company points out that games are still lightly threaded and benefit more from higher clock speeds than more cores. Performance is claimed to be up to 54 percent better than an equivalent three-year-old laptop in specific games at high settings.

Intel is focusing on performance as well as design, and says it has worked with multiple laptop manufacturers to refine their products in terms of performance, battery life, and usability. With this generation, we can expect to see more compact 17-inch gaming models with narrow screen borders, more dual-screen models, and also more designs aimed specifically at creators. 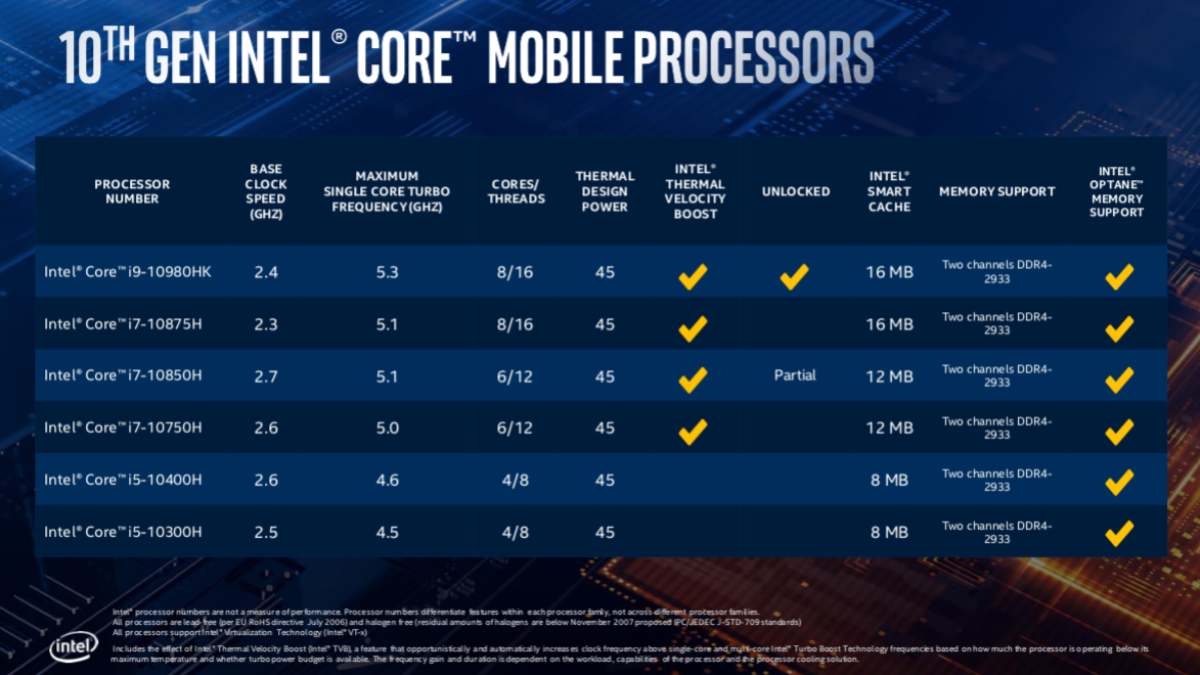 The flagship octa-core Core i9-10980HK model features a 16MB cache and is the only fully unlocked and overclockable unit in the new series. There’s also an 8-core Core i7-10875H model which Intel says is targeted specifically at the creator laptop market to deliver single- as well as multi-threaded performance for creative professionals who like to play games outside of work. The other two Core i7 models, the Core i7-10850H and Core i7-10750H, both features six cores and 12 threads, with 12MB caches. The Core i5-10400H and Core i5-10300H are both quad-core, 8-thread parts with 8MB caches.

All six models have 45W TDP ratings which laptop manufacturers have some flexibility in adjusting to match their design requirements. The new CPUs all support up to 128GB of DDR4-2933 RAM in two channels. Intel is also touting support for 40 PCIe 3.0 lanes at the platform level with 16 lanes arising directly from the CPU which can be used for high-speed connections to a discrete GPU, NVMe SSDs, or IO controllers such as Thunderbolt 3 or Gigabit Ethernet.

The Comet Lake CPU architecture is the latest of several refreshes of Intel’s Skylake 6th Gen parts, necessitated by the company’s continued struggles to produce 10nm CPUs in large quantities. As such, these new CPUs lack some of the features of 10th Gen ‘Ice Lake’ parts, such as native support for AI acceleration. The integrated Gen9 GPU is also unchanged compared to the current 9th Gen ‘Coffee Lake’ models, since Intel says it expects manufacturers to rely on discrete GPU options.

Interestingly, Intel has also said that gaming laptops based on 9th Gen CPUs will continue to be available for some time in more affordable models to serve the more price-sensitive segment of the gaming market.

Don't miss a deal at H&R Block
Best offers at Microsoft Store
Discounts, Sales and Deals at Intuit Small Business
Save your money with Udemy
Online-Shopping with Bodybuilding
Best products at Marks and Spencer
Latest Posts