HP’s Spectre Folio is a leather-bound laptop, but will it really reinvent the PC?

The HP Spectre Folio is the Californian manufacturer’s newest premium laptop for 2018. First revealed, rather unexpectedly, at HP’s own “PC Reinvented” event in New York on 1 October, this is a special convertible 2-in-1 touchscreen laptop with a chassis that’s made from a fusion of aluminium and leather. 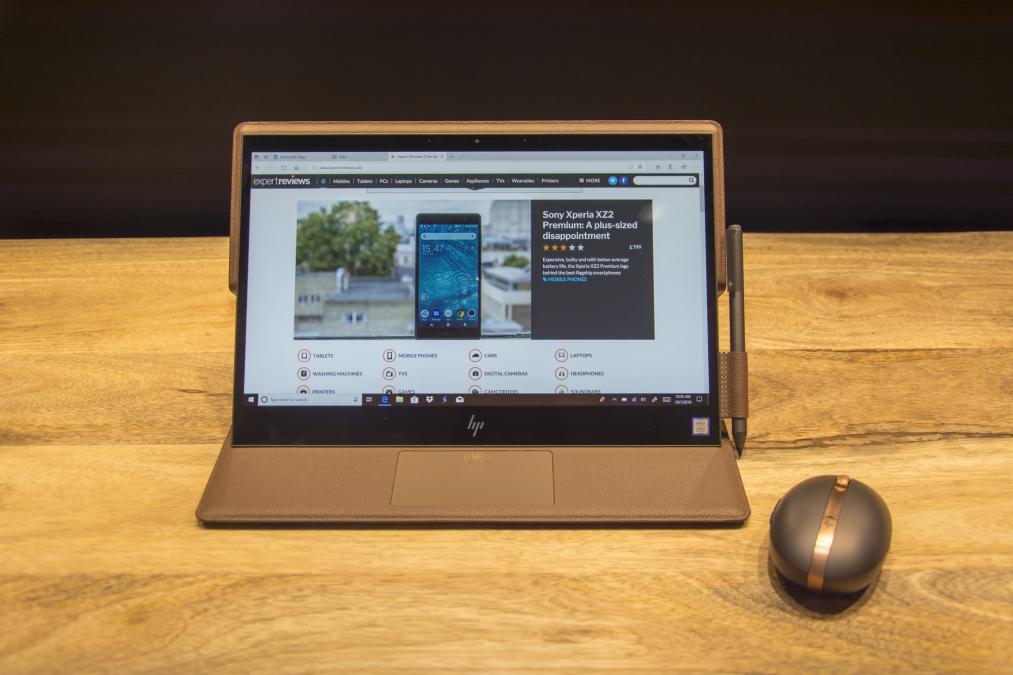 “Vintage meets technology”, that’s the motto HP is using to describe its new leather-coated convertible, while also calling its new laptop “beyond description”. For the purposes of this hands-on review, though, I will do my best.

The design of the Spectre Folio is certainly an unusual one; instead of a laptop with an outer leather case, the leather is actually fused to the metal chassis and as a result, cannot be removed. This is what HP calls a “marriage of metal and leather”; the internal components have been bonded to the cow’s hide, which is intended to make the laptop more flexible by design. Unfortunately, for vegetarians and vegans, there is no faux-leather option available.

For those put off by the, shall we say, mud brown coiour shown in my pictures (HP calls it cognac), a prettier burgundy variant will be available later in the year.

On that note, I heard an interesting conversation between an American tech journalist and a senior HP employee while I was experimenting with the Folio. The journalist suggested that HP should have produced more appealing colours for its new line of leather-bound laptops, “like a dark blue”, to which the HP representative replied, “I’ve never met any cows of that particular hue”. So that’s why there’s no blue.

As with most convertible laptops, the Spectre Folio can be folded into three different viewing modes. The bog-standard clamshell laptop mode doesn’t require a lot of explaining, although I was surprised by its lack of flexibility during my brief time with the device.

Looking like a large leather wallet, the screen connects magnetically to the keyboard – just like Microsoft’s Surface Book 2 – but can be detached and folded into different positions. During my demo, the screen was folded flat for use as a tablet and was also brought forward, resting in front of the keyboard but behind the touchpad, transforming the Spectre Folio into a media-viewing device. 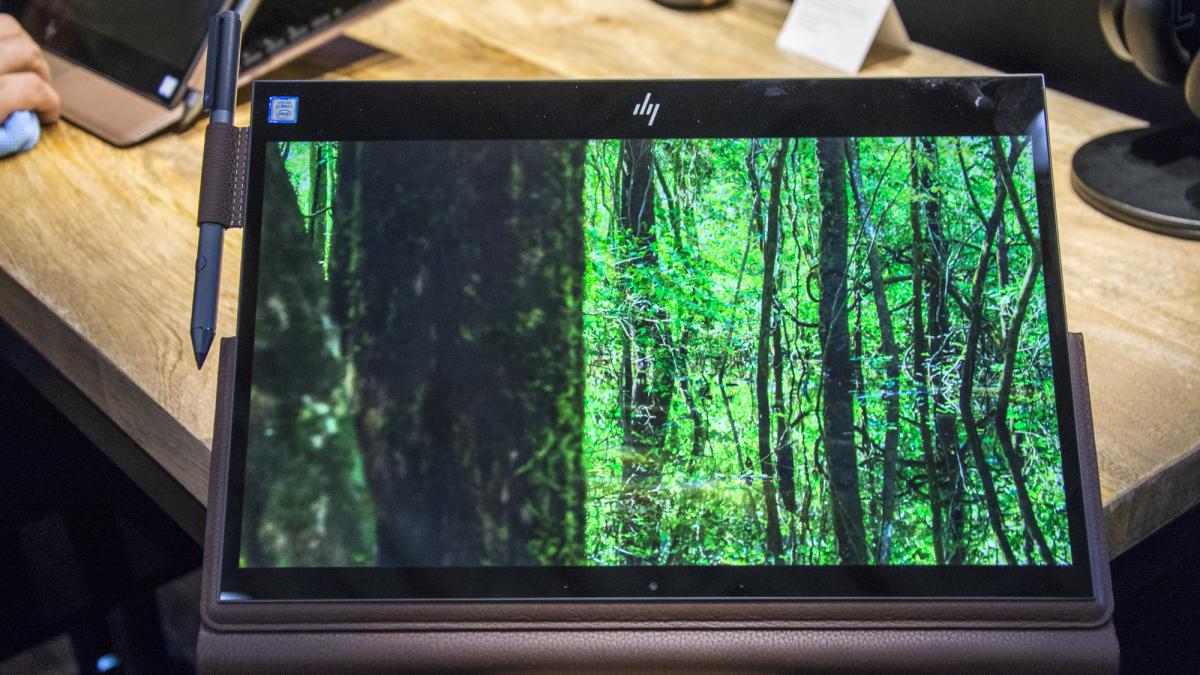 Coated in a layer of Gorilla Glass 4 for added protection from drops and scrapes, the screen also doesn’t pick up greasy fingerprints quite as easily as the rest of its hybrid alternatives. HP’s bundled Digital Pen stylus is just as functional, and you can use the top of the pen to erase portions of your digital drawing, just like a real rubber-topped pencil. 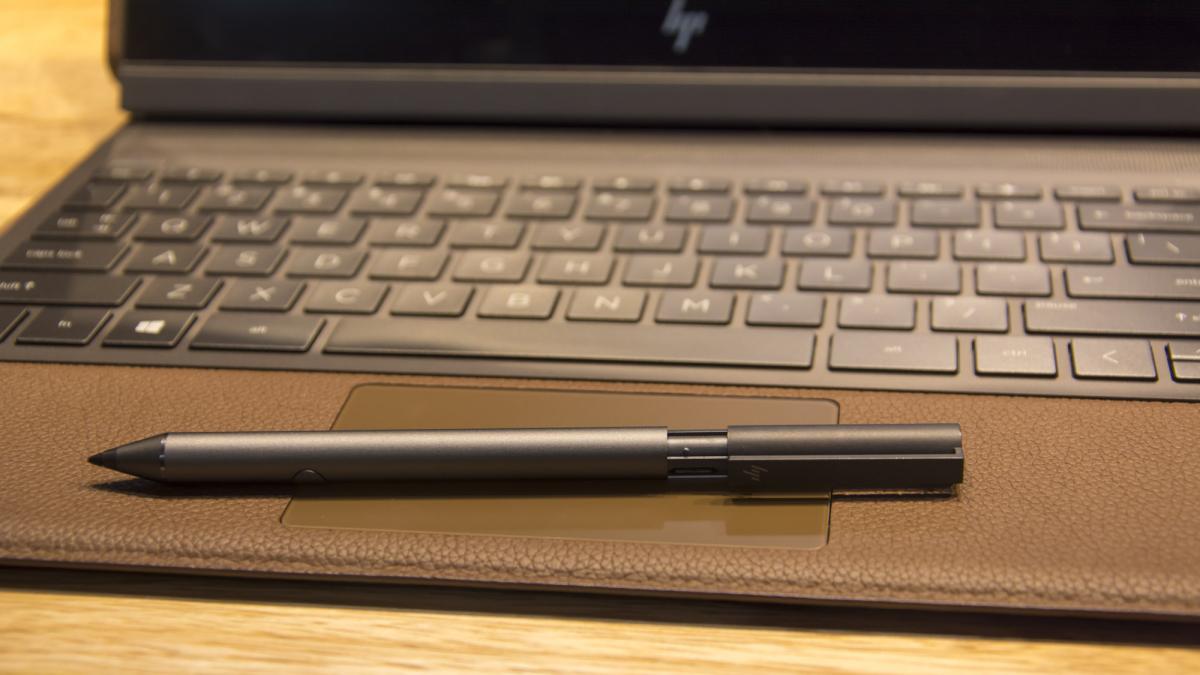 The Spectre Folio comes equipped with four Bang & Olufsen-branded speakers. Sadly, however, I wasn’t able to fully test the laptop’s audio capabilities on the noisy show floor, but I will be able to give my opinion on the sound quality as soon as I receive a unit for review.

What about power? Well, the HP Spectre Folio will be available in two configurations; one with an eighth-generation Intel Core i5 processor and another, slightly-beefier model powered by an Intel Core i7 chipset. Both will include 8GB of RAM for multitasking, 256GB of speedy PCIe SSD storage and integrated Intel UHD 615 graphics.

While I can’t fully comment on the performance of the laptop until I run it through our in-house benchmarking gauntlet, I can say that the laptop felt swift in operation during my brief time spent with the device. 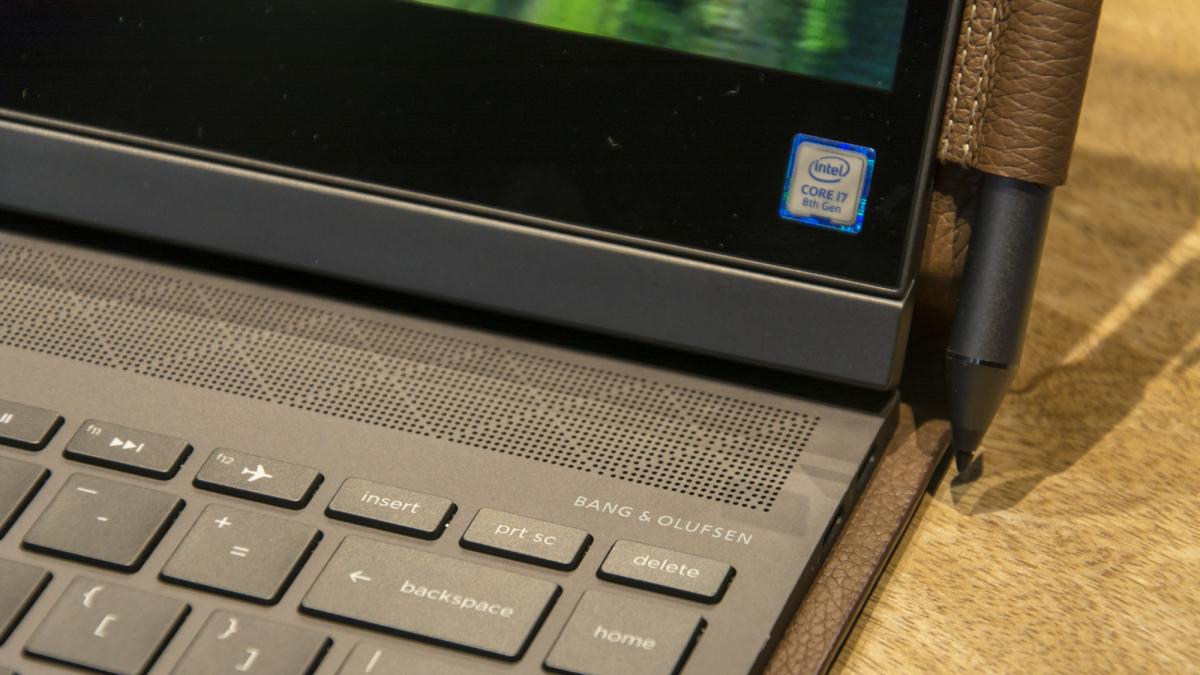 I am, however, a little cautious about the potential for the Spectre Folio to overheat. The majority of its surface is coated in leather, and HP has decided not to equip the laptop with a thermal outtake fan. There are also no gaps or slits in the Folio’s leather casing for the machine’s heat to escape. Instead, HP includes a metal ‘thermal transfer’ bar on the rear edge of the laptop but, again, this is coated in leather.

It is, however, certainly portable enough to carry around with you all day, weighing in at only 1.5Kg. All day is also how much time you can expect to use the Spectre Folio on a single charge, with a reported battery life of between 18 or 19 hours of moderate use. Considering HP’s Spectre 13 was far from a battery champ compared to other devices in the £1,500 range, it’ll be interesting to see if the Spectre Folio can do any better. 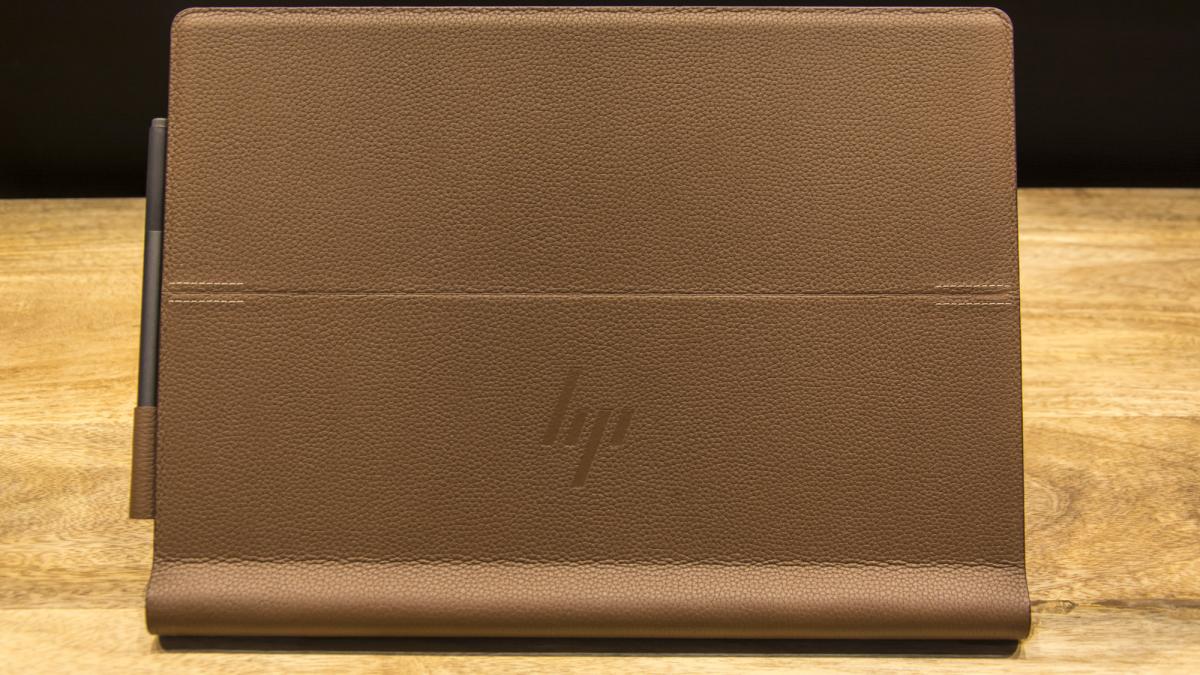 While it’s too early to say how this laptop will fare in terms of performance, the Spectre Folio’s one-of-a-kind premium vintage design will undoubtedly be coveted by pundits who value luxury in their laptops.

Because of the Spectre Folio’s multi-purpose functions, I can see it becoming just the ticket for professionals who want a do-it-all laptop for both work and personal use, while also drawing admiring glances from fellow commuters on the train ride into work. The 4K model, available in December this year, will also be one to keep an eye out for.

With the Full HD model storming UK beaches in November, we don’t know how much the Spectre Folio will cost when it does arrive. Our fellow tech-loving friends on the other side of the Atlantic, however, can preorder the Spectre Folio right now with configurations starting at $1,299.