There’s something both absurd and absurdly wonderful about the HP Elite Dragonfly. This is a convertible laptop that weighs less than 1kg, one that’s tuned for businesses rather than consumers, and it looks and feels great.

It has quality in all the right places, with one of the best combinations of keyboard and screen I’ve ever used. And it’s fast enough for almost everyone’s needs. Still, though, it’s impossible not to ask: is it worth the rather hefty £1,775 asking price for the Core i7 review model sent in for me to test?

HP Elite Dragonfly review: What are the alternatives?

The first difficulty is finding a comparable machine. The Dell XPS 13 2-in-1 doesn’t quite make the cut as it weighs 1.33kg. The Dragonfly’s closest Lenovo rivals are the ThinkPad X1 Yoga and Lenovo Yoga C940, but they include a 14in screen and weighs substantially more.

Dynabook (formerly Toshiba Europe) only sells clamshells or a detachable. In fact, the closest rival I can think of is HP’s own Spectre x360 13.

Even then, the Dragonfly is a very different beast. Not only is it ridiculously light, but it comes with a stack of business credentials that the Spectre can’t match. In particular, the promise of smarter BIOS protection and easier fleet management.

HP also offers several environmental reasons for businesses to choose the Dragonfly. First is its emphasis on using “ocean-bound plastics”, with the promise that at least half the plastic in its speaker enclosure is made from 50% recycled plastic and 5% is made from plastic reclaimed from bottles collected in Haiti that would otherwise have gone into the ocean. While that’s hardly going to change the world, let’s be generous and call it a good start.

The Dragonfly itself is designed to be fully recyclable at the end of its life, which is why HP uses magnesium alloy for the chassis rather than carbon fibre or resin. HP emphasises that these laptops are all serviceable too (as are all of its EliteBooks), with five screws keeping the base in place.

That gives you relatively quick access to the SSD and battery, and the motherboard is fully removable. Note, though, this is all designed for an HP-endorsed service engineer, not for end-users. 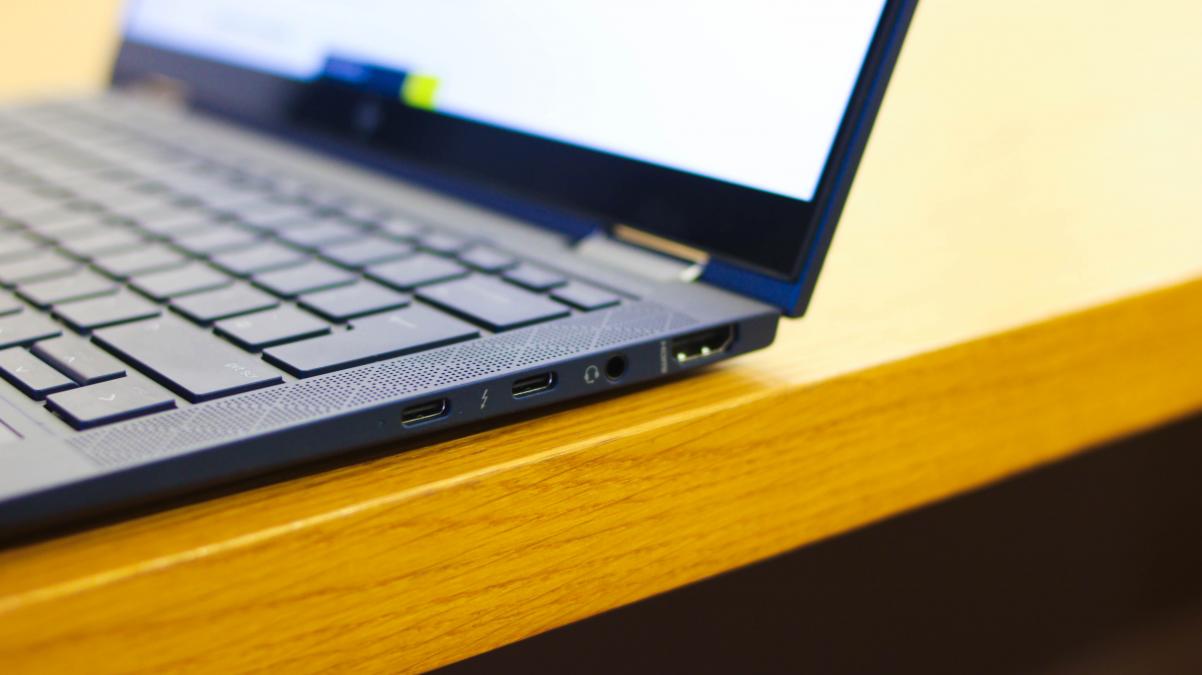 You can buy the Elite Dragonfly with two sizes of battery: two-cell or four-cell. The four-cell battery boosts promised life of 24.5 hours at the expense of a 1.1kg weight, while the two-cell promises up to 17 hours with an official weight of 990g. I weighed the Dragonfly with my calibrated scales and they declared it was 19g heavier at 1.009kg, but that’s close enough.

I treat manufacturers’ claims about battery life with more cynicism, and the gap between claim and real life is just as big for the Dragonfly. In the supplied configuration, it kept going for 8hrs 16mins in our standard video-rundown test, which compares to an official “up to” figure of 17 hours from HP. Could you eke this out by dropping the brightness down and doing less intensive tasks? Yes, absolutely. Will you ever reach 17 hours in the wild? That, I doubt.

Still, considering how light this laptop is, I’m happy with eight-hours. Of course, more would be welcome but the supplied 65W USB-C charger can take the laptop from zero to 50% in 30 minutes and, if you ignore the UK power lead, it’s slim and weighs 186g. With the lead, it’s 304g.

Both of this laptop’s USB-C Thunderbolt 3 ports sit on the right-hand side, along with a 3.5mm jack and – impressively considering the slim chassis – a full-size HDMI output. On the left, you’ll find a USB 3 port, power button and a blanking plate for a SIM (LTE support is optional). 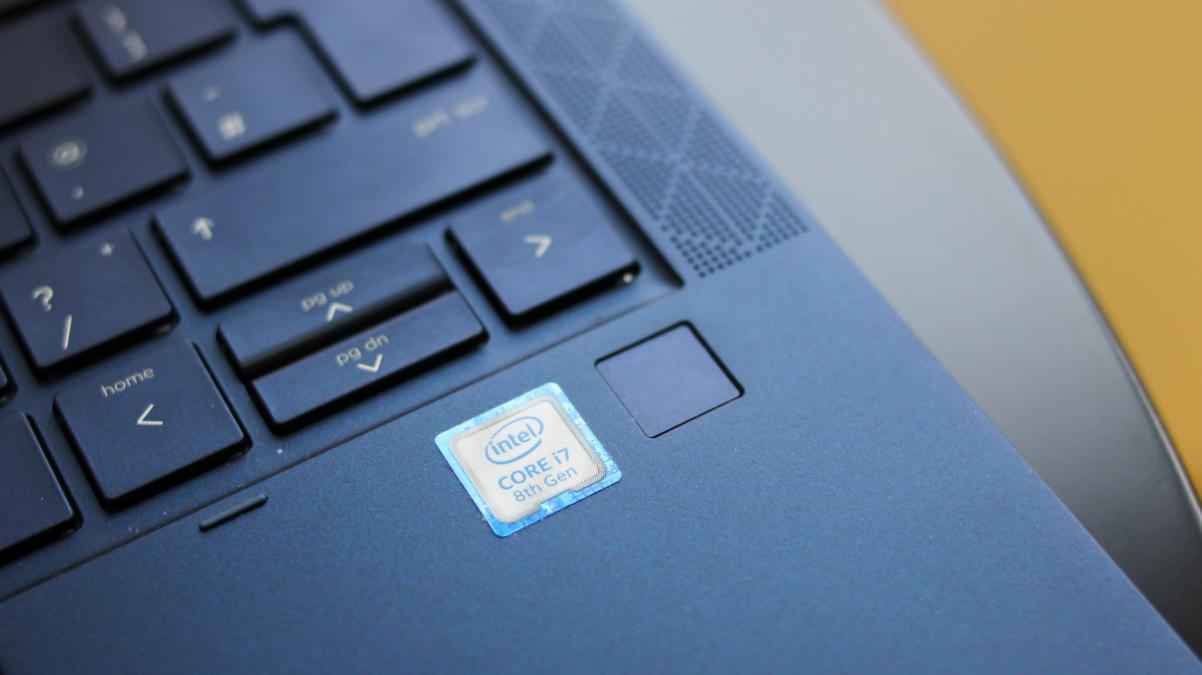 HP opts for a U-series Core i7 chip in the Dragonfly, which is important to emphasise as that means it’s fast enough to be your main computer. If the company had chosen a Y-series Core processor it would have been around half as fast.

In my test machine, HP gave the Core i7 every chance to shine by supplementing it with 16GB of RAM and a 512GB PCIe NVMe SSD. While this proved to be a relatively slow NVMe SSD, with sustained transfer rates of 311MB/sec for writing and 1,054MB/sec for reading (tested with AS SSD), in real-life use it’s bolstered by 32GB of Intel Optane memory, which helps add extra zip. 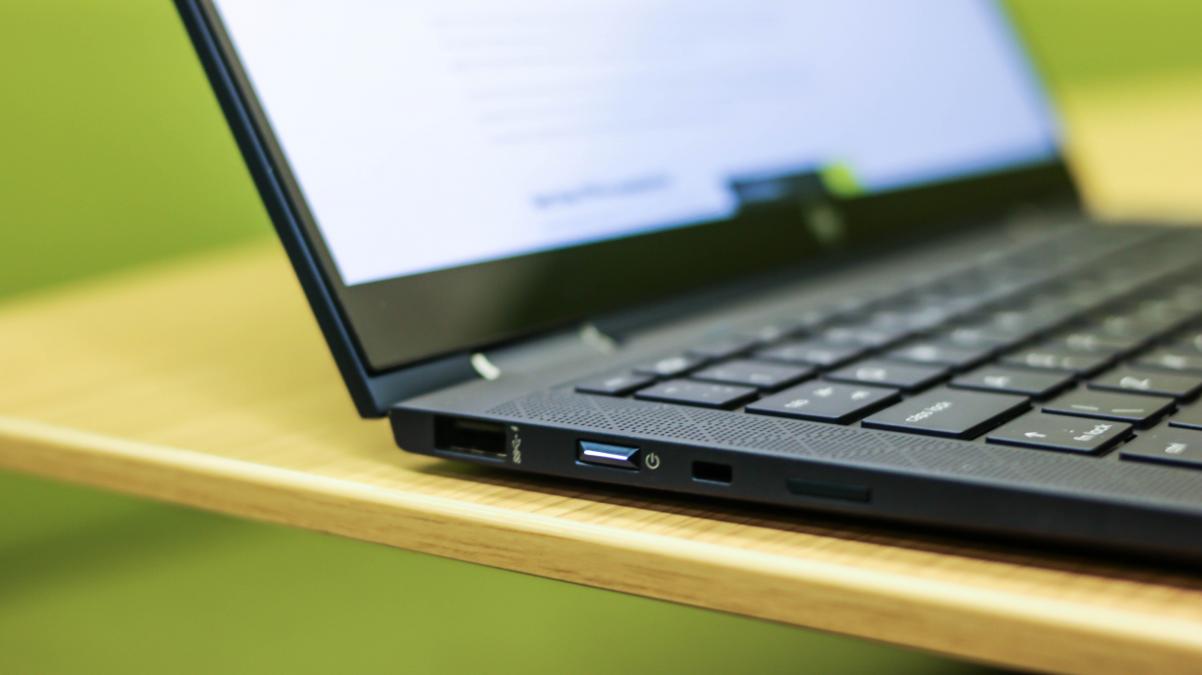 An overall score of 86 in our in-house benchmarks is a respectable return for this configuration, but it would have been even better if HP had included a tenth-generation Core processor rather than the eighth-generation Core i7-8565U. HP assures me that a refresh will come in the summer.

Another thing that will come with this second wind of Elite Dragonfly laptops is the integration of Tile technology. That means that if you have your bag stolen with expensive technology inside, then it can be automatically tracked without the Dragonfly being switched on or connected to a network.

Graphics performance will also receive a boost, with Intel’s UHD 620 accelerator now looking tired. It helped push the Dragonfly to 29.9fps in the GFXBench Car Chase test (offscreen at 1080p) but you can expect double that with a tenth-generation Core i7 inside.

Thanks to an excellent combination of screen and speakers, it’s a far more pleasant experience to pass the time watching a film. I tested the Full HD screen and it performed well. HP claims a peak brightness of 400cd/m2; our colorimeter measured a peak of 417cd/m2. Either way, it’s bright enough for almost anywhere, while a contrast ratio of 1,755:1 means you won’t lose detail in shadows.

Its colour reproduction and accuracy are even better, covering 98.8% of the sRGB gamut. Coupled with volume of 101.5% and an average Delta E of 0.26, what you see will appear as its creators intended. Not that this laptop is flexible enough to cover the Adobe RGB gamut – ruling it out for serious design work – as it only covers 70% of that space. 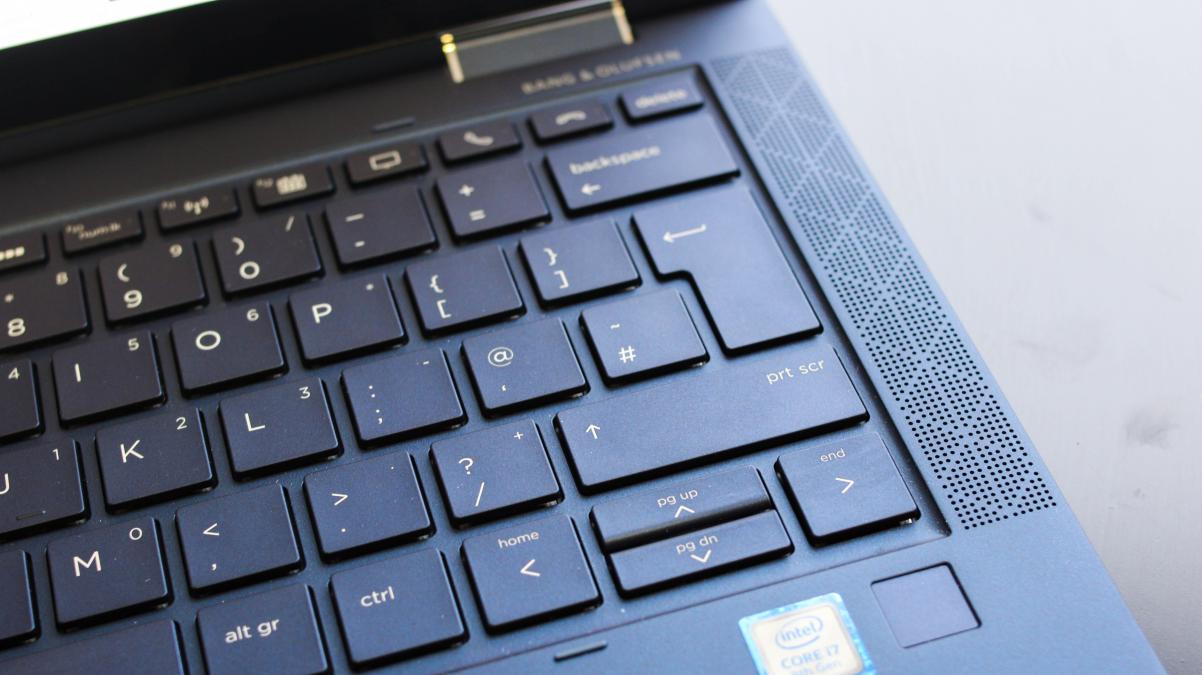 Considering the design constraints, HP has also done an excellent job with the speakers. They’re good enough that you can enjoy listening to music on them, which isn’t always the case with ultraportables. They miss out on bass, but lower mids and vocals come out particularly strongly.

That’s good news for videoconferencing and HP also deserves credit for the acoustic cleverness that means it can detect and reduce background noise during calls. You can also use the supplied Bang & Olufsen audio control software to switch into “conference mode”, where it will pick up surrounding voices. This added echo in my tests but it works.

I’m much less impressed by the appalling Full HD camera that HP fits. Admittedly, it’s facing yet more space constraints as it squeezes it into the narrow bezel at the top and it’s nice that there’s a physical screen you can slide across for privacy.

However, that’s no excuse for the fuzzy images it produces; you can get away with this on a low-quality conference call, perhaps, but if you want to make a good impression then you’ll need a dedicated webcam. Not great given how much we’re coming to rely on video calling these days. 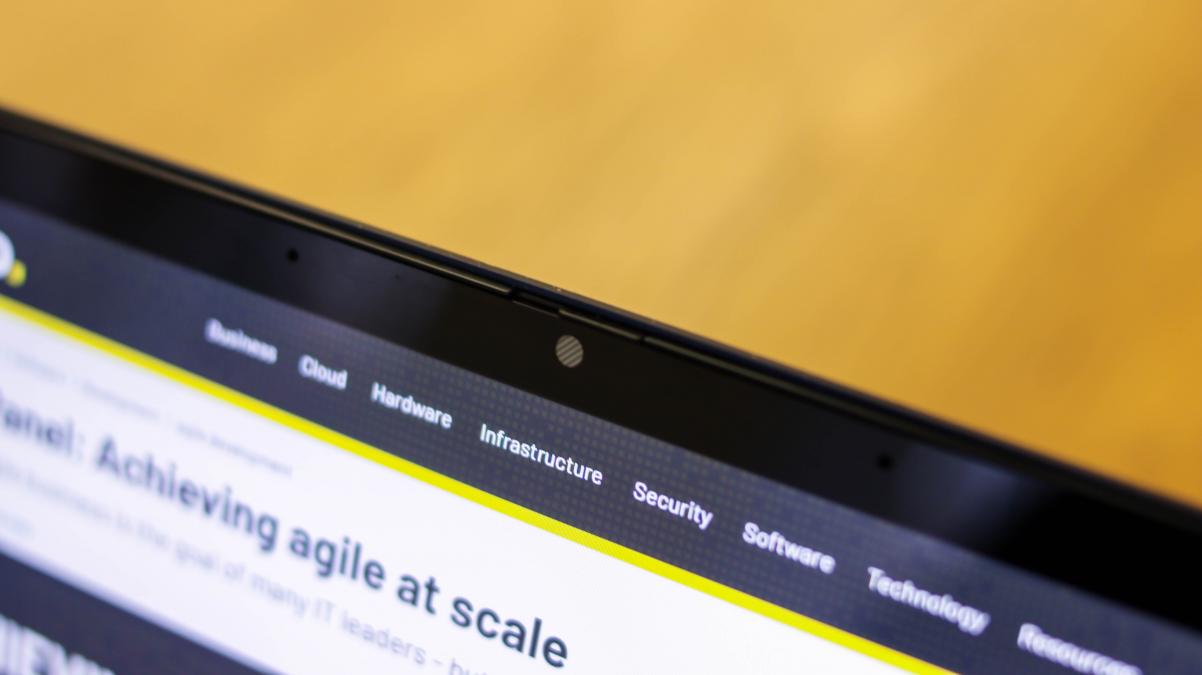 If people meet you in person, however, and see you using a Dragonfly, you’ll make a fine impression. It only comes in one colour – “Dragonfly blue” – but it’s striking. It manages to pull off that rare combination of professional and stylish.

It doesn’t pick up fingerprints, thanks to an effective oleophobic coating and I loved the feel of this laptop. It helps that it’s so sleek and light, but some lightweight laptops feel poorly built. This one feels rock-solid, without any obvious weakness. That even extends to the keyboard base; it doesn’t have the deep key travel of our ThinkPad friends but there’s enough to make typing a thoroughly pleasant experience.

HP extends the wide touchpad to within 2mm of the bottom of the wristrest, and the palm-rejection technology works well. Very rarely did I encounter false pickups. It’s a lovely glass-coated touchpad, too, which only adds to the pleasure of using the laptop. 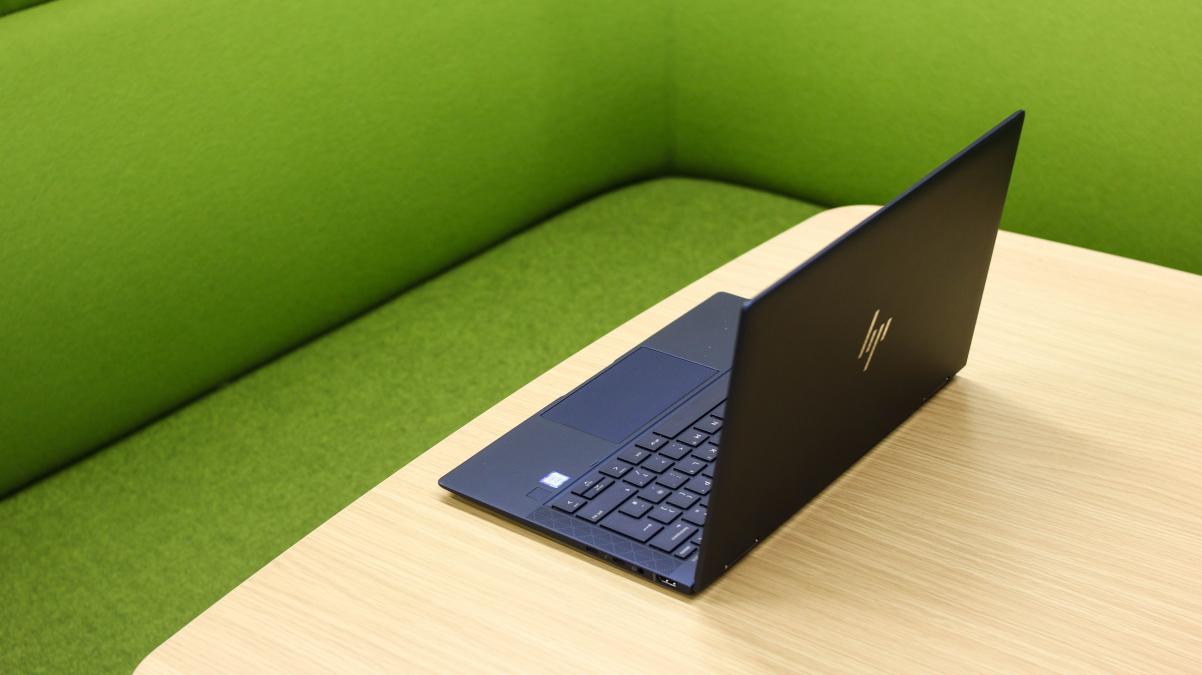 HP has created a stunning laptop in the Elite Dragonfly, one that may yet become my favourite laptop of the year. At the moment, however, I can’t quite bring myself to recommend it.

That’s because I know the tenth-generation Core versions will leap onto shelves this summer and, with them, bring improved battery life, faster performance, better graphics, and Tile integration. While Intel is currently staying quiet on what the vPro improvements will be, I expect security improvements too.

When all those enhancements happen, I suspect that the answer to my original question – is the Dragonfly worth the cash? – will be an emphatic yes.

Don't miss a deal at TalkTalk Phone and Broadband
Best offers at Vodafone UK
Discounts, Sales and Deals at Carphone Warehouse
Save your money with H&R Block
Online-Shopping with Marks and Spencer
Best products at Argos
Latest Posts