Honor’s new entry into its ‘X’ range of phones has a large, notch-free screen for not much money

If ever there was a phone designed to catch the eye, it’s the Honor 9X. On the surface, my glittering blue review model appeared to tick all the boxes, with a great-looking screen that with no notch in sight, a 3.5mm headphone jack and somewhere to stow a memory card to expand its already reasonable 128GB of memory. For less than £250, I was immediately falling for its charms.

Honor 9X review: What you need to know

So, where’s the catch? Well, looking beyond the superficial exterior, there are still plenty of things to like. Honor supplies a massive 4,000mAh battery and the 48-megapixel camera should be able to capture detail-rich images. The 16-megapixel selfie camera also pops out of the top of the handset, with a friendly mechanical whir that made me think of R2-D2. 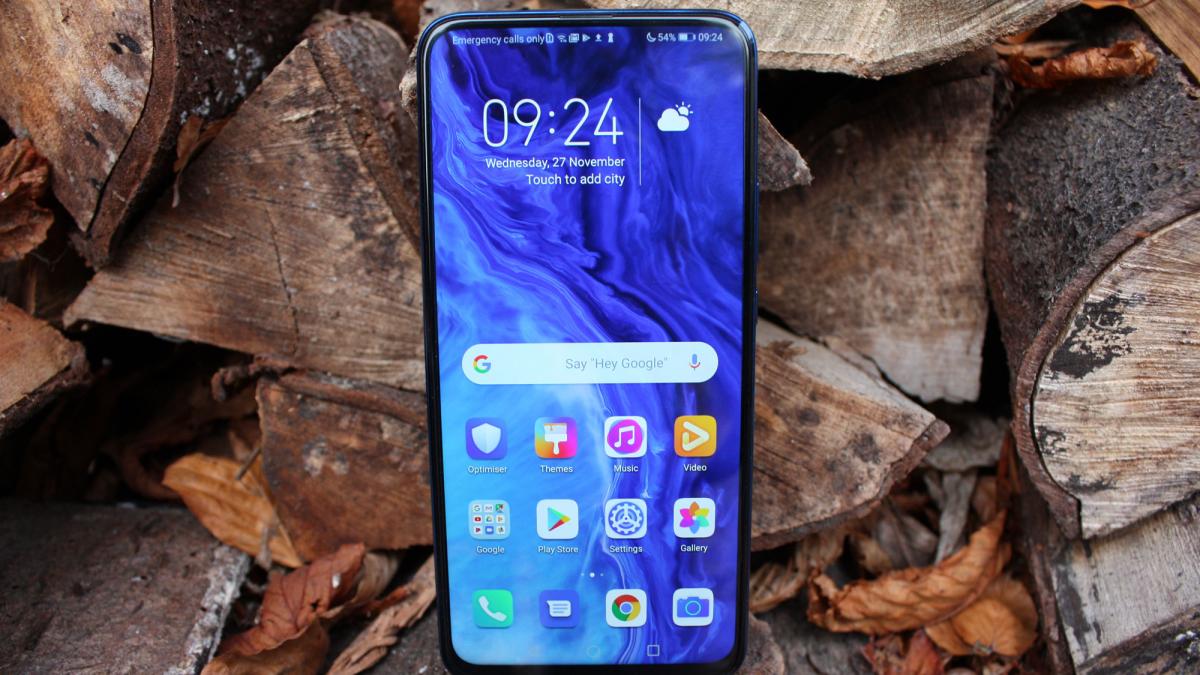 However, for the price, there surely has to be a compromise somewhere. And, following my testing, I finally found it in the Kirin 710 processor – which is the same CPU that came in last year’s Honor 8X.

You’ll find a few phones on the market that hit this £250 sweet spot, and some of them come highly recommended. The Motorola Moto G8 Plus, for example, has a great battery life that could easily rival the Honor 9X’s stamina. Alternatively, there’s the Nokia 7.2, which has one of the best screens I’ve seen at this price. If you’re a gamer, you might also want to consider the graphics performance of the Motorola One Action.

As I’ve already mentioned, this phone is a looker. It’s tall, slim and elegant, with softly curved edges that help it both sit comfortably in the hand and give it the illusion of costing much more than how little it actually costs. 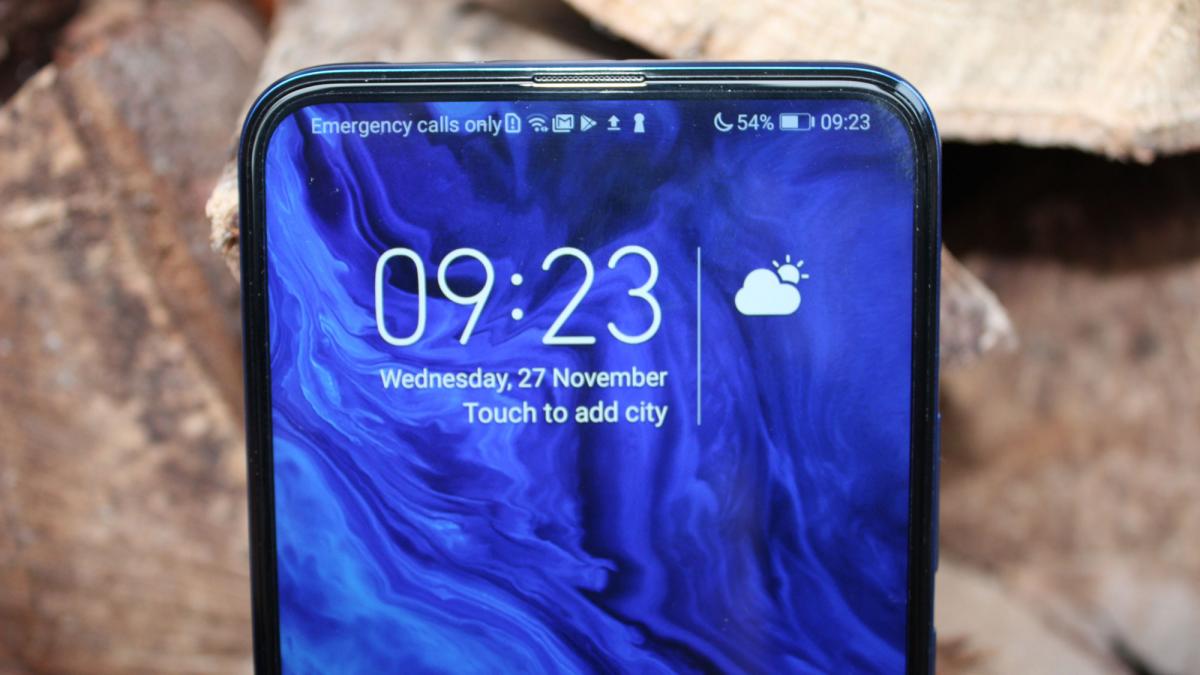 It charges via a USB Type-C port at the bottom, which sits alongside the 3.5mm headphone jack. A volume rocker and power button are situated on the right side, and on the top of the phone there are compartments, sealed flush with the side panels, which hide the selfie camera and the SIM/microSD slot. What it doesn’t have – which is a bit disappointing if you’re a frequent traveller on the London Underground – is NFC, so you can’t use it for contactless payments.

The display on the 9X is a generous 6.59in FHD+ (2,340 x 1,080) LTPS panel, with a total pixel density of 391ppi. The rounded corners don’t extend to the very edges of the phone, with particularly sizeable bezels on the bottom edge – measuring 8mm in width but shrinking to just under 4mm on the other edges. According to Honor, however, it still manages to cover 91% of the front surface.

In testing the screen produced 90.2% of the sRGB colour gamut, which is a typical score for a phone of this price. I recorded a maximum brightness of 428cd/m2, which is bright enough to see on a sunny day but isn’t as bright as screens on pricier models. The measured contrast ratio of 1,269:1 also helps to mitigate jagged-looking edges around text and images.

The 2.2GHz Kirin 710 processor has been a stalwart of Honor and Huawei phones for a while now, and this cost-saving tactic is becoming increasingly dated as both manufacturers continue to use this low-powered chipset.

This is especially obvious if you look at the results of our performance tests. In the Geekbench 4 benchmark, for example, the 9X produced similar results to last year’s 8X, and in some instances even managed to come out slightly worse. It slightly edged ahead of the Moto G8 Plus in the single-core test, but still fell behind in multi-core. All of these results are pretty much a dead heat, of course, but I’d much rather be writing about a significant step forward in performance, rather than repeating myself yet again.

Honor has clearly managed to squeeze a little more out of the graphics hardware, however, with the 9X slightly improving on the 8X’s performance in the suite of GFXBench tests. Here, the Manhattan 3.0 benchmark produced a 19fps average onscreen and 21fps offscreen, which is better than both the 8X and Moto G8 Plus. Like CPU performance, it’s still a way behind the Nokia 7.2, though.

Disappointingly, battery life has also decreased between generations. In the battery rundown test, where I loop a 20-hour video with the screen set to 170cd/m2 brightness and data connections turned off, the 9X lasted 12hrs 41mins going from full charge to zero. That’s 15 minutes less than last year, so it’s not drastically different, but the Moto G8 Plus still has them both beat.

The main camera on the Honor 9X is a 48-megapixel (f/1.8) unit with a 1/2in sensor. It’s backed-up with a 2-megapixel depth-assist camera to help improve portrait shots and an 8-megapixel wide-angle lens with a 120-degree field of view. All three cameras sit vertically aligned in a slightly raised section on the upper-left area of the back of the phone, which doesn’t protrude far enough to unbalance your typing and swipes if you’re resting it flat on a table.

The selfie camera is discreetly tucked in a retractable arm, which pops out of the top of the phone when you switch between cameras in the app. It stays out until you return to the rear camera or leave the camera app, at which point it retracts neatly away. 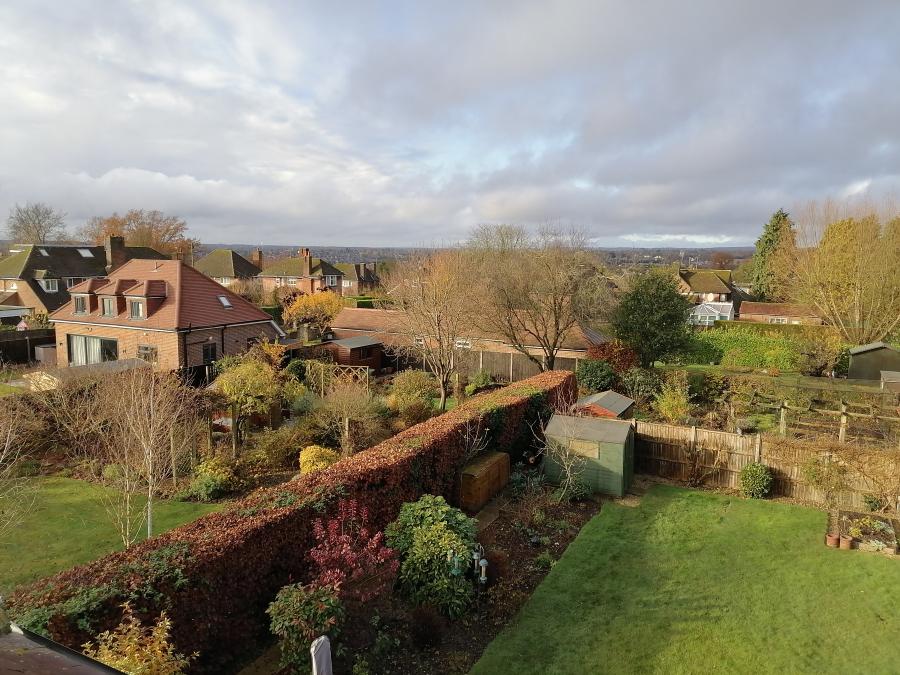 Taking pictures on a bright, overcast day left the colours looking a bit flat and washed out. The detail is surprisingly sharp, however – I zoomed in and compared the detail taken on a bright day with Huawei’s more expensive Nova 5T and the results were similar. I preferred the colour on the images taken with the wide-angle lens, but there’s much less detail on these when you zoom in, as you’d expect from an 8-megapixel sensor.

The same was true when taking photos indoors in low light. There’s nothing missing from the detail of the 9X compared to the camera on the Nova 5T but the images lack vibrant, punchy-looking colours.

The Honor 9X is a phone that’s filled with positives. Most impressively, It looks like something far more expensive than what it actually costs, and manages to hold this veneer up to close scrutiny.

The only fly in its ointment is that, underneath its slick exterior, it’s hiding the same processor that appeared in last year’s model. Sure, there are a lot of other improvements made along the way, but without even an incremental increase in the core brain of the phone, it feels a tad superficial.

If you’re buying a phone built on last year’s technology, even at this price, it’s likely to need replacing all the sooner. As it stands, there are simply too many benefits to looking elsewhere.