Hitman games often live and die on their replayability, but IO Interactive’s latest entry in the series, simply entitled Hitman this time round, absolutely depends on it. This is partly because IO’s chosen to take an episodic route for Agent 47’s next adventure, providing players with just three core missions in the first ‘Intro’ episode instead of letting them loose with the entire game upfront.

After that, each new episode simply adds one new main location. In the second episode, Agent 47 heads to the sunny, seaside village of Sapienza on the Amalfi coast, but in the recently released third episode, you’ll be taking to the hot, bustling streets of Marrakesh, pushing your way through crowded market stalls and infiltrating the comparatively cool Swedish consulate to find your targets. In a way, though, this episodic route plays to Hitman’s strengths, as each miniature sandbox offers plenty of scope to dispatch your marks in almost any way imaginable.

Open up the challenge menu, for instance, and you’ll quickly see a list as long as your arm detailing different assassination methods, intel discoveries and feats you can achieve in each mission. It might only take around two to three hours to complete an episode once, but with so much variety on offer here, you know right away there’s more than enough to keep you occupied and entertained until the next big mission location arrives. Each episode also comes with its own set of Escalation missions, which see you take down a different target in increasingly difficult circumstances, and we’ve also seen our first crop of Elusive Targets start to appear as well. These only appear in each game world for a specified amount of time – a weekend, for example – and if you fail or die before you find the target in question, that’s it, game over. No re-tries allowed. 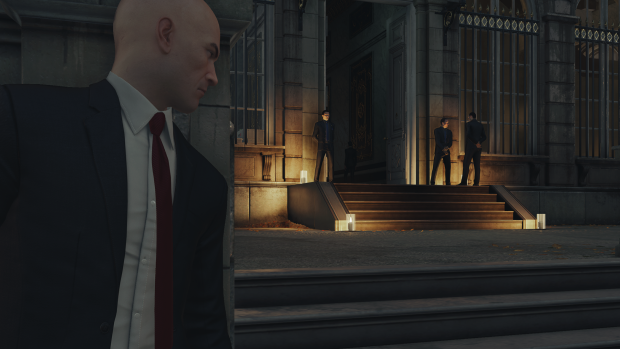 It’s not just the amount of variety that makes Hitman special, though. With such huge game worlds to play with, the attention to detail is truly astonishing, and nowhere is this more prevalent than in the third Marrakesh episode. Despite having hundreds of NPCs onscreen at any one time, Hitman’s Glacier engine takes it all in its stride, barely batting a frame as Agent 47 pushes through the food stalls and weaves his way through the protest taking plain in the main square. Elsewhere, lamps, rugs and all manner of goods clutter the streets and sidewalks, adding another layer of dense detail to its overall set design.

It’s a world away from the comparatively sparse fashion halls of the first Paris episode, but fundamentally your goals haven’t changed, as you’ll still need to work hard to get to your chosen targets. For instance, when Agent 47 rocks up in Paris to take out two elite fashion moguls-cum-terrorist leaders at a high society catwalk event, the whole complex is simply brimming with opportunities to help you take them out. Subduing and dressing up as different people once again plays a crucial role in how you move about the place-waiters won’t be allowed upstairs to the secret members-only auction taking place on the second floor, for example-but discovering opportunities and eavesdropping on titbits of conversation now plays an equally important role in tracking down alternative routes to your various targets.Having skulked about a bit through the surrounding gardens, I overheard one such phone call taking place between my mark and one of the fashion icons due to go on the catwalk in just a few minutes time. Making sure there weren’t any guards around, I quickly subdued dear Helmut, dumped his body in the river and then whisked off to get my make-up done so I could walk unhindered around the entire show-after I’d strutted my stuff on the catwalk, of course, and earned a hefty chunk of experience points in the process. 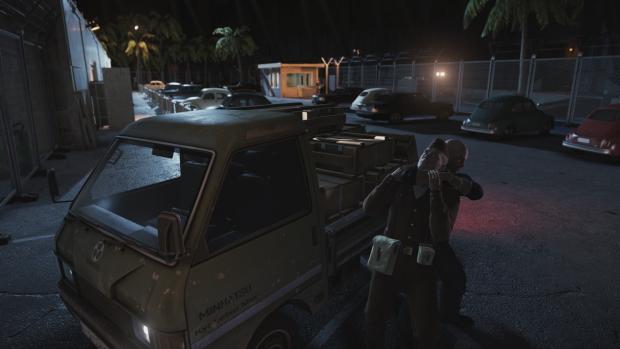 With Helmut’s disguise at my disposal, I could walk straight into my private meeting with my unsuspecting target, and once we’d had a nice chat about who Helmut was supposed to meet with next, I quietly slipped some rat poison I’d found earlier in the kitchen into her drink and stuffed her corpse in the wardrobe before swiftly taking my leave. Had I tried to go up as auction staff, on the other hand, I’d have been patted down by the security guards, which was too risky considering the number of concealed weapons I currently had stuffed up my sleeves.

My second mark was trickier to pin down on his own, as he was constantly being tailed by a wary bodyguard. My Helmut disguise got compromised, so I knocked out a stylist in the make-up room and ended up ‘accidentally’ dropping a chandelier on his head once he came to a brief halt on his relentless march round the manor house. However, I could have easily waited it out in a bush with a sniper rifle (once I’d found one, of course) or used a spare screwdriver to tamper with a lighting wire and electrocute him instead. Alternatively, I could have drawn his attention by setting off his planned fireworks display too early, spiked his favourite cocktail recipe and drowned him in a nearby toilet, or blown up both targets with remote explosives and caused a mass evacuation. 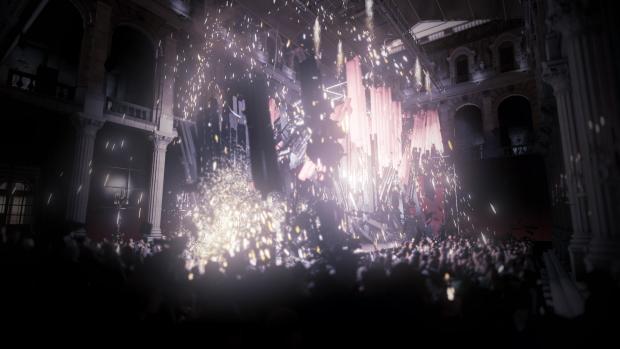 The second Sapienza episode is arguably even better, as strolling round this sun-drenched beach town is virtual tourism at its finest. Admittedly, the bulk of the main mission still involves sneaking round a rather swanky, high-security villa complex, but you’ve also got command of the surrounding streets as well as your mark’s secret underground chemical lab, allowing you to dip into ice cream shops and stroll down the promenade as you suss out your various infiltration options.

Should you disguise yourself as your neurotic target’s psychologist, for instance, and quickly smother him with a pillow while he expounds about his smothering dead mother? Or maybe you could drive him mad out by pretending to be his mother’s ghost? There’s always the traditional ‘expired spaghetti sauce’ in the meatball ragu option, of course, but that wouldn’t be nearly as fun as heading down to the villa’s crypt and jumping out of a coffin boogeyman-style and making the poor dear collapse on the spot from sheer fright, would it?

There’s also his partner in crime to take into account. She’s already suspicious of what this mad scientist has been up to behind her back, but she’s also a bit weak at the knees for her golf instructor, paving the way for yet another set of brilliant undercover operations that let you get up and close and personal with your two hits before pulling the trigger.

The opportunities are endless, and it just goes to show how much more complex and varied Hitman is than other ‘would-be assassin’ games like Ubisoft’s Assassin’s Creed Syndicate. To be fair, Syndicate did start to introduce a similar kind of opportunity-led system in a couple of its main assassinations, but Hitman takes it to a whole other level, as it not only gives you a boat load more tools to play with, but its intelligent AI also really makes you work for each and every challenge trophy. As it turns out, being an assassin probably isn’t my life’s greatest calling, but when the whole experience is complemented by such natural snippets of conversation and authentic character patterns and behaviours, it scratches several of the same itches that Metal Gear Solid V: The Phantom Pain did late last year, albeit without the great, big open world to explore in between missions.

Once you’ve completed a few challenges and raised your mastery level, you can also begin each level from different locations within the same complex and don different costumes to give each new attempt a new twist and flavour. 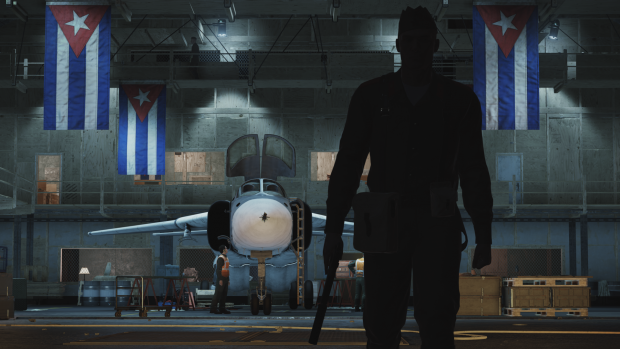 ^ The final training mission has plenty of options available, but the best has to be ‘death by faulty ejector seat’

It’s an incredibly polished game, although the long loading times on the PS4 version I played will more than likely elicit a few groans of frustration when it comes to reloading checkpoints and manual save files, particularly if you end up getting compromised or gunned down in action. Likewise, not everyone will want to mine these levels for every last achievement, which will limit the game’s overall appeal for those looking for something a bit more casual.

Still, when the Intro pack costs just 12 pounds, there’s certainly enough here to at least whet your appetite for what’s to come, although you will have to pay for each additional episode or buy an upgrade pack if you don’t opt for the 45pounds Full Experience version at the beginning. The Full Experience will give you access to a whole year’s worth of content, including Sapienza and Marrakesh, and then Thailand, the US and Japan later in the year, but a proper disc release with every piece of content will arrive in January 2017.

That said, if you’ve grown tired of Assassin’s Creed and want something a bit more challenging, then Hitman should definitely be in your sights as one of your next game purchases. With three equally stonking episodes now under its belt, Hitman has truly flourished into one of this year’s must-have hits, earning itself that extra fifth star that it missed out on at launch. It comes very highly recommended.

Don't miss a deal at Microsoft Store
Best offers at The Home Depot
Discounts, Sales and Deals at Virgin Media
Save your money with Turbo Tax
Online-Shopping with Carphone Warehouse
Best products at Argos
Latest Posts