Having only listened to them for a few hours, the Sony WF-XB700 have so far made a good impression on us. They have a fun, energetic sound quality, feel comfortable during long listening sessions and have an 18-hour combined battery life. We don’t love their radar-disc shape and their lack of noise cancellation, but these could very well be Sony’s second-best true wireless earbuds.

For years, Sony tried to create the perfect true wireless earbuds. It started its efforts with the divisive Sony WF-1000X and followed it up with the sports-focused Sony WF-SP700N. Neither were at the top of their class, and neither held a candle to the Apple AirPods.

But things have been getting better. Last year we got the nearly perfect Sony WF-1000XM3 with active noise cancellation and, just arriving on shelves now, the more affordable Sony WF-XB700 that seems to offer a comfortable fit, punchy, bass-heavy sound and an IPX4 rating with a combined 18 hours of battery life between the buds and the case.

We haven’t spent a ton of time with it yet, but so far Sony’s latest true wireless buds feel like a marked improvement on the original WF-1000X and WF-SP700N, and could very well be our second-favorite Sony true wireless earbuds.

The Sony WF-XB700 is the latest addition to Sony’s Extra Bass series of headphones and earbuds and were released in April 2020. The earbuds were announced alongside the Sony WH-CH710N Noise-Canceling Headphones, and hit shelves around the same time, too.

Compared to other true wireless earbuds, the Sony WF-XB700 is right around the middle of the pack, and is actually a bit cheaper than the $139 (£159, AU$239) Apple AirPods that dominates the form factor in terms of sales. Without spending more time with Sony’s buds it’s hard to compare them, but a $10 savings is a good early advantage in the competition. 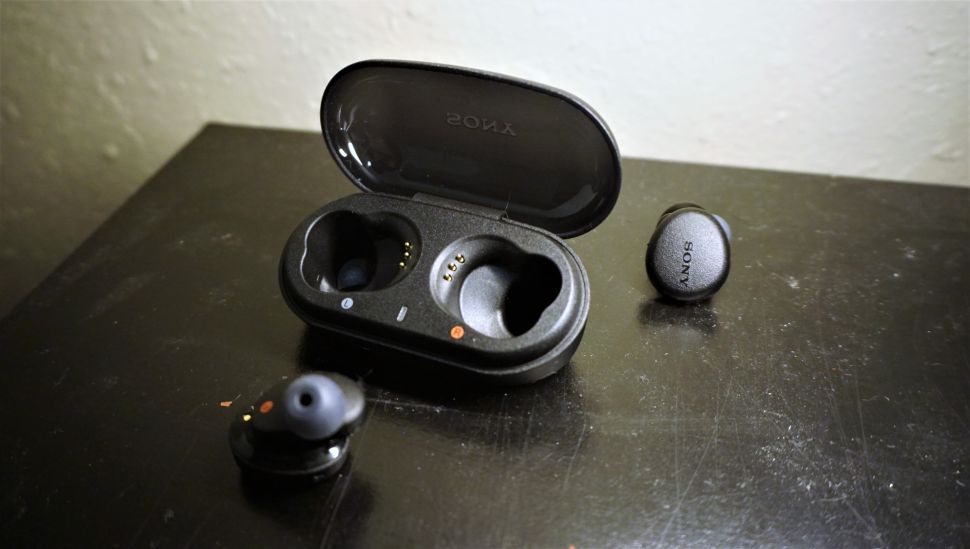 The way Sony crafted these earbuds kinda make them feel a bit more space-agey than other true wireless earbuds it’s produced in the past that have instead tried to be sleek and sporty. That’s because Sony has usually opted for rounded, oblong buds, and while the WF-XB700 have an oblong inner piece that sits in your ear, the outside is an almost satellite-esque circular disc that hosts two buttons.

What exactly these buttons do isn’t all that intuitive at first, but on the left earbud you’ve got volume up/down and on the right you’ve got play/pause and skip. You can also use them to activate your voice assistant and accept calls, but it’s not super clear right out of the box how to do all that.

If you boil them down to their nuts and bolts, there’s three important parts to these earbuds: the tip that fits in the ear canal, the middle section that houses the drivers and sits inside the ear and the outer shell that houses the battery. This three-level design isn’t exactly space-efficient – and is likely to be incredibly polarizing for people who just want slim, sleek buds – but it does have some advantages.

First and foremost of these advantages is that, because of their size, they should actually completely fill both the ear canal and outer ear where they rest. That secure feeling plus their low weight makes them surprisingly comfortable and easy to wear for long periods, and the tight seal helps them sound great. Sony also includes a number of eartips inside the box if the default tips don’t fit properly, which is a nice touch.

The other advantage of their design is that they can fit a slightly larger than average battery inside the buds themselves. According to Sony, that battery life is about nine hours on a single charge, plus an additional nine hours with the charging case, bringing the total to 18 hours. That’s nearly the best on the market. For comparison, the Samsung Galaxy Buds Plus offer 11 hours of playback outside their case while the similarly priced Apple AirPods only offer about five hours of music playback before they need to go back in their case.

Speaking of cases, the plastic case that ships with the Sony WF-XB700 is fairly slim and uses a translucent cover that allows you to see the charging status of the earbuds in the case. Initiating the charging process is as easy as snapping the buds into their mini-pin docks and waiting for the red LED to go on. To recharge both the case and the buds, just plug them into an open USB port on your computer with the provided USB-to-USB C cable. 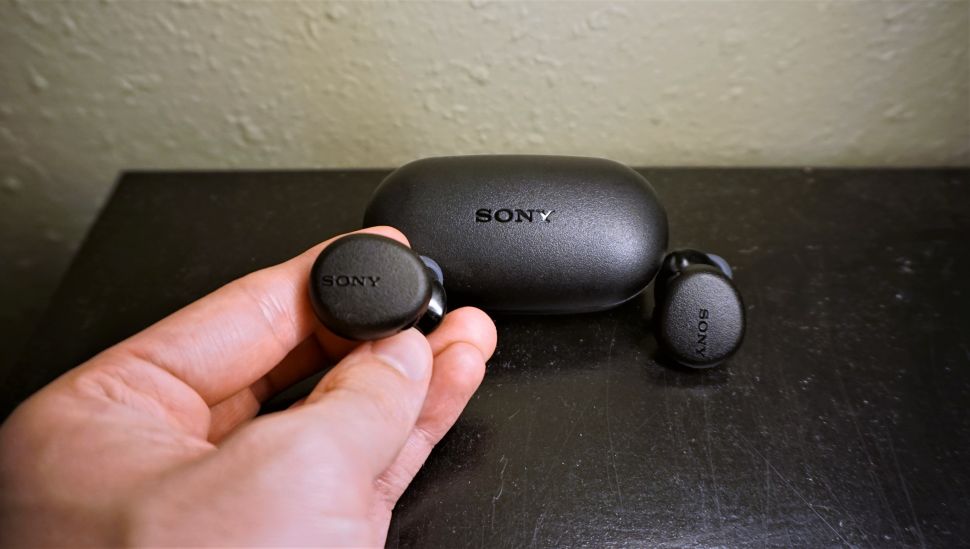 So how do they sound? Well, being part of the Extra Bass series we were worried that they’d sound bloated, muddy and confined. Thankfully, they’re anything but.

First thing you’ll notice when listening to them is the bass – it’s definitely present – but it’s done in a way that feels tight and punchy rather than muddy and bloated. The result is music that’s actually pretty fun to listen to… even if it’s not exactly the sound the artist intended.

The downside is that the midrange does take a hit here: Listening to YouTube videos is noticeably quieter across the board than listening to music, and the less-powerful midrange is definitely to blame there.

That doesn’t mean YouTube or Netflix are impossible to listen to, they’re not, but it would be nice if there was a way to change the EQ based on the type of content currently playing – say, through Sony’s Headphones app.

Of course, Sony seems to want these to be music-focused with them doubling as a good gym companion – that’s why they’re IPX4 sweat- and water-resistant. They also seem to have a relatively stable connection based on our short time with them – walking around our house with our phone in one room, we didn’t experience any hint of dropout – but they’re not noise cancelling, so be prepared to hear most conversations going on nearby.

The good news is that their built-in mics are pretty great. In the course of a few hours we took a few phone calls with the buds and, for the most part, people we spoke with said they sounded fine. That’s a relief as some folks have had problems in the past with other Sony headphones’ built-in mics, but we’ll continue to use them and report back any anomalies.

Last but not least, so far the battery life has held up to the claim of nine hours per charge, thanks in no small part to the earbuds’ ability to go into a low-power mode when removed from the ear. Auto-off is a huge power-saver, so it’s great to see it used here.

While it’s easy to focus on some of the negatives like the polarizing design, lackluster midrange and lack of noise cancellation, these earbuds have a lot going for them. Honestly these are decent Apple AirPods competitors: they’re the right price, have the right sound and even have a better battery life.

We’ll want to continue to listen to them over the coming days but so far the Sony WF-XB700 are in line to be our second-favorite Sony true wireless earbuds.

Previous ArticleIntel Comet Lake purported pricing details spilled, and they may cost about the same as 9th-gen desktop CPUs
Next ArticleRazer's Pikachu wireless earbuds are stored in a Poké Ball
Comments (0)