The Samsung Galaxy Buds Plus are the update the company’s true wireless earbuds desperately needed: they offer better battery life, improved call audio thanks to a third internal microphone, and a new dual-driver design that uses two powerful drivers for better, clearer sound. On top of that, there’s finally support for iOS through the new Samsung Galaxy Buds Plus app.

The downside? The new Samsung Galaxy Buds Plus lack high-end audio codecs and higher IPX4 rating that the Apple AirPods Pro have.

The result are earbuds that are a significant improvement on their predecessors and an overall decent package. They lack some of the niceties of pricier earbuds and are uncomfortable to wear in bed, but are a good option for folks who can’t be bothered to charge their earbuds every day.

Samsung has launched its latest true wireless earbuds, the Samsung Galaxy Buds Plus, at its Unpacked 2020 event in San Francisco, where it announced that they’ll be available to buy online from February 14, and in stores from March 6.

At $149.99 (about £115 / AU$220), they’re a bit more expensive than last year’s Samsung Galaxy Buds, but they’re both a little cheaper than their biggest competitors, the Apple AirPods, and significantly cheaper than the best true wireless earbuds of 2020, the Sony WF-1000XM3.

In comparison to the competition and in their value for the money, the Samsung Galaxy Buds Plus are smack-dab in the middle. 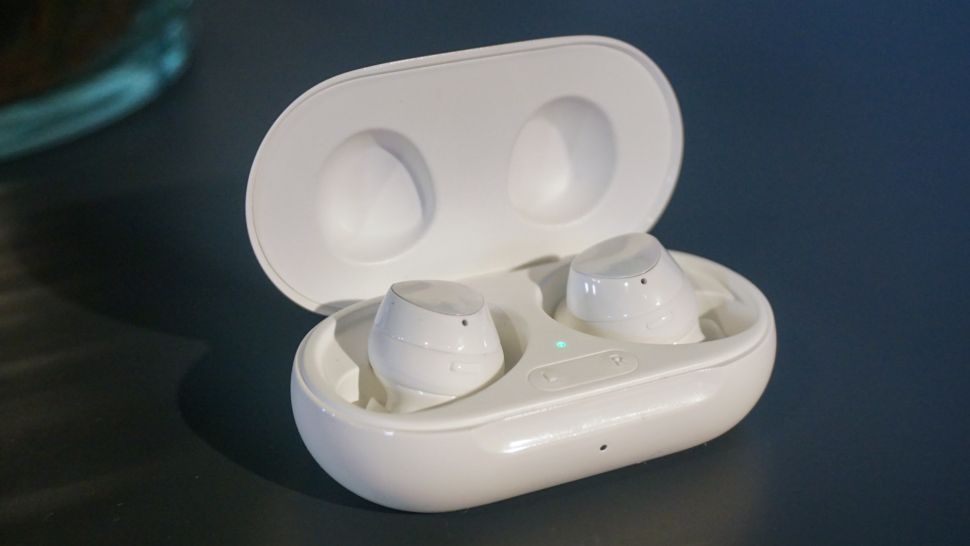 The new Galaxy Buds Plus sport a very similar design to their predecessors, with slick pearlescent housings and adjustable silicone eartips. They come in red, white, blue, and black, and you should be able to find a color that suits your sense of style – something that can’t be said for the strictly-white AirPods.

Eschewing the long ear stems of the AirPods and the AirPods Pro, these sleek little buds pop neatly into their charging case and into your ear, being held in place by a small nub that catches a fold in your outer ear.

At 17.5 x 22.5 x 19.2mm, they fill up most of the ear canal (which helps them stay in while working out) and protrude slightly out of the ears. Because of that design choice we had issues wearing these earbuds while laying in bed as the constant pressure on the buds from the pillow made them uncomfortable in the ear.

In terms of customization, inside the box you’ll find additional eartips in three different sizes, a larger nub to hold the earbuds in place if they’re falling out and a rubber ring if you don’t want any nub on the outer edges of the buds. 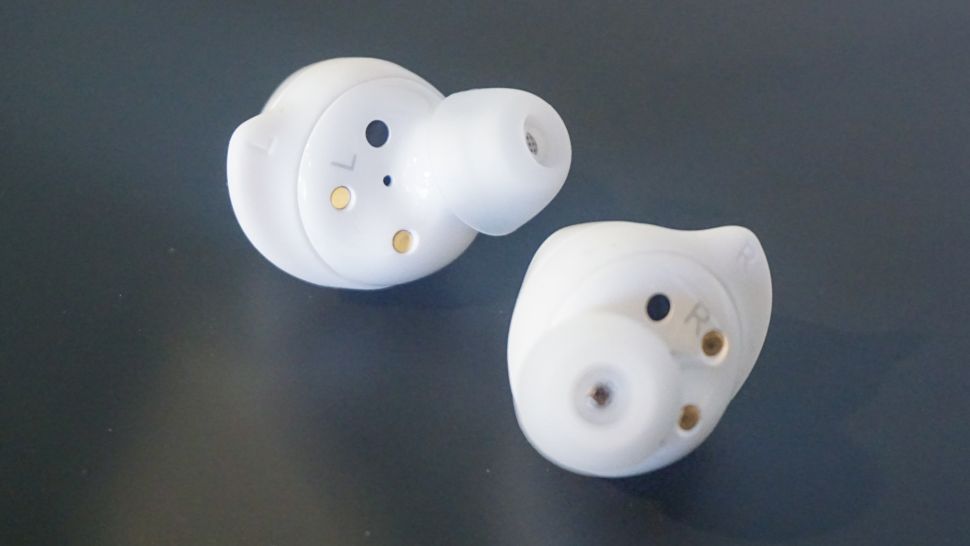 On the outside you’ll find the touch capacitive button that understands single, double, triple and long presses. Single, double and triple do what you’d expect them to do and the long press can either activate your virtual assistant, lower the volume or turn on ambient sound amplification.

Using the touch capacitive button as the means to control the earbuds can be slightly uncomfortable at first, as pushing the button pushes the earbuds further into the ear canal, but you’ll soon learn to exert less pressure when using it. It would’ve been nice if Samsung decided to implement an always-listening virtual assistant here, but unfortunately decided not to.

The only other glaring issue we’ve found so far with the Buds Plus is that they’re only IPX2 splash-resistant. That means they’re mostly fine for workouts, but won’t be the kind of thing you’d want to take with you to the pool or beach, where they could easily get damaged. For comparison the Apple AirPods Pro are IPX4 water-resistant, and while that’s not as good as being fully waterproof, it should assuage any fear you have of damaging them at the gym or outside in the rain.

As for the case itself, it’s fairly light and smooth with rounded edges. It should fit fairly easily in your pocket and provides an additional charge for the earbuds in between uses. As you’d expect, the charging case uses USB-C, like Samsung’s flagship phones, which means you don’t need to carry a separate cable. 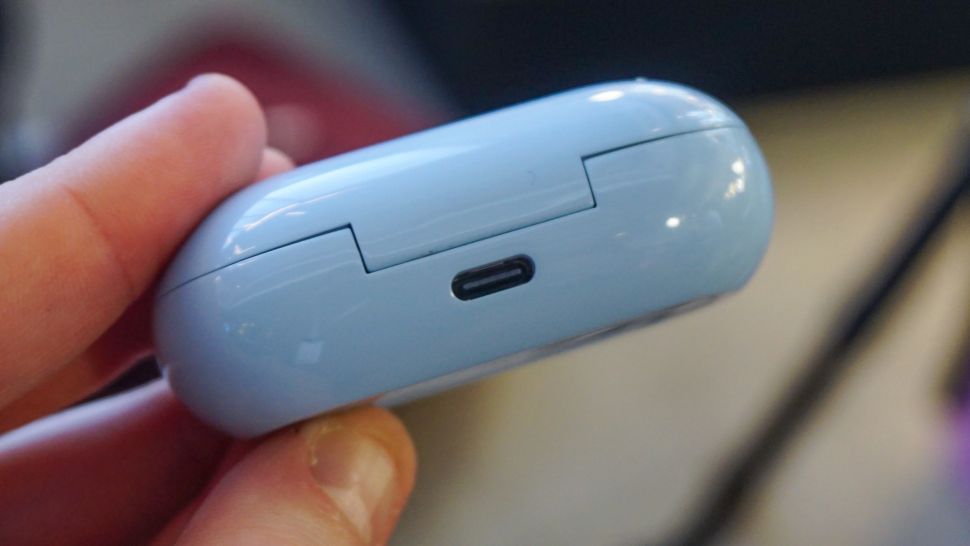 The Galaxy Buds Plus boast a far longer battery life than the original Galaxy Buds. The earbuds themselves contain 11 hours of charge, while the charging case provides an additional 11 hours, bringing the total battery life to 22 hours.

That 11-hour battery life is pretty long for earbuds – but for the charging case, it’s not a huge amount of battery. For comparison, the Apple AirPods contain 5 hours in the buds themselves, with an additional 20 provided by the charging case, for 25 hours in total. It’s nice to see the Buds Plus with a larger internal battery, but a shame the charging case didn’t get something more substantial.

Throughout our week of testing we’ve only had to charge the earbuds and their case once, and that’s with pretty heavy listening (four-plus hours each day) at medium volume. If you need to listen to your music at a higher volume to drown out outside noise, then expect to charge these every few nights.

In terms of wireless connectivity, Bluetooth 5.0 provides a stable wireless connection that never once dropped on us, even in a crowded area. For comparison, the AirPods still only support 4.2, which is pretty old now, but do have the benefit of the H1 Chip that optimizes battery life and sound quality on the earbuds.

Unfortunately, however, neither the Samsung Galaxy Buds Plus nor Apple AirPods Pro support higher-end audio codecs like aptX, aptX Low Latency or, even better, LDAC. For now your only options are SBC and AAC – though the inclusion of the latter means the Buds Plus will work with iOS.

Setting up the earbuds can either be done by pairing via Bluetooth for basic playback or by downloading the Galaxy Wearable or Samsung Galaxy Buds Plus app from the Google Play and Apple App Store. With those you’ll be able to customize the headphones and set up ambient noise reduction so it’s well worth downloading. We found both of the apps to be fairly intuitive to use, and they offer a few sound tweaking options and ambient noise amplification that we’ll get into in a minute.

Finally, the last feature worth pointing out is that if you have multiple devices, the Galaxy Buds Plus support multi-pairing, allowing them to connect to several devices without needing to re-pair them every time you go to use them. 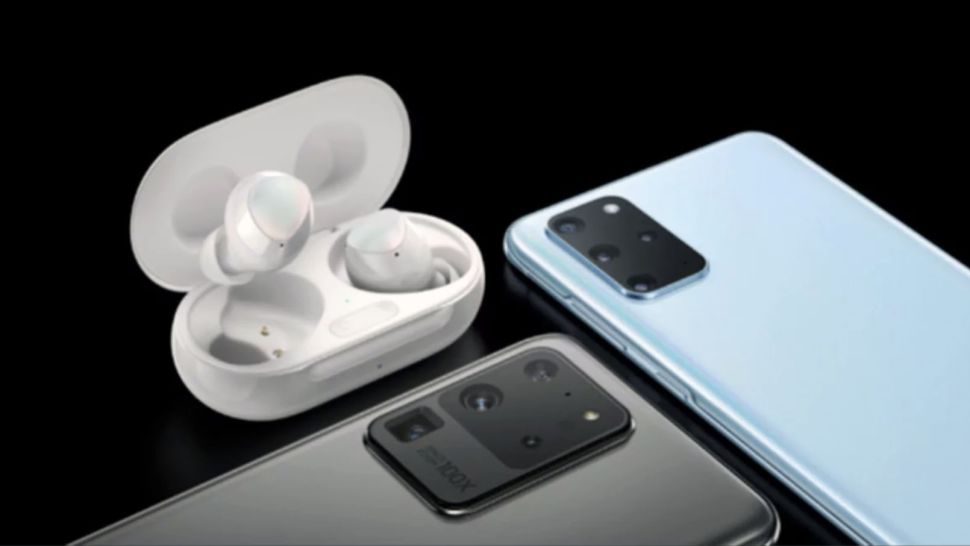 The headline news in the audio department is the new dual-driver system that the Samsung Galaxy Buds Plus use. There’s now a woofer and a tweeter to expand the range of the earbuds and lead to an increase in overall clarity.

After spending a lot of time with them we feel like that’s definitely the case, and can appreciate the sound Samsung has crafted here that’s rich, warm and easy to listen to for an extended period of time.

To achieve that, Samsung’s DSP definitely dials back bass and ups the mids and highs – making these great headphones to use when watching YouTube or Netflix around the house and even makes some genres of music sound pretty good. Listening to Green Day’s atrocious new album Father of All… was slightly more bearable thanks to the Bud Plus’ mid-range musicality, and a tour through Red Hot Chili Peppers’ old catalog with these earbuds allowed us to appreciate the interplay between Flea’s bass and Frusciante’s guitar like never before.

That said, songs that should have phenomenal bass response, like Brass Monkey by Beastie Boys, sound a bit subdued to other earbuds, especially a pair like the Powerbeats Pro that emphasize the low-end.

Using the Samsung Galaxy Buds Plus and/or Samsung Wear app you can customize the sound of the earbuds (there’s options for Soft, Dynamic, Clear, Treble and Bass Boost) but there’s not a significant difference between them.

While the increased clarity is the highlight of the new design, Samsung says it’s also increased the amount of internal microphones by one and that lead to better call quality. That claim held true in our testing as anyone we called with the earbuds reported that they sounded as good as talking directly into the phone’s mic.

Having the extra mic also means that ambient noise amplification is better this time around, too. Obviously ambient noise amplification – which pipes in outside noise rather than cancel it out isn’t as good as noise reduction or noise cancellation, but it can be helpful at airplane terminals or bus stations when you’re waiting for a crucial piece of information over the loud speaker or while riding a bike.

The biggest criticism that we can levy against the Samsung Galaxy Buds Plus is, though, is that they don’t offer active noise cancellation nor do they provide much in the way of passive noise reduction. That means, if you plan on wearing these out and about, expect to hear a lot of the outside world while listening to your music. That’s fine if you’re at the gym and don’t mind hearing a bit of the background noise or if you’re at the office and still want to be able to hear what coworkers are saying nearby, but those looking for total aural isolation will have to look elsewhere.

As far as dual-driver true wireless earbuds go, there’s a lot to like about the Samsung Galaxy Buds Plus. They have great clarity and a good mid-range. They’re not as bass-heavy as we might’ve liked, but what’s on offer is far better than the previous iteration.

Not having noise cancellation or a higher level of water resistance are two of the Buds’ biggest weaknesses, but its lower price, new iOS compatibility and extended battery life should help it keep pace with the AirPods and AirPods Pro.

Don't miss a deal at Ancestry
Best offers at Marks and Spencer
Discounts, Sales and Deals at Vodafone UK
Save your money with Carphone Warehouse
Online-Shopping with Sky
Best products at Sephora
Latest Posts