If it wasn’t for an always-on display, the Apple Watch 5 would be one of the most minuscule updates for an Apple product yet. However, not needing to wake the display is a real boost for the Watch 5, and worth a whole new launch.

The Apple Watch Series 5 isn’t going to blow you away in the same manner as the Apple Watch 4 did – but it does pack one, very key, upgrade over last year’s model.

While the iPhone is feeling very similar year-on-year these days, the Apple Watch underwent a big overhaul last year, so not a lot was expected in terms of improvements this time around.

However, there has been one big change: the the Apple Watch 5 display doesn’t turn off. Its new always-on display feature allows you to glance down at your Watch – whether that’s in a meeting or in a workout – and see what’s on the screen.

Ultimately, though, this is a very expensive gadget to strap to your wrist – so we went hands-on with the new Apple Watch 5 to see if it’s special enough to convince early adopters to upgrade. 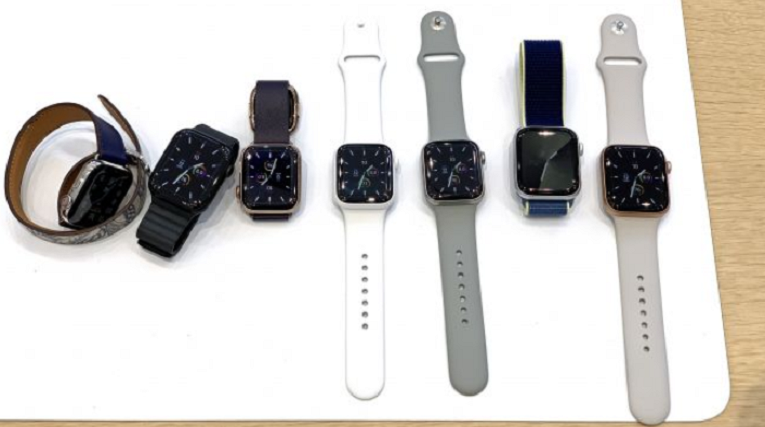 Announced alongside the iPhone 11 range at this year’s launch event, Apple has confirmed that the Apple Watch 5 release date is Friday, September 20. That’s the same day the new iPhones.

The Apple Watch 5 starting price is for the aluminum case, which comes in three familiar finishes: Gold, Space Black, and Silver. One new perk, this year’s case is made of 100% recycled aluminum.

Following rumors, the Watch will once again come in a white Ceramic finish, starting at $1,299 with a sport loop and going up to $1399 with a leather loop.

There are new Nike models with additional bands, loops and faces. There are also Hermes models, with Space Black stainless steel cases and noir leather bands. Apple didn’t announce whether these models would be available in both GPS-only and cellular.

Sticking with the same OLED technology that’s served it so well over the years, the Apple Watch Series 5 comes with a bright and vivid display that’s easy to see on the wrist.

Here’s the big change: Apple has dropped the ‘raise to wake’ functionality to see the time or a notification (where you have to flick or raise your wrist to turn on the display).

We’ve always been impressed with how accurate the previous line of Watches have been at knowing when you’re looking at the screen, but now that’s all over. You can either see the display in great, bright detail, or the OLED display will massively dim and you’ll be able to see key information. 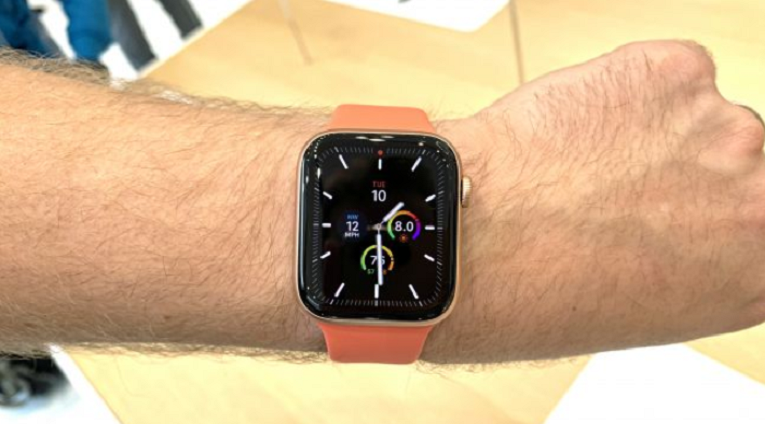 In our tests with it, it was certainly an effective skill for the watch to gain. Of particular benefit was the fact it works in the Workout app, as you can now just see what’s on the screen without having to flick the wrist.

In a strength workout or fast run, you don’t need that extra hassle – and it’s great to see Apple drop it. However, it’s not clear how this will work with third-party apps, so we’ll need to try that out in our full review. 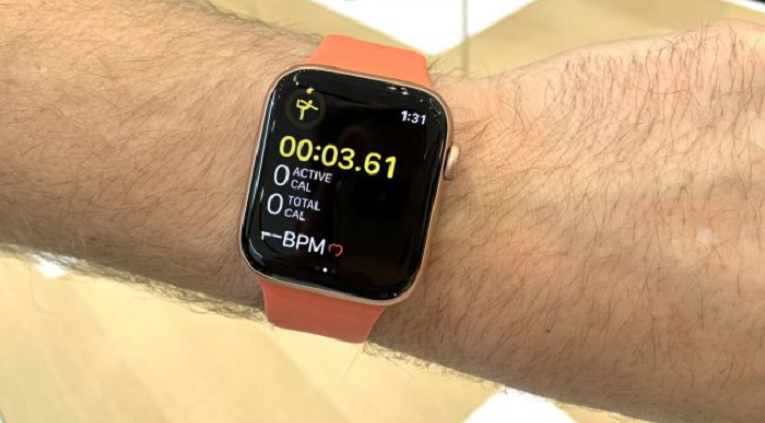 But the viewing angles, in particular, are impressive when the Watch 5 is dim – you can see it from pretty much any way you want to squint at it, and that’s something really needed.

The larger 40mm and 44mm designs from last year’s Apple Watch 4 remain, which again is expected for a couple of reasons: firstly, Apple keeps similar designs for years when iterating on its products, and otherwise it would mean even more sizes of bands and accessories on the market. 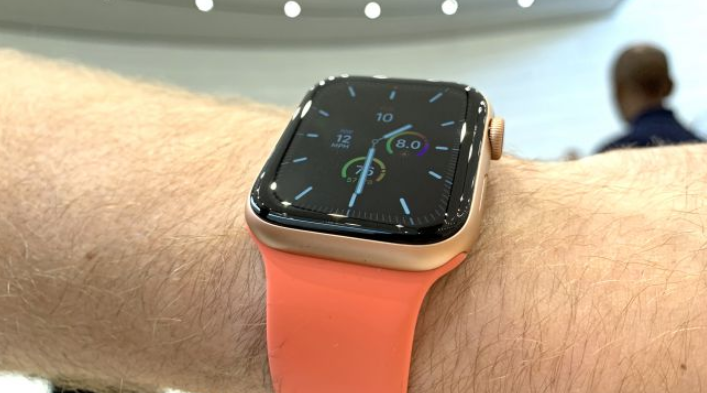 The design of the Watch 5 is as most would expect: rounded edges with the small speaker grilles in (which, remember, can now speak to you to tell you lap or split times as you run around) as well as water resistance up to 5ATM pressure – so swimming with this watch is easy.

The biggest change design-wise is in the materials used – Apple has unveiled the Watch 5 in new ceramic and titanium variants (although the former has been used in older models), in a bid to increase the range of price points it can sell its smartwatch at. 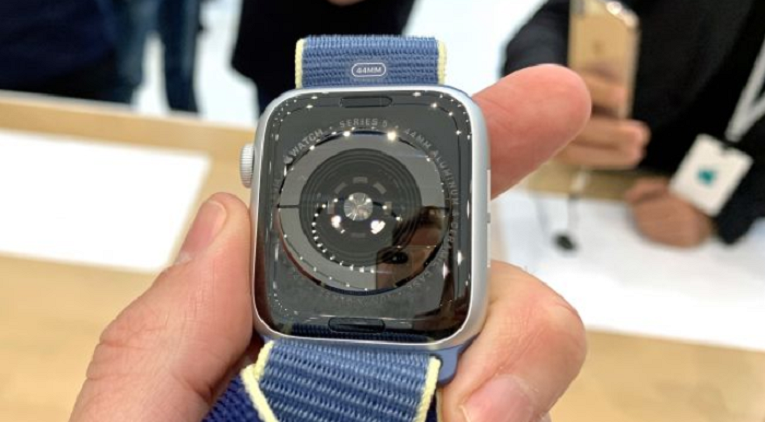 These feel nice on the wrist, although we weren’t impressed with the ceramic option when it first came out. Well, perhaps we could rephrase that – it felt premium for sure, but it didn’t quite feel worth the extra cash Apple was asking for it.

But then again, perhaps we’re not the target market of bling that this device is aimed at. Even though the cost of the titanium model is a little steep, offering the Apple Watch in a new material might, again, entice the upgrade.

There’s not a lot of difference at all between the Apple Watch Series 4 and Series 5 – this is mostly just an update to that model, but the large display and rounded edges still feel nice on the wrist, and the burgeoning range of bands (not just from Apple) make it a decent choice for iPhone owners.

Apple hasn’t added much in the way of fitness capability with the new Watch 5, thanks to there not being a huge amount of new hardware to work with.

The ECG monitor remains, but that was the headline of last year and it’s beginning to get medical approval in a number of countries now.

The much-vaunted sleep tracking didn’t materialize, which makes sense when the battery life hasn’t improved, but you’ll obviously be able to track the full range of fitness options (from running to swimming to yoga) from the watch – as well as track your output on gym equipment like steppers or treadmills.

Beyond that we’re going to need to test out the fitness prowess of the Apple Watch 5 in the real world – even an improved GPS is hard to assess, as the Watch has never let you know when it’s locked onto a satellite, leaving you to just hope that it roughly knows where it is. 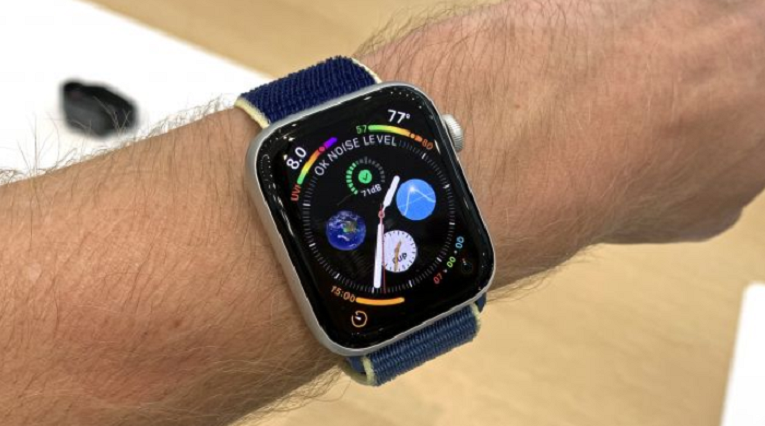 Apple, once again, hasn’t increased the battery life of its Watch series, sticking with the same 18-hour life that it’s promised (and over-delivered on) since the inception of the range.

How this translates into real-world use, with an improved processor inside to help make things more efficient, remains to be seen – but we’re looking forward to seeing if it can match the burgeoning battery life of the likes of the Samsung Galaxy Watch Active 2 and friends.

The key change here is that always-on display – for Apple to increase the amount of time the display can stay on without needing to drop the battery life is something we didn’t expect, although it will be interesting to test whether the day-and-a-half battery life we get with the Apple Watch 4 remains. 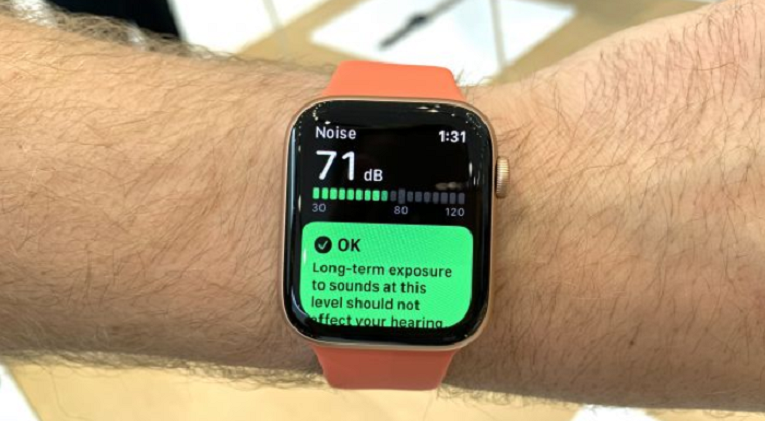 If you were excited for an all-new Apple Watch, you can open up the box marked ‘2020’ and slide that enthusiasm in there, before storing it dustily under the bed for another 12 months.

For the Apple Watch 5 is merely iterative, a minor upgrade on the Watch 4 in so many ways. The one key improvement is to the always-on display, which is something we didn’t expect to see this year and really does deliver.

But anyone hoping for something more dramatic and new in 2019 will be disappointed. This is effectively the Apple Watch 4S with a new screen, something a little different to last year’s model.

That’s not to say it’s a bad watch at all – any improvements are always welcome – but one suspects there’s more that Apple can do – and arguably needs to do – if it’s to continue as one of the frontrunners in the smartwatch stakes.

Don't miss a deal at The Home Depot
Best offers at House of Fraser
Discounts, Sales and Deals at Ancestry
Save your money with Farfetch
Online-Shopping with O2 Mobile
Best products at Boohoo
Latest Posts