Google Pixel 4a review: Back and better than ever

The Pixel 4a is a fabulous smartphone: compact, lightweight, streamlined and very reasonably priced

The Pixel 4A has been on and off for months now but Google’s cheapest smartphone is finally with us. It costs less than last year’s phone at launch, has a larger screen housed in a slim, polycarbonate body and its camera continues to impress.

But with strong contenders recently launched by OnePlus, Motorola and Apple, the Google Pixel 4A is going to have a much tougher time convincing potential customers this time around.

Google Pixel 4a review: What you need to know

The main news is that there is only one of these low-priced Pixels in 2020, where last year we had two to choose from. The new handset sits neatly between the old pair on screen size, offering a larger 5.8in AMOLED display and a similar 1,080 x 2,340 resolution. 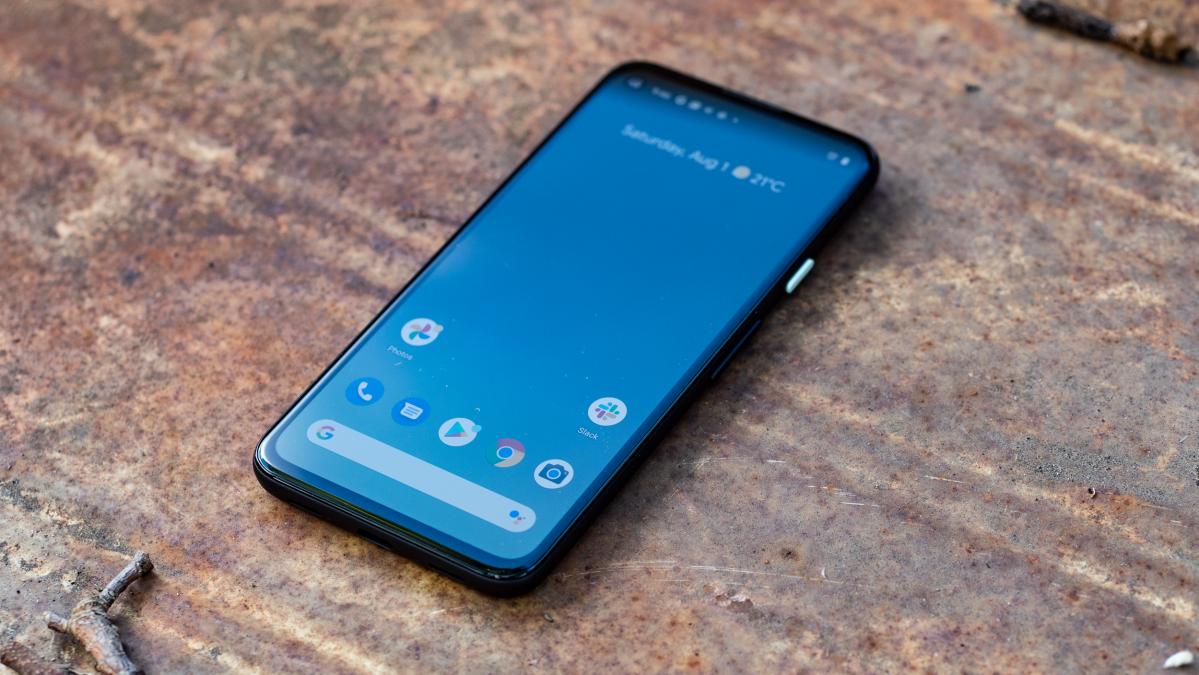 Aside from this, the Google Pixel 4a continues in the same vein as its predecessors. It has a simple, polycarbonate plastic body, and is powered not by Qualcomm’s top-end 8-series CPU but by a processor one rung down on the performance ladder: a 2.2GHz octa-core Snapdragon 730G, accompanied by 6GB of RAM and 128GB of storage.
The Pixel 4a also keeps things simple on the camera front, too, with a single 12MP module and an 8MP unit on the front, an approach that’s at odds with the six cameras adorning the similarly priced OnePlus Nord and Moto G 5G Plus.

The Google Pixel 4a has no 5G support, however, which is surprising when rivals are beginning to move their mid-range handsets over to the new technology already. Google has announced that a special 5G version, helpfully titled the Pixel 4a 5G, will be launching alongside the Pixel 5 in the autumn.

As mentioned, the Google Pixel 4a launches in October at a lower price than the 3a did originally, at a very reasonable £349.

That sets it squarely against a host of strong alternatives. The superb OnePlus Nord is probably the strongest of these, with 5G support, a total of six cameras and a larger 6.44in display for £369. 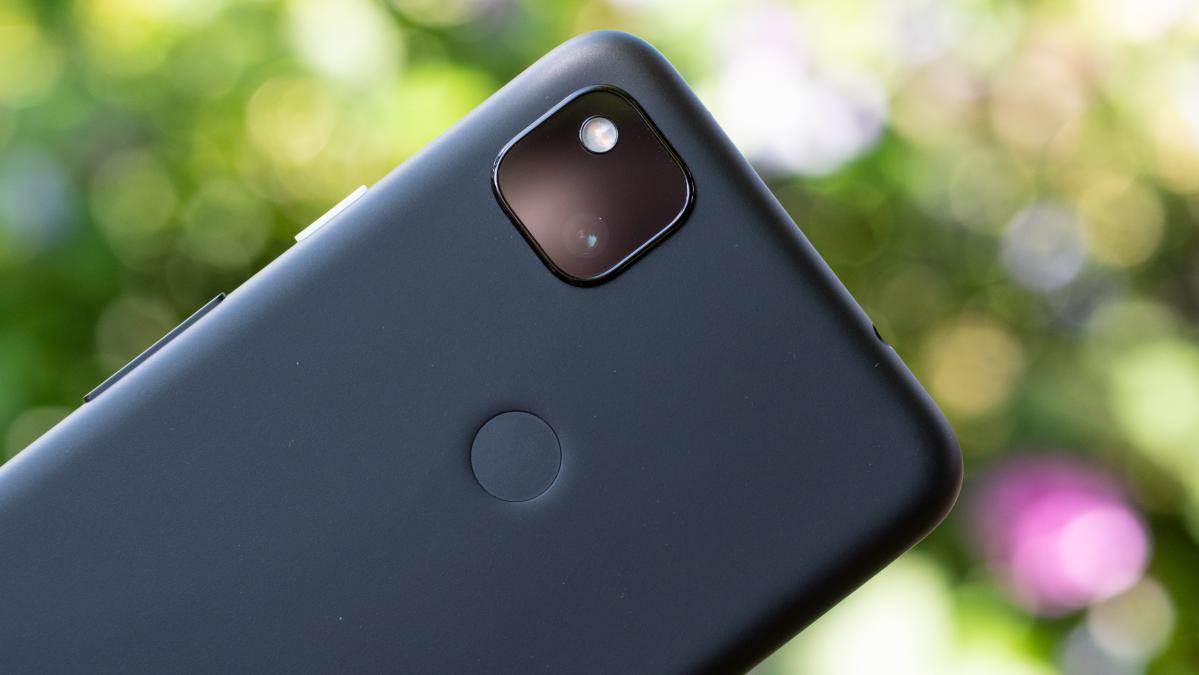 The Motorola Moto G 5G Plus is another. It has a similar set of features and an even bigger 6.7in screen at the cost of £300. And, if battery life is your thing, why not opt for the Samsung Galaxy M31 with its massive 6,000mAh battery for just £245?

At the smaller end of the spectrum, and if you don’t mind opting for an Apple handset, there’s the iPhone SE (2020). Just like the Pixel 4a it’s small and light and fairly basic, it has only one camera and costs £70 more at £419 for the 64GB model.

The Google Pixel 4a certainly bucks the trend when it comes to offering just one size but that’s not the only unusual thing about it. There’s also only one colour – “Just black” – and as the 3a did in 2019, it’s built from a block of matte-finish polycarbonate rather than more exotic materials.

Despite this, I rather like the look of the Pixel 4a. It has a simple, functional appearance that, despite the lack of glossy glass and gleaming aluminium or steel, doesn’t feel cheap at all. It barely picks up fingerprints and it’s filled with nice user-friendly touches. 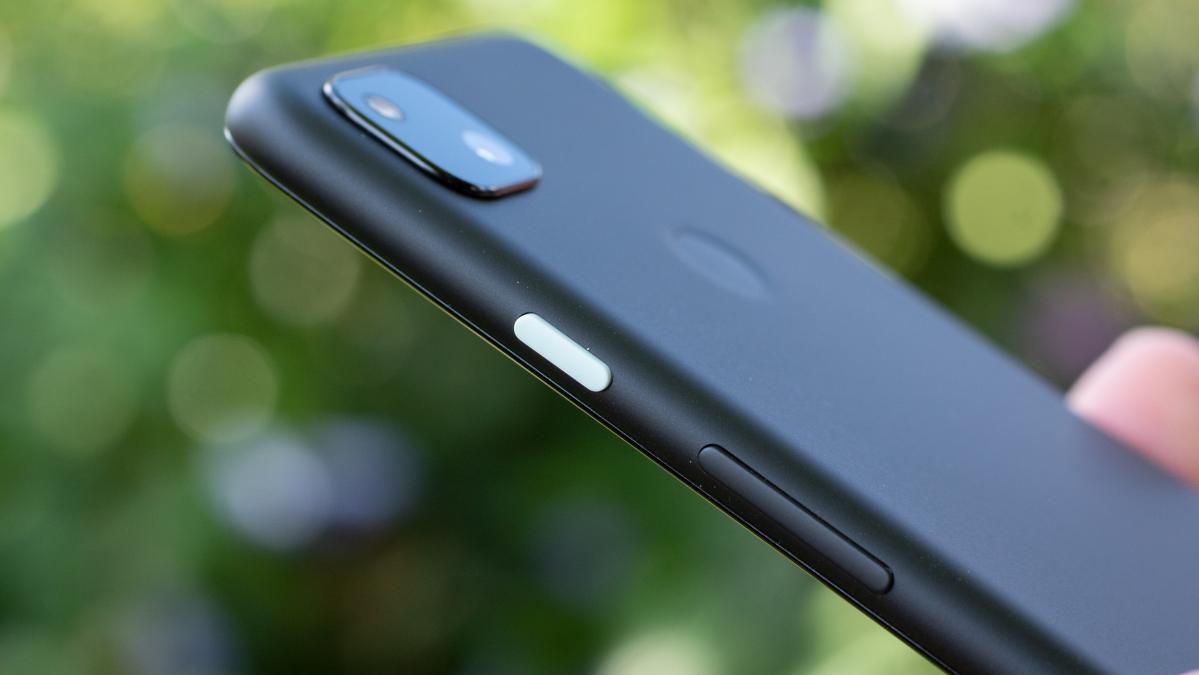 I love the way the circular fingerprint reader at the rear seems to blend seamlessly into the plastic housing, with the white power button on the right edge making it easy to differentiate from the volume buttons so you don’t switch off the phone by accident.

It’s also great that it’s small enough to hold and operate with one hand without being so small that you’ll yearn for something bigger. Indeed, at 69 x 8.2 x 144mm (WDH), the Pixel 4a is only a fraction larger than the iPhone SE (2020), which has a smaller 4.7in display. That’s largely due to the edge-to-edge AMOLED display and the slim bezels that surround it, of course.

The only things I’d complain about, in fact, are the lack of official water-resistance and memory expansion capabilities, although it’s worth noting that you do get double the storage than you do with the iPhone SE (2020).

The Pixel 4a is a thoroughly modern-looking phone and, coupled with the very latest Google Pixel launcher software, based on Android 10, it’s a dream to use, too.
Indeed, the Pixel 4a comes with all the features the Pixel 4 did with some new and refined ones thrown in for good measure. 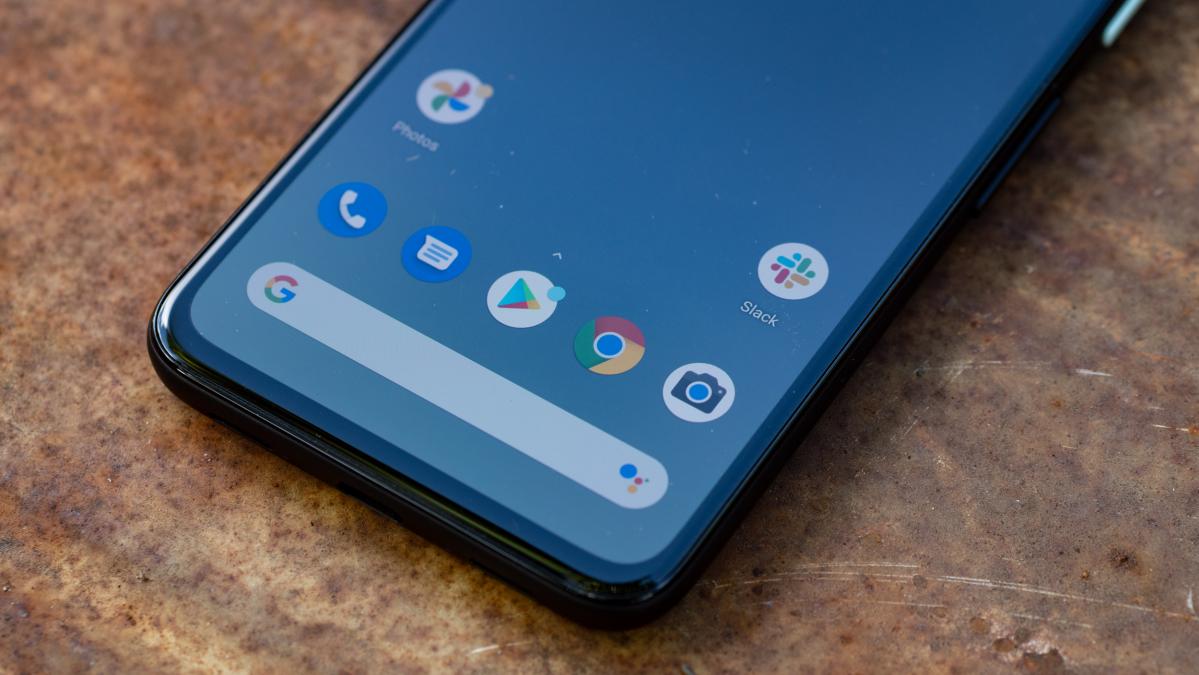 So you’re getting the Pixel 4’s fabulous Recorder app, which turns voice recordings into text almost magically (and without the need for an internet connection), but with extra features. On the Pixel 4a you can now start, stop and search voice recordings, using Google Assistant, and you can now export directly from Recorder to Google Docs.
It’s also now possible to use the same voice recognition tech to add a “Live Caption” box (essentially, a high-technology version of subtitles) to audio and video calls on your phone, even in third-party apps. Previously, this was only available for general audio and video playback, not calls.

On the camera front, there are upgrades to Google’s Night Sight and astrophotography modes, Live HDR+ and the clever Super Res Zoom feature, which uses hand shake to fill in the missing details as you zoom into a scene.

There’s a lot more besides this, including Google’s gesture navigation and some new updates to the Personal Safety app, but above are the main highlights and big new features.

That body-filling display is another great feature. It’s an AMOLED screen measuring 5.8in across the diagonal with a pin-sharp resolution of 1,080 x 2,240 and a pixel density of 443ppi. It supports HDR content, too, and the selfie camera punched into a small hole in the top-left corner, is mercifully unobtrusive.

As you’d expect of an AMOLED display, the contrast ratio is effectively perfect. Brightness is excellent, too, peaking at 437cd/m2. It isn’t the brightest display I’ve come across in a smartphone but it’s bright enough to ensure readability in all but the sunniest of days. 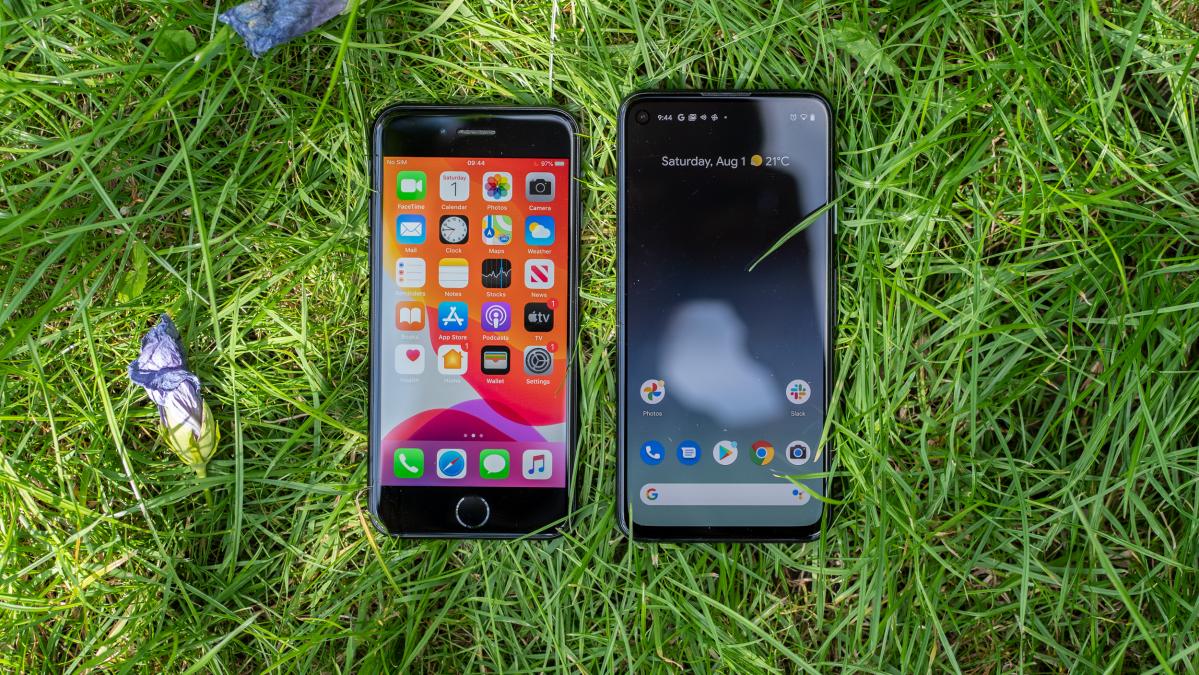 As usual with modern smartphones, there’s a number of different colour modes to choose from in the Settings menu. The phone comes set to “Adaptive” by default but you also have the choice of Natural and Boosted presets.

In Natural mode, the phone covers 93.7% of the sRGB colour gamut out of a total volume of 94.5% with an impressive average Delta E score of 1.05 (the lower the better). That’s slightly worse than the Pixel 3a’s result from last year but still an excellent set of figures for a phone that costs as little as this.

In Boosted mode, colour coverage most closely matches the DCI-P3 colour space, with coverage of 83.9% out of a volume of 84.2%. The adaptive mode appears to fall between Boosted and Natural, with a DCI-P3 coverage of 80.5% (out of 80.6% volume).

HDR playback is less impressive. With Boosted or Adaptive mode enabled, HDR video tends to look a touch too dark for my liking, although it’s not a whole lot worse in this respect than the OnePlus Nord, which is guilty of the same sin.

The Pixel 4a’s camera is much more impressive. There may only be one camera at the rear – with no ultrawide angle shooter, no zoom or macro, and no depth sensor for portrait shots – but that doesn’t really matter.

The 12.2MP f/1.7 camera on the Pixel 4a’s rear, combined with Google’s computational photography genius, is capable of serving up some truly astonishing results without the need for all those extra beady eyes. The phone’s Super Res Zoom feature is amazing at providing convincingly sharp digital zoom shots without requiring a separate zoom camera.

Likewise, portraits shot on the Pixel 4a look simply brilliant. Whether in good light or bad, backlit or indoors, every portrait I captured came out looking sharp and crisp with lovely neutral colours, flattering skin tones and a creamy, simulated bokeh background with my subject isolated in sharp relief in the foreground.

Indeed, for zoom and portrait shots, the Pixel 4a beats the OnePlus Nord hands down and I’m of a mind that it’s better than the iPhone 11 Pro Max for portraits, too. And remember that’s a phone that costs nearly three times as much.

For regular photographs and video, there’s a lot less between the two cameras. But the Pixel still puts in a sterling performance. Low light shots, in particular, are impressive, especially captured in Night Sight mode.

And although you’re only able to shoot 4K video at 30fps (you have to drop to 1080p for 60fps), it’s stabilised effectively and with marginally fewer glitches than on the Nord.

Where the Nord does pull ahead somewhat is with its ultrawide cameras, both on the rear and in its 32MP selfie camera. I can’t say I’d miss those all that much if they were taken away, though.

What I might miss, is the ability to upgrade my phone contract to 5G, because that’s the big feature missing from the Google Pixel 4a’s arsenal at the time of writing. Even the phone’s 4G speeds aren’t that spectacular, with the Qualcomm Snapdragon 730G’s embedded X15 4G modem capable of up to 600Mbits/sec downloads and 75Mbits/sec uploads. A special 5G model is coming alongside the launch of the Pixel 5, but as it stands all we have is 4G connectivity at the moment.

With 6GB of RAM onboard, however, that processor helps the Pixel 4a largely keep up with its close rivals. Only the iPhone SE (2020) is significantly faster and, while it’s nice to have a little extra performance headroom, the Pixel 4a feels perfectly responsive in day to day use.

In the stamina stakes, the Google Pixel 4a is held back by its 3,140mAh battery, which is somewhat smaller in capacity than its rivals. The OnePlus Nord’s is larger at 4,115mAh in size and the Motorola Moto G 5G Plus’ is a huge 5,000mAh, not to mention that the cheaper Samsung Galaxy M31 is equipped with a huge 6,000mAh power pack.

Hardly surprisingly, the Pixel trailed these rivals in our video rundown test. However, it still managed to post a respectable time of 18hrs 43mins and it’s a whole lot better than its compact rival, the iPhone SE (2020), which only lasted 11hrs 35mins in this test.

So, where does that put the Pixel 4a? If you’re after a compact phone that won’t make too much of a bulge in your pocket, then it’s definitely the phone for you. Although it isn’t as fast as the Apple iPhone SE (2020), it is a better all-rounder, with a bigger screen, superior portrait photography and far superior battery life.

Compared with the OnePlus Nord and the Moto G 5G Plus, it’s a more nuanced decision. While both these rivals have bigger screens, more cameras and better battery life, the Pixel 4a has a charm all of its own; and with the Google Launcher on board as well as that amazing camera, there are plenty of reasons to pick one up.