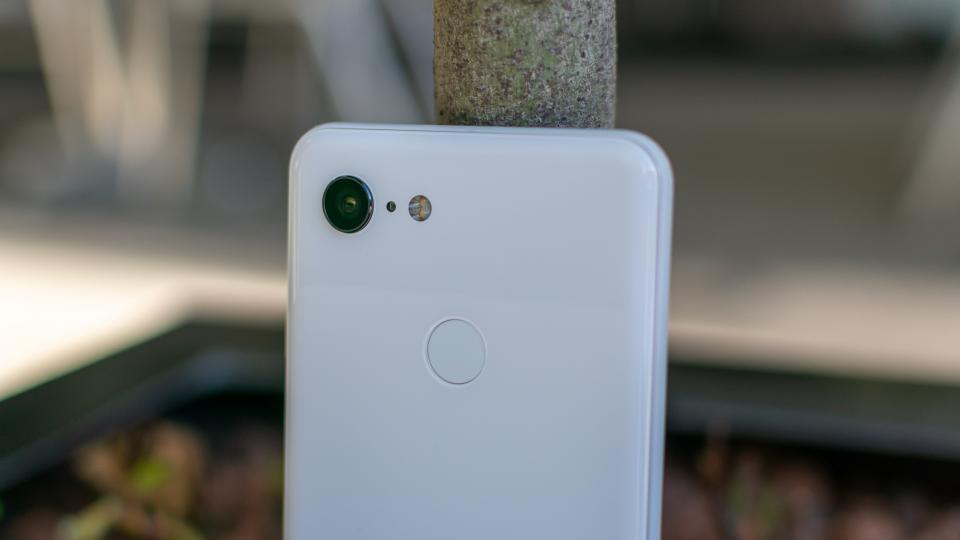 It’s all about photography and Google says the Pixel 3 provides the best smartphone camera experience in 2018. More on that later, but rest assured that the new smartphone lives up to its predecessor – the Pixel 2 – when it comes to taking eye-catching pictures.

That’s all sounding rather good so far, isn’t it? Well, you might be disheartened to hear that the Pixel 3 has seen a slight price hike compared with last year’s model. Launching in phone shops up and down the country on 1 November, the Pixel 3 starts at £739 for the 64GB model – that’s £110 more than the Pixel 2. 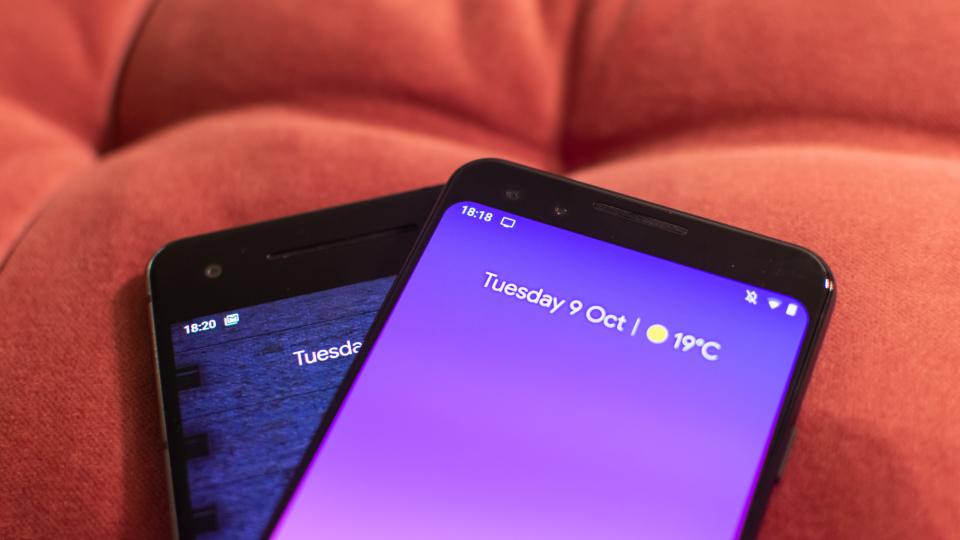 Because at that price, well, you can expect the Pixel 3 to face competition from all corners of the flagship arena. Apple’s recently launched iPhone Xs is your Apollo Creed to Google’s Rocky Balboa and starts at £999. Then there’s the Samsung Galaxy S9, which has recently dropped to a mere £500. Huawei’s upcoming Mate 20 Pro will make a last-minute appearance, too, although we don’t know how much that will cost yet.

Acting as a double act (like Laurel and Hardy, but in phone form), there are two Pixel handsets launching this year. Both the Pixel 3 and Pixel 3 XL don’t differ too much, though, and are near-identical in terms of specifications and design, aside from one obvious difference.

The normal Pixel 3 doesn’t include a chunky notch creeping into the top of the screen. Instead, the Pixel 3’s all-screen frontage looks more like the Galaxy S9 and Xperia XZ3, with forehead and chin bezels sitting above and below the display, surrounding the pair of front-facing speakers.

Flip the phone over, and you’re treated to a similar-looking mash-up of matte and glossy glass. The solitary rear camera unit has also shifted slightly more to the left, and the top glass panel is ever-so-slightly thinner this time around, but the differences end there.

The circular fingerprint reader is still on the back of the phone for secure unlocking. The USB Type-C charging port and SIM tray are found on the bottom edge, with the power button and volume rocker on the right. The Pixel 3 is also IP68 dust- and water-resistant and supports Qi wireless charging for the first time. 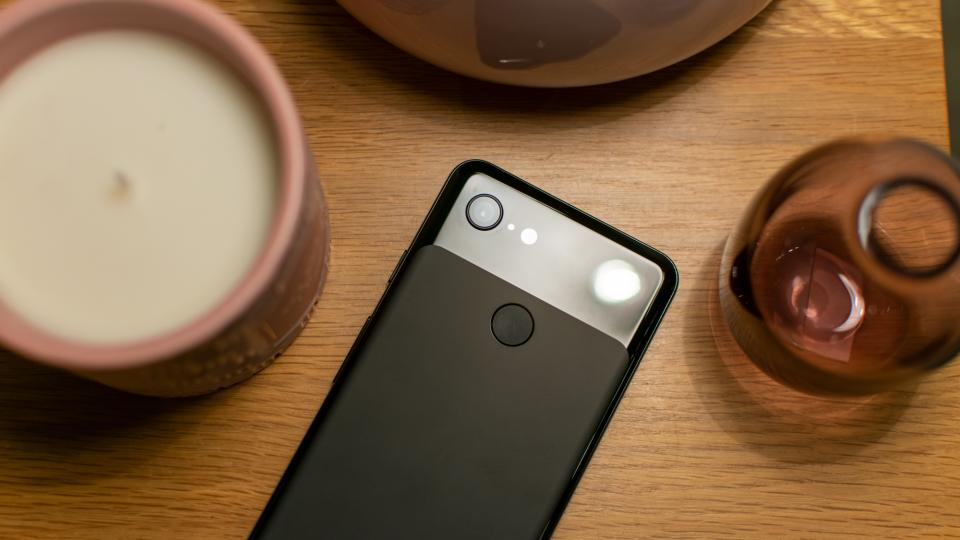 Google’s “Active Edge” feature reappears again, which activates Google Assistant by squeezing the sides of the phone. Think of it as the same as HTC’s efforts, except you can’t assign it to perform other actions. It does, however, benefit from machine learning algorithms that know the difference between an actual squeeze and an accidental one.

The Pixel 3’s screen specifications are as expected. It’s fitted with a 5.5in, 18:9 aspect ratio, OLED panel with a screen resolution of 2,160 x 1,080. It’s an edge-to-edge effort this time around. That means we have much more screen to work with than ever before, without the need for an increase in the phone’s size.

Now that I’ve had a chance to test the Pixel 3’s screen with our in-house display colourimeter, I can confidently say that this is Google’s best-looking phone yet. 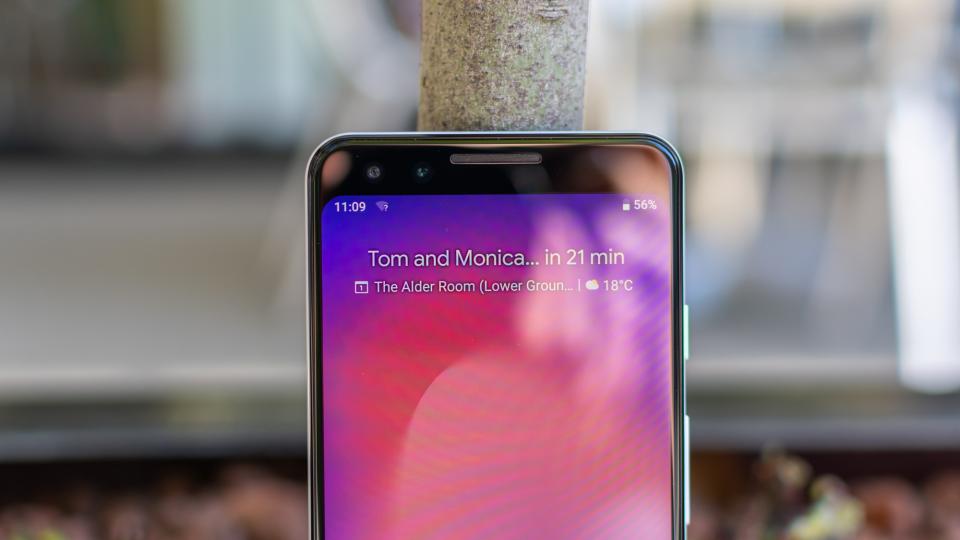 On the Pixel 3’s “natural” display profile – “adaptive” and “boosted” modes are a touch too oversaturated for me – our X-Rite calibrator recorded a total sRGB coverage of 94%. Colours are practically faultless, too, with an average Delta E of 1.25 (with 0 being perfect).

A perfect contrast ratio of infinity:1 helps make text look pin-sharp, and movies and photos benefit from plenty of pop. The screen is also capable of reaching a maximum brightness of 398cd/m² with the auto-brightness setting engaged, which isn’t quite good enough for watching Doctor Who in the autumn sun. A circular polarising layer also helps reduce screen glare.

Surprise, surprise, the Pixel 3 is powered by Qualcomm’s latest top-end mobile processor, the Snapdragon 845. This octa-core, 10nm chip is clocked at 2.8GHz, powers the majority of 2018’s fleet of flagships and is certainly no slouch in the performance department. 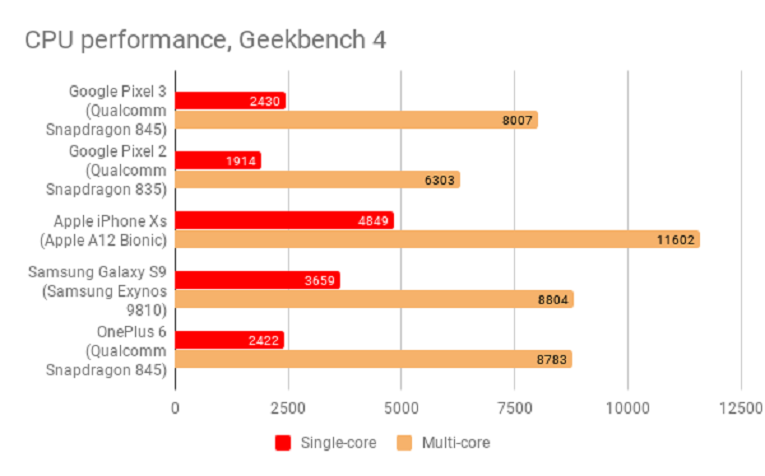 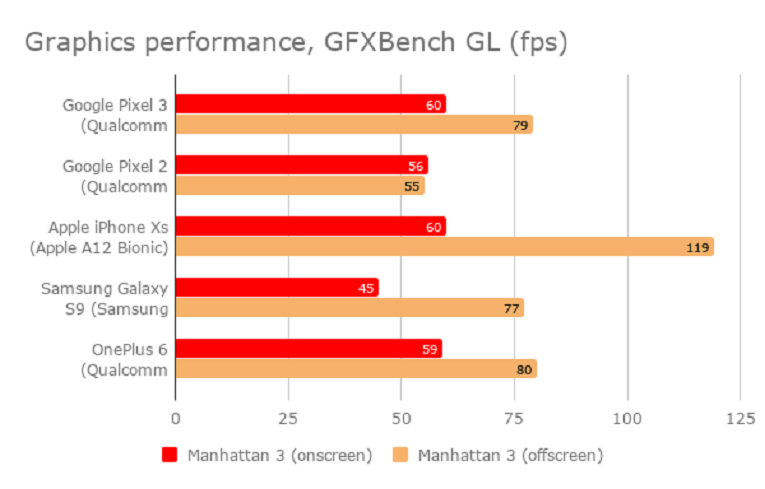 On the gaming front, the Pixel 3 is an equally notable performer. GFXBench GL’s Manhattan 3 onscreen and offscreen GPU tests recorded faultless average frame rates of 60fps and 79fps respectively. In layman’s terms, you shouldn’t encounter any problems running the latest graphically intensive games on the Google Play Store, at least for a couple of years.

An area where the Pixel 3 doesn’t outperform its predecessor, though, is in battery life. Sadly, it looks like the more demanding chipset has taken its toll on the Pixel 3’s stamina, which was only able to reach 12hrs 22mins on a single charge during our in-house battery-rundown test. That’s certainly not an abysmal score by any means, but you will be topping up your Pixel 3’s battery much more often than last year’s flagship.

However, this isn’t a stock Android experience. Instead, Google’s own Pixel Launcher makes another appearance, which slightly tweaks the UI and brings with it a handful of Pixel-specific features.

The way the app drawer works has changed slightly. Now, if you swipe up on the homescreen, you’re presented with a scrollable list of your recently used apps, as well as a selection of five of your most-used applications. Swipe up a little further and all of your apps are visible. 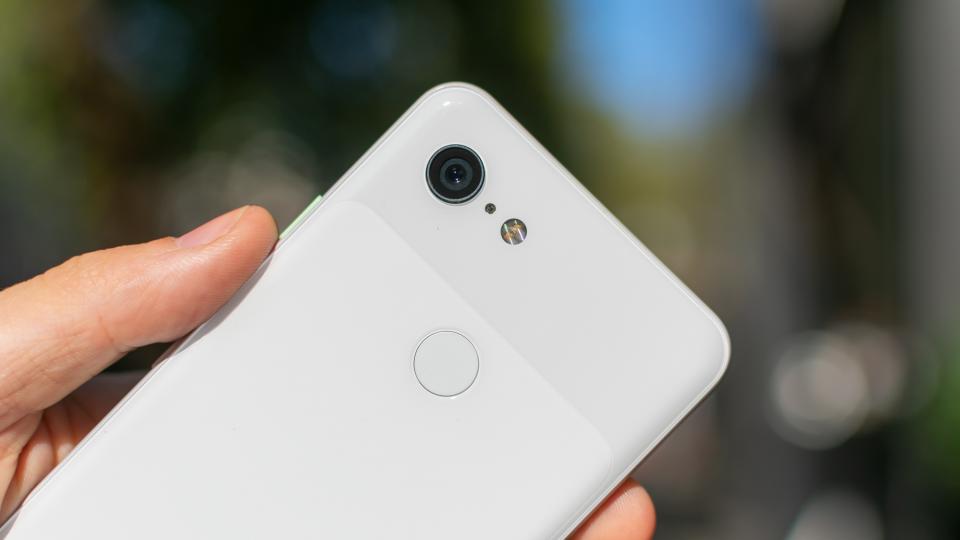 Call Screen is another handy new feature. Using Google Assistant, the phone notifies you of an incoming call and allows you to have Google’s AI butler pick up on your behalf. You receive a transcript while the conversation is going on and can also choose from a list of responses – as with the recent Gmail update on desktop.

Speaking of which, Gmail’s Smart Compose feature has arrived on Android. Limited to the Pixel 3 at the moment, simply start typing an email and Google will try to finish the sentence for you. It’s creepy but effective.

Elsewhere, you can flip the phone on its front to silence any sounds and notifications. Google Duplex, although not available in the UK yet, also allows Google Assistant to make restaurant reservations on your behalf – perfect for avoiding any awkward social encounters.

While other manufacturers are pushing out phones with dual-camera arrangements, and in some cases four, the Pixel 3 launches with only a single 12.2-megapixel rear camera. This might seem old hat, but Google has suggested that its HDR+ algorithms have improved, thanks to the slightly better image signal processor working on things behind the scenes. 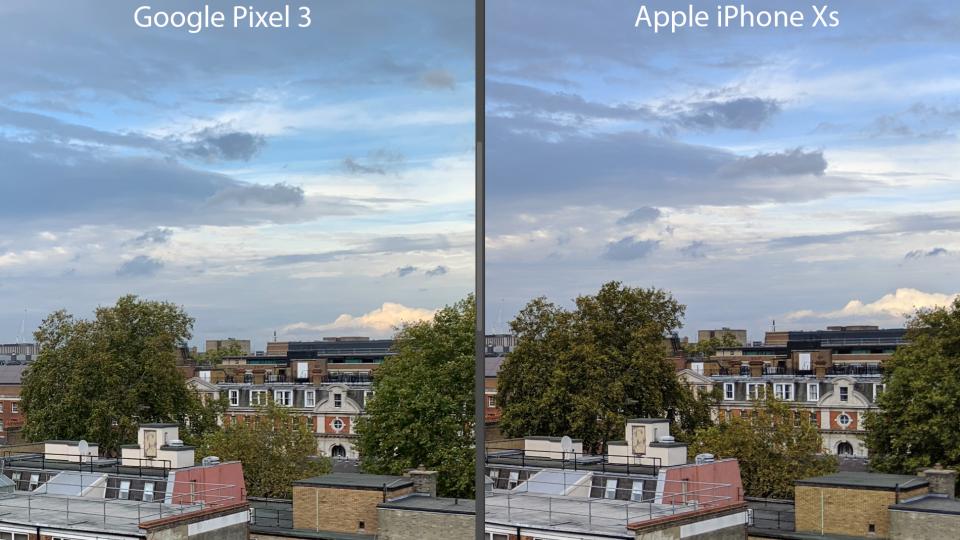 The Pixel 3’s camera is a cut above everything else, although it’s not quite the wide gap I was hoping for. The lack of a secondary telephoto lens really dampens the Pixel 3’s photographic versatility, and no support for 4K video recording at 60fps is a real shame. Nevertheless, Google’s algorithms make this a fantastic piece of kit for taking photos.

So, is the Pixel 3 precisely as expected? In short, yes it is, but even without the long list of leaks ahead of the launch, I would have reached a similar conclusion. Google is sticking to the same tried-and-tested release formula it’s conducted for the previous two years: slightly tweaking the core DNA, while offering a handful of mini-improvements, without radically altering the blueprint.

Don't miss a deal at Go Daddy
Best offers at H&R Block
Discounts, Sales and Deals at Microsoft Store
Save your money with TalkTalk Phone and Broadband
Online-Shopping with The Home Depot
Best products at Farfetch
Latest Posts