The Nest Mini is a great deal for your first smart home speaker and a simple solution if you want to extend the Google Assistant experience into other parts of your home. It lacks the musicality of the best-sounding Bluetooth speakers and you’ll need to subscribe to Spotify, Google Play Music or YouTube Music to get specific songs to play on-demand, but at this price these issues aren’t deal-breakers.

Whatever name it currently goes by, these multipurpose speakers serve as both a gateway to the smart home by way of Google Assistant and a solid speaker that can be controlled with your voice or through your phone with Bluetooth.

The finished result is an entry-level smart speaker that doesn’t have the same power or clarity of, say, the Apple HomePod, Amazon Echo Studio or Google Home Max, but its low cost and spectacular feature set makes it a great jumping off point for folks just getting into smart home voice control and automation.

When you do the math on how much goes into this speaker – the speakers, the microphones, the wireless receiver and on-board processor – it’s kind of amazing how cheap Google can sell this speaker for.

How much, if any of it, Google makes back in data collection and sales remains a subject of debate (Google has told some sites that data collected through queries may “inform your interests for ad personalization on Google services”) but it’s worth mentioning just so you’re aware of what’s possible.

Its affordable sticker price puts it in line with almost any budget Bluetooth speaker you’d buy on Amazon, and almost none of those can match the Nest Mini in terms of feature set. In fact, the only other speaker in remotely the same weight class as the Nest Mini is the Amazon Echo Dot – which also costs just $35 / £29 / AU$79.

We’ll cover the differences in performance and design below, but for now the main takeaway is that this is both one of the cheapest speakers and the cheapest brand-name smart speaker on the planet right now. 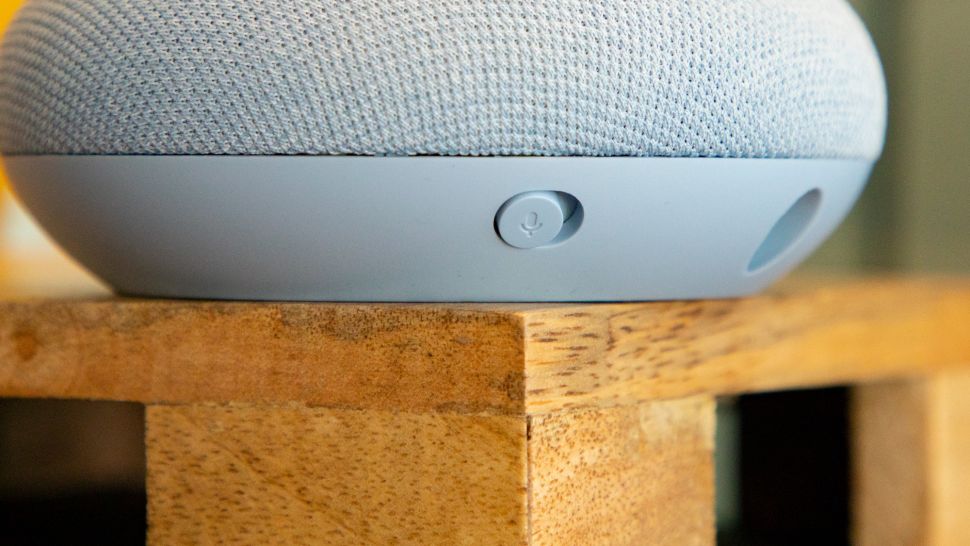 In spite of the Nest Mini’s affordable sticker price, there’s nothing about its design that alerts you that this is indeed a cheap speaker: The design is modern, clean and unobtrusive, especially if you buy it in a subtle color like Chalk (off-white) or Charcoal (grey-black). If you want to spice things up with the two more colorful options – Coral (pink-red) or Sky (light blue) – you can certainly do so, but those might not fit with everyone’s living room decor.

Regardless of which color you go for, the Nest Mini has a fabric mesh on top that covers three touch-capacitive buttons for raising and lowering the volume, and play/pause. On the underside you’ll find a rubberized base that compliments the fabric mesh and hides a microphone mute button on the back side near the power port. Last but not least, on the underside, you’ll find a place for a universal mount for easy hanging on a wall – a first for Google’s speakers.

What you won’t find anywhere on the Nest Mini is a 3.5mm line-out jack that could, in theory, connect to any other speaker or a line-in aux port that would allow you to connect your phone or MP3 player to boost your music. You’ll find the former on the Amazon Echo Dot (3rd Generation) that was released a year prior to the Nest Mini and the latter on last year’s new Amazon Echo. For neither one to be on the Nest Mini feels like a bit of a misstep.

The good news though is that the Nest Mini can connect to your smartphone via Bluetooth 5.0 so there’s always that option, too, if you need it. 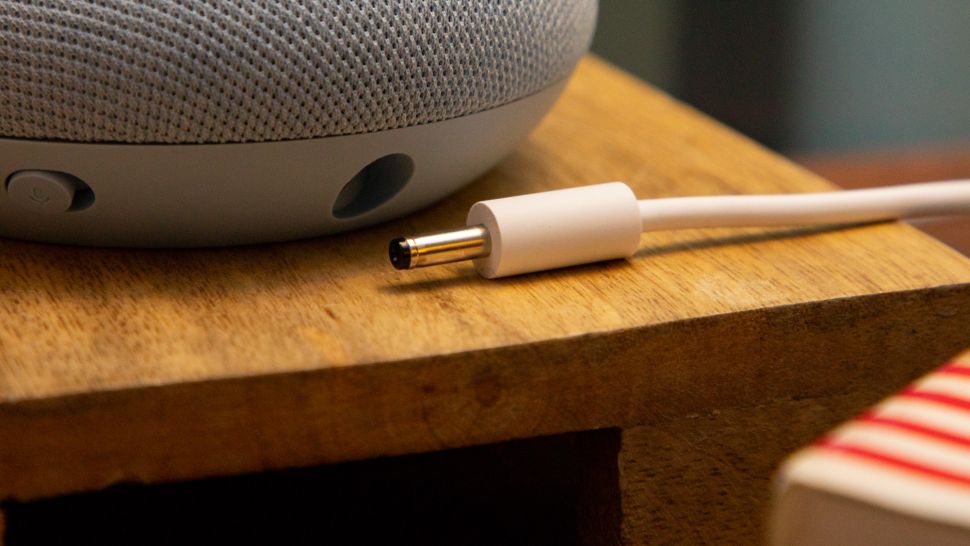 While the addition of Bluetooth is great (and, as you’ll see in a minute, desperately needed), the primary way of interfacing with the Google Nest Mini is, obviously, Google Assistant.

If you tried other virtual assistants like Siri, Alexa or Bixby in the past, or have tried Google Assistant on another Android device, you’ll know what to expect here – a solid assistant that can tap into your calendar to make appointments, set reminders and timers, control the music from popular streaming services, connect to some smart TVs and answer many – but not all – of the questions you can come up with on a day-to-day basis.

The experience of setting up and using Google Assistant has largely improved in the past three-and-a-half years since it launched, and really is as simple as downloading the Google Home app if you haven’t already, logging in using your email, and assigning it to a room.

Through the Google Home app you can setup multi-room groups that enable you to hear the same song across different speakers if you own more than one Google Assistant speaker, and control any smart devices you own if you’re too far away from the Nest Mini.

You’ll also be able to use the app to select which services the Nest Mini defaults to when you ask it to play music – which is pretty crucial. Your choices include Google Play Music, Spotify, YouTube Music, Deezer or Pandora, but getting the Nest Mini to play a specific song requires a subscription to one of the above services… which is kind of disappointing. The Google Nest Hub and Nest Hub Max can play YouTube Music songs on command without a subscription with ads, and it’s disappointing to find the same isn’t true for the Nest Mini.

The best workaround? Find a song on YouTube you want to listen to on your phone and then connect via Bluetooth to hear that song on the Nest Mini. 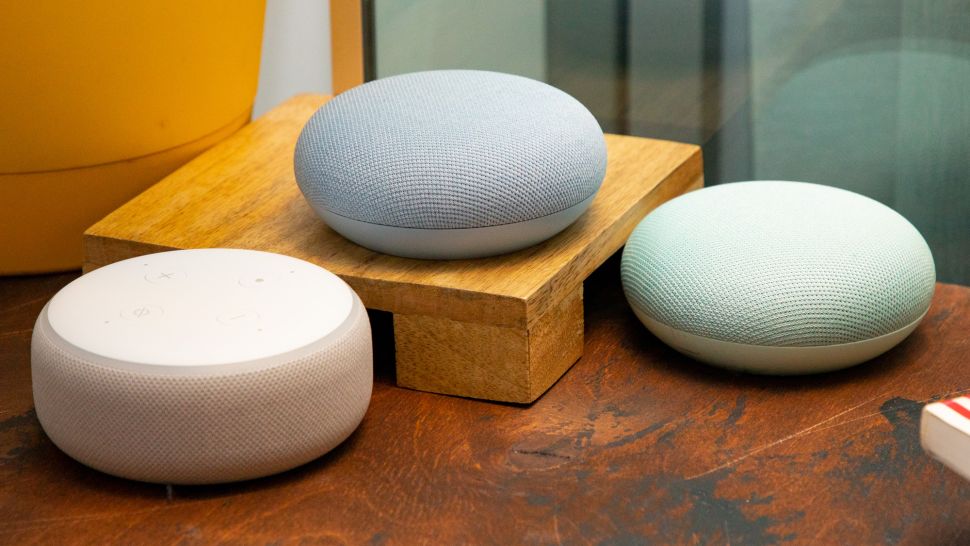 Music from the speaker is fairly middling – it has good clarity in the mid-range that’s perfect for speech reproduction, but it’s not very musical, especially in the high or bass ranges. It will absolutely surprise you by how loud it can get but the fatiguing treble and anemic bass don’t make for the best experience when listening to your favorite songs.

Because of the way it’s designed, you also won’t get any stereo separation when listening to the speaker – though, you will get 360-degree sound that allows you to put the speaker anywhere in the room, especially in smaller rooms like a home office. Admittedly, it’s not the best trade-off if you love music, but it’s one that Google needed to make for a speaker of this size and purpose.

The good news is that, if you’re coming from the original Google Home Mini, you’ll be hugely impressed with the improvements Google made with this speaker. To wit, the Nest Mini uses three speakers, one up over the Home Mini, and has twice the bass response as the original Home Mini. You still won’t hear stereo-channel separation but it’s still a big step up.

While music isn’t exactly the speaker’s strong suit, it really does nail the mid-range. That’s great if you’re trying to hear the daily news over the dull roar of kitchen conversation, and awesome for podcast fans who can never find a speaker that properly amplifies voices.

If you want to try and add back in that treble or bass response, you can attempt to do so through the Google Home app that we mentioned above, but don’t expect the Nest Mini to ever sound as good as its larger brethren the Google Home or Google Home Max. 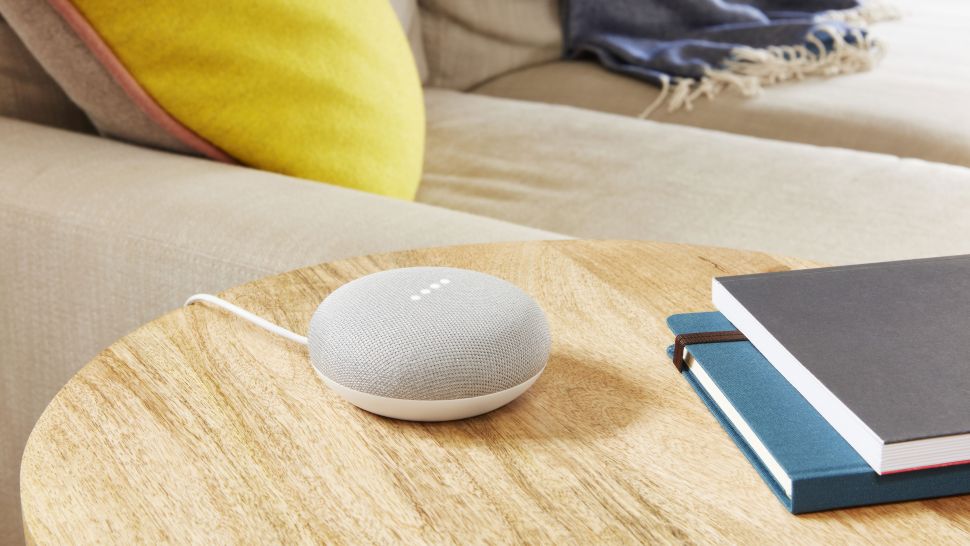 Don't miss a deal at Marks and Spencer
Best offers at House of Fraser
Discounts, Sales and Deals at Udemy
Save your money with H&R Block
Online-Shopping with Argos
Best products at Microsoft Store
Latest Posts