Google promises big things when it comes to the sound quality of the successor to the original Google Home smart speaker, but while it is an improvement, it doesn’t deliver the jump in performance we were hoping for. However, it does work very well as a smart speaker, thanks to the good microphones and clear voice output, and it’s certainly good enough for listening to background music.

The Nest Audio is the successor to Google’s first smart speaker, the Google Home, and a lot has happened in the smart speaker world in the four years since that product launched.

In that time we’ve seen several other speakers and smart displays from Google, a name change designed to integrate those products with the Nest branding, and – arguably most importantly – a slew of smart speakers from other brands featuring Google Assistant integration.

This means Google isn’t just releasing a new product that has to improve on the old model and fit into its existing lineup of products – the Google Nest Audio also has to compete will a whole host of similar products from brands like Harman Kardon, Sonos, LG, JBL and many more – and these are brands who know what they’re doing when it comes to home audio.

That’s probably one of the reasons why audio quality seems to be a big focus for Google with this product – so much so that it’s included ‘Audio’ in the new speaker’s name. That’s why it’s all the more disappointing that the sound quality doesn’t really live up to our expectations.

It sounds just fine with uncomplicated pop music, but other genres reveal a lack of detail in the treble and mids that make tracks lack sparkle and sound muffled.

On the plus side, the Google Nest Audio functions very well as a smart speaker – the assistant voice comes out loud and clear, and it picks up commands very well. It also has some handy features like Google Duo voice calling, which can help you keep in touch with family.

As a smart speaker, and as an extra Wi-Fi-connected speaker for the kitchen or another smaller room, the Google Nest Audio can do a pretty good job. However, if sound quality is important to you, it’s worth keeping in mind that you don’t have to spend very much more to get a speaker that will reward you with a superior listening experience.

The Google Nest Audio is available for pre-order now via the Google Store and a range of other retailers, and the release date is set for October 5 (October 15 in the UK).

It’ll set you back $99 / £89 / AU$149, and it’s available in two colors in Europe (Chalk and Charcoal), while US buyers will get to choose from three additional variants (Sage, Sand and Sky).

The price is slightly lower than the original launch price of the Google Home, but higher than the current price of that speaker (if you can still find one for sale). It’s also worth noting that you can get the Google Nest Hub for around the same price, and if sound quality isn’t your highest priority the Google Nest Mini is available for a lot less.

If, on the other hand, sound quality is the most important thing to you, it might be worth paying a bit more for something like a Sonos One or even Google’s own Home Max. 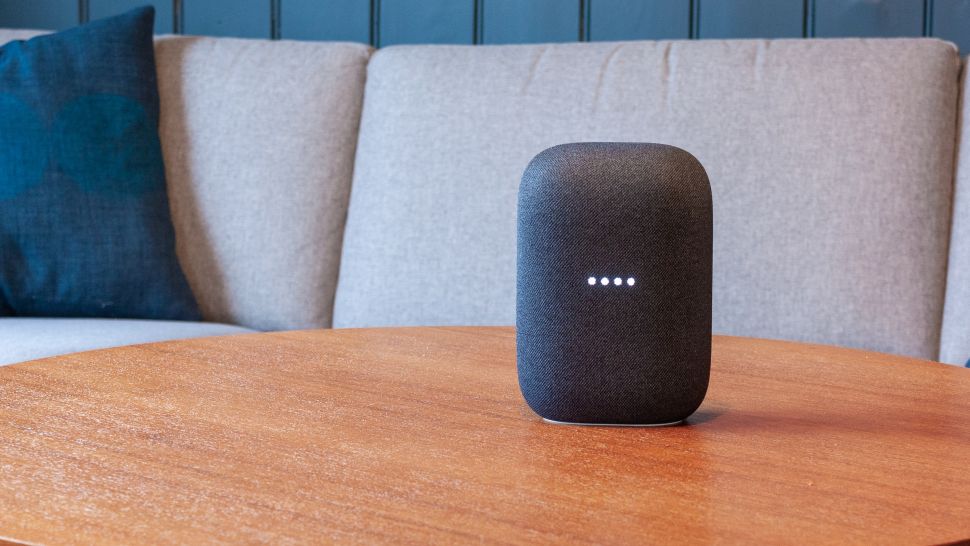 Unlike last year’s Nest Mini, which kept the design of the Home Mini that it replaced, Google has gone with a whole new design for the successor to Google Home.

This time the whole unit is covered in a fabric grille, keeping in line with the rest of Google’s smart speakers. This simple design – as opposed to the air freshener-esque Google Home – works well for the smaller Nest Audio, but it makes this larger speaker look like something of a featureless blob on your table when it’s not in use. One the other hand it is very discreet, so should blend in well with most decor.

It’s also worth noting that the new Nest Audio is made of 70%t recycled materials, and each unit will, according to Google keep, 1.2 500ml plastic bottles out of landfills, which is obviously a good thing.

Even though nothing about the design suggests it, there are actually three distinct touch surfaces on the top of the speaker, and from left to right these let you lower the volume, stop and start playback, and turn the volume up.

The only physical control on the speaker is the switch on the back that lets you mute the microphone, to ensure that your Nest Audio isn’t listening to you when you don’t want it to.

Apart from that there are the four signature LEDs on the front that light up when you interact with Google Assistant, and that’s about it. 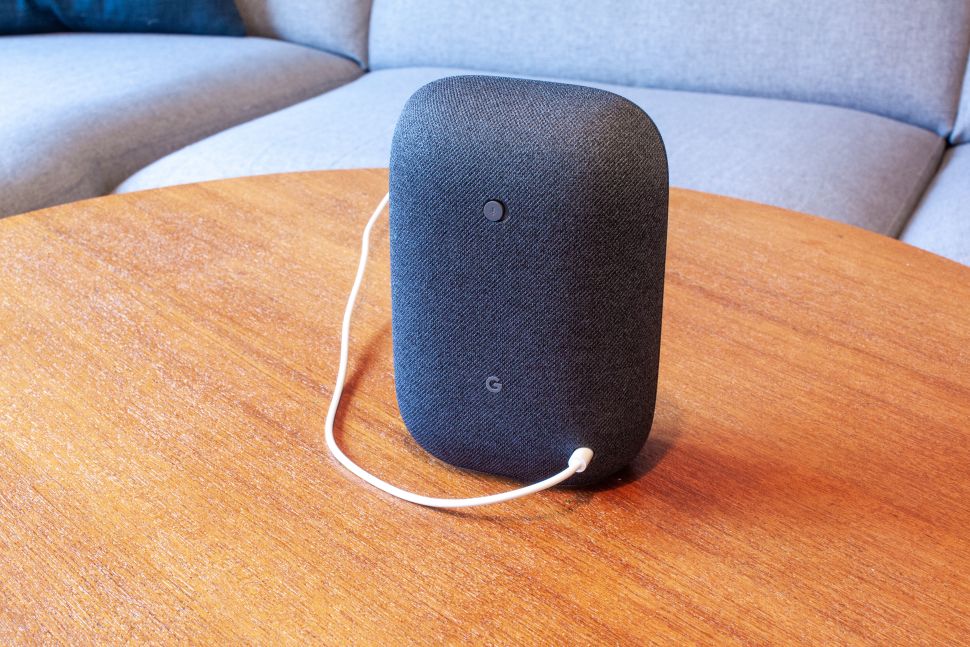 As mentioned, audio quality looks to be a major focus for Google with the Nest Audio. According to Google, its new speaker is 75% louder, and has 50% more bass, than the Google Home. That may be true, but we still can’t say it offers the upgrade in sound quality we were hoping for.

To be fair, the Nest Audio does sound pretty good when listening to uncomplicated pop music like Dagny’s Somebody or The Weeknd’s Blinding Lights. Such tracks are reproduced fairly well, and the bass is definitely present, providing a solid foundation without being overwhelming.

However, it’s worth noting that a quick comparison to the small and portable JBL Flip 5 reveals that the latter can deliver significantly lower frequencies, and we can’t see why Google couldn’t have managed to bring more bottom end out of its new speaker.

More intricate tunes prove more of a challenge for the speaker, and the surprising thing is that it’s not really the bass that disappoints – it’s more that the treble is missing some of the sparkle we’d hope for, and it means the soundstage is a little muffled.

At the same time the high mids are also missing some detail, and when listening to a classic like Fleetwood Mac’s Rhiannon, the vocals aren’t quite given the focus they deserve, while some of the space and detail is drowned out by the booming lower mids.

The missing treble can be restored somewhat by cranking up that setting in the Google Home App, but there’s no adjustment for mids, so you can’t do much about the lack of detail.

Turning up the volume also shifts the balance somewhat towards more treble, but this also introduces another issue, with the sound becoming harsh and grainy. We found this particularly noticeable when listening to Björk’s Army of Me, with the vocals having an unpleasant ring to them that really shouldn’t be there.

To be clear, the sound quality overall isn’t terrible, and the Nest Audio can give you an enjoyable listening experience at moderate volume levels – just remember that you don’t have to pay very much more for a speaker that can deliver much more bass, detail, and sparkly treble without any harshness.

However, as a smart speaker the Nest Audio works very well. The voice assistant comes out loud and clear, and can be easily heard even when you’re not close to the speaker. The three microphones also did a good job of picking up our voice, amid both loud music and other noise in the room. 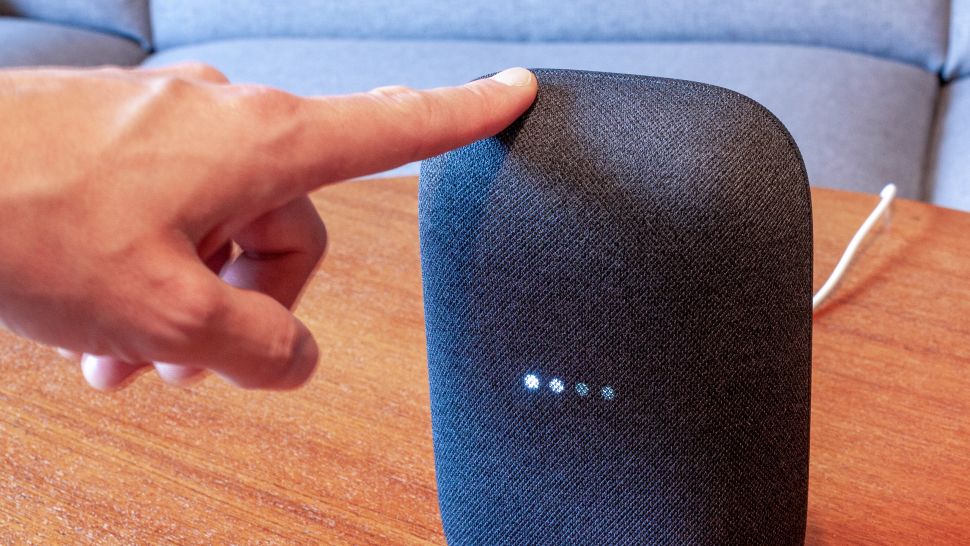 Setup of your Google Nest Audio is done through the Google Home app, and the process of connecting to your Wi-Fi and configuring your Google Assistant settings is quick and simple. From there you’re ready to start giving commands, asking questions and playing music, and if you’ve used a smart assistant before this all works exactly as you’d expect.

Via the Google Home App you can assign the speaker to a specific room in your home (handy if you’re keen on setting up a multi room audio system), set up filters for content, and active night mode. It’s also possible to combine two Nest Audio units in a stereo pair – configurations with other Nest speakers are possible, but limited to mono sound, though the ability to add the Nest Audio to a multi room setup is a cool touch.

Another feature that’s supported is the ability to call the speaker from your phone or vice versa through Google Duo. You can use this, for example, to call and check on the kids while you’re out, and they can also get hold of you easily by just asking the speaker to call you.

The Google Nest Audio has an automatic EQ feature that tunes the speaker depending on the ambient sound, and adjusts the sound depending one whether you’re listening to music or speech in podcasts, although since this all happens automatically and in the background it’s hard to tell exactly what’s being adjusted, and how. And – returning to our issues with the sound quality, it doesn’t necessarily improve the music listening experience all that much, but voices do at least sound clear and loud.

Should I buy the Google Nest Audio?

You want a simple and compact smart speaker

The Nest Audio is a space-saving and unassuming smart speaker that will fit anywhere.

You want a smart speaker for the kitchen or the bedroom

The Nest Audio is good enough for the kitchen or a bedroom, but it doesn’t deliver enough volume to fill a bigger space.

You want a capable smart speaker

While the sound quality when listening to music isn’t the best, the Nest Audio works very well as a smart speaker with clear voice output and good microphones.

The sound quality of the Nest Audio is perfectly adequate for listening to pop music in the background, but if you’re picky about having your favorite tunes reproduced faithfully you may be disappointed by the lack of detail.

You want sound that fills a big room

The Nest Audio is not built to fill a big space with music, and if you try to compensate by cracking up the volume tunes can quickly start to sound harsh.

The Nest Audio doesn’t look bad by any means, but it’s unassuming looks means that anyone looking for something a little more striking will want to look elsewhere.

Don't miss a deal at Currys
Best offers at H&R Block
Discounts, Sales and Deals at Boohoo
Save your money with Microsoft Store
Online-Shopping with Go Daddy
Best products at Mobiles
Latest Posts