A loaded and forward-thinking motherboard, but not one that fully justifies its high price

It’s a grand old tradition for major CPU releases to be accompanied by new motherboard chipsets, and while AMD’s 3rd-gen Ryzen processors are maintaining this routine, they’re doing so on a much smaller scale than usual. This time, there’s only one new chipset at launch, the high-end X570.

This is, it should be said, quite a big deal. X570 is the first chipset from AMD or Intel to support PCI-E 4.0. On all recent motherboards, the default version of PCI-E – the interface that allows individual components to communicate with the motherboard – was 3.0. PCI-E 4.0 has double the bandwidth, which on X570 motherboards is made available to graphics cards, SSDs, Wi-Fi cards and anything else that connects via the PCI-E slots.

The extent to which different motherboard models support PCI-E 4.0 will vary, as it will be cheaper to include slots running the 3.0 interface. The X570 Aorus Master, however, takes no such short cuts: with a 3rd-gen Ryzen CPU installed, all of its three PCI-E x16 slots, all of its three M.2 slots and its single PCI-E x1 slot are capable of 4.0 speeds. 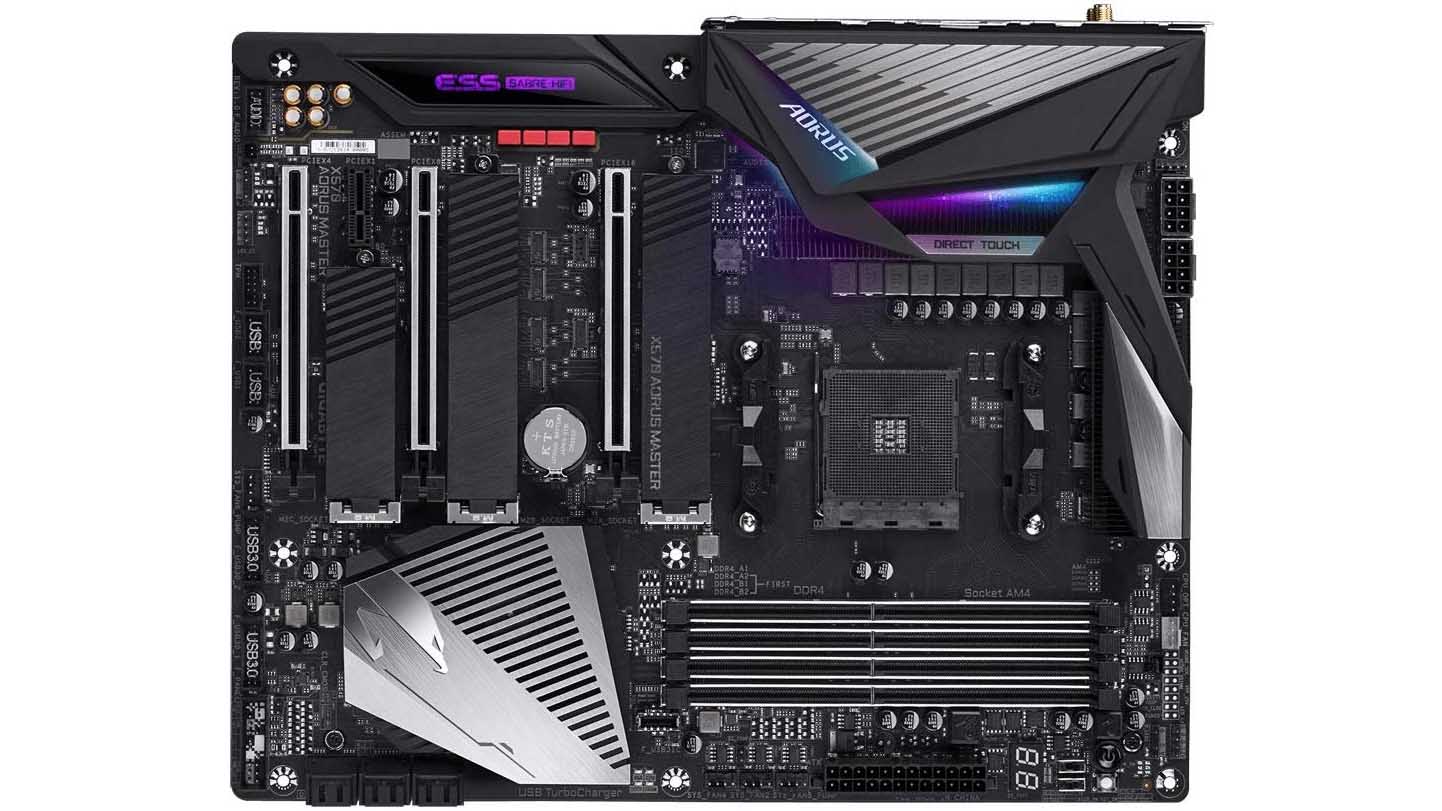 It would be hard to expect anything less when the X570 Aorus Master is more than twice as expensive as the most affordable X570 motherboards, like the Asus Prime X570-P and the MSI X570-A Pro. These only have some of their slots equipped with PCI-E 4.0, however, so Gigabyte’s model is clearly lining itself up as an option for enthusiasts looking to stuff their systems with the latest hardware.

The X570 Aorus Master is certainly happy to accommodate. Three M.2 slots is the most you’ll get on any motherboard, and although there’s only one PCI-E x1 slot, any expansion cards that would fit it could also be placed in one of the many PCI-E x16 slots. As is common, only the topmost slot runs at full x16 speeds, but unlike on X470 boards you can populate all three and never have any of them drop below x8.

The four RAM slots are also perfectly sufficient, especially as they can enable memory overclocks up to a sweltering 4,400MHz, and the X570 Aorus Master is fairly well equipped for cooling too. We counted a healthy seven four-pin cooling headers, spaced sensibly around the edges. There are also both 5V and 12V headers for addressable RGB components, be it an all-in-one watercooler or just some strip lights. 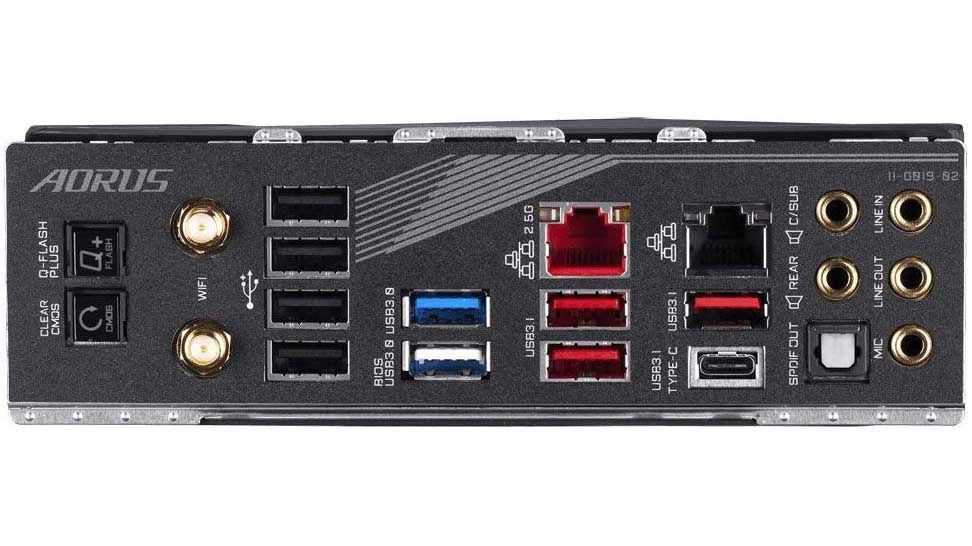 Regular tweakers will also appreciate the onboard power and reset buttons, dual BIOS function (and integrated switches) and the two-digit POST code display, which can be vitally useful when trying to troubleshoot booting and crashing issues. There’s also a second eight-pin power connector, which is optional to use but can help deliver extra power when attempting intense overclocks.

The BIOS, too, is geared specifically towards experienced users. There is an Easy mode, but it lacks one-click overclocking features – which is fine, as we find they hardly ever work well – so Advanced mode is the focus. There’s a dizzying number of settings to fine-tune, which will again please enthusiasts, but it’s all quite easy to use, thanks to a practical tab-based layout.

It took no time at all to apply various adjustments to our Ryzen 9 3900X processor, although nothing ended up particularly stable. We’re sure that’s down to the chip, however, not some killer flaw in the X570 Aorus Master and how it regulates power.

External connectivity is another strong point. There’s a wealth of full-size USB ports, comprising four USB2, two USB3 and three USB3.1 ports, along with a reversible USB Type-C connector. The lack of video output isn’t really an issue, as most Ryzen chips don’t have integrated graphics anyway, and audio is well covered with an optical S/PDIF port, rear speaker and C/SUB jacks alongside the standard mic, line in and line out jacks.

Best of all is networking. This is a dual-LAN motherboard with one Gigabit Ethernet port and a faster, 2.5Gbit port, and there’s also built-in 802.11ax Wi-Fi. This Wi-Fi standard isn’t widespread yet, but as with PCI-E 4.0 support, it’s a nice bit of futureproofing.

Overall, the X570 Aorus Master is an incredibly well-equipped motherboard that takes full advantage of what its gleaming new chipset can do. You might, therefore, be wondering why it’s only got three stars.

For starters, its costliness can only be partly explained by its positioning towards enthusiasts. Other than its slightly better I/O panel, there’s not much that the X570 Aorus Master does that the ASRock X570 Taichi can’t as well, and that costs £297.

As exciting as the possibilities are with PCI-E 4.0, there’s also the matter of it still being in the early stages. Right now, the closest thing to a must-have PCI-E 4.0 device is an SSD, and while by all accounts these are extremely fast, they’re also vastly more expensive than NVMe SSDs on the 3.0 interface.

The futureproofing argument can be a good one, but we’d still recommend either a cheaper X570 motherboard, or waiting until having a system full of PCI 4.0 hardware is truly worth the expense.

Don't miss a deal at House of Fraser
Best offers at Virgin Media
Discounts, Sales and Deals at Udemy
Save your money with Farfetch
Online-Shopping with H&R Block
Best products at Go Daddy
Latest Posts