EZVIZ, best known for its home security cameras, now has a mid-range wired video doorbell. The EZVIZ DB1 doesn’t have a top-shelf feature set, but its $150 street price will garner attention, and it has a unique feature—a microSD card slot—we’d like to see other manufacturers copy. Several other aspects of this video doorbell, however, leave us significantly less enthused.

The DB1 is bulkier than many other video doorbells we’ve evaluated lately. The oversized camera lens in the middle ensures no one will mistake it for anything other than a surveillance device, even if the equally large button at the bottom makes it clear what visitors should push to announce their arrival on your doorstep.

Installing the doorbell is a relatively straightforward process. The DB1 depends on your home having existing low-voltage wiring from an existing doorbell, and there’s small power-adapter in the box. You’ll mount the power kit in your in your doorbell chime, connect the DB1 to the wires that powered your old doorbell, and use the EZVIZ app to finish setup.

I found installation to be seamless, except for one major issue: I could never get the DB1 to work with my mechanical chime, even after troubleshooting and rewiring to test. EZVIZ lists compatible mechanical and digital chimes on its website, so I’d encourage prospective buyers to check this before purchasing the DB1 (scroll down to the middle of the page).

You should also note the curious comment on that same page that reads “For the first time use, please power on the doorbell and wait for 3 hours before using it, or else the chime in your home may not work.” I’m not aware of any other video doorbell with such a caveat.

On the plus side of the installation column, EZVIZ provides faceplates in three colors and three angled three mounting plates to accommodate installation on both flat and angled surfaces. The latter are very useful if you’re mounting the doorbell on clapboard or other non-flat siding, or if your door trim is at an angle that would result in the camera pointing in the wrong direction.

You should decide how you want to store video recordings before you install the DB1. Unlike most of its competitors, EZVIZ includes a microSD card lot on the camera. You’ll need to provide the memory card—it can be up to 128GB in capacity—and insert it into the card slot before you mount the faceplate. Local storage is a stand-out feature that gives you the option of forgoing EZVIZ’s paid subscription service for cloud storage, although you should remember that if someone manages to steal the doorbell, all evidence of the crime will go with the device without it. 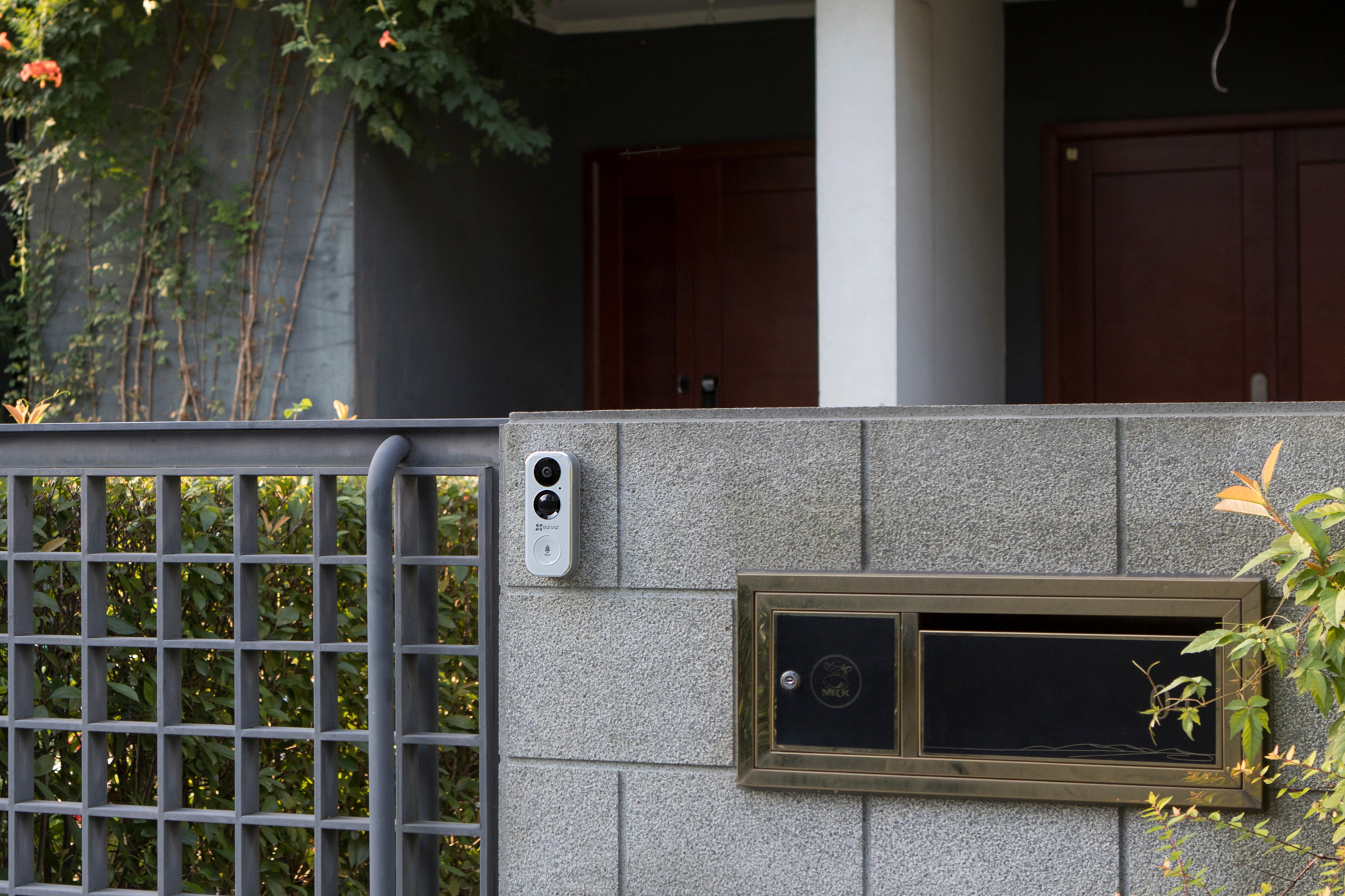 The EZVIZ app has a couple of quirks that I found to be annoying: First, the app sounds a beep every time it detects motion within its field of view. Coupled with the limited customization options for the camera’s motion-detection zones—you can choose between three arc-shaped distances—and its inability to discern between people, animals, and tree branches swaying in the breeze, the beeping quickly drove me bonkers. It took some time searching and drilling down through the app’s options before I discovered how to turn that option off.

The app will also override whatever else you’re doing on your smartphone when someone rings the doorbell. And there’s no way to disable that feature short of disabling the answering functionality altogether or setting a specific schedule of when you want—and don’t want—the DB1 to send you alert notifications.

The thumbnails for recorded footage, however, are excellent: You can see exactly what set the DB1 off without needing to watch the full video—unless you want to.

The DB1 is outfitted with a 3MP camera that delivers video resolution of 2048 x 1536 pixels, and its picture quality is very good. Its passive infrared night vision is also very clear and sharp. Unlike many of its competitors, the DB1 supports both 2.4- and 5GHz Wi-Fi networks—that’s a significant advantage in environments where the 2.4GHz frequency spectrum is overcrowded with other clients.

Two-way communication worked relatively well, although there was a consistent two- to three-second delay in the feed between the doorbell and the app. The DB1 supports both Alexa and Google Home, but only to watch a live feed from the camera. There’s no option to answer the door with your smart display or to saved clips. EZVIZ supports IFTTT for enthusiasts of that smart home platform.

A hit and miss video doorbell

The DB1 is a serviceable and inexpensive video doorbell. The local storage option—via a user-provided microSD card—is a great feature, and its camera resolution and night vision are excellent. But its bare-bones motion sensing leads to lot of undesired notifications, its pricey per-camera cloud-storage plan, and the fact that I could never get it to work with my existing mechanical chime prevents me from recommending it more enthusiastically.

A middling video doorbell with one big advantage: local storage for its video recordings.