Ecobee SmartCamera review: If you can tolerate a subscription, this security cam has more features than most

Ecobee builds our absolute favorite smart thermostat, and its new SmartCamera with voice-control security camera is just as innovative. But this is a super-competitive space, and Ecobee doesn’t bring quite enough to the table to justify this camera’s $179 price tag (and not-so-optional subscription).

This camera can also act as the hub of a broader home security system, however, so we’ll publish a separate review of that entire ecosystem soon. This story focuses on the SmartCamera’s abilities as a home security camera and an Alexa smart speaker.

The Ecobee SmartCamera isn’t the only security camera to integrate Alexa. The Honeywell Home Smart Security Camera from Resideo does the same trick, and that device has been on the market since late 2018 (we reviewed it as part of Resideo’s home security bundle). Ecobee’s camera is much better than Resideo’s, but it also costs almost $100 more than Resideo’s camera by itself. 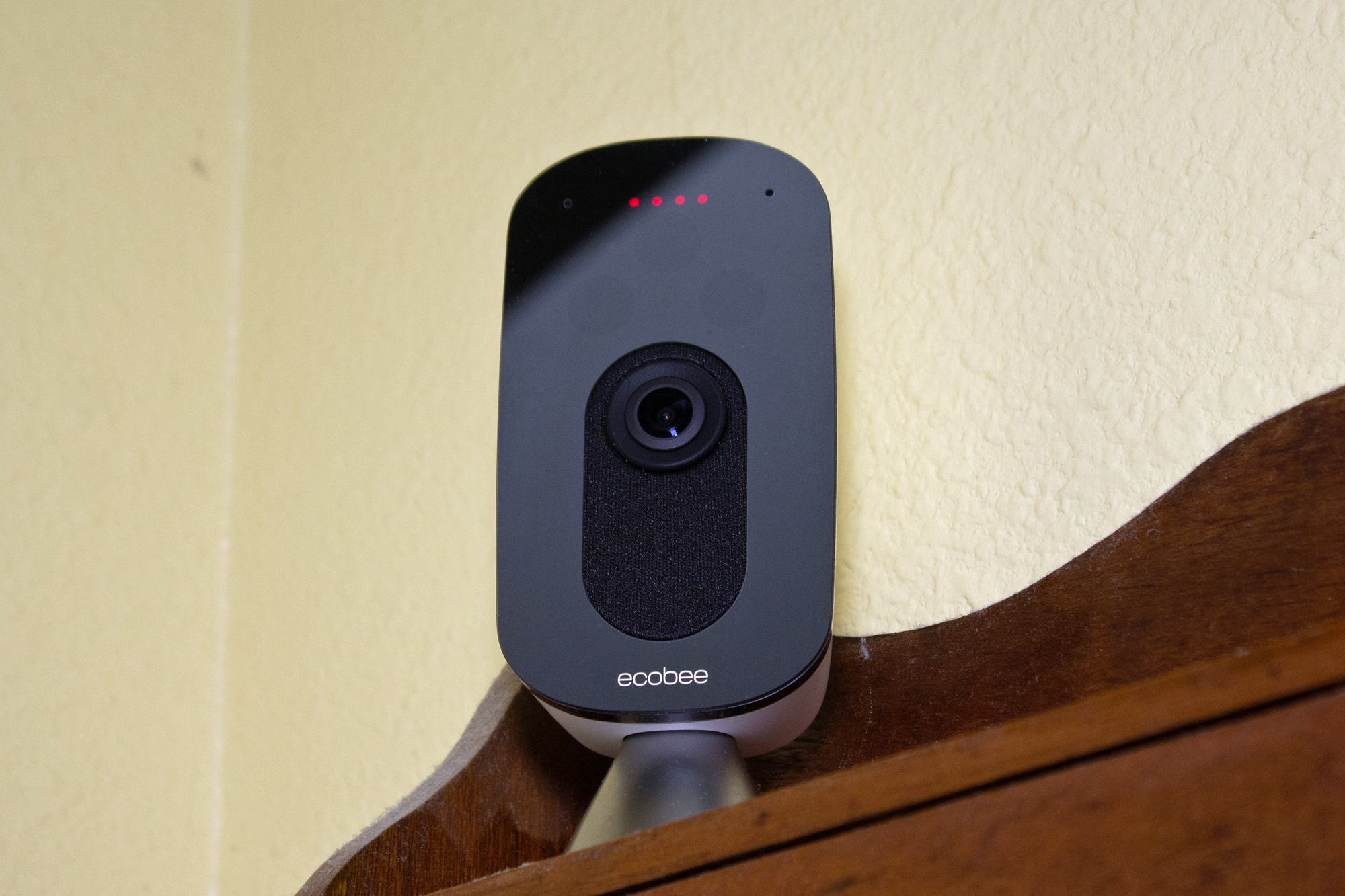 The Ecobee SmartCamera isn’t the only security camera to integrate Alexa. The Honeywell Home Smart Security Camera from Resideo does the same trick, and that device has been on the market since late 2018 (we reviewed it as part of Resideo’s home security bundle). Ecobee’s camera is much better than Resideo’s, but it also costs almost $100 more than Resideo’s camera by itself.

The Ecobee SmartCamera has a dual-band 802.11ac Wi-Fi adapter onboard, plus a Bluetooth 5.0 radio for making the initial connection to your mobile device (there are apps for Android and iOS). The camera was very easy to set up. There’s an 8-core CPU onboard running at 2GHz, 1GB of LDDR4 RAM, and 4GB of flash memory (none of which is used for onboard video storage. More on that in a bit.) The camera can be tilted forward or back on its weighted, one-inch-high conical stand for placement on a flat surface, or you can mount the stand and camera to the wall.

If you don’t pay for Ecobee’s Haven smart home service, which costs $5 per month ($10 per month if you want it for more than one camera), the Ecobee SmartCamera is strictly a live-view device. It won’t record video at all, it has no local storage, and you won’t receive motion-detection alerts without a subscription.

In that sense, as is the case with Ring’s video doorbells and security cameras, a Haven subscription isn’t really all that optional. Ring’s $10-per-month service plan, on the other hand, includes twice as much storage (30 days versus 14 from Ecobee), and you get professional monitoring if you also purchase its Ring Alarm product. I’ll compare Ecobee’s full home security offering, and contrast it with Ring’s, in a separate review.

Without the Haven service, you can view a live stream from the camera, but you can’t record that video or take a snapshot of it (unless you use other software to take a screengrab of the app), and there is no history of events that you can look back to. Despite all that, the camera is not without its charms, especially when viewed from a privacy angle. 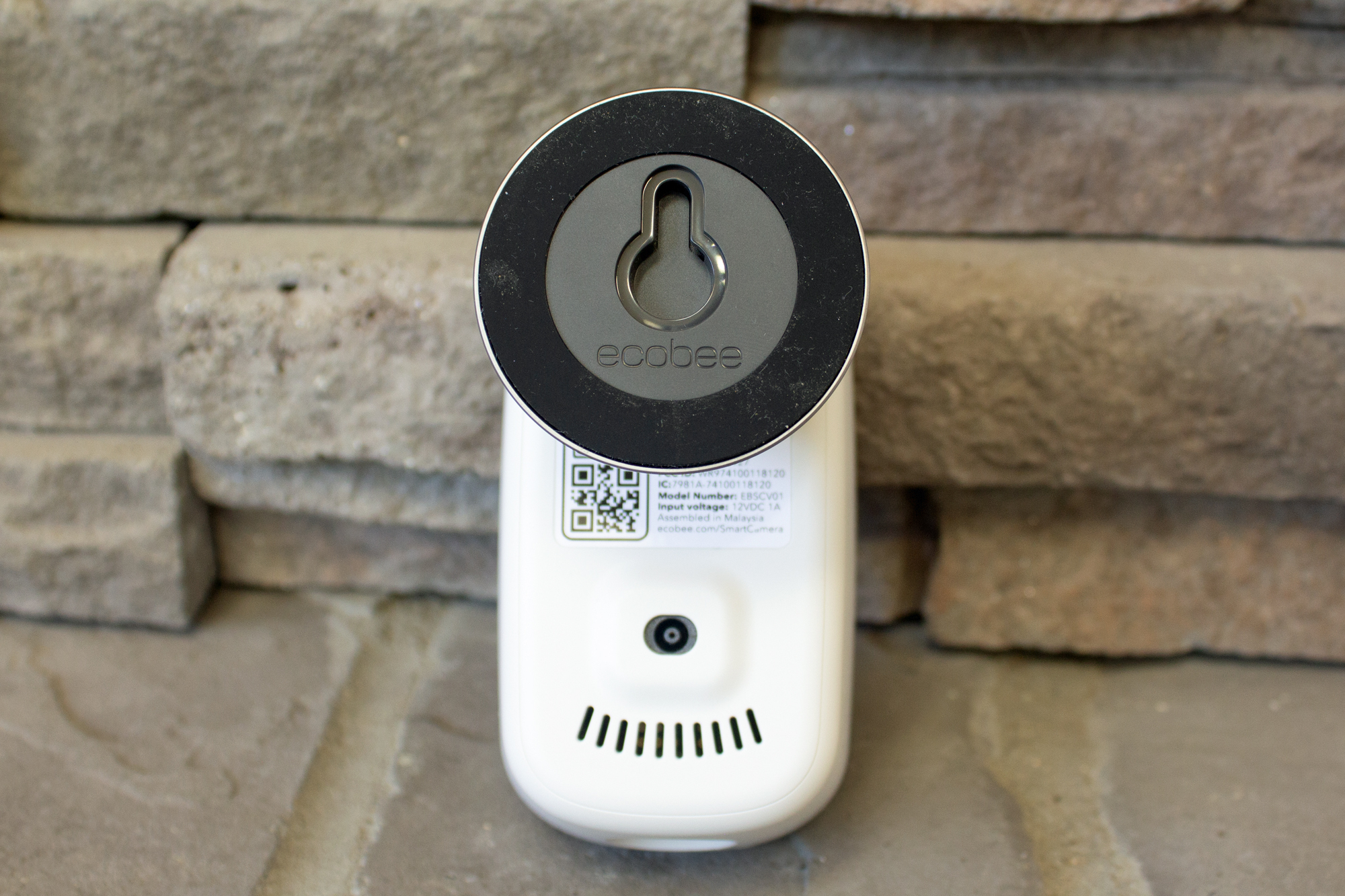 Two-factor identification is mandatory from the get-go, for example, and when you turn on the camera’s Autopilot feature, Ecobee’s app will use your phone’s physical location to automatically turn the camera on when you leave your home and off when you return. This geofencing feature works best when everyone in the household has a smartphone with the Ecobee app installed: Autopilot won’t activate until everyone leaves. That way, you never need to worry about doing something embarrassing in front of the camera. You can also turn on the camera manually, whether you’re home or not, and it will stay on until you turn it off or Autopilot detects that you’ve left the home and come back again. 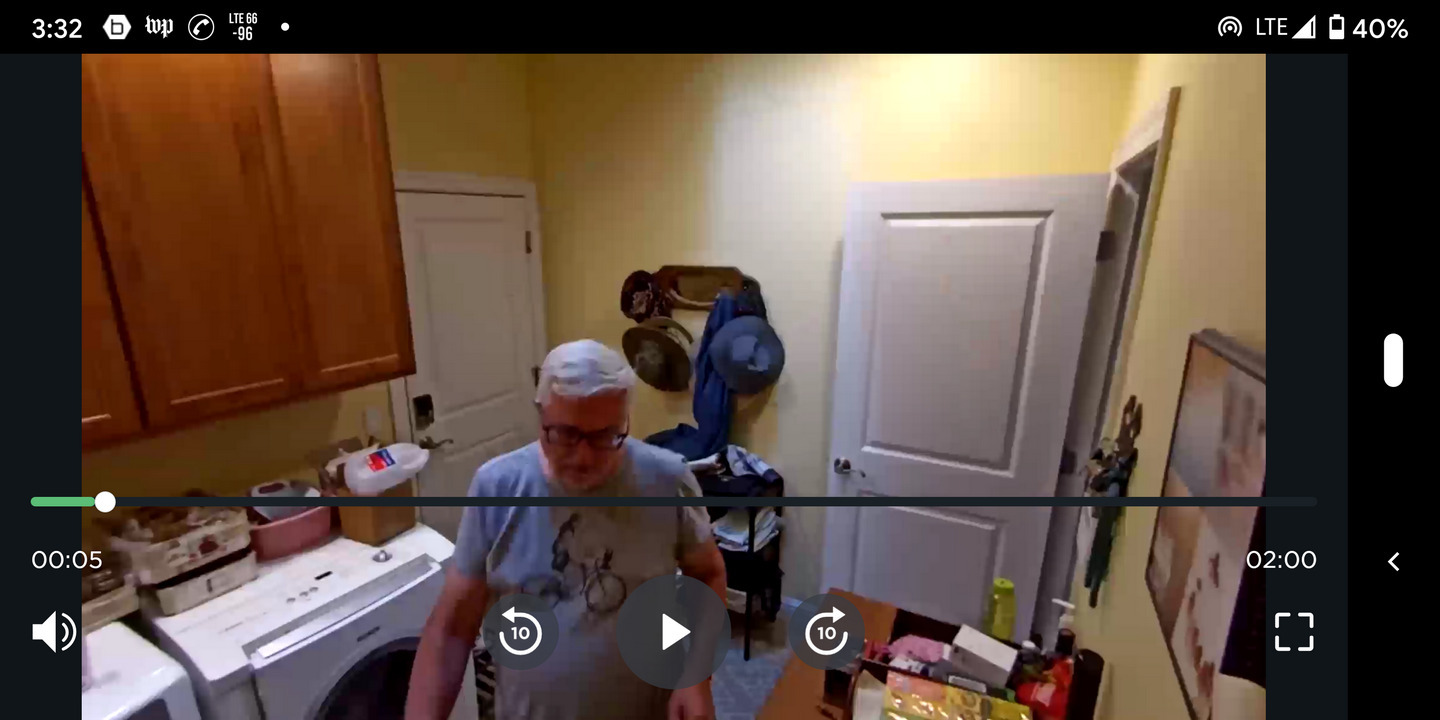 The Ecobee SmartCamera’s 1080p video is very crisp, and it has a slick tracking feature that automatically zooms in on any person who enters its broad field of view: 180 degrees diagonal, 170 degrees horizontal, and 115 degrees vertical. The camera will then track that person as they move around the room. There is no pan/tilt motor onboard, so this is accomplished digitally and inside the camera (not in the cloud). You can similarly pan, tilt, and zoom the camera’s focus while viewing a live stream by tapping a directional pad in the app.

Night vision is enabled by a trio of 850nm infrared LEDs. These can be disabled in the app so they don’t reflect off a window should you decide to position the camera there to monitor an outdoor space (it is not weatherized and cannot be installed outdoors). The camera’s night vision images are crisp and clear.

Audio is streamed along with video, and two-way audio is supported so you can have a conversation with the person in front of the camera (or yell at them if it’s an intruder). Speaking of intruders, the camera has an onboard siren, but it can only be activated manually by pressing a button in the app, and it’s not at all loud—just 76dB. 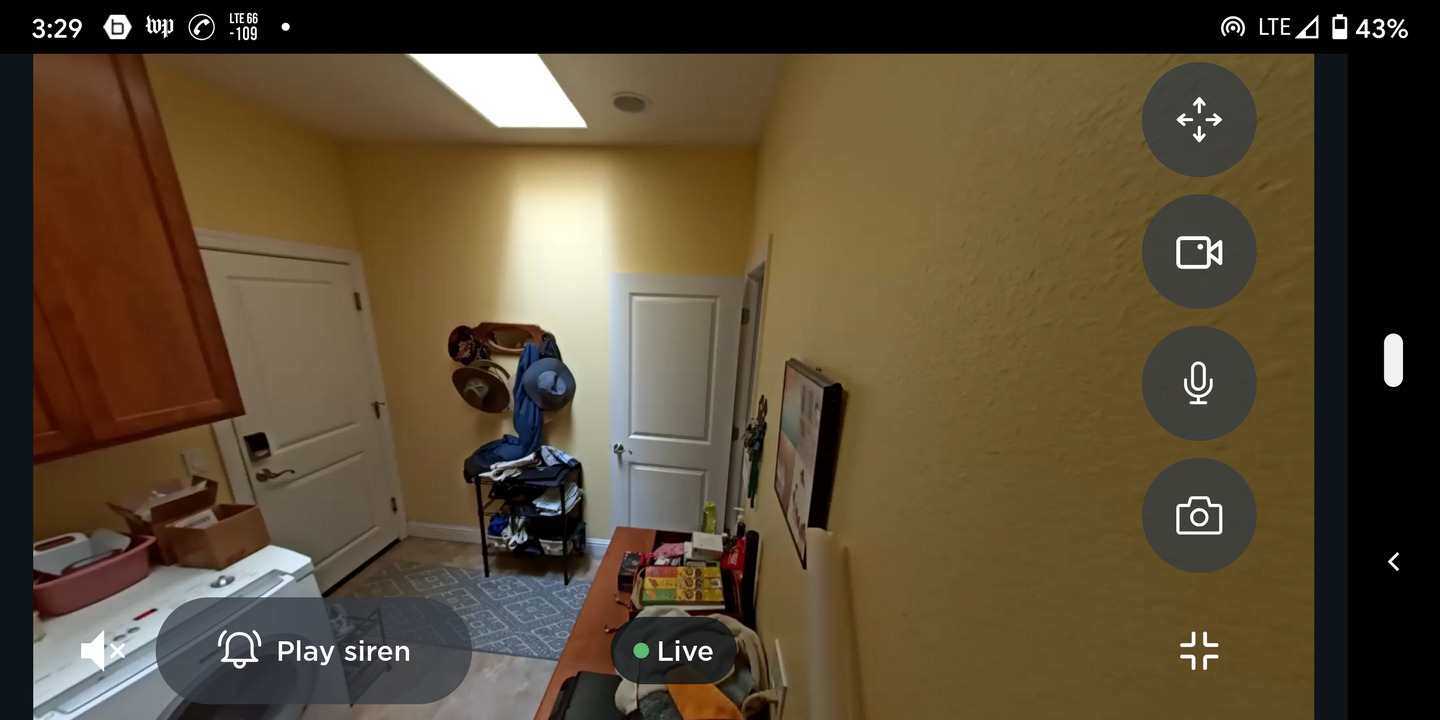 The siren would be much more useful as a deterrent if it could be set to go off when you’re out of the house and the camera’s motion sensor is triggered. This shortcoming becomes even more glaring when you consider the broader home-security possibilities available within the Ecobee ecosystem.

As a smart speaker, the Ecobee SmartCamera is almost as effective as an Echo Dot: It dutifully responds to its wake word (there are also touch-sensitive buttons on top for summoning the digital assistant and muting the camera’s mics), and it can execute nearly all the skills of any other Alexa device. I was able to use it to control all aspects of my Vivint Smart Home system (turning lights on and off, opening and closing motorized shades, arming its security feature, and so on).

Saying “Alexa, I’m hot” resulted in the Ecobee smart thermostat reducing its target temperature by two degrees, so the air conditioner fired up. You can also get news and weather updates, have the camera play music from linked services (from Amazon Music, at least; the camera won’t play music on Spotify), and more. It’s relatively weak as an music speaker—bass response is nearly nonexistent—but no one buys a security camera for its sonic charms.

It bears repeating: Ecobee makes a wicked-good smart thermostat—one that doesn’t require an “optional” subscription to get the most benefit. The Ecobee SmartCamera has some really great features, too, but a security camera that can’t preserve forensic evidence of a crime—unless you’re willing to pay a monthly fee—just isn’t a good home security value. A security camera with a built-in siren is a great idea, too, but it won’t be very effective at deterring an intruder if it only operates when you push a button on your smartphone.

Ecobee does get a thumbs-up for its privacy considerations: The Autopilot feature that turns the camera off when you’re home, and on when you leave, is an excellent feature. Integrating an Alexa-powered smart speaker was a good decision, too. But there are so many security cameras that are better than this one, even if they aren’t also smart speakers.

The Ecobee SmartCamera isn’t a top-shelf security camera, but it does have some great attributes—including Alexa integration. But you’ll need a subscription to unlock the most useful features related to its core function.

Previous ArticleLinux malware could soon be a thing of the past
Next ArticleRussound MBX-PRE review: Yes, Virginia, there really were multi-room audio systems before Sonos
Comments (0)