Lighter and smaller with a handful of new features, the Osmo Mobile 3 is DJI’s best smartphone gimbal yet

If you’re in the market for such a bit of kit, then DJI’s third-generation stabiliser has recently hit the shelves. Cheaper than ever, and benefiting from a smattering of new features including an improved foldable design, the Osmo Mobile 3 could be just the ticket for budding amateur videographers.

DJI Osmo Mobile 3 review: What you need to know

Like last year’s model, the Osmo Mobile 3 uses a triple-axis gimbal in tandem with special onboard tech to help detect and compensate for your phone’s movements. Pair it with the DJI Mimo app via Bluetooth and you can capture rock-steady video and other content such as panorama, timelapse and hyperlapse footage without ever having to touch the screen. 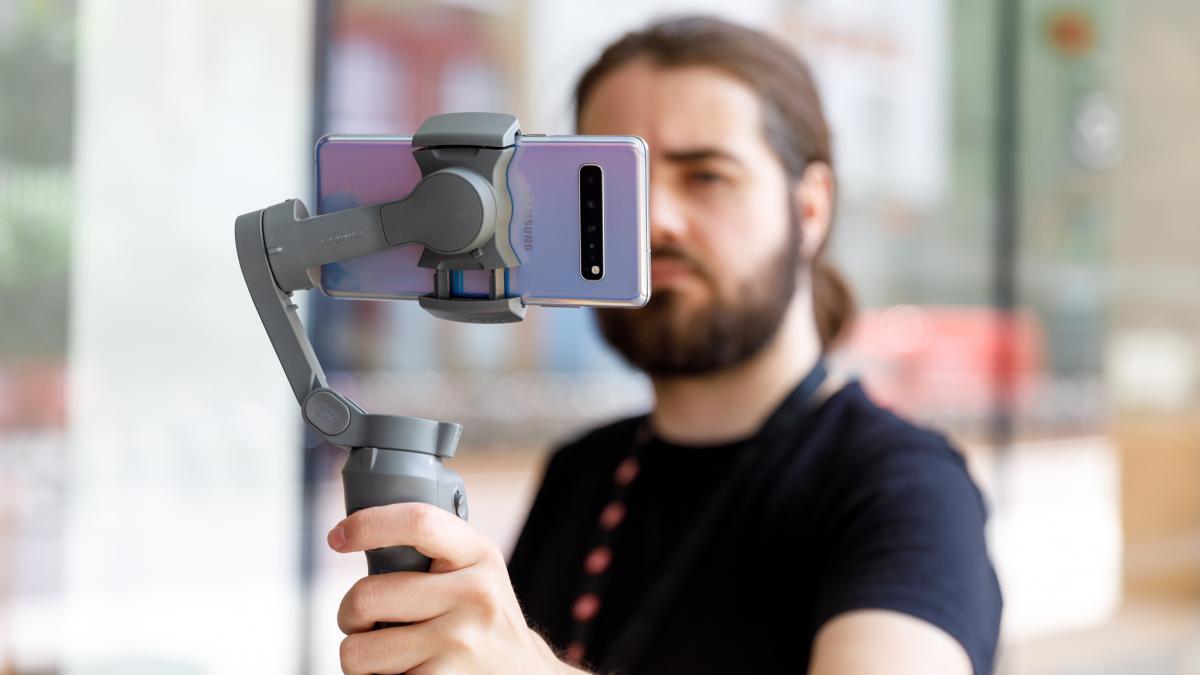 The third-gen gimbal introduces a new foldable design, allowing it to be packed away quite neatly in its little carrying case. A dedicated trigger control – notably absent from the second-gen model – has made a welcome return, and the gimbal now charges via USB Type-C.

Aside from the new features, the Osmo Mobile 3’s star attraction is how much – or rather how little – it costs. The standard version, which includes the gimbal, wrist strap, storage pouch and four anti-slip pads, is only £99. If you have a little bit more cash to spend, then the combo pack adds a carrying case and a tripod for an extra £20.

At that price, the Osmo Mobile 3 is DJI’s cheapest smartphone gimbal yet. It costs £40 less than the previous model and represents a decent £190 saving when compared with the original. 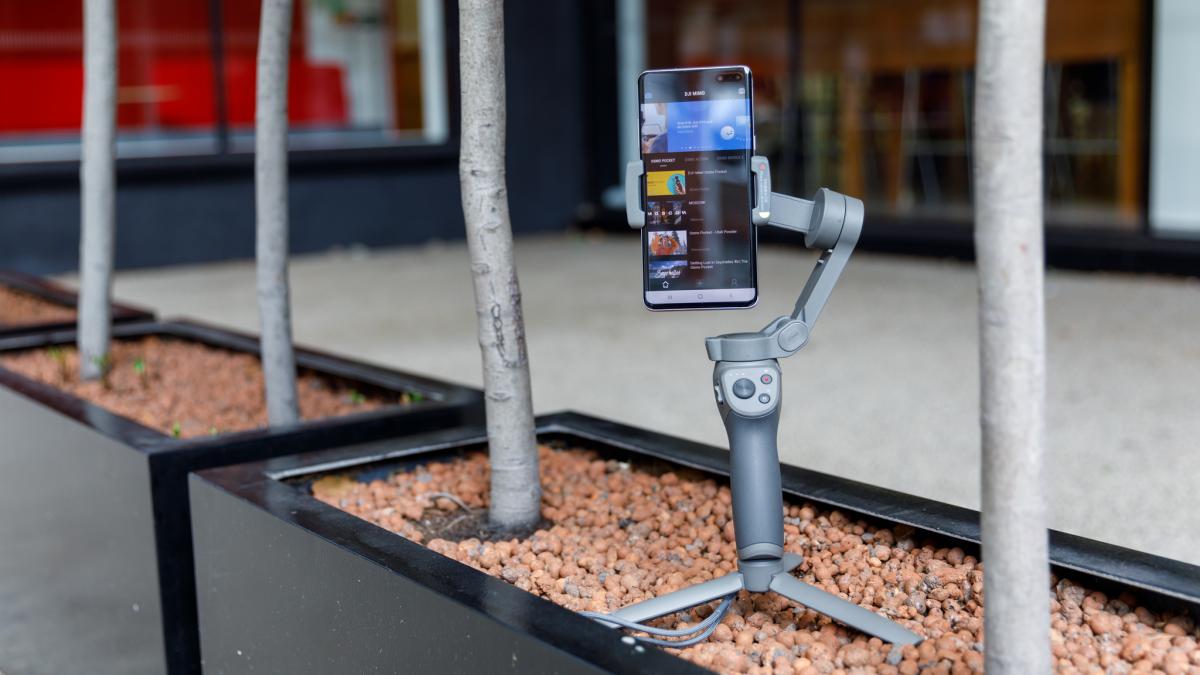 However, the Osmo isn’t the only smartphone gimbal on the market, nor is it the cheapest. A cursory glance on Amazon reveals a long list of gimbals from a wide range of lesser-known Chinese manufacturers, with some starting at a mere £80. None are quite as feature-packed as the Osmo, though, and some are little more than glorified selfie sticks.

We’ve been testing the DJI Osmo Mobile 3 against the Zhiyun Smooth-Q, which currently goes for around £104.

As I mentioned earlier, the Osmo Mobile 3 improves on the previous version in a number of ways. Firstly, DJI has introduced a few design changes – the rubberised handle is now tilted forward, for instance, allowing you to spread the weight evenly for a more comfortable grip.

Most importantly, the Osmo can now be folded inwards, allowing you to store it in a smaller case (although the tripod doesn’t fit). When the gimbal is switched off, the phone mount can be pulled towards the handle, and securely clicked into place. It’s still a bit of a tight squeeze to get it inside the case, but you can just about fit it in with careful placement. 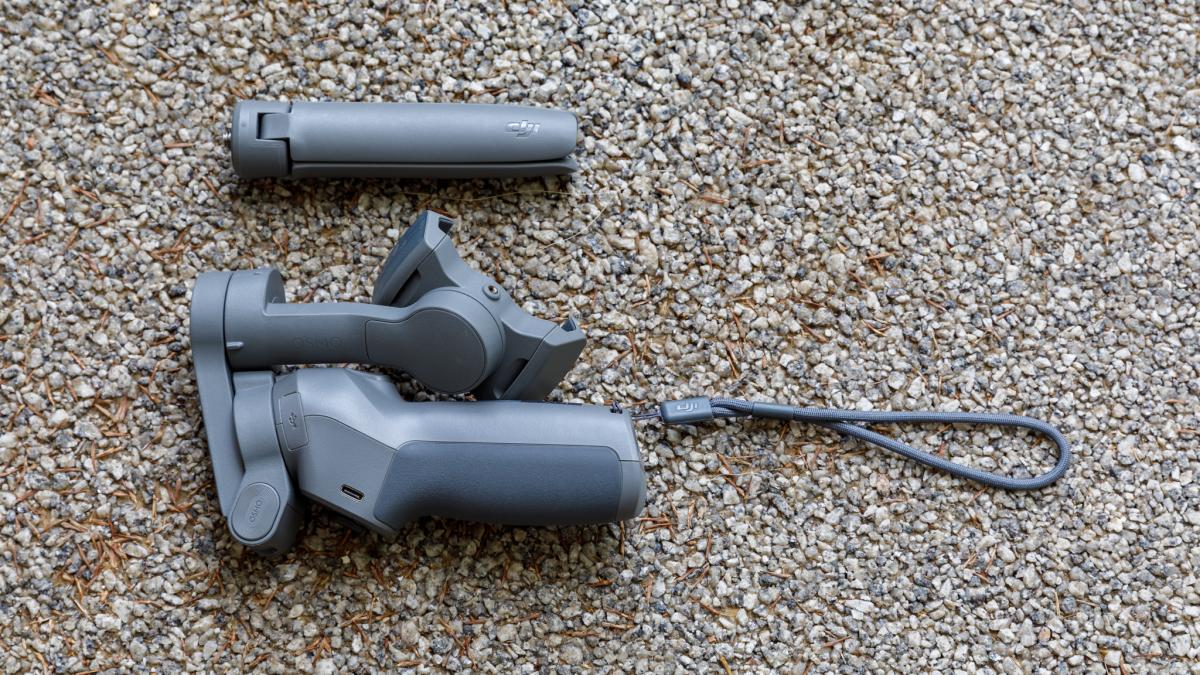 The front-mounted trigger returns too, allowing you to perform a number of actions such as locking the gimbal’s movement (single press), recentering the gimbal (double press) and switching between the front and back cameras (triple press).

This brings me to the first of the Osmo’s few shortcomings. Most actions require a bizarre mixture of button presses, and if your memory is a bit poor like mine is, you’ll often get a bit flustered. A single press of the M button for instance – which sits under where your thumb naturally drifts – switches between the photo and video modes, while a double press switches the orientation between portrait and landscape. Three presses of this button and the gimbal enters standby mode.

You can see how this can get a bit confusing when you’re out and about recording your latest BAFTA-winning short film. I can barely remember my credit card PIN, let alone learn which buttons I need to press to get the perfect shot. 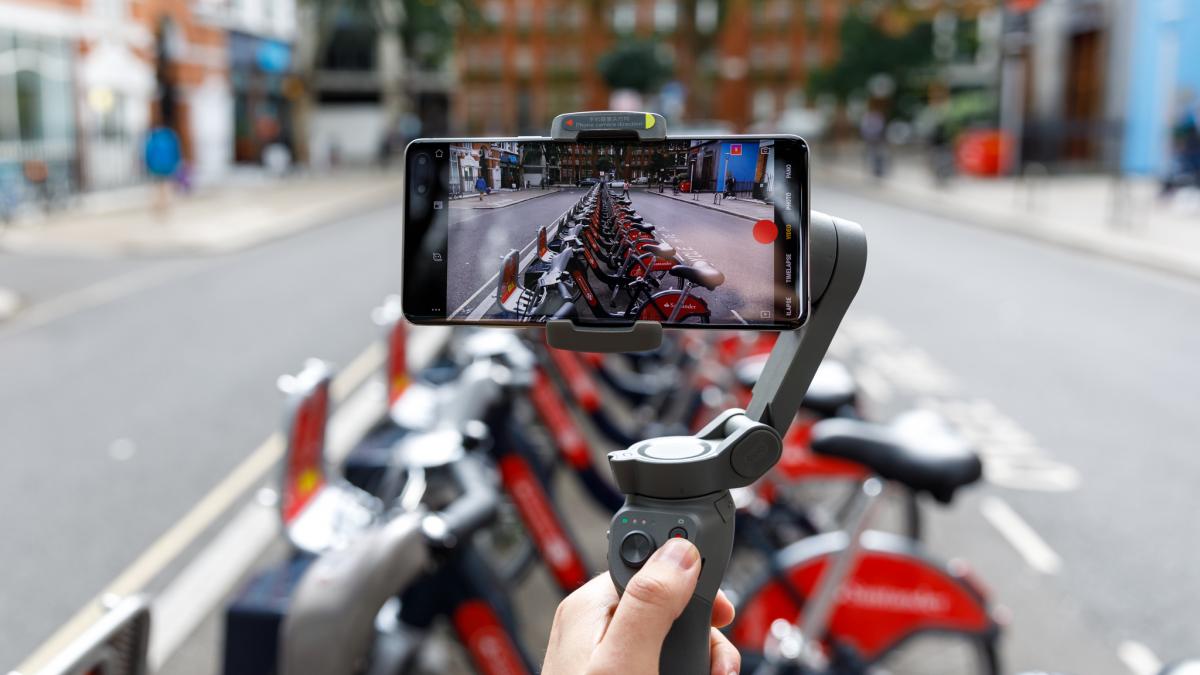 Regardless, I’m sure you’ll pick up the right combinations quite quickly, and the Osmo Mobile 3 is still a gimbal that’s filled with positives. The 1/4in universal screw mount means that you can use the gimbal in conjunction with any tripod, while the zoom slider and record button allow you to (almost) completely operate your smartphone camera from the handle. You can even use the dinky joystick for manual panning and adjust the speed in the DJI Mimo app.

The Osmo Mobile 3 has finally made the move to USB Type-C, promising faster charging speeds than its predecessors. Not that you’ll need to charge it often, mind, as the Osmo is capable of providing 15 hours of use on a single charge, which is about the same as last year’s model. You can even use it to charge your phone thanks to the side-mounted USB 3.0 port, which can also be used to hook up an external microphone.

The Osmo Mobile 3 is a nicely-designed bit of kit, but the stabilisation needs to be rock solid. In order to get going, you have to first attach the phone by simply opening up the tension mount and slotting it into the cradle, although this can be quite tricky if you want to insert larger devices such as the OnePlus 7 Pro and iPhone Xs Max.

I’m happy to report that stabilisation works well, with the Osmo successfully keeping the phone steady in extreme circumstances – yes, even while I’m exhaustingly jogging up and down the hill in Greenwich Park. As you can see from my test shots, the footage looks buttery smooth, especially as you slowly pan across the scene, although it does seem to struggle a bit with quick up/down movements.

In order to test this further, I attached the Osmo Mobile 3 to a vibrating platform – which vertically vibrates a perspex plate at a high frequency. I recorded 10 seconds of footage with the iPhone Xs’ onboard image stabilisation switched off, and compared this with the same footage using the Zhiyun Smooth-Q.

Vertical movement was more noticeable in the centre of the frame when I rewatched the Osmo’s recording. The Zhiyun’s footage was generally much steadier, which is a shame when you consider that this gimbal is three years old at this point.

It’s worth bearing in mind that this is a tricky stabilisation test, and the Osmo still does a cracking job at keeping things steady – it’s just disappointing that it doesn’t seem to do quite as well as some of its contemporaries under scrutiny. 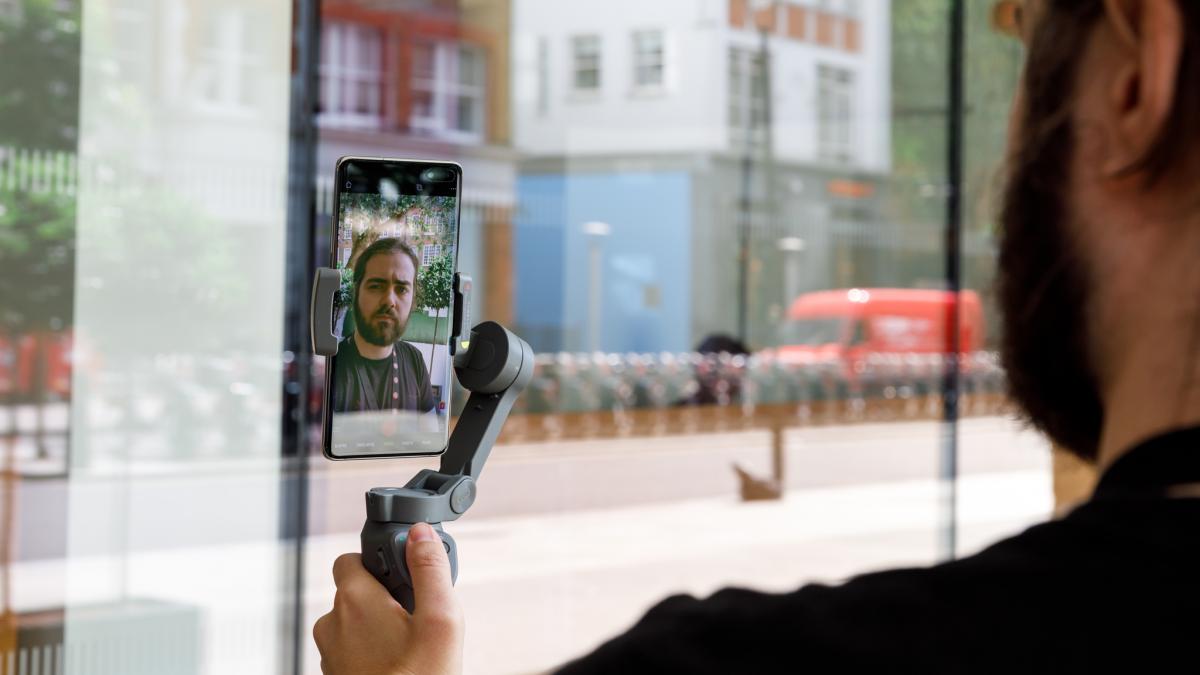 Regardless, the gimbal still does a mighty fine job at keeping up with your wrist, arm and body movements, and manages to track fast-moving targets in sports mode without losing sight of the subject.

Speaking of which, the DJI Mimo app – which is used to connect your phone to the gimbal via Bluetooth – now supports gesture-based tracking controls. Simply raise your hand or do a peace sign with your fingers and a three-second timer begins, beginning the recording. It manages to keep the person in the frame, no matter how fast they’re running around, and you can even draw a box around the object you’re wanting to track by using your phone’s screen if you prefer.

Sadly, almost everything else about the Mimo app is rather limited. You’re restricted to 30fps recording if you’re on Android – the iOS app allows you to record at 60fps – and you can’t switch between cameras if your phone is equipped with multiple rear sensors.

The app does allow you to adjust exposure levels, but you can’t alter other camera-specific settings such as ISO and white balance. However, you can adjust some of the gimbal’s settings such as the joystick’s panning speed and zoom sensitivity.

This could all change with app updates, but equally, it might well not.

App issues aside, there’s still a lot to love about the Osmo Mobile 3. It shoots stabilised video of exceptional quality and includes a superb tracking mode and other recording features that are most welcome for budding amateur videographers.

It isn’t quite as steady as some of the competition, but I’m willing to let that slide somewhat considering how nicely compact this little gimbal is. Being able to finally fold it into a small case is revolutionary, and I know I’ll be taking one of these with me on my next holiday.

The fact that it does all this while keeping the price to a reasonable £99, makes it a shoo-in for an award.