The Chuwi LarkBox would have been a great buy at $300, it is almost a must-have at $199. It is relatively speedy, extremely compact and surprisingly well designed. The only real issue is to find a use for it.

Over the past decade, we’ve seen our fair share of weird and wonderful form factors: rollable PCs (well, rollable keyboards with PCs attached), “stick” PCs, wooden triangular PCs, PCs that fit in a plug and plenty of others.

Chuwi, probably the most adventurous PC vendor we’ve seen to date (remember the Xbox-esque Aerobox), has sent us their new invention, the LarkBox which is essentially a tiny, tiny computer that they hail as being the smallest 4K mini PC.

Frankly, they’ve disappointed us a bit here as we really, really wanted to see a PC that fits in a square plug. Maybe for next time. The LarkBox will go on sale on Indiegogo and Kickstarter on June 23rd with a suggested retail price of $199. 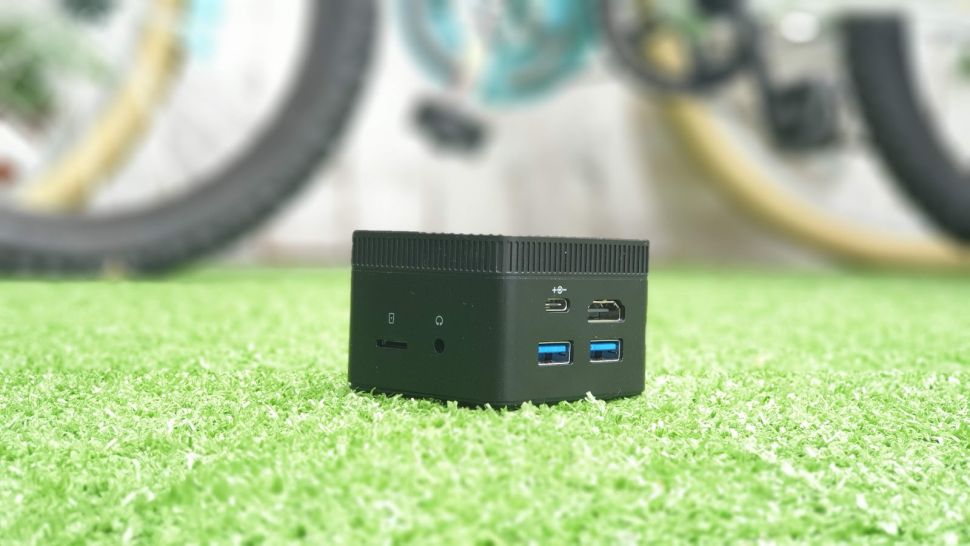 The LarkBox is incredibly small; with a diminutive size of 61x61x43mm (that’s 160cc), it reminded us of a flattened Rubik Cube and is made almost entirely of plastic. It has a power button shiny silver, a blue status light, two USB ports, a Type-C one (that provides power), a headphone jack, a card slot and a HDMI connector that supports 4K resolution. 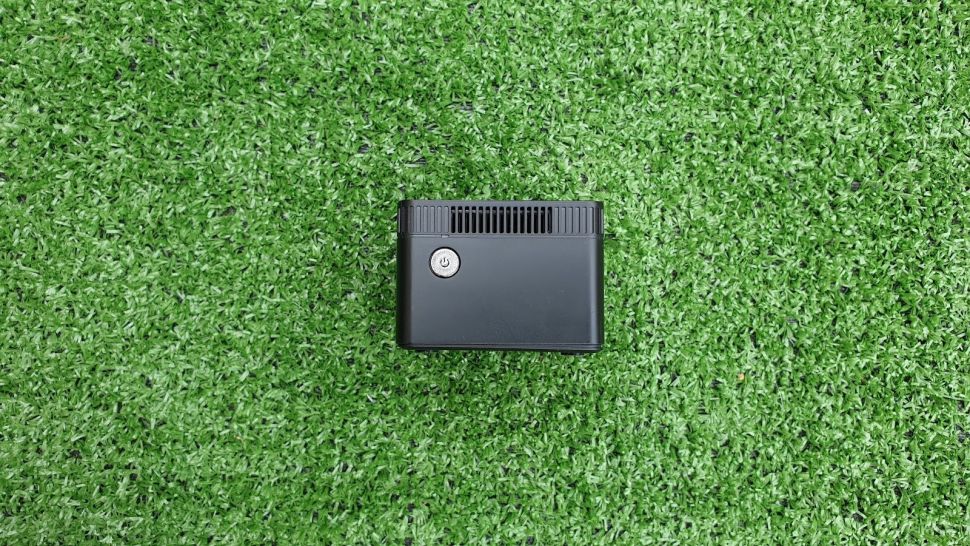 There’s plenty of gaps on the chassis to allow air circulation but that didn’t prevent Chuwi from fitting what it calls an “ultra-silence cooling fan”. More on that later. 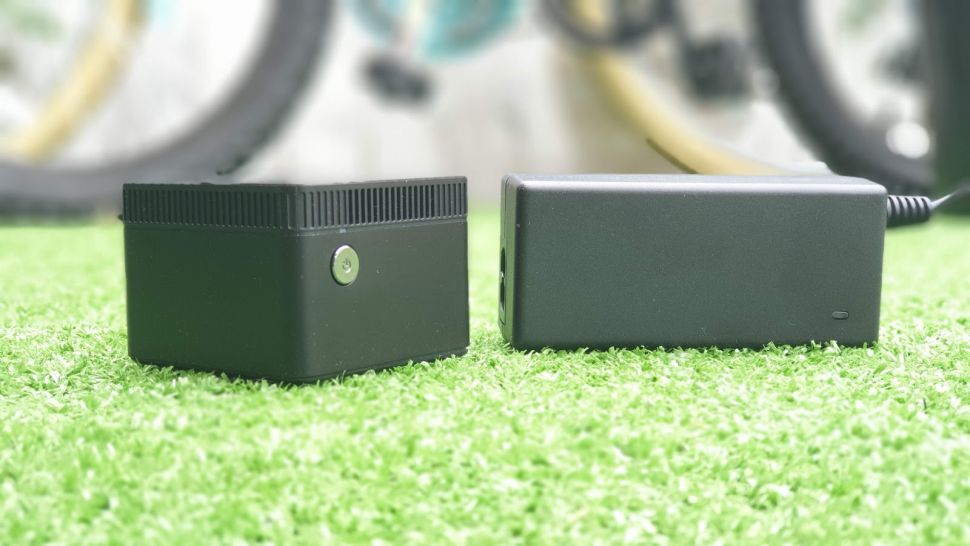 Note that the LarkBox comes with a 12V,2A power supply unit that’s actually bigger than the computer itself; it connects to the base unit via a Type-C connector and can be used to charge other devices as well.

This is a feature that all computers should have as it reduces the bill of material (and the final cost to the customer). Who wants another barrel connector? 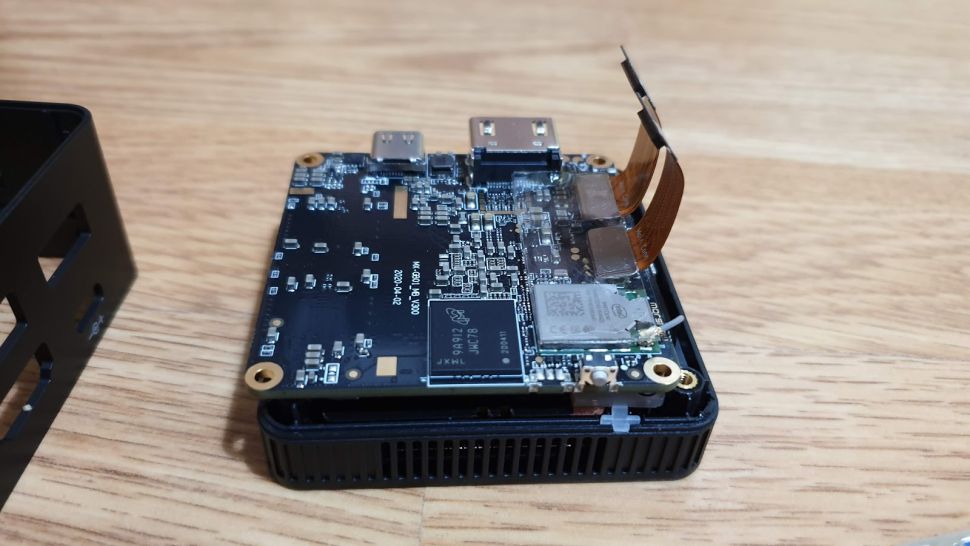 The LarkBox uses an Intel Celeron J4115, a quad-core processor that’s apparently part of the Gemini Lake refresh and clocked at 1.8GHz (2.4GHz in boost mode). Intel’s Ark doesn’t list this model and we first came across it earlier this year in another mini PC. This CPU comes with 4MB of cache and most importantly, has a TDP of only 10W.

That chip is paired with 6GB of LPDDR4 in dual channel mode and 128GB eMMC 5.1 memory (S0j59X); not our preferred option but it helps keep the price of the LarkBox low. Video is handled by the UHD Graphics 600 onboard. The Wi-Fi is handled by an Intel Wireless-AC 9461 and offers 802.11ac with Bluetooth 5.0.

We opened it up and found that the components were arranged in three layers; there’s even a spare M2.2242 slot which allows you to add a SSD although you will be hard pressed to see anything above 256GB that fits this. 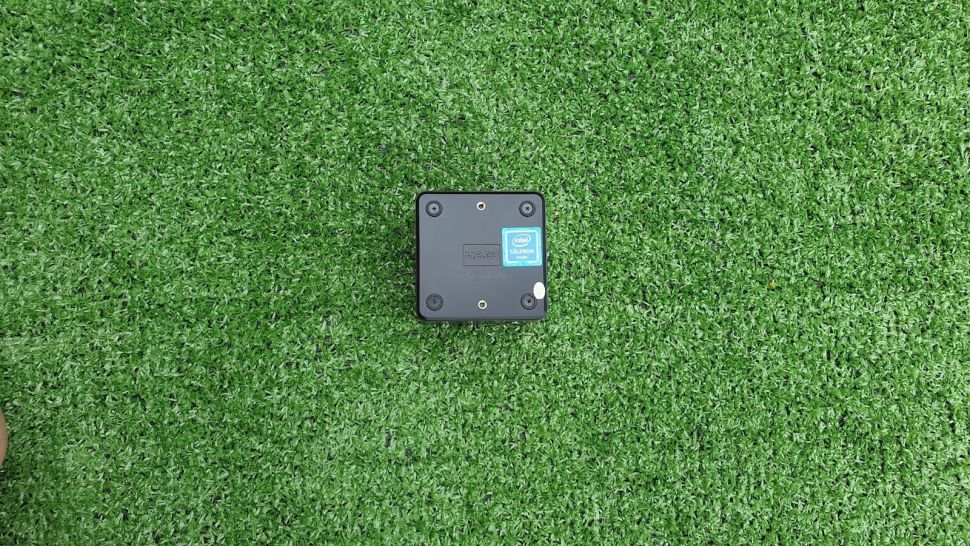 Performance and in use

The Celeron J4115 is the fastest Celeron we tested to date and excels in multi-core benchmarks. It does represent a healthy improvement on the usual N4100 models that we have encountered all too often (about 30%) which is surprising given that they are built using the same 14nm manufacturing process, have the same number of cores, the same amount of cache and number of threads.

While the compute performance of the Chuwi LarkBox was in line with expectations, we were disappointed by the storage subsystem; eMMC is simply not good enough nowadays. Fortunately, you should be able to add a second SSD and clone your existing system there. The device comes with a VESA plate that allows it to be mounted at the back of a monitor.

We found the LarkBox to be slightly loud because of the heatsink fan; in theory, the LarkBox could go fanless but that would mean carefully placing the processor in a way that helps with optimal dissipation of heat.

If you discard Android boxes, the only real competition for the LarkBox comes primarily from the stick PCs that have flourished over the past decade. They are definitely smaller than Chuwi’s newest product from a volumetric point of view (Intel’s Compute Stick that we reviewed back in 2015 was 103 x 37 x 12mm only) however, that comes with more than a few caveats.

Perhaps the most important one is the fact that they tend to connect directly (and therefore dangle from) the HDMI connector of a monitor or display. Given that many of them have HDMI ports located sideways, it adds an extra stress on these connectors that may result in a few potential issues. Being located directly behind a monitor will also affect Wi-Fi performance in general.

The best value PC stick on the market, at least on paper, is the Mele PCG02. It costs just over $200 at AliExpress and comes with an Intel Celeron J4105, 4GB of RAM, 64GB storage and surprisingly for an item of this size, an antenna, a Gigabit Ethernet port and it is also fanless.

The arrival of Intel’s Foveros 3D stacking technology will kickstart the golden age of exotic form factors. We predict that, should the LarkBox be successful, a pass-through, plug-in follow-up version will be available, something that could definitely be a hit with the hospitality/event market.

Back to the LarkBox, there’s little to dislike about it. We don’t agree to the statement that it is the world’s smallest 4K mini PC as there are Android boxes that are equally smaller (if not even tinier) that can deliver 4K content.

But this one is based on Windows and delivers the most balanced performance to date that we’ve seen from a nano-PC especially at this price. Personally, the only improvements we’d have made would be to flatten it to offer one more surface area to dissipate heat and remove the fan, swap the eMMC storage for something better and get a smaller, much smaller power supply unit.

Previous ArticleIntel CPU woes forced Apple to design own processor claims ex-employee
Next ArticleApple HomePod is finally getting Spotify and Tidal support – at least, we think it is
Comments (0)

Don't miss a deal at O2 Mobile
Best offers at Newegg
Discounts, Sales and Deals at Marks and Spencer
Save your money with TalkTalk Phone and Broadband
Online-Shopping with Intuit Small Business
Best products at Currys
Latest Posts