Portable Bluetooth speakers come in all shapes, sizes, finishes, and price points. In addition, they offer a wide range of features and capabilities, not to mention different levels of sound quality.

The Cavalier Audio Maverick sits toward the high end of the price scale, and it offers a fairly extensive set of features along with some luxury finishes. But what about sound quality? Is it worth the high cost?

The roughly cylindrical Cavalier Maverick stands tall, measuring 8.79 x 2.96 inches (height x diameter) and weighing in at 1.76 pounds. It comes with a charging base that occupies a circular footprint with a diameter of 3.7 inches. To charge the 2600 mAh battery, simply place the speaker in the charging base that you connect to an AC outlet from its USB-C port. Alternatively, you can charge the battery by connecting the USB-C port on the speaker itself to an AC outlet with the appropriate cable and adaptor (included).

Once it’s fully charged after about two and a half hours, the battery provides up to nine hours or more of operational time. Keep in mind, however, that includes idle time if the speaker is connected to Wi-Fi or Bluetooth. In that case, it never goes into standby mode, so it’s always ready for Alexa voice commands. At maximum volume with continuous music playback, the battery life is said to be less than four hours.

Two active 1.6-inch drivers face in opposite directions to produce a stereo soundfield; each driver is powered by 10 watts from the built-in amplifier. Also, a 1.5 x 2.2-inch passive radiator sits directly above each active driver to enhance the bass response from the otherwise sealed enclosure. The total frequency response is specified from 61Hz to 20kHz (±2dB) with a maximum sound pressure level of 90 dBC. At maximum output, the THD is spec’d at 1 percent.

The Maverick accepts audio via Bluetooth 4.2 from any compatible Bluetooth device; supported profiles include A2DP, HFP, and AVRCP. It does not support the aptX codec. In addition, it can join a Wi-Fi network (802.11b/g, 2.4GHz) to stream audio content directly from Amazon Music, Pandora, Spotify, TuneIn, Audible, iHeartRadio, and SiriusXM. The Maverick cannot, however, stream audio from local servers on your Wi-Fi network. Also, it does not support multi-room applications, nor can two speakers be wirelessly connected as a stereo pair. 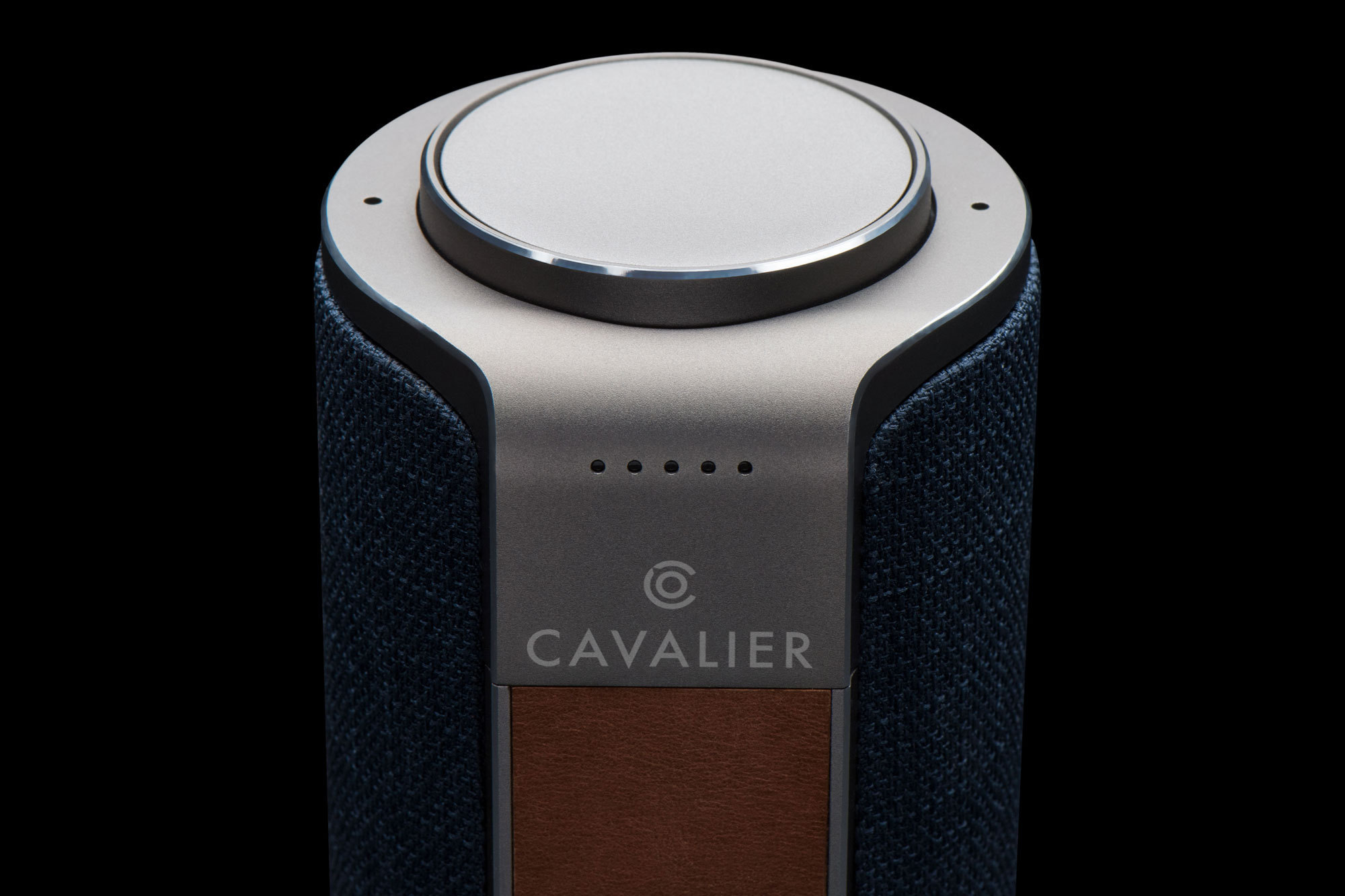 One important feature is support for Amazon Alexa voice control. This lets you speak commands to start and pause playback, change the volume, skip tracks, and control other basic playback functions from an online streaming service. Unfortunately, you can’t control playback from a source device’s local library using Alexa. On the plus side, you can also ask Alexa about the weather and other common questions, and you can control smart home devices if you have a smart home hub. The built-in microphone can discern voice commands even from far away.

Like most portable speakers, the Maverick can serve as a speakerphone when connected to a smartphone via Bluetooth. Calls are clear thanks to built-in echo and noise cancellation. A dedicated mute control assures privacy when needed, and status LEDs clearly indicate when the speaker is in privacy mode.

The build quality is top-notch. An aluminum chassis is covered with high-quality acoustic fabric and premium genuine leather. Even the USB cable that comes with the Maverick is clad in fabric, a material usually reserved for high-end cables, with a heavy-duty cable tie. Unfortunately, the included USB charging adaptor is very large—almost as big as a wall wart—potentially blocking other AC plugs on a power strip or dual outlet. 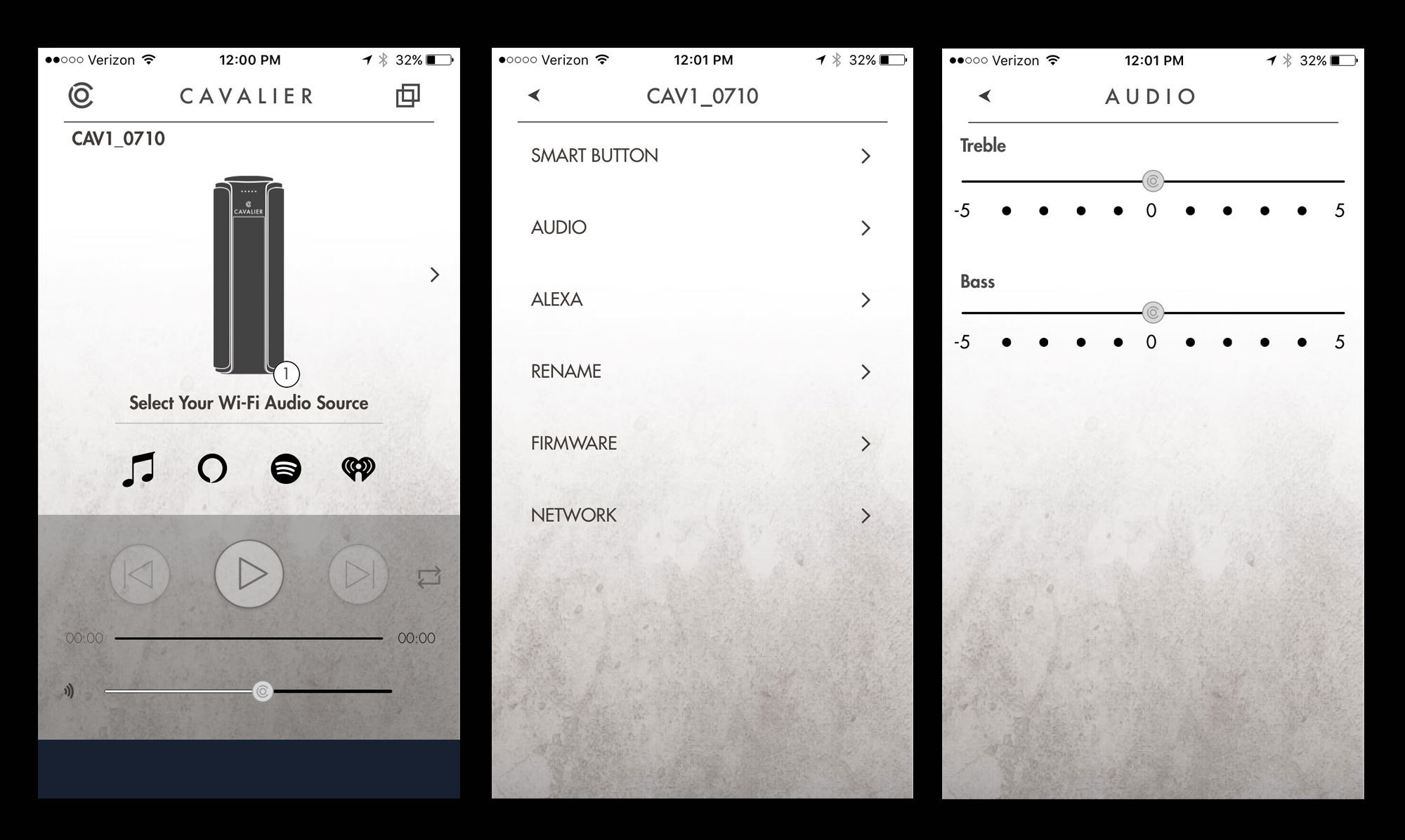 There are three ways to control the Maverick: using the controls on the unit itself, Alexa voice commands, and the Cavalier app for Android and iOS smart devices. Several controls are found on the back of the unit, including four buttons: power on/off, mute the Alexa/speakerphone microphone, Bluetooth mode/pairing, and Wi-Fi mode/setup. Below the buttons is a USB-C port for charging the battery without having to put the speaker in the base, as well as two LED indicators: Bluetooth/Wi-Fi status and charging/battery level.

A row of five LEDs on the front of the speaker indicate the volume, mute status, and when Alexa is listening. A large rotary dial on the top controls the volume, and you tap it one or more times to play/pause, skip to next track, skip to previous track, answer/hang up/ignore a call, and wake up Alexa. You can even program this so-called “Smart Button” to select a playlist in Spotify and iHeartRadio.

Aside from the physical controls, the Maverick is designed to be controlled mostly by Alexa voice commands and the Cavalier app. The app guides you through the setup routine, and then presents an overview. 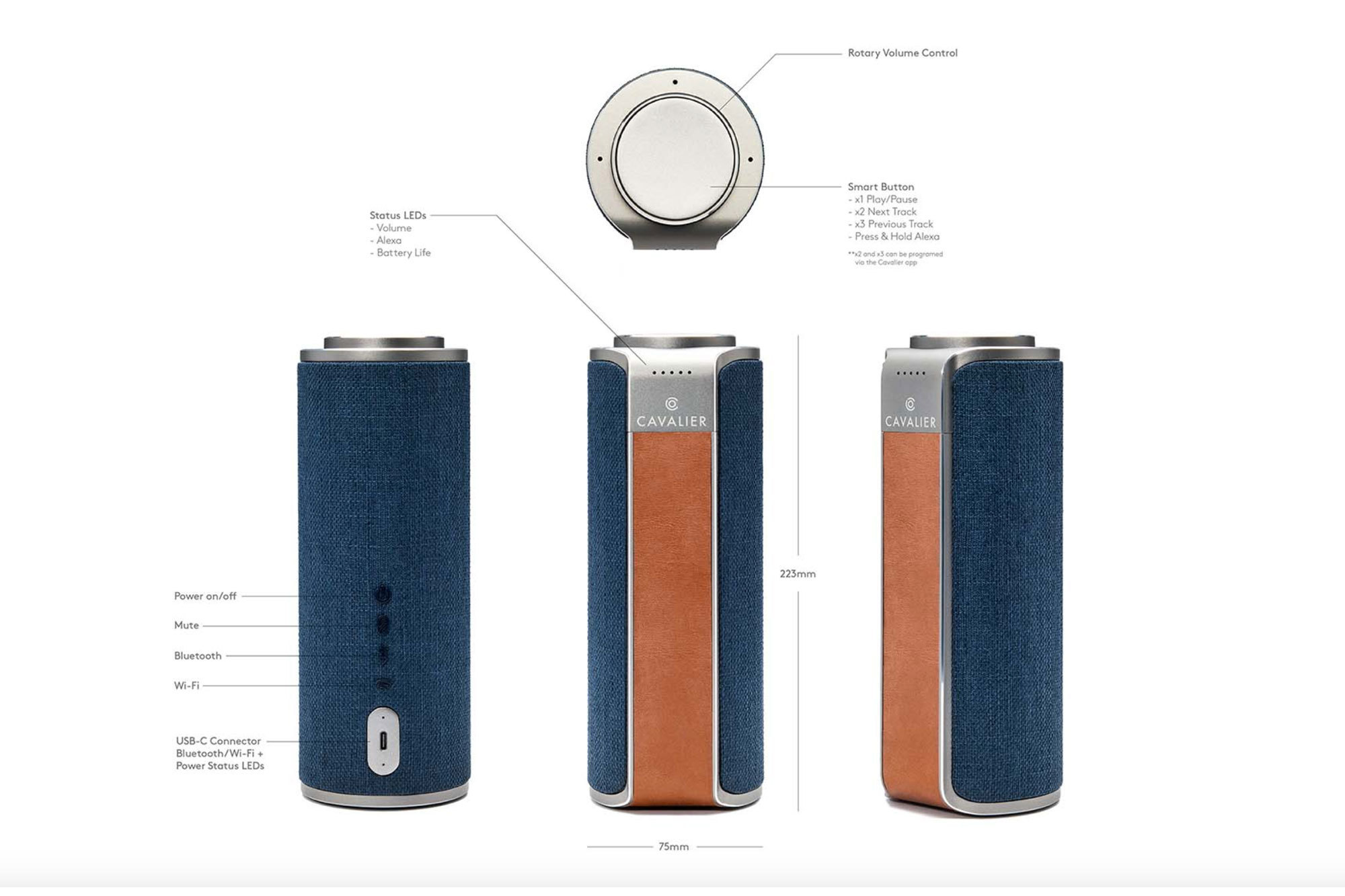 After the overview, the main control screen appears. Here, you can select the audio source, start and pause playback, change the volume, skip to the next or previous track. You can also get help, program the Smart Button, adjust treble and bass, configure Alexa tones, rename the speaker, update the firmware, and change the Wi-Fi network.

After charging the Maverick in its base, the Cavalier app guided me through the setup process, connecting the speaker to my home Wi-Fi network. I started playing some music on my iPhone 6 using the app, which provides access to the tunes in the phone’s library. I quickly discovered, however, that selecting different tunes and controlling the volume from within the app is a pain—you must click backward several screens from any list of tunes to get to the volume control. Of course, you can tell Alexa to change the volume, which is much easier, but I still think that the basic playback and volume controls should appear in each song-list screen as well.

I started with Esperanza Spaulding’s “Judas” from her album D+Evolution, which includes lots of bass with guitar and drums as well as her vocals. Overall, the sound was dry and a bit closed in, and the bass was somewhat weak, though the vocals sounded very good. 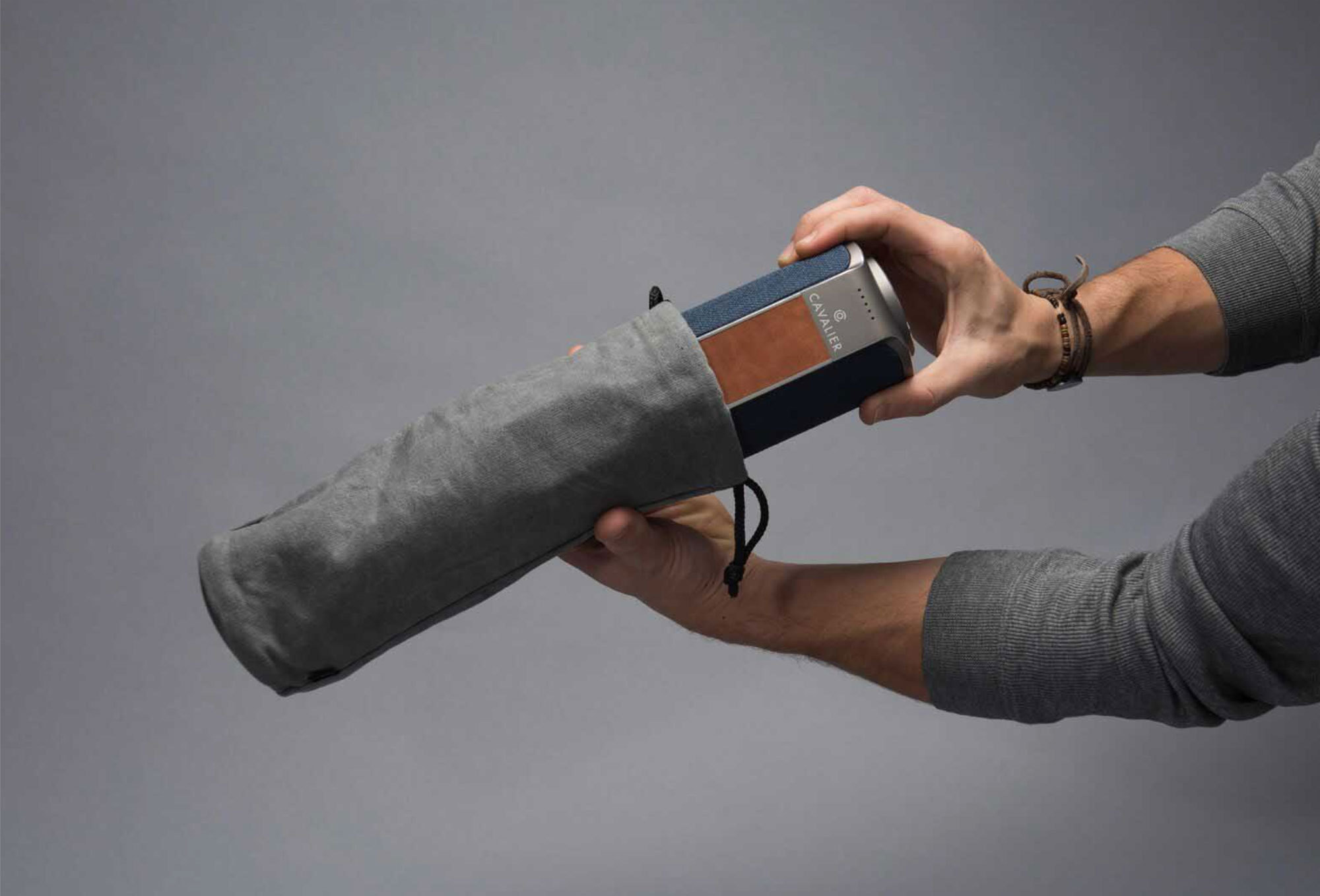 Another good bass test is “Flight of the Cosmic Hippo” from Bela Fleck and the Flecktones’ album of the same name. From the Maverick, the bass was lacking, and the overall sound was slightly closed in, like it was coming from a small speaker—which it was, though I’ve heard other small speakers that formed a much larger soundfield. The banjo and harmonica, however, sounded quite good with clean, clear highs.

Similarly, “New Frontiers” from Donald Fagen’s The Nightfly sounded like it was coming from a small speaker, with no stereo spread. The midrange was slightly muddy, and the bass was restrained, but Fagen’s vocals were good.

I tried playing with the bass and treble controls to see if I could strengthen the bass, but the controls didn’t do much at all. Increasing the bass only made it slightly more muddy, while turning down the treble only muffled the cymbal sizzle. So, I left the controls in their default, middle positions.

Turning to classical music, I listened to Dionysiaques, Op. 62 by Florent Schmitt as performed by the Cincinnati Wind Symphony on the album Songs and Dances. I’ve played the euphonium part in this piece, so I know it well. Overall, the Maverick’s sound was well balanced with good rendering of the different instruments and sections as well as very good dynamic range. The midrange, however, was slightly congested, and there was no stereo spread. 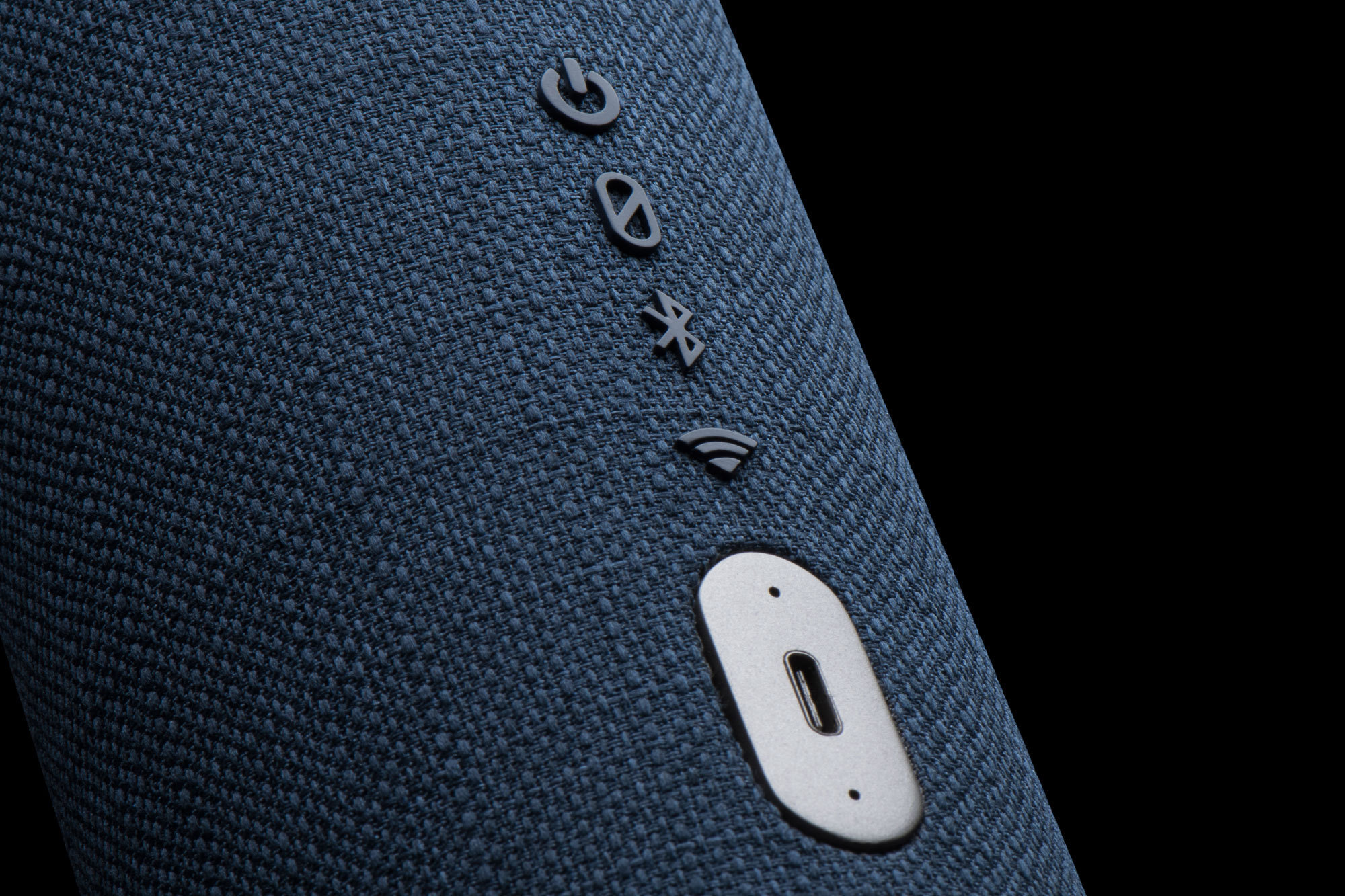 I also played on the Southern California Early Music Consort’s album A Festival of Renaissance Dances. Among the tracks on that album is “The Fairie Round,” by Anthony Holborne, played on shawms (renaissance oboes), cornetto (a hybrid instrument with a trumpet-like mouthpiece and finger holes like a recorder), sackbuts (renaissance trombones), and tambourine. The sound was fairly clean and dry with good definition of the instruments, but as before, the sound was slightly congested in the midrange.

Switching to online streaming, I used Alexa to call up several selections from Amazon Music, starting with the playlist called 50 Great Beatles Songs. It started with “A Hard Day’s Night,” which sounded as I had come to expect—slightly dry and closed in with weak bass but good vocals. I told Alexa to turn the volume down and up as well as skip to the next track (“Come Together”), all of which it did flawlessly. The response time, however, seemed a bit slow.

I also played the Overture from Music for the Royal Fireworks by Handel as performed by the Academy of St. Martins in the Fields under Sir Neville Mariner. The sound was well balanced among the instruments and sections, though again, it was slightly closed in and dry.

During my listening, I compared the sound of the Maverick to that of two other Bluetooth speakers I had on hand: the JBL Xtreme 2 and the Tronsmart Element Force, both of which I recently reviewed on TechHive. To switch quickly between these three speakers, I had to use Bluetooth with all of them, which wasn’t a problem; all I had to do is push the Bluetooth button on the back of the Maverick. I could then select each speaker in the phone’s settings and play directly from the Music app.

In all cases, the JBL Xtreme 2 sounded much richer and more open with deeper, bigger bass. This was especially evident on “Judas” and “Flight of the Cosmic Hippo.” The sound was sometimes a bit muddy in the low end, however, and the stereo soundfield wasn’t much better than the Maverick’s; the sound from the JBL seemed to be coming from a relatively small speaker.

The Cavalier Maverick is a well-built wireless, portable speaker that accepts audio via Bluetooth and online streaming via Wi-Fi. It also incorporates Alexa voice control, and it comes with a cool charging stand that keeps the battery topped off. It also comes with a fabric carrying bag, which is great for taking it on the go, since it doesn’t have any sort of handle on the unit itself.

The sound quality is reasonably good, but not stellar. Overall, the sound is lean, dry, and slightly closed in with restrained bass, though the highs are clean and clear, and its dynamic range is very good. On the other hand, it exhibits no stereo sound field to speak of.

It seems to me that a goodly fraction of the Maverick’s high cost must have gone into the high-quality materials used in its construction. That’s all well and good, but if it was done at the expense of better sound quality, I would not have made such a tradeoff.

Speaking of cost, the Maverick’s street price of nearly $250 is much higher than either the JBL Xtreme 2 ($170) or the Tronsmart Element Force ($60). Plus, I prefer the sound of either one over the Maverick. So, unless premium build materials are very important to you, I’d look elsewhere for a portable party.

Fine build materials and Alexa voice control don’t compensate for mediocre sound quality, which in turn does not justify such a steep price tag.

Previous ArticleSharp is working on a new Dynabook AIO with an 8K, 120Hz display
Next ArticleXbox One update adds a mini keyboard and smarter uninstalls
Comments (0)

Don't miss a deal at Argos
Best offers at The Home Depot
Discounts, Sales and Deals at Groupon
Save your money with Currys
Online-Shopping with TalkTalk Phone and Broadband
Best products at Myprotein
Latest Posts