GE’s C-Start lineup was announced at CES in 2019, extending the lighting-focused sub-brand from bulbs to in-wall switches (the company has since dropped the C-Start branding from its marketing materials). These switches work with any type of bulb, but one of the big selling points is that if you use C by GE smart bulbs, the switches can also control those bulbs, even if they aren’t physically wired into the switch. In other words, if you have multiple bulbs controlled by multiple switches, you can control them all with a single C-Start switch (provided you’re using C by GE bulbs).

From a hardware standpoint, the C-Start Switch is designed much like any other Wi-Fi connected smart switch on the market. Four pigtails emerge from the rear of the switch, and you wire these into your existing receptacle wiring with the included wire nuts. As is typical, the presence of neutral and ground wires is required. The company recently introduced 3-wire variants of these products that don’t depend on the presence of a neutral wire in the electrical box in which they’re to be installed. This link will take you to the 3-wire version of the C by GE Motion + Dimming at Amazon.) The company says you can use these switches with a three-way or multi-way circuit through some creative wiring, but both switches on the circuit must be C by GE Smart Switches for this to work.

GE offers a small booklet of instructions for those doing a simple (single-pole) installation. I encountered no real issues here and was able to get the device installed in about 15 minutes. In fact, the block of electronics on the back of the switch seems a bit smaller than the one on most smart switches, which is incredibly helpful when it comes time to shove everything back into the junction box.

From here, configuration is done through the C by GE app, which is the same app used to control C by GE bulbs. Once you’re logged in, you simply hit the + icon to add a device and walk through a few simple steps, including connecting the switch to your Wi-Fi network. Helpfully, the setup process also walks you through connecting the switch to Alexa or Google Assistant, if you’re planning on using either of these systems. Again, I had no trouble with any of this, with only a minor hiccup that took the app a bit of extra time to find my Wi-Fi network. 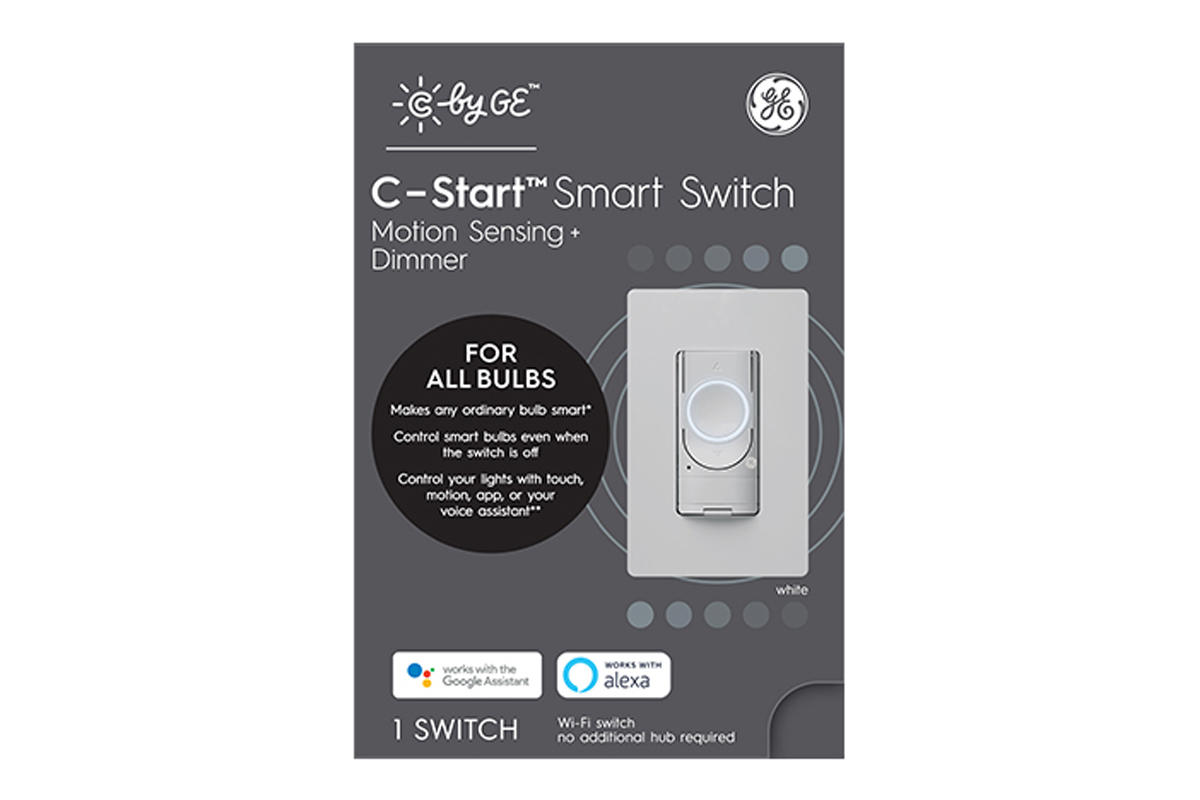 Once configured, user options are limited but largely easy to understand and operate. Devices—including multiple switches and bulbs—are organized into rooms and can be controlled together. As well, you can create mood lighting scenes to control multiple devices simultaneously in multiple locations. Either rooms or scenes can be automated based on schedules, including tying actions to sunrise or sunset. If you want lights to slowly fade on or off, this can be configured for any automation rule, with fade times ranging from 10 seconds to 30 minutes.

The switch hardware includes a dimmer as well as two sensors, a motion sensor and an ambient light sensor. The dimmer function is obvious: Either use the slider in the app or use the paddles on either side of the power button on the switch face to brighten or dim the light. Click-and-hold to dim in real time, or double-click to quickly reach maximum or minimum brightness. The motion sensor (which is on by default) is similarly simple: When the sensor detects movement, it turns on the light (to the last dimness level), and lights remain on for five minutes.

Similarly, the ambient light sensor (off by default) detects the light level in the room. If the ambient sensor is turned on and motion is detected, the lights won’t come on if there’s already enough light detected. You can set the motion sensor to deactivate during nighttime hours (so the dog doesn’t set it off), though this portion of the app is surprisingly unintuitive and requires a bit of tinkering to get to work. Lastly, a blue nightlight is built into the switch as a ring around the primary power button. This light can be turned off if you desire.

All told I was very happy with operation of the C-Start Smart Switch, but less thrilled about its hacked-together appearance, which is one reason I chose to install it in my basement rather than my living room. There’s just no way around it: This is a very homely device that looks like it was cobbled together from old hospital equipment, not something released in 2019. Next to the more sophisticated looks of devices like the Wemo Wi-Fi Smart Dimmer, the situation is even more dire.

At $75, the C-Start isn’t cheap. Compare to the aforementioned Wemo (now $50, though it lacks a motion sensor) it feels pricy. It’s also about the same price as the Ecobee Switch+, which runs $80, and includes not only motion sensing but also a speaker and an Alexa system. While the C by GE C-Start works just fine, the price will need to tick down $10 to $15 to make it truly competitive.

A bevy of sensors give the C-Start Smart Switch ample utility, but a high price tag ($75 at launch) and questionable design aesthetic will give some pause.

Don't miss a deal at Sky
Best offers at Boohoo
Discounts, Sales and Deals at The Home Depot
Save your money with Go Daddy
Online-Shopping with Turbo Tax
Best products at Groupon
Latest Posts