Electric bikes are very much in vogue but they’re still some way from being the perfect commuter’s companion. They’re big, they’re heavy and folding models – a necessity if you use peak-hours trains – are prohibitively expensive. Take the Brompton Electric, for instance. It’ll set you back up to £2,845.

The B’Twin Tilt 500 Electric from Decathlon bucks this trend. At 18.6kg, it’s hardly what you’d call lightweight but with a £650 price tag, it’s less than half the price of any other folding e-bike we’ve tested. Heck, it’s cheaper than a non-electric Brompton. 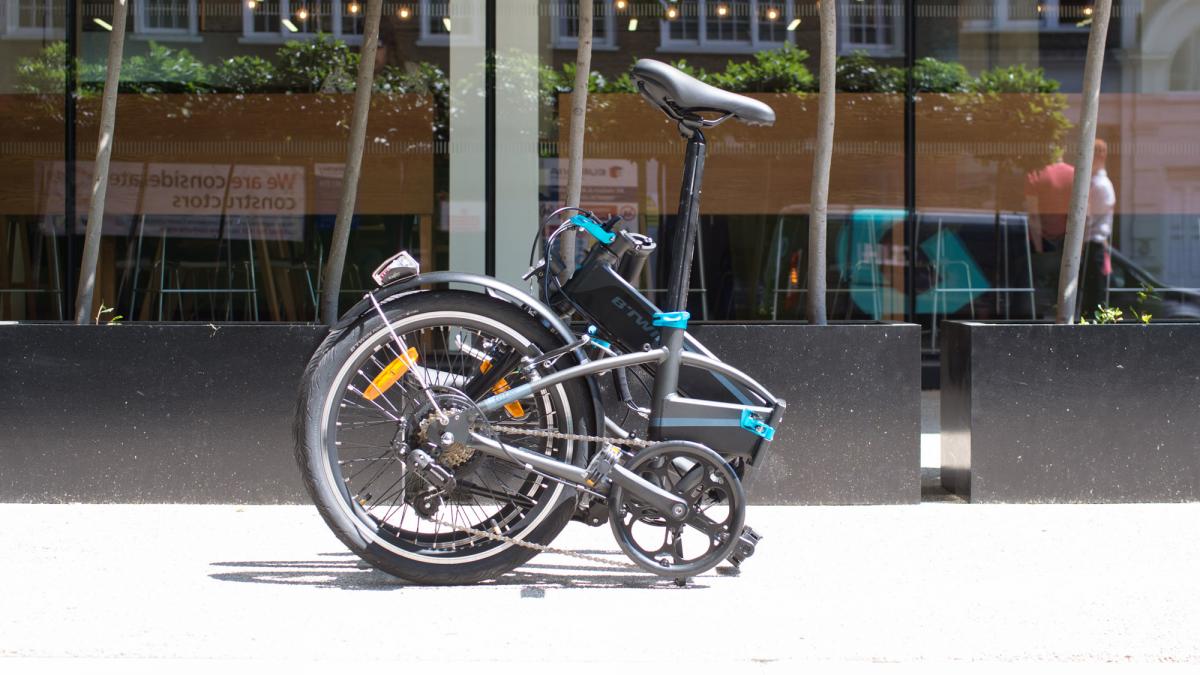 B’Twin Tilt 500 Electric e-bike review: What you need to know

There’s no doubt this is a more basic e-bike than rival models from Gocycle and even Volt – the Tilt 500 Electric uses rim brakes rather than disc brakes and has no suspension, to name the most obvious omissions – but you still get plenty of bang for your buck.

Like most electric bikes, the B’Twin is powered by a 250W brushless hub motor and supplying this with power is a 24V, 7.8Ah battery that’s built into the frame. There are three different riding modes to choose from – Eco, Normal and Sport – and depending on how you use it, it delivers a range of up to 35km (21.7 miles). 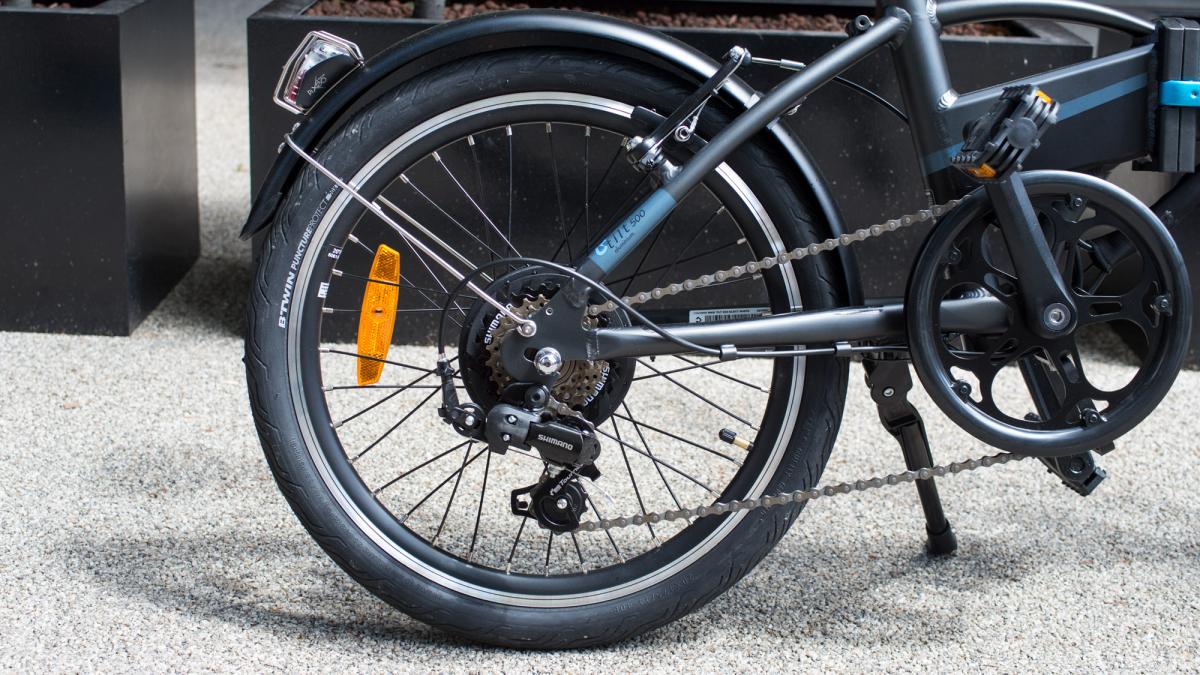 As for the drivetrain, there’s a six-speed Shimano Tourney rear derailleur and the Tilt 500 Electric has aluminium V-brakes to help bring you to a halt. The bike comes with mudguards and front and rear LED lights (that are activated from the handlebar controls) as standard, making it perfectly suited to commuting all year round.

The bike also comes with a two-year warranty and the battery has a listed lifespan of between 350 and 500 charge cycles.

There aren’t many folding e-bikes from well-known brands that can compete with the £650 price tag on the B’Twin Tilt 500 Electric. Halfords’ Apollo Transport (£600) is one such model, although it’s a rather ugly looking thing. Otherwise, the cheapest electric folding bike we’ve tested is the Volt Metro, which costs £1,400.

At the premium end of the market, there are plenty of great options to choose from. The Brompton Electric and Gocycle GX, for instance, are both superb feats of design and engineering but they’ll cost you £2,700 and £2,800 respectively. And if you want the lightest folding e-bike, the Hummingbird Electric costs almost £4,500. 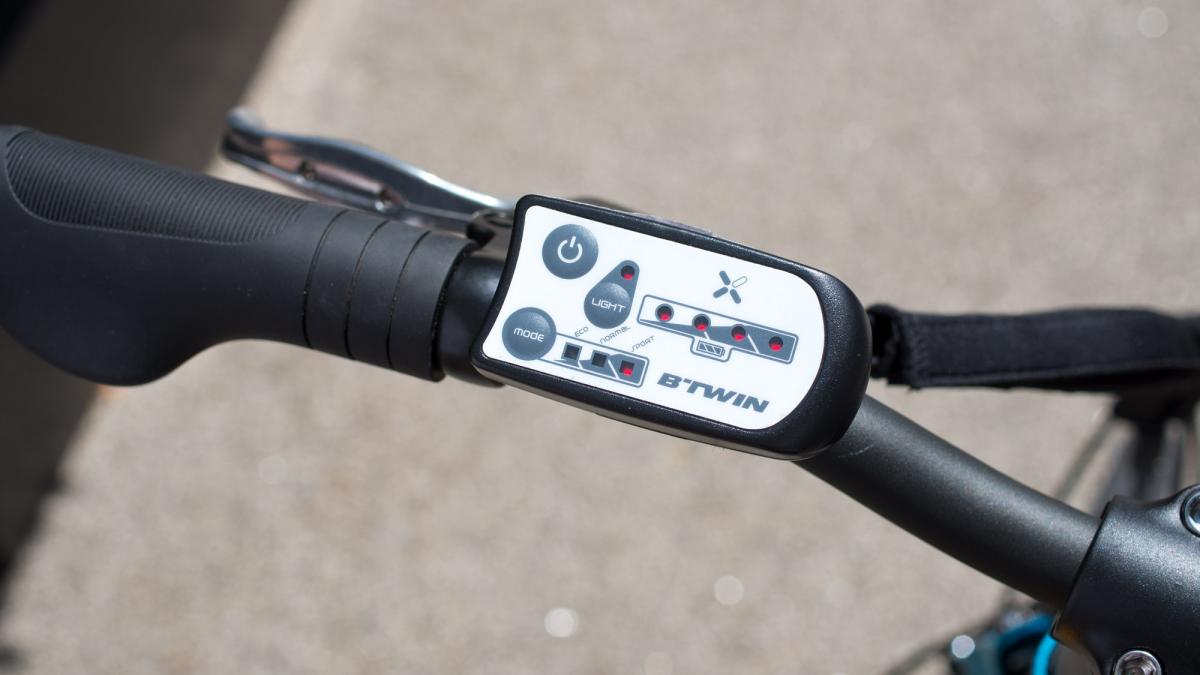 There was very little to assemble when the Tilt 500 Electric arrived, boxed-up, at Expert Reviews HQ. Just unfold its handlebar, inflate the tyres and it’s ready to go. To turn the bike on, simply press the power button on the control unit on the handlebar, which also has buttons to switch riding modes and enable the front and rear lights.

This control panel also displays the current battery status. When the charge is low, you simply plug the power supply directly into the left side of the frame near the main hinge. And if you don’t have a convenient parking spot near a power socket, the battery can also be fully removed for charging.

As for the folding mechanism, the B’Twin Tilt 500 Electric has two hinges: one on the main frame and another on the steerer. Folding it isn’t much a test of guile as it is strength. It’s for this reason, along with the fact that the bike has a fairly large footprint of 0.83m x 0.45m, that I’d avoid fully collapsing the Tilt 500 Electric whenever possible. 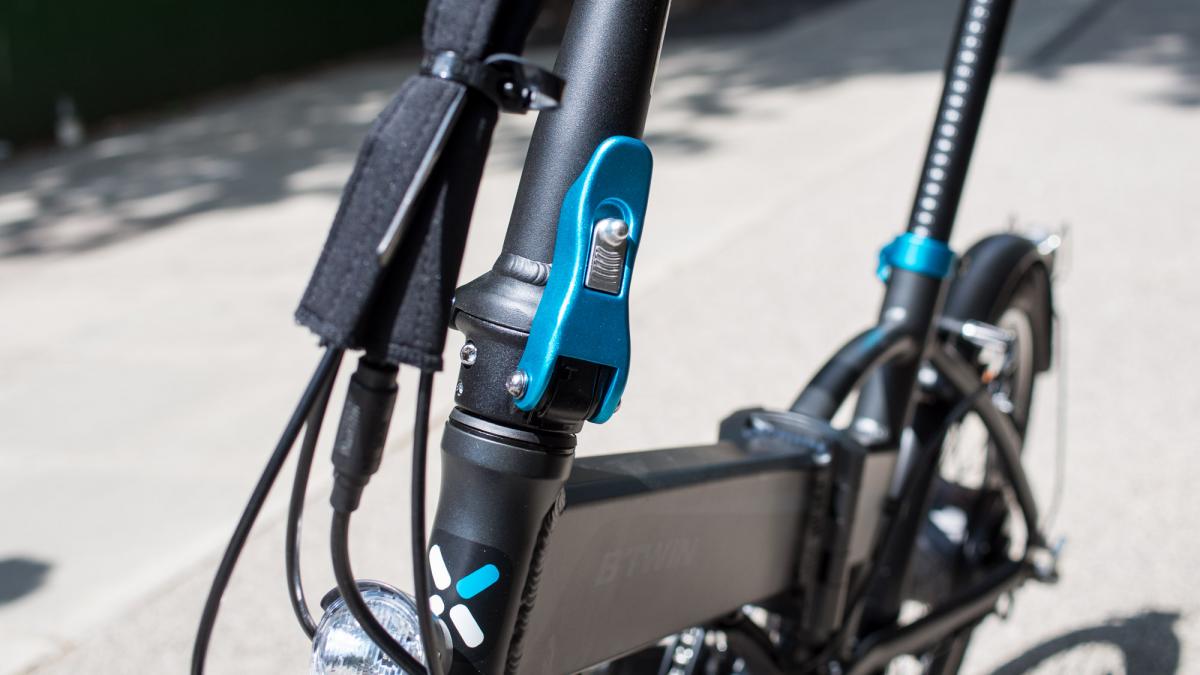 On my train journey, for example, I’d always try to make do with simply collapsing the steerer hinge so the wide handlebars wouldn’t obstruct the gangway. Apart from anything else, it’s much easier to reassemble and be on your way faster but you also wouldn’t want to carry the bike any distance in its folded state. That’s a criticism that you can level at practically any folding e-bike considering most weigh in excess of 15kg but the Tilt 500 Electric can at least be wheeled short distances using the saddle as a handle, much like the Gocycle GX.

In fact, it’s far easier to carry in its unfolded state. A short brace connecting the seat tube with the main frame beam doubles as a handle, allowing you to carry the bike at full arm’s length, very close to your body, which is ideal when lifting it up or down flights of stairs or on and off the train.

Overall, the Tilt 500 Electric is very well equipped for the price. Its mudguards and integrated LED lights are particular highlights, but there’s also a very practical kickstand that kept the bike upright at all times when I parked the bike on the train. It’s also compatible with the B’Twin Tilt 20in pannier rack if you want to bring luggage with you without wearing a backpack.

In fact, the only areas in which Decathlon has obviously made compromises are on the bike’s contact points. Although far from the worst I’ve sat on, the saddle would be one of the first things I’d swap. It’s thin and flexy. The folding pedals, too, aren’t as sturdy as I’d like.

My only other gripes were with how well it the bike had been assembled rather than than the build quality, per se. There was a small amount of play in the headset, for instance, and a tiny screw that stops the seatpost being fully removed had been inserted askew, causing it to catch when moving the seatpost up and down. 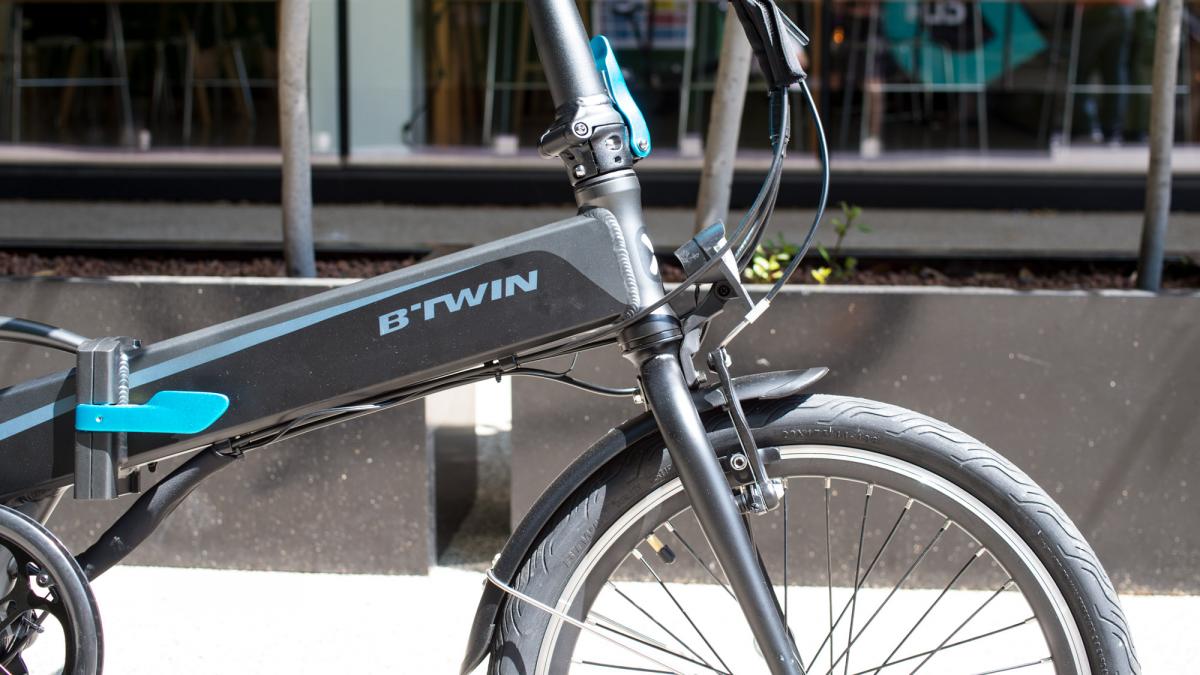 Thanks to its 20in wheels, though, the Tilt 500 Electric delivered a comfortable and assured ride that’s still relatively agile and, crucially, fun. Handlebar height is adjustable, too, which makes it suited to riders between 1.45m and 1.85m tall, and great for commuting, where comfort is more of a concern than top speeds.

Talking of top speeds, the three different riding modes differ according to the speeds up to which the rear hub motor gives you pedal assistance, as opposed to a power threshold at which it starts giving assistance. In Eco, you’ll get pedal assistance up to 17km/h (10.5mph), while in Normal and Sport modes it’s 22km/h (13.7mph) and 25km/h (15.5mph) respectively.

Irrespective of which mode you use, there’s a decent surge of power when you first turn the pedals because the B’Twin Tilt 500 Electric uses a cadence sensor as opposed to a torque sensor. That’s great for getting up to speed at traffic lights while putting in a minimum of effort, but the flipside is that you’ll need to be careful not to get catapulted in front of moving vehicles when filtering in traffic. 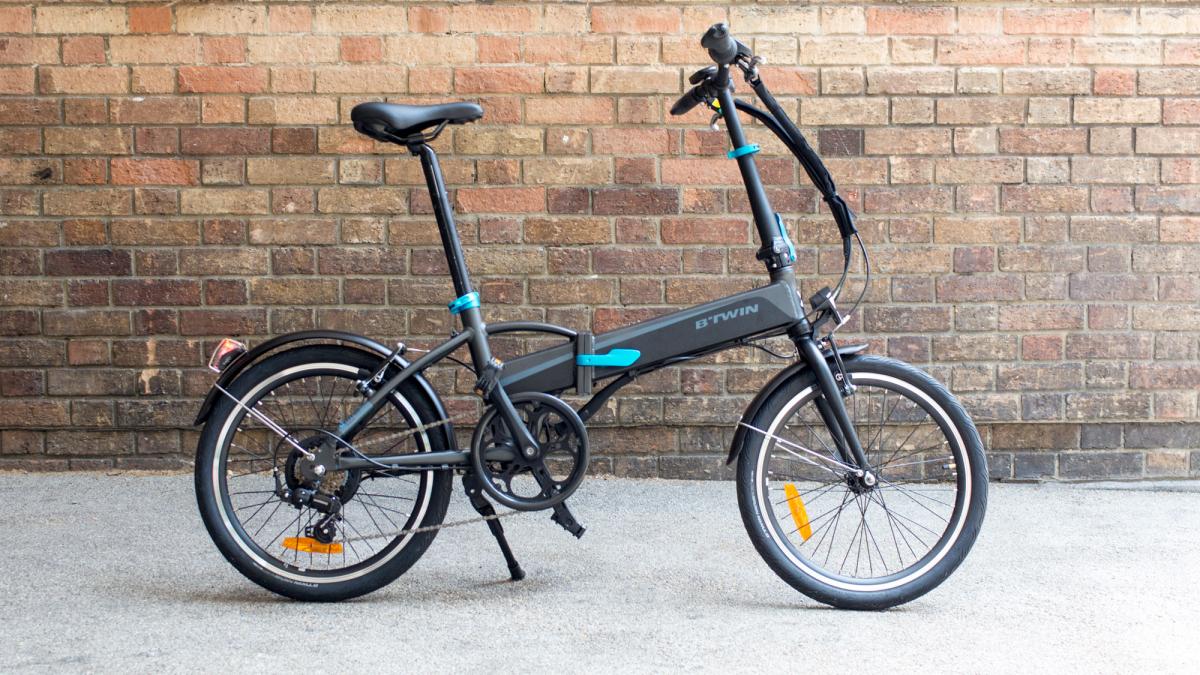 The range is listed as up to 20km or just 12.4 miles in Sport mode, which is considerably less than some of its rivals but I found the Tilt 500 Electric went further than that. Indeed, using it almost entirely in Sport mode, I found it lasted for closer to 20 miles from one charge.

My main frustration wasn’t a lack of range but rather the inaccuracy of the control panel status lights and the lack of any kind of display to tell you how far you’ve ridden on this charge. The manual recommends checking the battery status when you’re stationary, but even then I found it undependable. If you can afford to let the battery go fully dead, that’s probably the best way to determine the bike’s true range, and then choose how regularly to charge it based on that.

I couldn’t be certain, but after a particular mileage, I also wasn’t sure the motor delivered assistance with quite the same vigour as it did when fully charged. Irrespective, the range is enough that if you intend to use the B’Twin Tilt 500 Electric as a last-mile solution on both ends of your commute, you’ll probably only need to charge it once a week while getting enough help to avoid breaking a sweat.

In practically every other way, the B’Twin Tilt 500 Electric performed as I’d expect an e-bike of this price to perform. Gear shifting via the Revoshift shifter is functional if occasionally a little ponderous, and with six gears to choose from the bike is well suited to flat and slightly lumpier areas alike. The aluminium V-brakes were also effective and never left me in doubt as to whether I’d come to a halt at the bottom of a steep hill.

So what’s not to like? Very little, in fact. I’ve enjoyed using the B’Twin Tilt 500 Electric so much that I would consider buying one myself should I move further away from the train station in Sussex.

Sure, it’s very much a no-frills solution compared to something like the Gocycle GX. It clearly lacks the refinement and sophistication of its pricier rival but if you want an e-bike you can take anywhere without breaking the bank, it delivers emphatically. It’s comfortable, fun to ride and, most importantly, delivers plenty of pedal assistance.

And because it comes with the full works – mudguards, lights, prop stand – included, there’s no need to fork out on any extras when you buy it. Perhaps, though, you might want to add a bike computer so you know how far you’ve ridden.

Don't miss a deal at Sky
Best offers at Marks and Spencer
Discounts, Sales and Deals at Farfetch
Save your money with Virgin Media
Online-Shopping with O2 Mobile
Best products at H&R Block
Latest Posts