If you’ve bought into the Bose smart speaker ecosystem, you’ll welcome the latest addition to the family: the very compact and highly competent Portable Home Speaker. The first voice-activated model in the line to run on rechargeable battery power, Bose’s bucket-handled roustabout responds to Alexa or Google Assistant voice commands, touch pad bumps, and cues from a well-polished app to serve up music, podcasts, and more sent by Wi-Fi and Bluetooth, Airplay 2, and Spotify Connect. Anytime, anywhere.

While you might encounter this $349 newbie in a retail display and ponder “how could something this small be this expensive?” That’s almost the point: You’re paying more for less—bulk, that is. This cute little 2.3-pound bucket of sound aims to be your constant companion, it practically begs you to pick it up by its handy dandy, fabric-wrapped handle and carry it around. This speaker will reveal different personality traits depending on where it’s placed.

Take it out of the box and download the companion Bose Music app onto your Android or iOS mobile device, and this pretty, aluminum-grilled thing will wake up in a flash. The app offers access to Amazon Music, Spotify, Pandora, Deezer, SiriusXM, TuneIn, and iHeartRadio when you’ve established accounts. Setting it up with AirPlay and/or Bluetooth opens the gates to lots more content. Analog audio input jack? Nope. 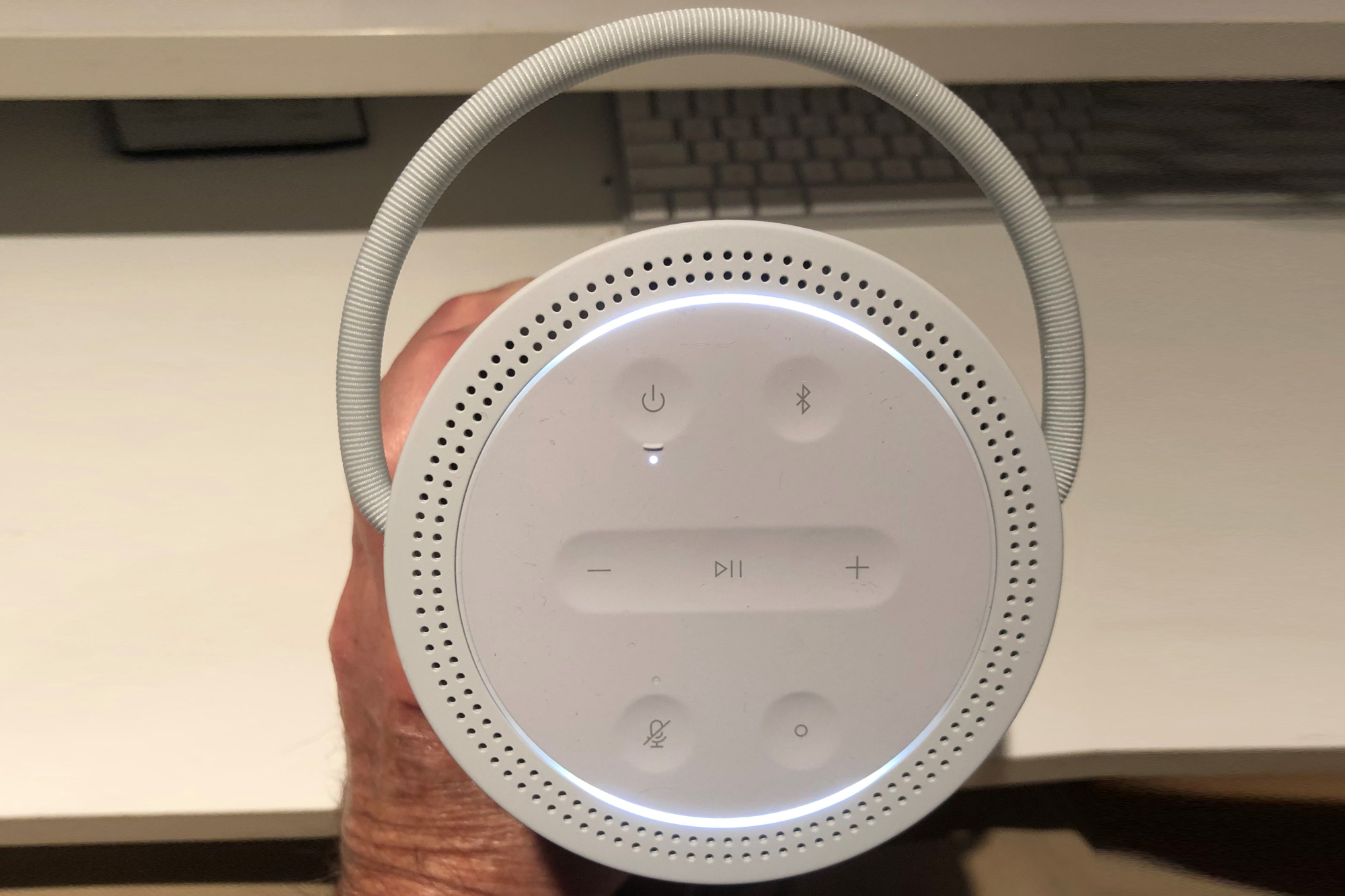 It’s worth noting that Bose Home Speaker products can access Amazon Music via voice command only if you choose Alexa as your default digital assistant platform. If Google Assistant is how you roll, the Amazon music site can be deployed only through the Bose app.

Atop the speaker, you’ll spot a perforated perimeter ring hiding the four (algorithm-focused) microphones, which zero in on vocal commands—so long as the music isn’t playing too loud. A spiffy ring of animated lights provides operational cues, plus buttons for controlling power, volume, pause/play/skip, Bluetooth or Wi-Fi connectivity, and virtual assistant listening or not (for privacy.) A circle-symbol touch spot shortcuts voice requests for those times you don’t want to say the Alexa or Hey Google wake words.

Music in the round

The Portable Home Speaker’s sound dispersion design is very Bose, and it’s one advantage that this speaker has over the more directional Sonos Move. Music looms large, becoming an out-of-box experience thanks to a triangulated trio of passive radiators and a down-firing high-excursion driver that pumps sound into a 360-degree deflector. Also helping the cause is mono-signal correction software that detects and fixes inadvertent phase-cancellation screwups (like oddly recessed lead vocals.)

Plop a Bose Portable down in the center of a patio table, and folks all around the perimeter will be equally entertained. Even more magical, place this puppy in a corner and admire how wall reflections crank up the performance. Bass notes grow, vocals brighten and push forward. What sounded pretty good before now sounds pretty terrific. That’s why a corner table by my bed has become the Bose Portable’s favored landing spot. 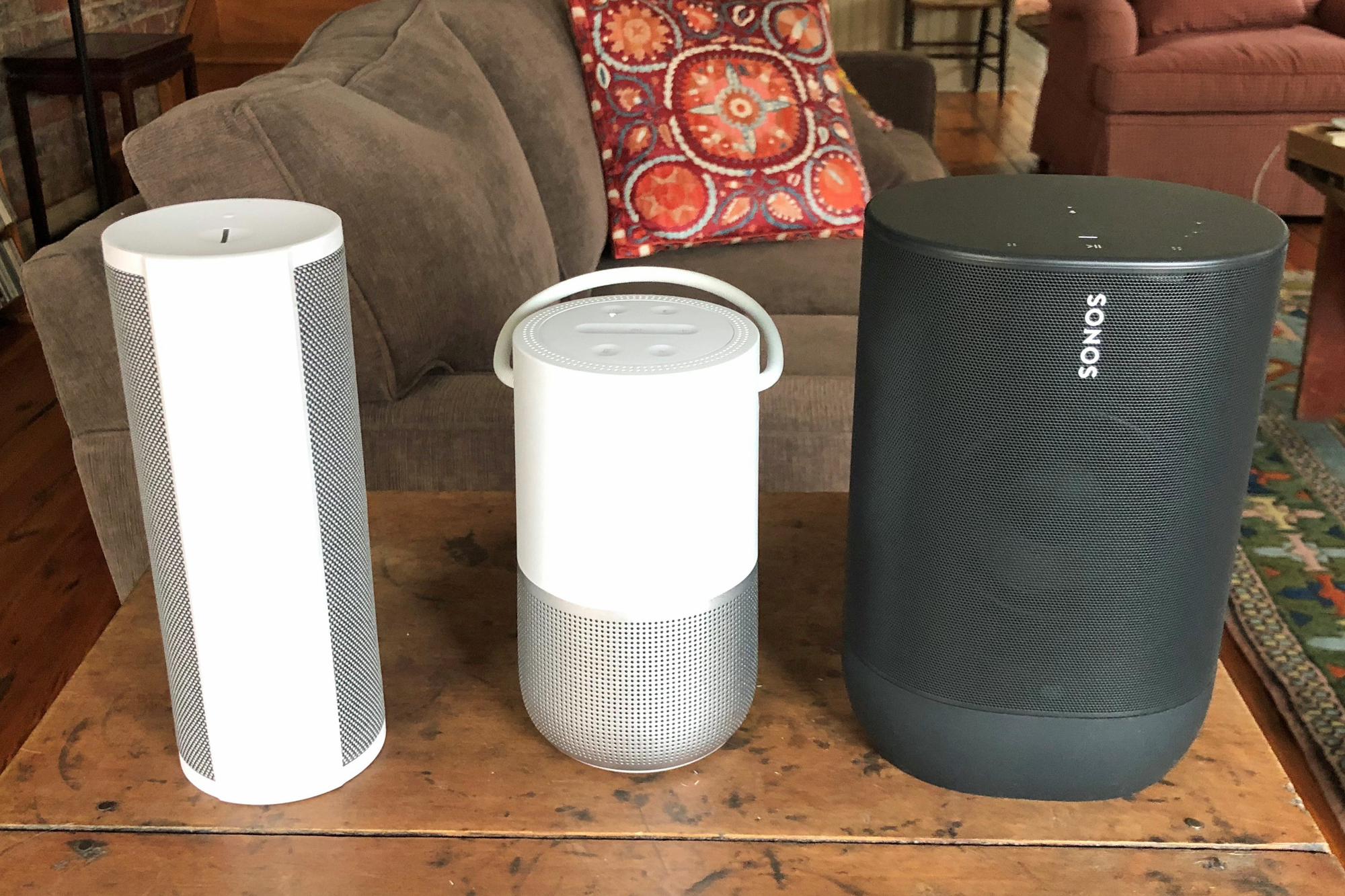 Arguably, the Bose portable’s biggest selling point is group-play connectivity with other speakers in the brand’s Home Speaker family, including the talented Soundbar 500 and Soundbar 700, and Bose’s two compact tabletop smart speakers, the Home Speaker 300 and Home Speaker 500. Now, with this new battery-lovin’ bugger in tow, users can enjoy absolutely full-home coverage, from attic to basement to back yard. The Portable Home Speaker also does a great job sharing the TV audio soundtrack feeding first into one of those Bose soundbars, so you can keep up on the big game while fetching beers from the kitchen.

The Portable’s Wi-Fi sourced signal hangs in there moderately well when waltzing with the music in the great outdoors. I tracked the music playing out my front door and then 70 feet down the block. And despite the extra power drain imposed by voice monitoring and Wi-Fi signaling, this speaker can rock the house on battery power for almost as long as a plain-Jane Bluetooth speaker. I’ve scored as much as 13 hours of mid-volume play out of a 2.5 hour charge, the testing conducted in long sessions of internet radio streaming with my usual gang of faves: British boomer rocker BBC6, New Orleans culture connecting WWOZ, and France’s mainstream jazz stalwarts, TSF-Jazz and the super-arty and eclectic New Sounds (a side project of NYC’s WQXR).

But don’t forget to completely shut down this thing when you’re done listening on battery power; otherwise, you won’t have any juice left the next morning. An internet-connected portable speaker really is a breed apart, with extra power management challenges and equally daunting Wi-Fi-in-transit concerns. On occasion, after being moved, the Bose speaker pauses to regroup. A couple times, Alexa would announce the time and weather, but not play music, offering the excuse “Sorry, that device is offline.” Just once, in two weeks of testing, I was forced to do a factory reset, with guidance from a cheery Bose product specialist based in Chatham, England. He suggested my two Wi-Fi routers streaming at both 2.4- and 5GHz bolloxed the works. Such complications explain why so few voice-activated smart portables have come to market.

For easier charging, Bose Portable speaker buyers can invest an extra $29 for the optional drop-and-go charging cradle that connects to the USB-C cable and wall wart packed in with the speaker. That raises the effective acquisition price to $378. (The $399 Sonos Move includes a similar charging ring as the standard way to charge that rig, as well as to run it on AC power.) Another voice-activated, Wi-fi tuning portable I’ve been comparing—the Ultimate Ears Megablast—has been selling for just $176 with an optional Power Up wireless charging dock priced at $25. 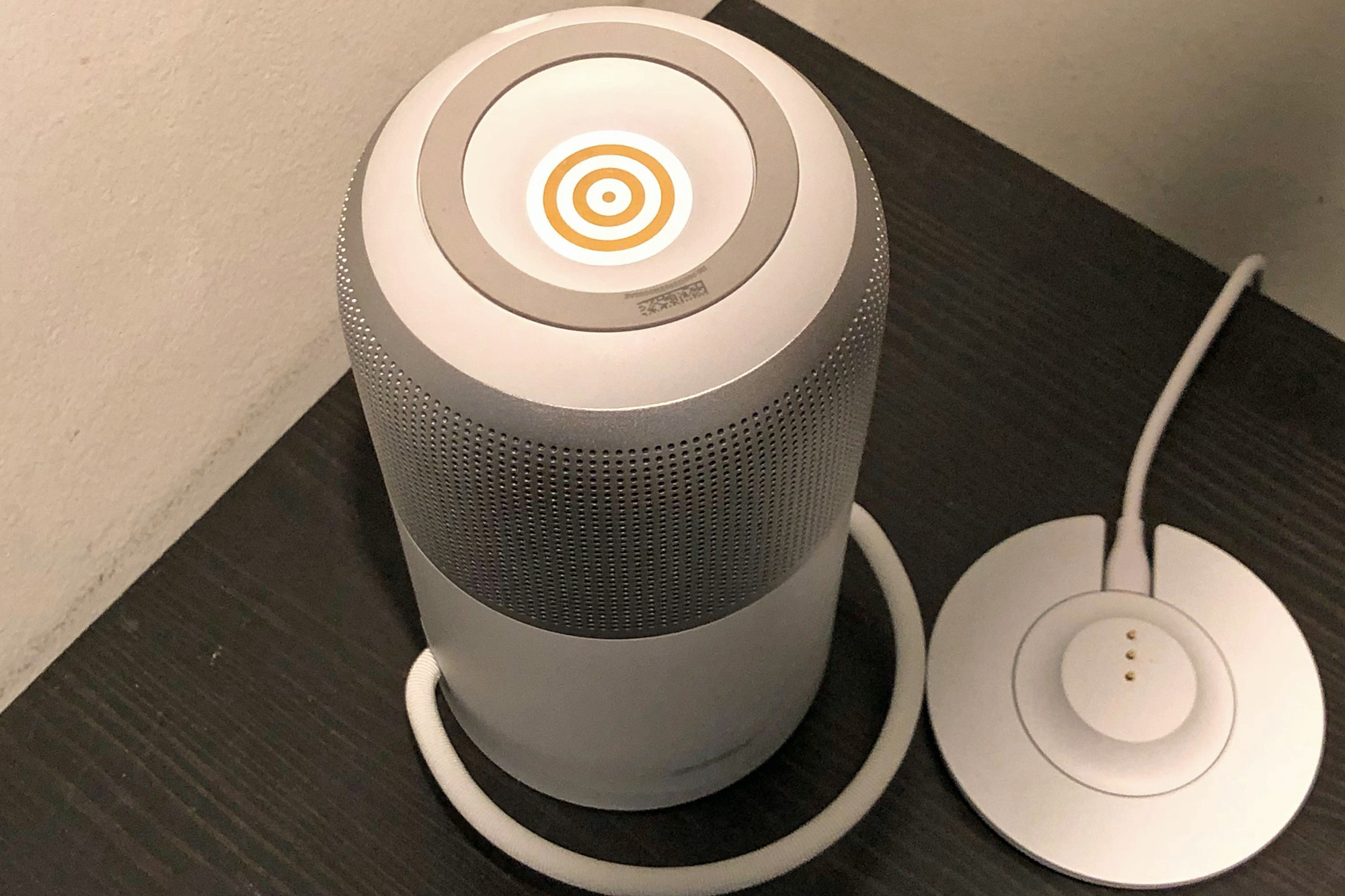 By year’s end, Bose Portable Home users will also be simulcasting music from their smart speaker to one of the less costly, Bluetooth-only battery powered models in the Bose SoundLink speaker line. That would include the Micro, Color, Mini, Revolve, and the Revolve +, which bears a marked resemblance to the Portable. Come 2020, stereo pairing with a second Bose Portable will be enabled after another software update.

Honestly, the Bose Portable Home is neither the brightest and boldest sounding of the new breed of smart portable speakers (that honor goes to the Sonos Move), nor is it the best value going (give that to the UE Megablast). But when not subjected to a direct sonic comparison, the Bose sounds perfectly fine unto itself. And with its status as the lightest, smallest, most user friendly of the bunch—literally liftable by that hoop-shaped handle with one pinky finger—I consider it special. Think the sonic equivalent of the point-and-shoot camera and smart phone that so many of us pocket and deploy for photoshoots, instead of schlepping our bulky SLR, which takes better shots but is a pain to carry around. 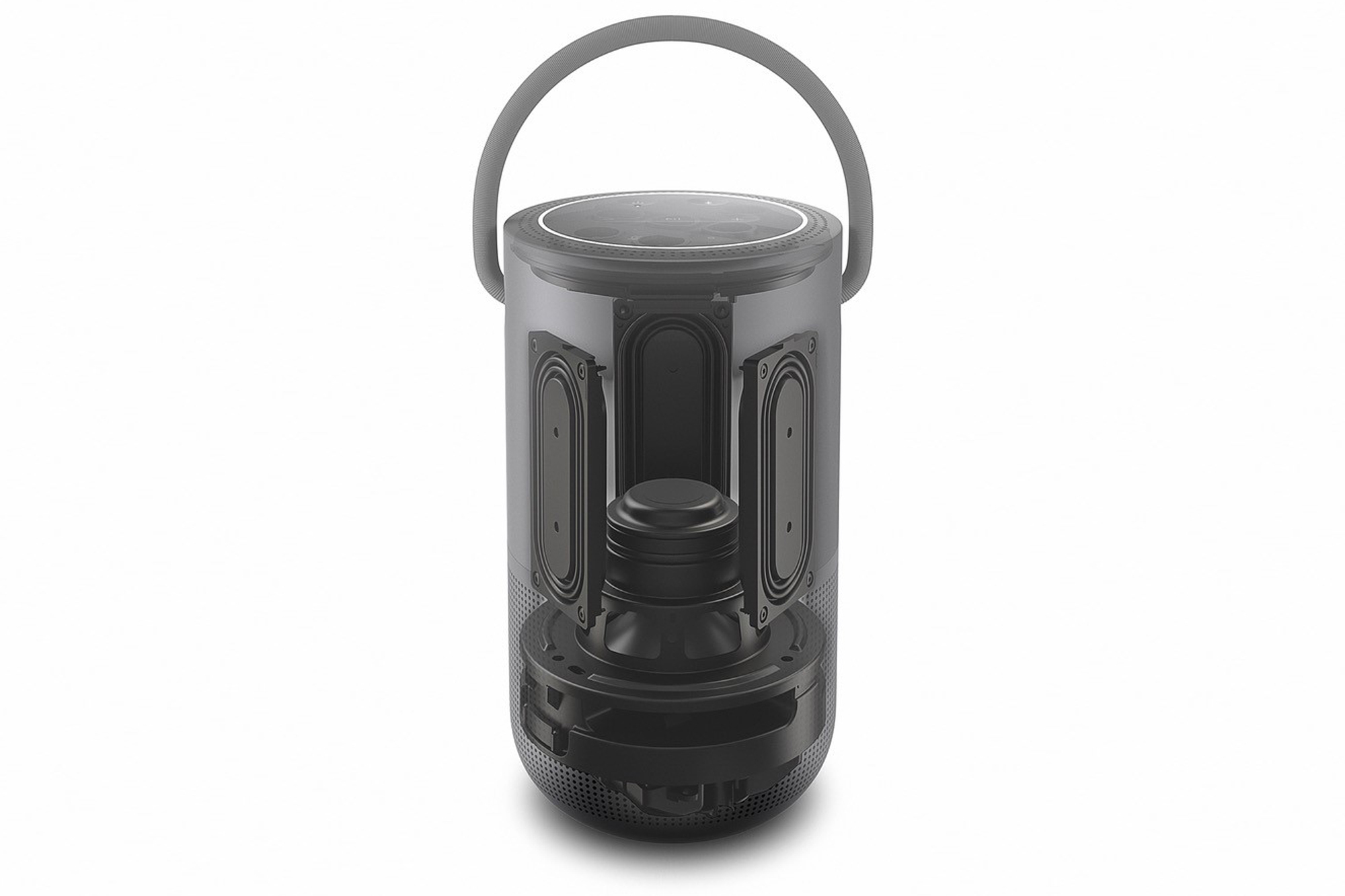 The UE Megablast (two inches taller and three ounces heavier than the Bose Portable) does come with a hook suitable for dangling it off a backpack, but that’s not really my style. On the upside, it offers the best water resistance (being rated IP67, it can be submerged for up to 30 minutes), and the longest running battery—good for 16 hours of playtime between charges.

The chunky 6.75-pound Sonos Move portable is liftable with an indented rear scoop that oddly throws the box’s bottom backward when you grip it. That takes some getting used to. It can survive a mild water jet (it’s rated IP56), its battery is good for 10 hours of playtime, and it has a build so rugged you could probably kick the cabinet down the street without inflicting internal damage.

The Bose is only splash resistant, with an IPx4 rating (the “x” means Bose doesn’t rate its ability to resist dust incursion), and it falls in the middle of the pack in terms of energy efficiency (with that aforementioned 13-hour playtime).

Bose’s Portable Home Speaker also comes up a tad short in “life of the party animal” characteristics. In my testing, both the Megablast and the Move streamed music farther—by an additional 35 feet—from my Wi-Fi router. And both crank it louder—the Sonos Move peaking my sound pressure meter’s needle at a whopping 102dB, while the UE Megablast hit 98dB, 2dB louder than the Bose.

So maybe the Bose Portable Home Speaker can’t drown out a bored motorcycle muffler or an insufferable bore. But if it’s just you two (or a few) hanging out and sonically snuggling, who cares?

The Bose Portable Home Speaker is a personable, user-friendly, voice-activated smart speaker that’s easy to tote, whether deployed outside or to fill the sonic gaps in a Bose-based multi-room audio system.

Previous ArticleIntel wants to win back the process lead from AMD – but will its CPU supply issues spoil its plans?
Next ArticleApple launches AirPods Pro earbuds
Comments (0)

Don't miss a deal at Argos
Best offers at The Home Depot
Discounts, Sales and Deals at Turbo Tax
Save your money with Mobiles
Online-Shopping with Marks and Spencer
Best products at Newegg
Latest Posts