The Aukey SK-M30 Eclipse is one of the best-looking Bluetooth speakers I’ve seen at any price. Taste varies, but in my estimate, it would look right at home on a CEO’s desk, and you could put it there for the nearly ridiculous price of only $50.

Alas, the Eclipse’s emanations more closely match the required financial outlay than its high-end looks. It sounds very good for the price range, but merely average in the grand scheme.

The SK-M30 is a matte-black, flattened cylinder that weighs about 1.75 pounds and measures approximately 8.3-inches wide, by 4.5-inches tall, by 2.5-inches thick. There’s a thin pewter-colored pedestal at the bottom whose front is home to the indicator light and mic (the unit handles phone calls), with the flip side adorned with the 3.5mm aux input and mini-USB charging port. The pedestal and the similarly colored, but shinier passive radiators at either end lend this speaker an air of distinction. Raised Braille-like controls on top of the enclosure consist of plus/next, minus/previous, play/pause, mode (Bluetooth/aux input), and power. Dual 2-inch drivers face forward, and the aforementioned passive radiators are on either end of the unit.

The Eclipse uses the older Bluetooth 4.2 with A2DP (100-plus millisecond latency), but there’s no support for the aptX codec with its 40ms latency, so it’s not suitable for use as an ad hoc soundbar. The 4000mAh battery will run the SK-M30 for around 12 hours (a fairly accurate claim), and charge fully in around 4 hours. Aukey includes both Micro-USB and 3.5mm stereo cables in the box.

Handsome is as handsome does, and as I mentioned, the SK-M30 Eclipse sounds good, if not quite as good as it looks. Given the relatively small size, this was not unexpected.

There’s bass, but I’d describe it as punch bordering on thump. There’s a bit of a deficit somewhere in the very high mids and the top-end that I’d describe as a lack of sparkle. This could be due—at least in part—to the rather heavy grill material, because the high frequencies are more present when you put the unit right up to your ear. 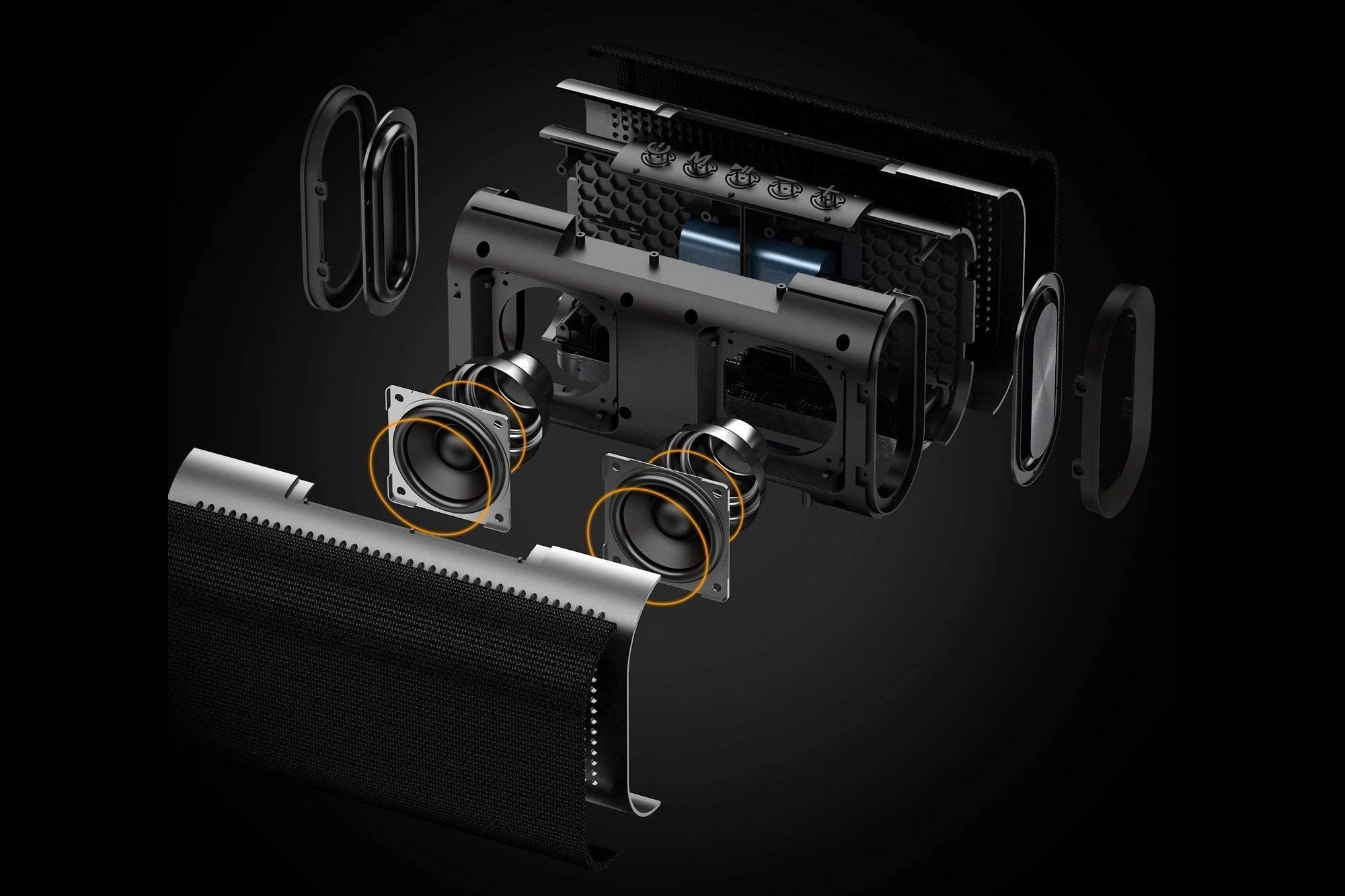 Placement is key with this particular unit as the speakers fire directly forward. There’s audible stereo separation, but since the speakers are close together and seemingly not angled to the sides, the effect fades as you move away from the unit. The drivers’ close proximity could also be partly responsible for the slight deficit in the high end as you move away.

The Eclipse’s 10-watts-per-channel amp pumps out a decent, if not overpowering amount of volume. It will fill a small room, but would probably get lost at a party. There was no distortion that I could hear as the volume increased. 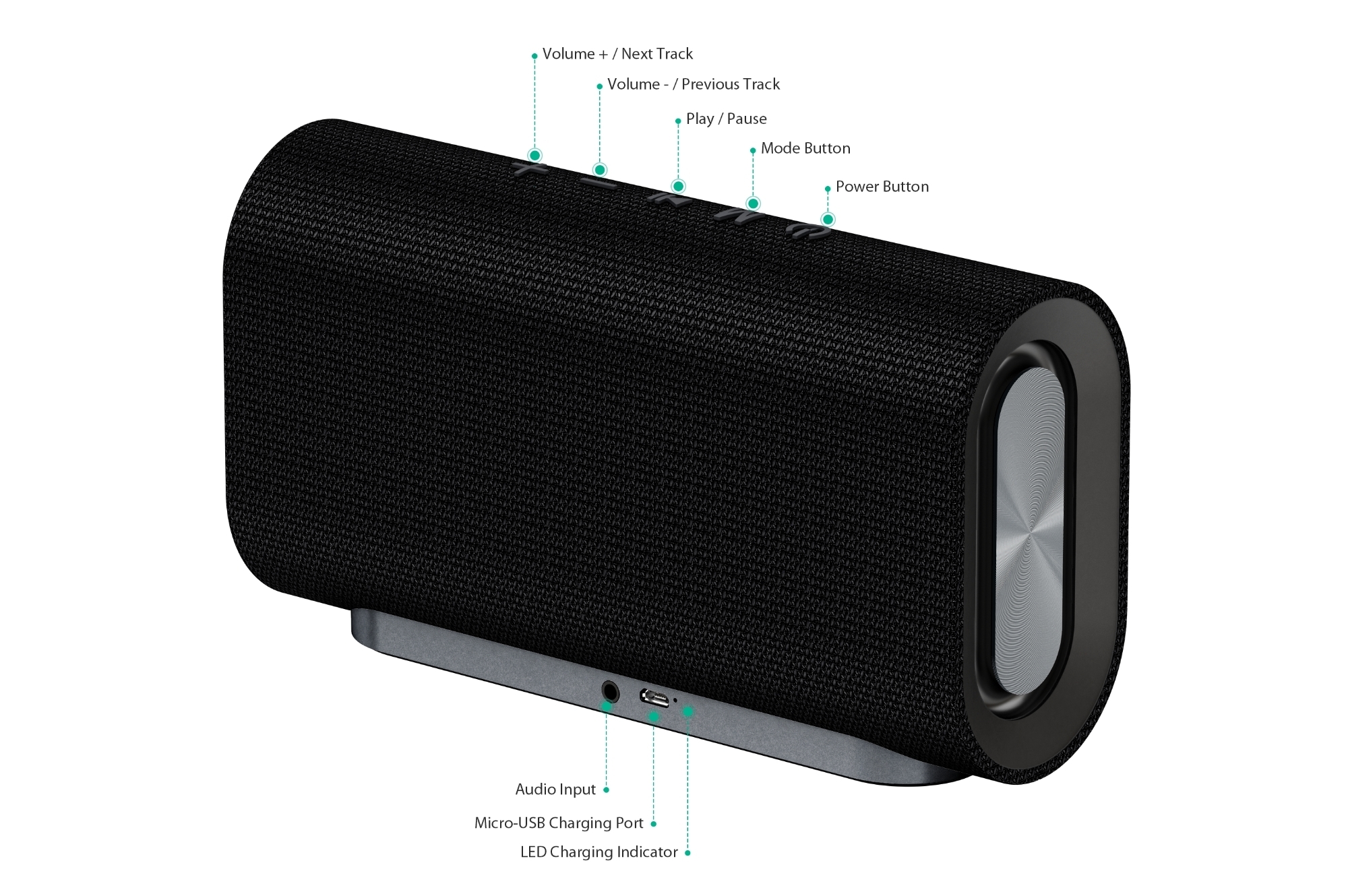 Before I let you go, a quick shout out to Aukey for one of the more pleasant ring tones I’ve heard from a Bluetooth speaker. I actually look forward to hearing it. Alas, the mic doesn’t quite measure up—there were minor complaints from most of the listeners on the other end of my phone calls. I could be heard, but I sounded “tinny” or “at the bottom of a well.” To be fair, this is more the norm than a special fault of the SK-M30.

Note that while I’ve spent several paragraphs telling you what’s not quite right, I’m paid to do that. I’m listening to the SK-M30 as I write this, and having a good time doing it.

A good value for casual listening

Given the $50 price tag and exceptional looks, the Aukey SK-M30 Eclipse is a very good speaker for your desk or kitchen countertop, or any other type of low-volume casual listening.

Few Bluetooth speakers are better designed than Aukey’s SK-M30 Eclipse. The sound is very good for the price, if not on a par with its looks.

Don't miss a deal at Currys
Best offers at H&R Block
Discounts, Sales and Deals at Nike DE
Save your money with Argos
Online-Shopping with Boohoo
Best products at Vodafone UK
Latest Posts