The Asus ZenBook Flip 13 is a beautiful laptop that offers decent battery life, very good graphics, and a lot of pep for most of what you’d do on a small 13-inch convertible laptop.

Unfortunately, you probably won’t remember it for its impressive 11th-gen Intel Tiger Lake Core i7-1165G7 chip, nor its drop-dead-gorgeous OLED screen. Nope, instead you’ll fixate on something it doesn’t have: a 3.5mm analog audio jack.

Yes, the same move that Apple claimed as “courageous” on the iPhone 7, Asus has now done to a laptop. And just as other smartphones followed Apple’s lead, we expect other PC vendors are watching closely to see how users react to this eviction.

We have no idea why Asus did this. While Apple did it to save a nickel in production costs on a $1,000 phone and said it was to “save space,” Asus has plenty of space on the ZenBook Flip 13. In fact, alongside the pair of USB-C/Thunderbolt 4 ports the ZenBook Flip 13 has, Asus fits in a full-size HDMI port as well as a square USB-A port. Maybe if we had to choose we’d prioritize those over an analog jack, but why make us choose at all, Asus? To make up for it, Asus does include a 3.5mm analog to USB-C dongle that uses a 24-bit ESS DAC. It should yield cleaner audio than an analog circuit in a laptop, which is open to picking up interference. It’s a pure digital dongle, so it’ll work on your Android phone as well.

With that bile cleared, we can now talk about just how impressive the ZenBook Flip 13 is. Featuring beveled edges with gold accents, the ZenBook Flip 13 feels and looks like a premium laptop that can run with the best of them. Here are the primary specs:

Ports: Rather than talk about the ports and trigger everyone, we’ll let the pictures tell the story. The left side includes two Thunderbolt 4 and HDMI 2.0. The right side features a power button and a square USB-A 5Gbps port. And no, there’s no headset jack on the back or front. It’s really gone. 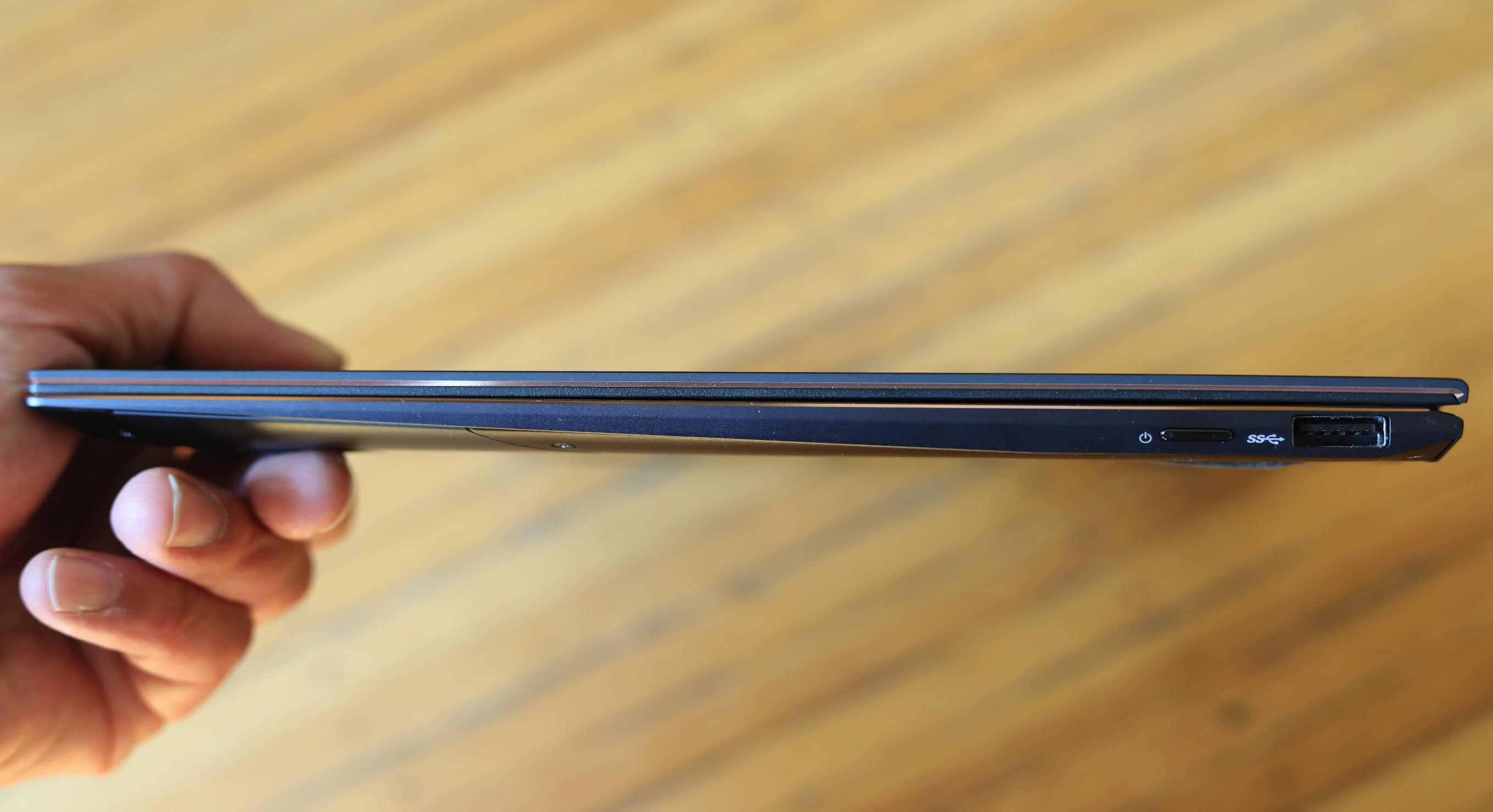 Photographs on a webpage do not do justice to the ZenBook Flip 13’s OLED. We have yet to find such a display that didn’t have us swooning. While a 4K-resolution screen on a 13-inch laptop is probably excessive pixel density, it’s simply beautiful. Unlike conventional backlit LCDs, OLEDs turn off pixels when not in use, creating deeper blacks and, incidentally, saving power. On the other hand, moving to a bright-white background uses more power. OLED is expensive, but it’s nice if you can get it.

Keyboard and trackpad: An unexpected bonus

Keyboard and trackpad discussions aren’t usually very exciting, but the ZenBook Flip 13 carries something very special. Smaller laptops can’t squeeze in a 10-key numeric keypad, so Asus offers a virtual grid that lights up with a long press on the upper-right hand corner of the trackpad. Some will say it’s pure gimmick, while others will say it’s better than nothing. It’s a very individual choice.

The trackpad is compliant with Microsoft’s Precision touchpad requirements for expanded Windows gestures. It’s a larger trackpad, but we had no issues with palm strikes. The keyboard is a little mushy compared to its thin-and-light competition, but we’re still talking subjective taste at this point. The keyboard button assignments are good, with a dedicated button to switch off the camera.

The camera button seems to switch off access to applications, but it doesn’t take the further step of removing the camera from the device manager, which would make it even harder to access. Some laptop makers also slide a shutter over the camera. For most of us, the camera switch will suffice. 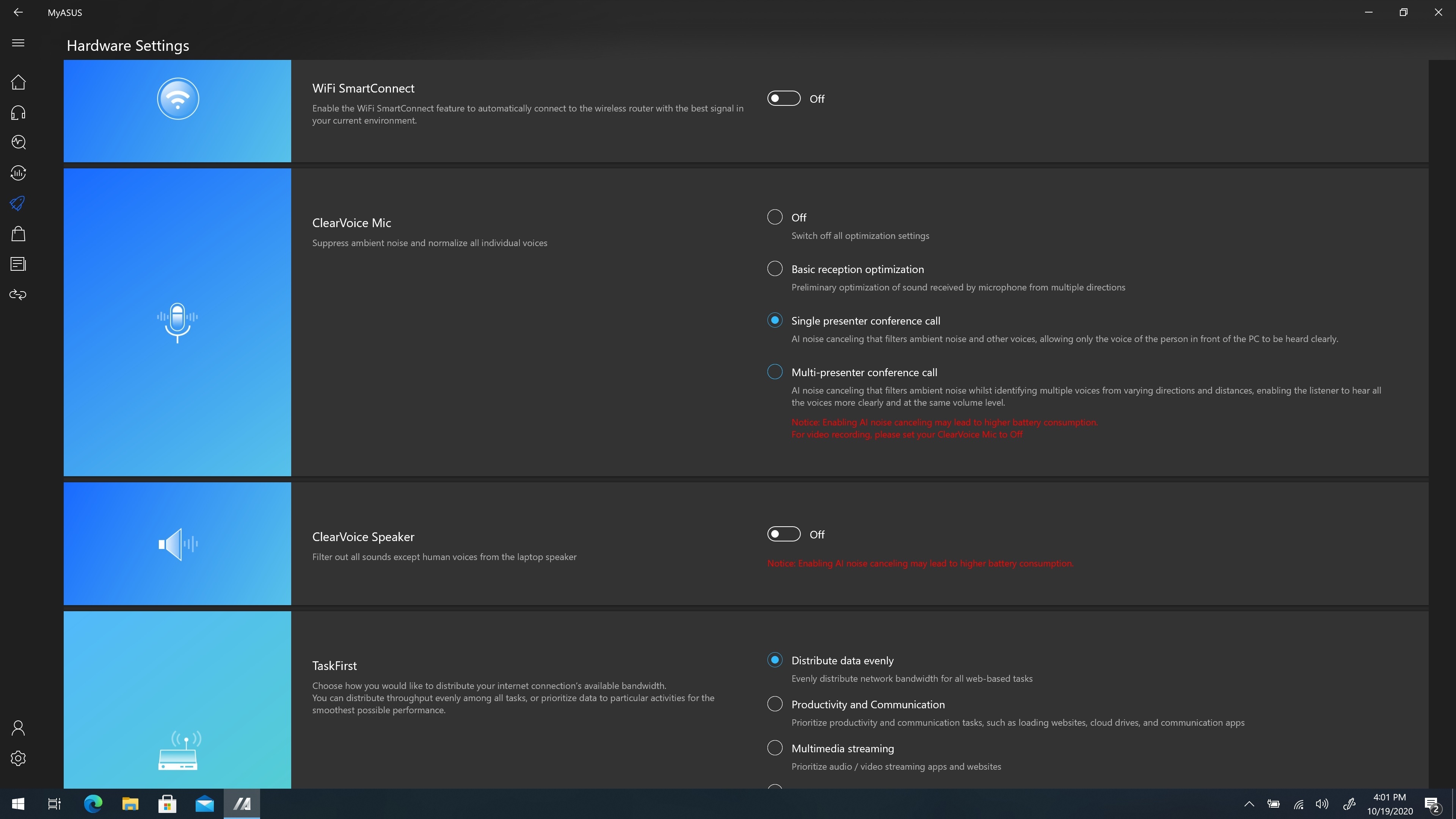 The laptop carries Harman Kardon labelling, suggesting that someone paid attention to the sound coming from the laptop. There appear to be two drivers on the bottom, and both do a decent job. The ZenBook Flip 13 actually sounds better than most gaming laptops twice its weight.

Asus also features AI-based noise cancellation called ClearVoice. We thought it used the noise cancellation available in Intel’s Tiger Lake, but it looks more like Asus proprietary tech. To test it, we played the sound of Ghostbuster’s Ecto1 siren on a phone next to our mouth while recording with ClearVoice turned on. For comparison, we did the same with an HP Elite Dragonfly, which features Bang & Olufsen audio and its own noise-cancellation technology. On the HP, we could still hear the reduced, but distinctive sound of the siren along with our voice. On the ZenBook Flip, the sound of the siren was magically removed.

We should say, however, that even though the sound was removed completely, our voice did suffer greatly with a muffled, digital warbling sound. The laptop also offers to remove background noise from any sound played on the laptop, but we didn’t find that to be as effective.

The ZenBook Flip 13’s webcam isn’t particularly wide-angle. That’s bad for those who want multiple people in a Zoom conference, but it’s good for those who want people to focus on your face rather than the mess in your room. Image quality was fine, but compared to the HP Elite Dragonfly, we found the exposure leaned toward the cold or blue side. The camera itself is part of the IR camera module, so Windows Hello face login is supported.

While we’ve seen Intel’s impressive 11th-gen Tiger Lake in a thicker and larger 14-inch laptop, you have to wonder what happens when you put its newest 10nm chip in a thinner body. The 13-inch ZenBook Flip 13, is just under 9mm thick in its bottom half, or about 20 percent thinner than the Intel reference laptop we used for our Tiger Lake performance preview. For our test, we used the stock out-of-box default settings (blue bar in charts), and also ran tests using the laptop’s Performance mode (red bar in charts), which is willing to push the CPU more for faster results.

First up is Maxon’s older Cinebench R15, which we use to measure CPU performance on all cores. The test is based on a 3D rendering task. It isn’t something you’d typically do on a thin-and-light laptop, but it does scale up with the number of CPU cores in a system.

We didn’t expect the ZenBook Flip to compete with laptops packing AMD’s Ryzen 4000, but overall, it’s satisfactory. While this is the first Core i7-1165G7 we’ve seen, we’re not sure whether the performance is the result of the step down from the top Core i7-1185G7, or if it’s just the thermal limitations of the laptop. If we had to guess, we’d say it’s the latter. 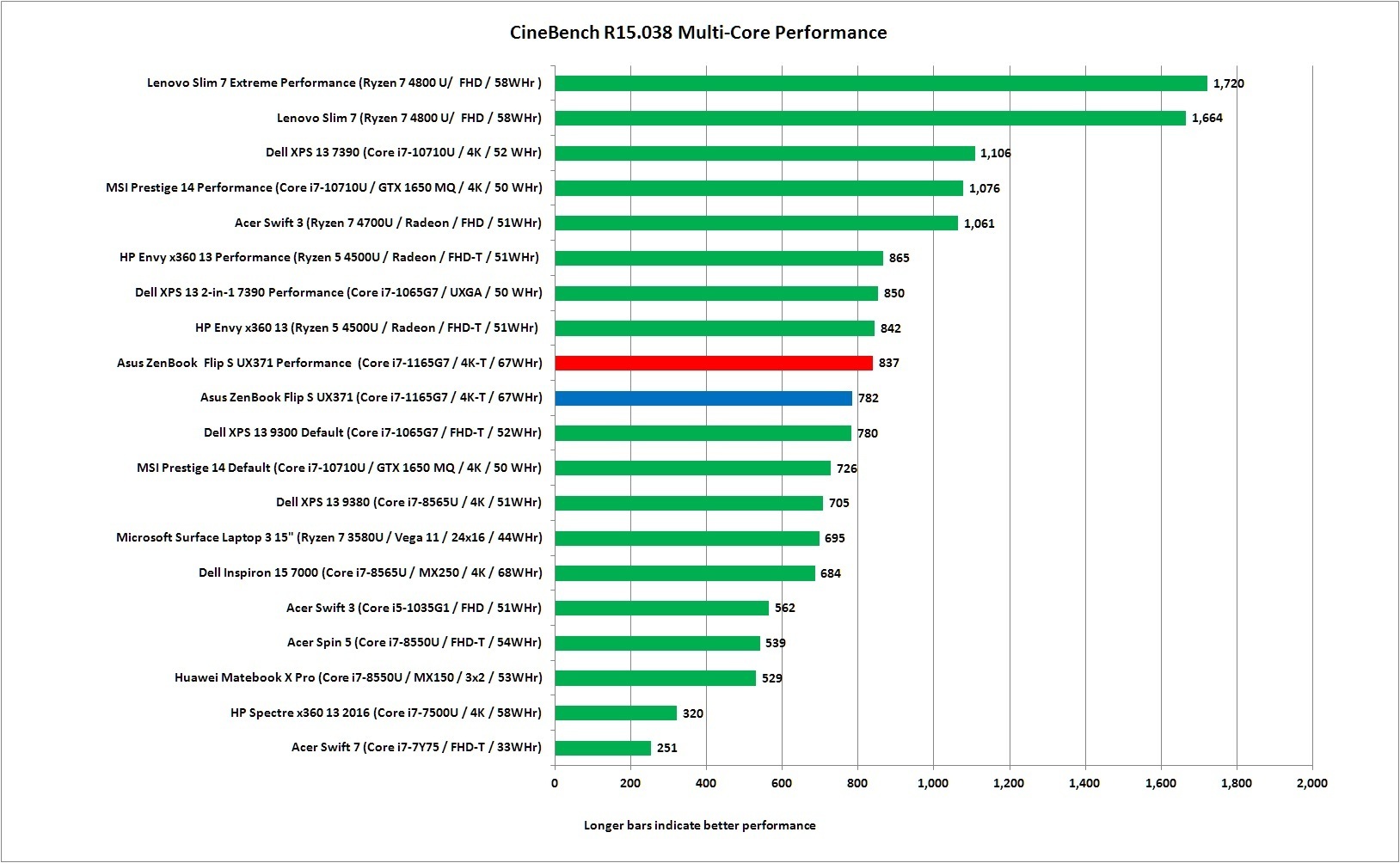 Where it gets interesting is in single-core Cinebench performance, which applies to the vast majority of applications done on a thin-and-light laptop. Any laptop scoring over 2,000 on this test is going to do the job. 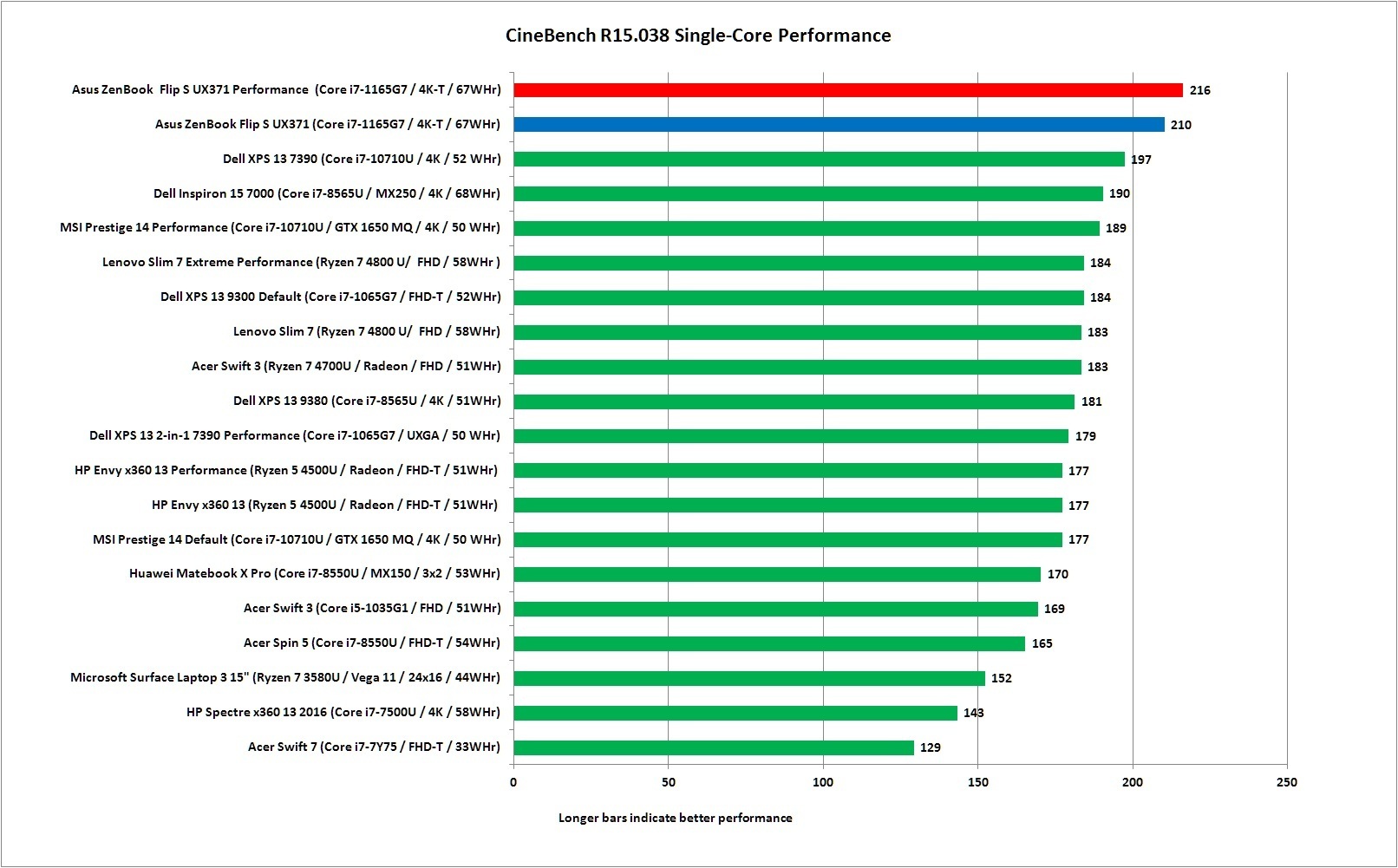 As a CPU text, Cinebench is fairly lightweight and takes two minutes or less to run.It doesn’t tell you what would happen if you ran the laptop on a heavy, long-running task. As modern laptops all slow down as heat builds up, we like to use the free HandBrake utility to convert a 30GB file for viewing on a tablet. It’s a very heavy load and favors laptops with more cores, and laptops that keep the CPU cooler.

The ZenBook Flip 13 struggles more in this test. In fact, it’s a few minutes slower than the very comparable Dell XPS 13 2-in-1, which uses a 10th gen Core i7-1065G7 chip. Dell’s XPS 13 2-in-1 has been among the fastest small convertible laptops since its introduction. Dell also likes to swing for the fences and isn’t afraid to crank up the fan speeds. Even on its performance setting, the ZenBook Flip 13 held back.

This is a reminder that laptops with the same CPU won’t necessarily perform in lockstep. Each laptop has its own personality based on how loud and how hot the laptop maker is willing to make it. 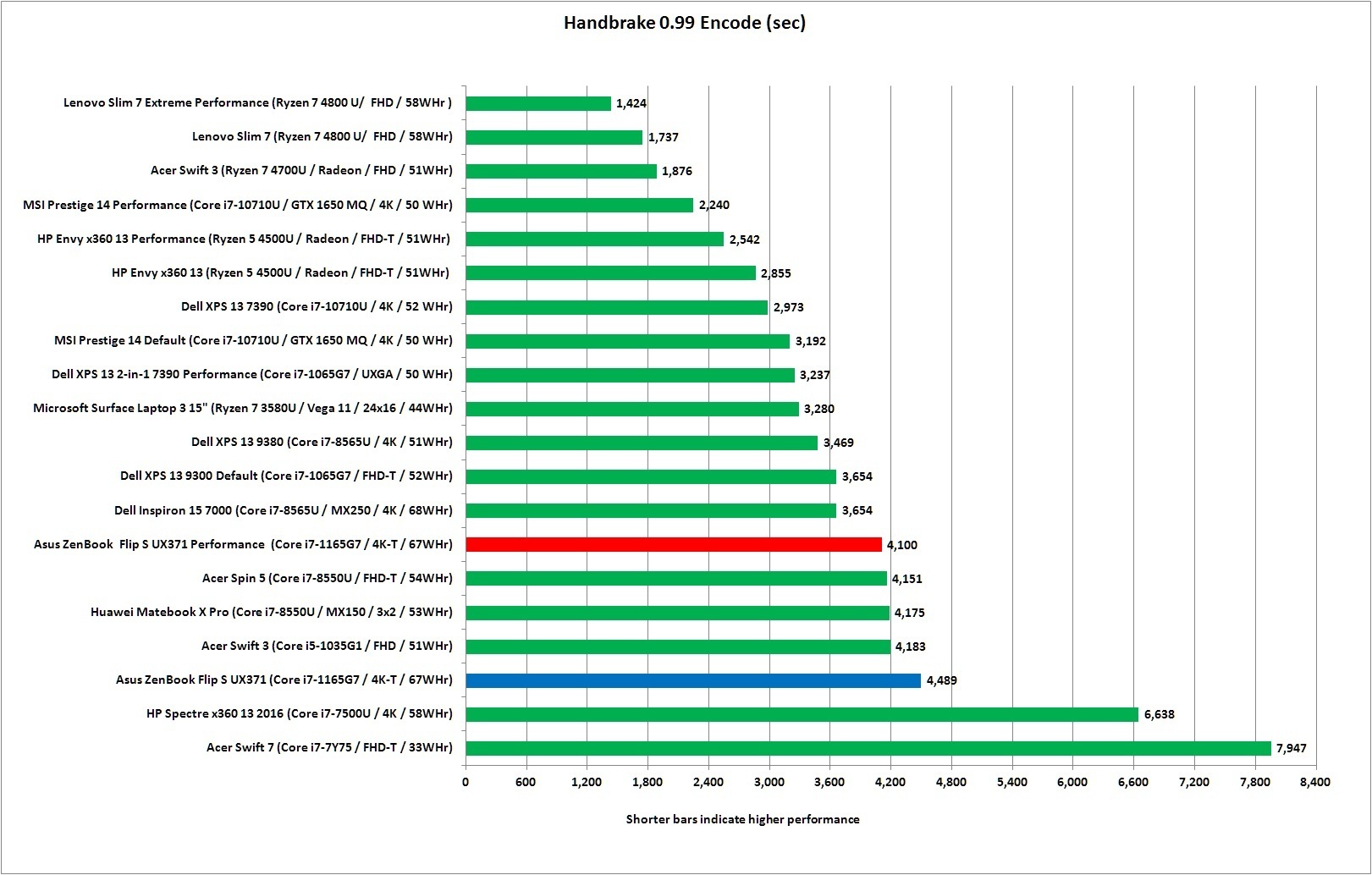 If all you really do push a web browser and Office, none of these numbers should concern you. You can see this in our last test, which uses PCMark 8 Work to simulate “normal” productivity tasks done on small laptops. The ZenBook Flip 13 actually comes out on top, thanks to its higher clock speeds overall in light loads. That’s great for the laptop, but remember that most modern laptops are nearly indistinguishable from each other in common tasks. 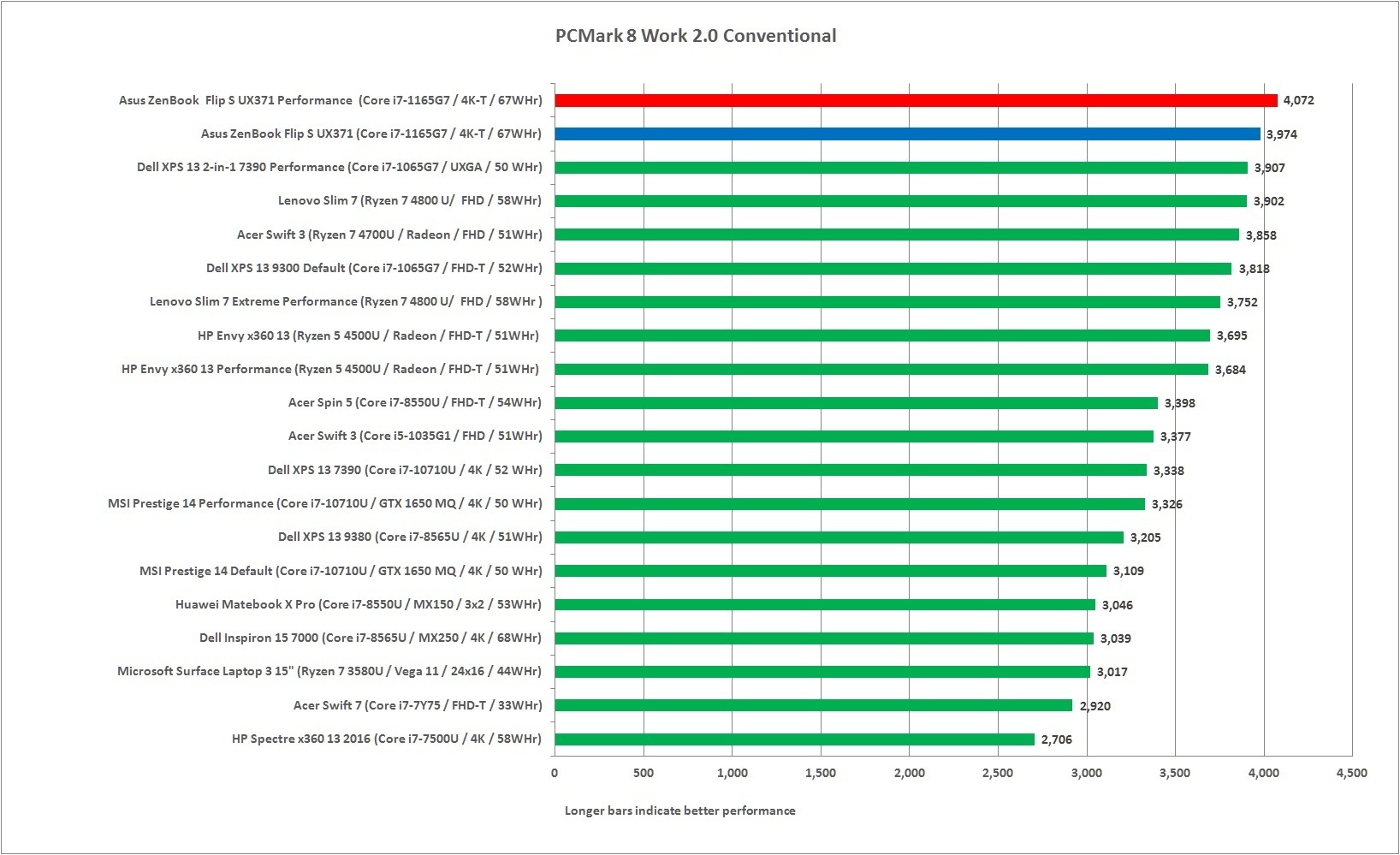 Moving on from CPU-focused tasks, we use 3DMark Sky Diver to look at graphics performance. The gaming chops of the ZenBook Flip 13 may surprise you. Despite being thinner, lighter and smaller than the Lenovo Slim 7, it’s basically on a par with this larger laptop when set to its performance mode. 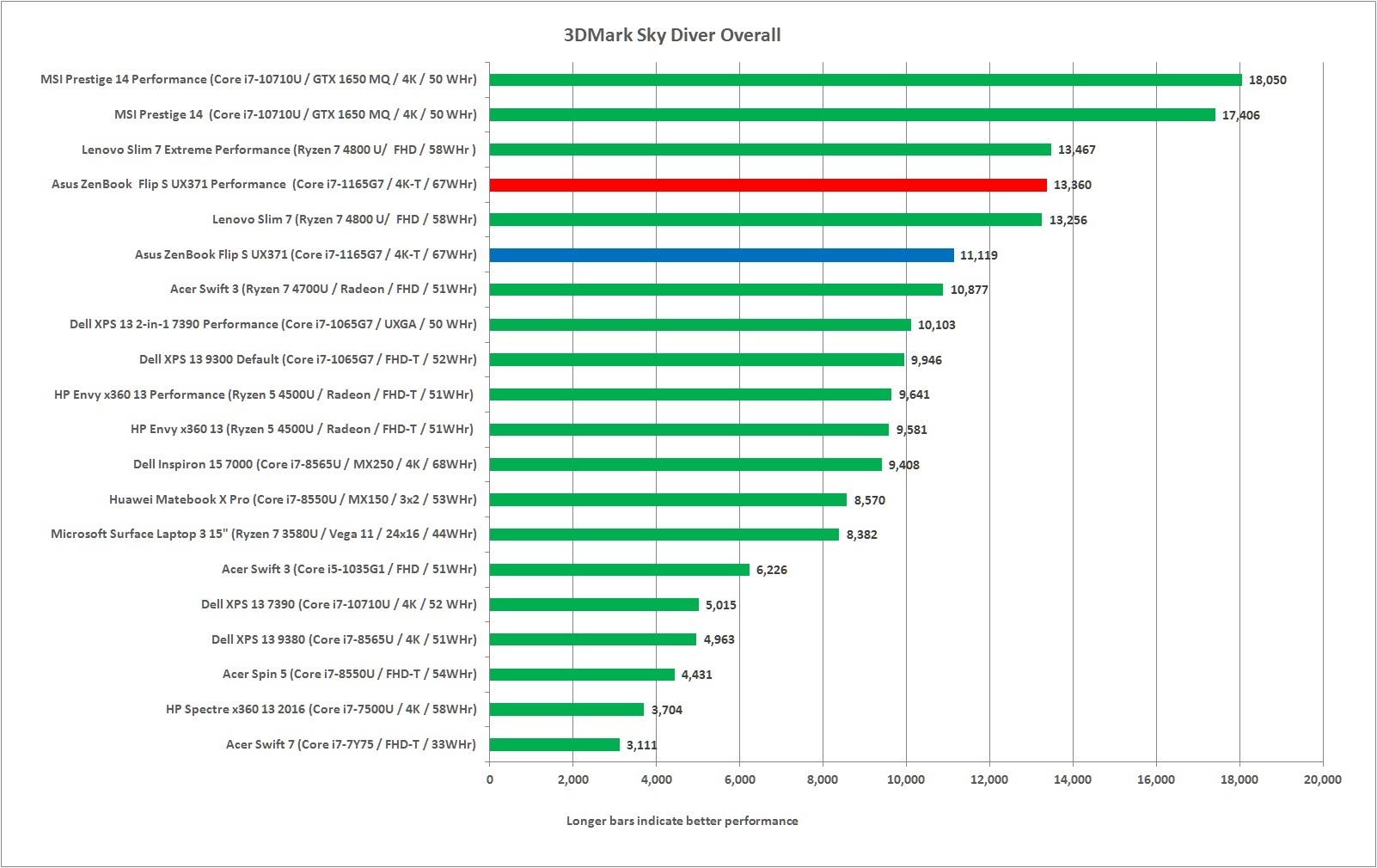 The last test is perhaps the most important one, and that’s battery life. For that, we put the laptop into Airplane mode, with the display brightness set to 250 to 260 nits. Then we loop a 4K video file until the battery dies.

The ZenBook Flip 13’s 8.5-hour battery life may make you yawn, but remember this is with a 4K screen. If you look at the battery chart, laptops with higher-resolution screens tend to cluster at the bottom, while those at the top are all 1920×1080 (FHD) panels.

Asus compensates for the power consumption of that 4K panel with a larger battery. Typical laptops this size give you a battery in the 50-Watt-hour range, but Asus correctly ups the battery capacity to 67 Watt-hours. That larger battery tips the ZenBook Flip 13’s life from what could have been mediocre to decent, for a laptop with a 4K screen. 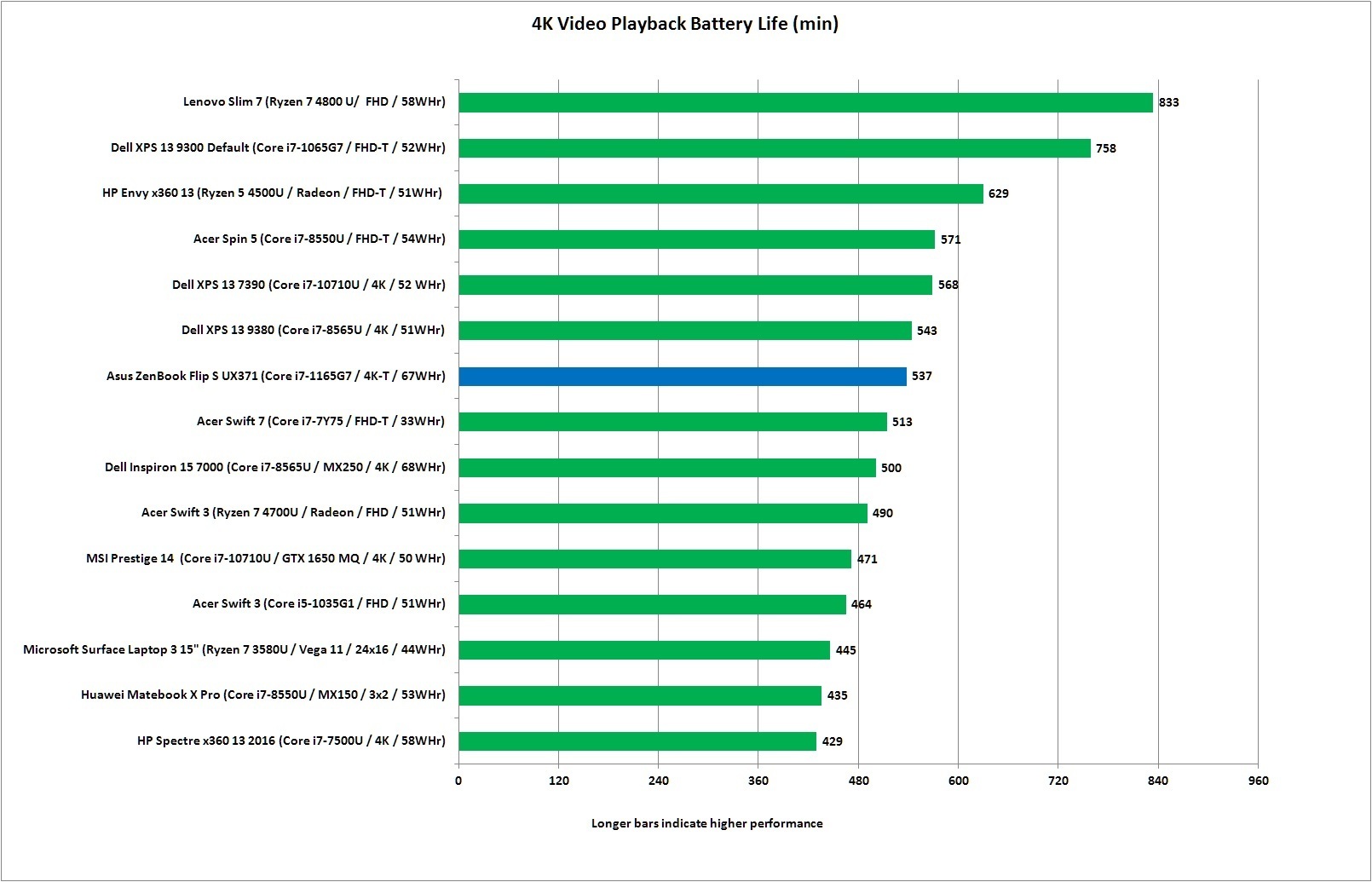 The Asus ZenBook Flip 13 leaves us with three strong impressions. The first two are the spectacular OLED panel (which we’ve already gushed over) and the CPU. Intel’s 11th-gen chips are impressive, even if they don’t knock out AMD’s Ryzen 4000. Multi-core performance could be better, but the single-core performance that represents most of what we’d do on a smaller laptop is strong. Throw in leading graphics performance and you can’t lose.

The third thing is the headphone port. You may not think it’s a big deal, but many laptop makers are watching very carefully to see how people react to this. There’s a very good chance that this could be the beginning of the end of the headphone port on laptops. Overall, the ZenBook Flip 13 is a thin-and-light laptop that screams premium. Of course, that premium feel, performance and features come with premium pricing. At $1,500 it feels a little steep, but you are getting a beautiful screen, standout design, and decent performance. Plus, your laptop doesn’t scream “me too” in a room full of Dell, HP, and Apple.

The Asus ZenBook Flip 13 is a beautiful laptop that offers decent battery life, very good graphics, and a lot of pep for most of what you’d do on a small 13-inch convertible laptop. It’s also the first laptop to remove the headphone jack, and that has us worried.

Don't miss a deal at Vimeo
Best offers at Mobiles
Discounts, Sales and Deals at Ancestry
Save your money with Boohoo
Online-Shopping with The Home Depot
Best products at Newegg
Latest Posts