With its party tricks proving unconvincing, the TUF Gaming M5 is left in the shadow of better mice

As it happens, they’re very different indeed, and not always in ways that favour the slightly more expensive TUF model. Whereas the ROG Gladius is a sturdy mouse that’s big enough to use with any kind of grip, the TUF Gaming M5 takes a more compact approach, at the cost of making itself feel a bit airy, with claw-style and fingertip grips clearly favoured over palm grips.

More positively, this is an ambidextrous mouse, giving another option to often-underserved southpaws; the Asus ROG Gladius’s curves are designed for right-handed users only. It’s not completely symmetrical, as the two side buttons are positioned to be used by a right thumb, but the overall shape is simple and hand- agnostic. If you are left-handed, you might just need to get used to operating these buttons with a sideways ring finger push.

There are some other small touches that help the TUF Gaming M5 avoid feeling like a throwaway travel mouse. On both the left and right sides, there are visually interesting pattern grips, and the notched scroll wheel design makes it easy to find and flick. It has a similar bump-bump-bump sensation to the ROG Gladius, making scrolling feel decisive and helping to prevent accidental overshooting.

There’s also a large dpi switching button, the unusual arrowhead shape of which ensures that it’s quickly findable by touch, even if you’re not yet familiar with the feel of the mouse in general. Once again, this toggles between two sensitivity settings – 400dpi by default and 1,600dpi – and, despite this not being part of the ROG line-up, you can use the ROG Armoury software to set precise dpi levels to anywhere between 100dpi and all the way up to 6,200dpi.

The latter is 200dpi lower than the ROG Gladius’s ceiling, but it’s still rather too over-sensitive for our tastes. We’d only be compelled to whack it up much higher than 1,600dpi if we were using a particularly vast monitor; on smaller and medium-sized screens, including high-resolution ones, the default settings are enough to show the optical sensor doing a fine job. 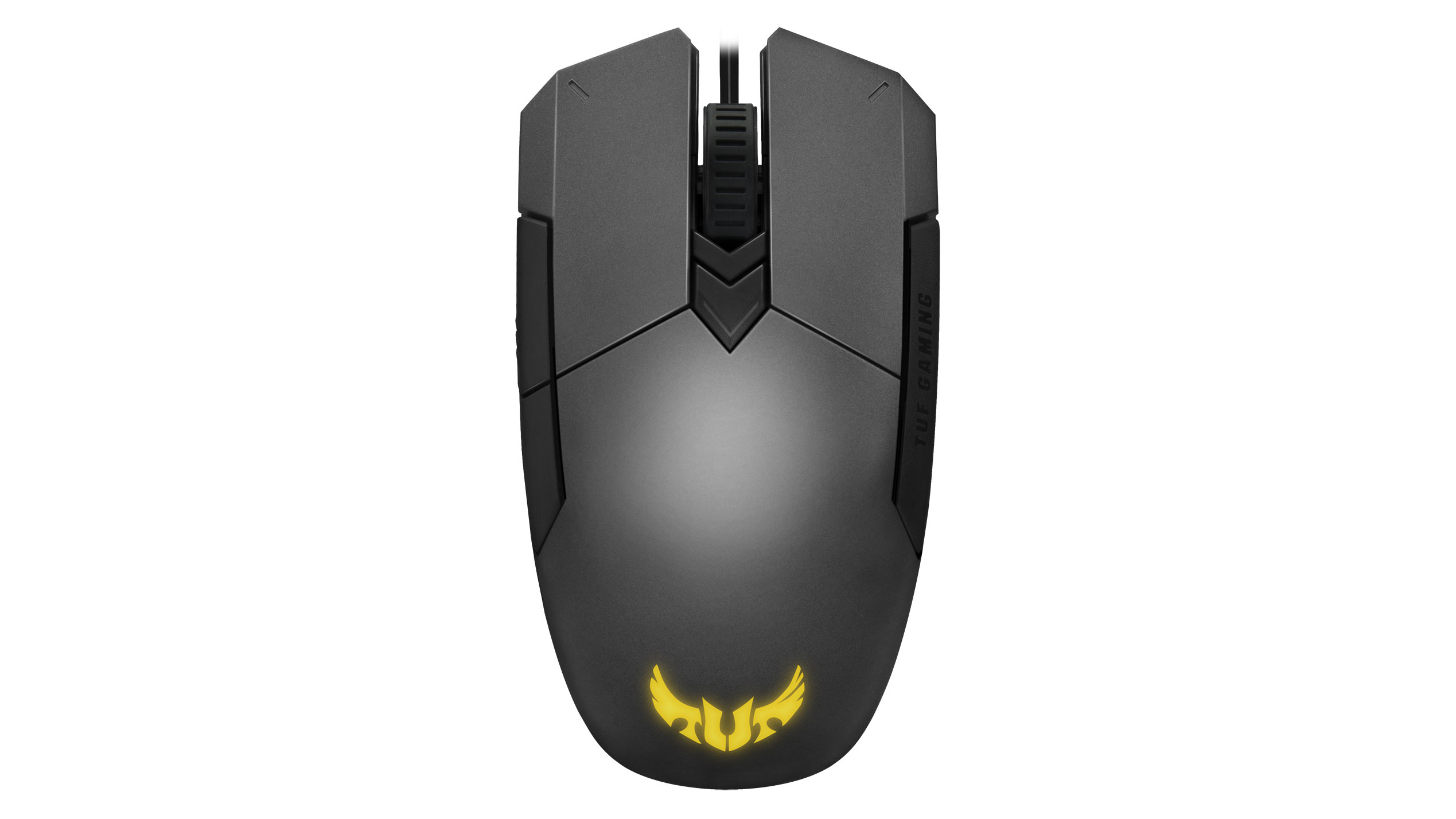 Even with all this, however, spending time with the TUF Gaming M5 causes some problems to bubble up. The first and most serious is the shape. It’s clearly not made for those with large hands, or even those with smaller hands that prefer to rest the full length of their palm and first two fingers on top – which by itself isn’t necessarily a flaw, as all mice don’t need to accommodate all grip styles. The real issue is how it’s been sculpted at the sides: the top of the mouse is wider than the bottom and the sides are only very slightly concave, so there’s essentially nowhere to let your thumb and fingers hang. Compare and contrast to the Cooler Master MM830, and its big, comfortable thumb rest.

The textured grips should help with this, but they’re only made of plastic, not rubber like on the ROG Gladius, so there’s not actually that much grip at all, especially if your hands get sweaty.

On that note, Asus has treated the TUF Gaming M5’s shell with a coating that makes it more resistant to perspiration and abrasion. While this makes it seem more scratch-resistant than the ROG Gladius – keeping in mind a fairer test would be to compare with an untreated mouse after a matter of years, not days – this is the only notable way in which the TUF mouse is, in fact, ‘tough’. It’s unnervingly light, and a lot of parts outside the main shell are made of cheap-feeling plastic. The thumb buttons, in particular, have a nasty, insubstantial flimsiness to them.

The main source of the TUF Gaming M5’s premium credentials isn’t its durability, it’s the less practically useful RGB lighting. This is, to its credit, well supported: the TUF logo can be lit up in one of 16.7 million colours or set to cycle through a handful of them, depending on what you choose in the Armoury software. It also uses Asus Aura Sync to match the lighting of any other compatible hardware in your system, be it a motherboard, graphics card or purpose-made addressable LED strips.

Still, it’s hard to get excited about an RGB logo when its positioning means it’s going to be obscured by your hand most of the time. Armoury is much better used for configuring dpi settings, button bindings and macros; again, the TUF Gaming M5 deserves credit here, even if this is an entirely shared feature with the ROG Gladius. Changing dpi, polling rate (up to 1,00MHz) and button response is just as quick and easy as it is with the other Asus mouse, so you can get the TUF Gaming M5 performing exactly how you like it.

This high-quality software goes a long way towards making up for the design missteps, but ultimately there are few reasons to buy the TUF Gaming M5 when the ROG Gladius exists. It’s only unshared qualities are its ambidextrousness and its RGB lighting; you get the same configuration flexibility with the ROG Gladius, which also happens to be more comfortable, more customisable and a couple of pounds cheaper. The Gladius also adds a carry case and a pair of detachable cables; all that comes in the TUF Gaming M5’s box is the mouse and the manual.