When a keyboard manufacturer comes up with its own mechanical switches, the results might be an improvement but conceptually won’t be too different to what came before. By contrast, the TUF Gaming K7’s switches mix things up by replacing the usual mechanism of registering inputs – two metal pieces coming into contact – with a tiny beam of light. When you press down hard enough to meet the actuation point, the beam of light is broken, recording the input up to 25 times faster than a conventional mechanical switch, according to Asus.

Even if that’s accurate, most mechanical keyboards are already so fast and responsive that the difference is negligible. Indeed, we never felt the TUF Gaming K7 was noticeably quicker than the ROG Strix Flare, Roccat Vulcan 120 Aimo or Thermaltake X1 RGB. If you’re a passionate gamer looking for hardware to give you a competitive edge, don’t expect this keyboard to gift you winning streaks.

Nevertheless, it’s not like Asus has wasted its time coming up with these ‘optical-mech’ switches. Just because they’re not tangibly faster doesn’t make them any slower either, and the pin-sharpness of the TUF Gaming K7 remains one of its greatest strengths. That goes for typing as well as games.

We tested the ‘tactile’ version of the TUF Gaming K7, which uses optical-mech switches that include a little bump and audible click for added feedback. There’s also a ‘linear’ version, which uses the same light beam-breaking technology, but lacks the bump and click.

This makes the two switch variants equivalent to Cherry MX Blue and MX Red switches respectively, although the tactile switches we’ve been using have a bit of MX Speed Silver DNA as well. Actuation force is 47g, almost right in the middle between MX Blues and MX Reds, but more interesting is the mere 1.5mm actuation point and 3mm total travel distance. Both are, in the style of MX Speed Silvers, shallower than MX Blues, which can result in a faster feel if you’re used to always bottoming out a keypress.

For both gaming and rapid touch-typing, the advantage over MX Blues is clear, and we enjoyed the TUF Gaming K7’s sense of agility in much the same way as we did the Vulcan 120 Aimo and X1 RGB. But while the tactile bump is good for general desk work – even if it’s on the gentle side – the clacking sound might make you think Asus has overdone it.

These might well be the loudest modern mechanical switches we’ve ever used; a decibel meter held 15cm away recorded them as high as 58dB, louder than an MX Blue-equipped HyperX Alloy FPS. Their clicking is also higher pitched, so is more likely to cut through the ambient sound of a shared office.

Used alone, it’s not as anxiety-inducing, so might work in a home office. It’s still a bit too loud for undisturbed gaming, however: we could still hear the clicking through a set of active noise-cancelling headphones. The simple solution would seemingly be to just get the linear switch version instead. We haven’t tested this so won’t hold forth about it too much, but keep in mind you won’t just lose the clicking, but the tactile bump as well. 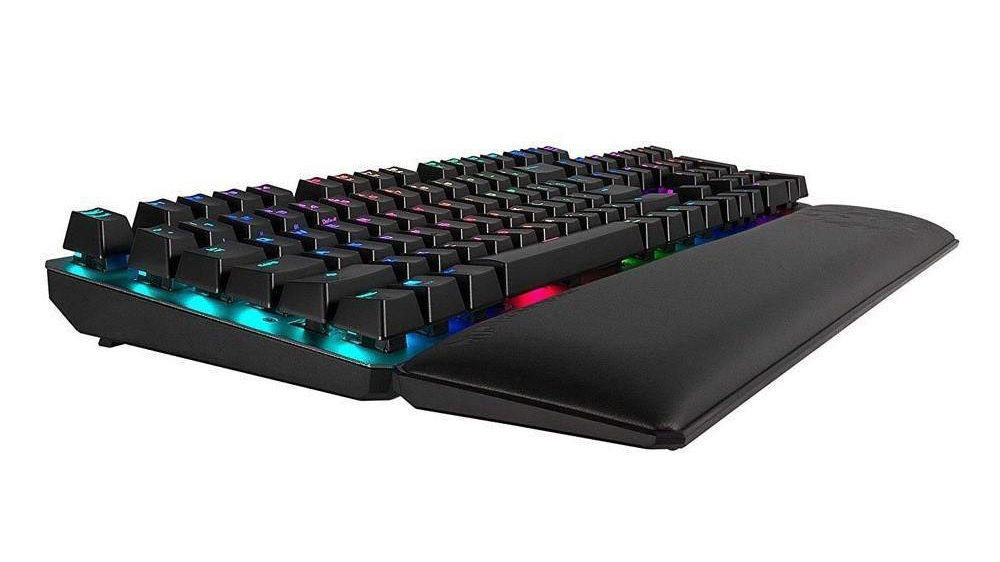 Besides, there are already lots of good linear-switch gaming keyboards, so the TUF Gaming K7 would need something else to be worth considering. Luckily, Asus hasn’t been stingy with supplementary features. Perhaps the most attractive is its waterproofing: it’s protected against dust and water to the IP56 standard, so spilling a drink over it won’t spell doom. We covered it in tap water, twice over, and it still worked completely fine afterwards.

Like any keyboard with raised keys, it’s a bit of a pain to dry, but going through a few paper towels is a vastly preferable outcome to destroying your expensive new peripheral with an errant beverage.

This keyboard also has the best wrist rest of all the models in this round-up. It’s properly padded with foam and covered in leatherette, rather than just being a plank of soft-touch plastic. As such, it’s almost luxuriously comfortable. We just have one, relatively minor, issue with the rest: it sticks to the bottom edge of the TUF Gaming K7 with magnets, but doesn’t clip or clamp the underside, so moving the keyboard around can cause the rest to slip out of position. Again, however, it’s not a serious problem.

Sadly, while the TUF Gaming K7 goes above and beyond on some extras, it’s also lacking in others. It doesn’t have dedicated media controls, USB charging or pass-through ports, a detachable or braided cable or any 3.5mm audio jacks. If it weren’t for the wrist rest, it would look positively basic next to its ROG Strix Flare stablemate.

At least both Asus keyboards share a quality in their versatile backlighting and key configuration. In fact, the TUF Gaming K7 has the same choice of lighting effects as the ROG Strix Flare, and you can also customise them in the same Armoury desktop software. You can also set up macros on the fly, although again there are no dedicated macro keys.

Since the ROG Strix Flare has a better range of onboard features, similarly high typing and gaming performance, and – besides a lack of waterproofing – a nicer design, it’s our favourite of the two. The TUF Gaming K7’s unusual benefits make it a decent alternative, albeit one that – if you choose the tactile version – is most considerately used alone.

Previous ArticleAMD Ryzen 5 3500X and 3500 leaks highlight speed differences between the CPUs
Next ArticleFitness buffs: Tell us how you like your Samsung Galaxy Watch Active
Comments (0)

Don't miss a deal at Bodybuilding
Best offers at Sky
Discounts, Sales and Deals at Groupon
Save your money with Carphone Warehouse
Online-Shopping with Virgin Media
Best products at Turbo Tax
Latest Posts