The Asus Chromebook Flip C436F is a superb Chromebook, but it is a little pricey

If there’s one thing the Asus Chromebook Flip C436F proves, it’s that Chromebooks are growing up. It’s been a slow and painful process and Google has had to drag the industry kicking and screaming along with it, but there is finally a good choice of premium laptops running Google’s minimalist OS.

And the Asus Chromebook Flip C436F demonstrates precisely why this is a very good thing. Not only is this among the fastest Chromebooks we’ve ever seen, but it’s also a very good laptop in its own right, with specifications and usability that rival the best Windows 10 laptops from the biggest manufacturers.

What do you get for your money?

It’s very slim and lightweight, measuring a mere 13.7mm thick when closed. The very slim bezels surrounding the display make it feel small for a laptop with a 14in screen. It tips the scales at a mere 1.2kg and it has a 360-degree hinge, which means the display can be pushed back all the way around so it folds flat against the bottom of the laptop.

It all feels very solidly made and it’s handsome, too. There’s no play in the hinge, which feels very smooth indeed, nor much give or twist in the chassis. And it looks fantastic. The model that’s going to be sold in the UK has a white pearlescent finish to the lid, set off beautifully by chrome effect hinges and a finely perforated grille at the rear of the machine for venting heat.

As for connectivity, that’s not too bad, either. There’s a pair of USB-C ports, one on each side, which can be used for charging and connecting the machine to external displays and other peripherals. The 3.5mm headphone jack is found on the left edge and there’s a microSD slot on the right edge as well, although you shouldn’t need to expand the storage by much as there’s a 256GB SSD inside. 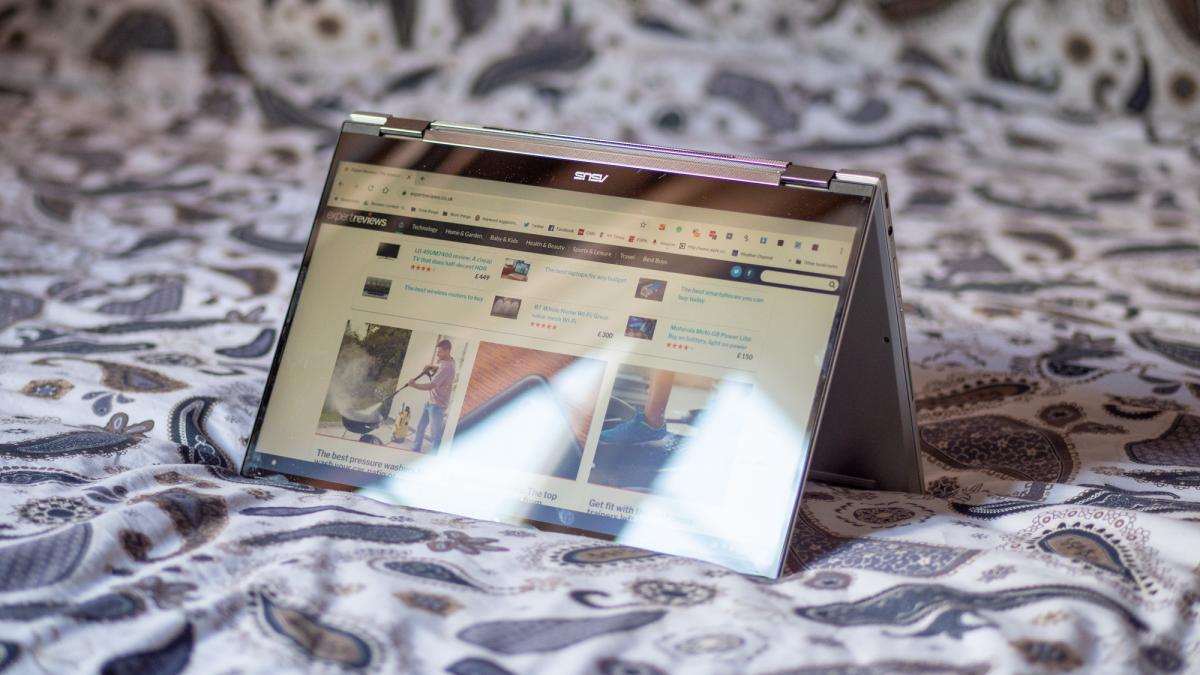 The keyboard isn’t the best we’ve used on a Chromebook; that honour belongs to the Google Pixelbook Go. The keys don’t have a huge amount of travel and the feedback is less positive than I’d like, but it’s spacious enough and there are no big problems with layout. There’s no Caps Lock key, but that’s an issue shared by all Chromebooks, and you can activate that by pressing the Alt and Search keys together.

The keyboard is backlit, which helps when typing in low light. However, the transparent lettering on each key can make it difficult to read them in bright natural light, which was a problem when the sun shone directly through my office window. One bonus is that it has a fingerprint reader positioned in the top-right corner, just above the Backspace key, which makes logging in quick and easy. 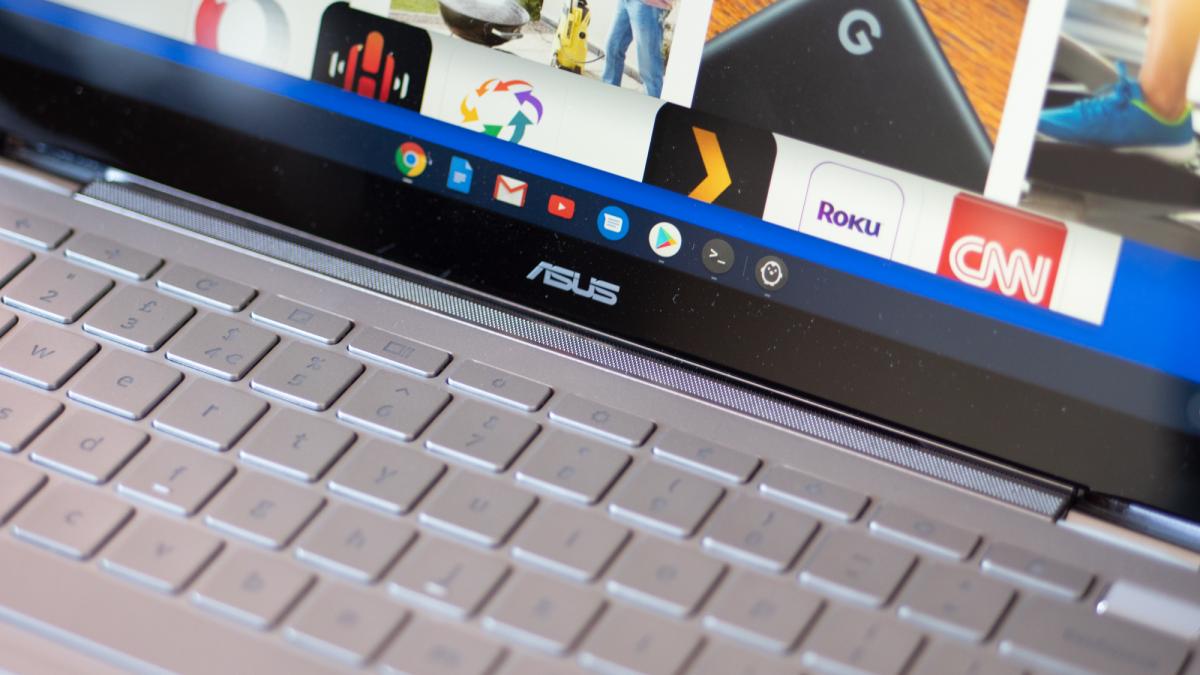 Despite the small size of the laptop, it comes with a sizeable touchpad, measuring 130 x 66mm and occupying around 40% of the width of the wristrest. I found this both sensitive and reliable, and its size makes three- and four-finger multitouch gestures easy to perform.

There’s also a stylus in the box for sketching and taking notes on the touch display. Alas, this wasn’t supplied with my review sample so I can’t say how effective it is, but I do know there’s nowhere to stow it on or in the laptop, which is another minor irritation.

How about the screen and speakers?

The screen is a peach; in fact, I prefer it to the Google Pixelbook Go’s display. It measures 14in across the diagonal, has a resolution of 1,920 x 1,080 and, since it uses IPS tech, viewing angles are great.

Measuring with our test equipment, it performed well too. Peak brightness reached 303cd/m² and colour coverage is good, covering 97.7% of the sRGB colour gamut with pretty decent colour accuracy. This display won’t play HDR material, more’s the pity, but it’s still a great laptop to watch TV and films on. 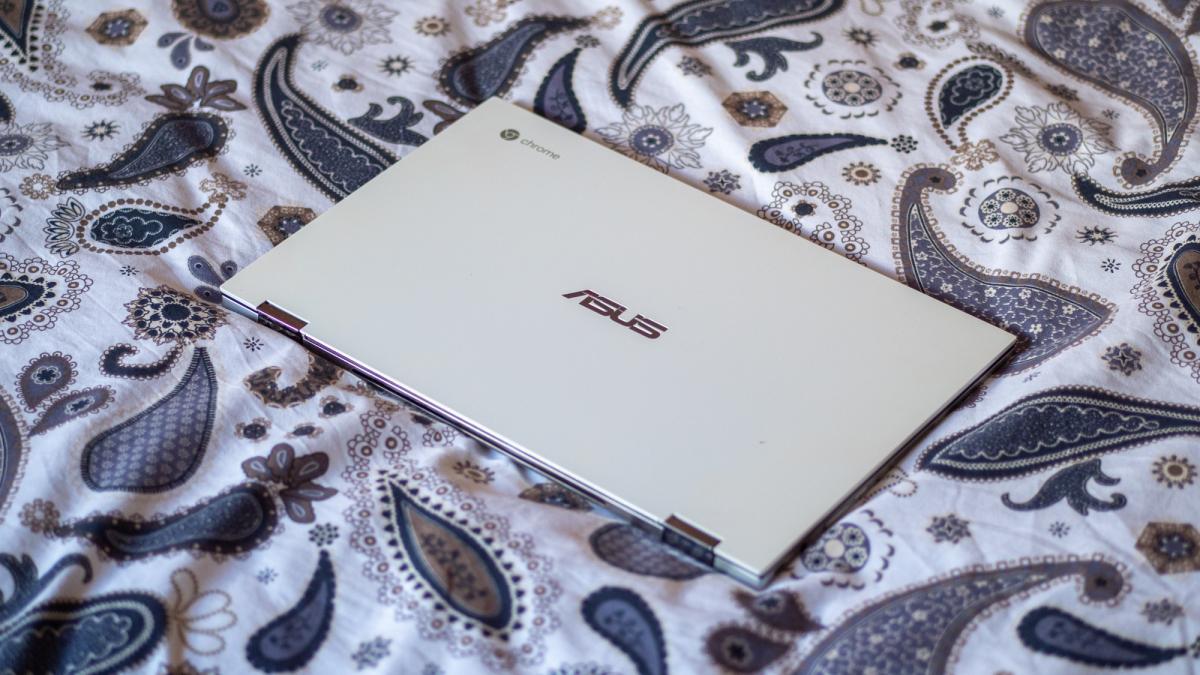 And you won’t have to don headphones every time you do, either, because the stereo speakers – located on the left and right edges of the laptop’s base – deliver full, clear audio. There isn’t much in the way of bass, but you get enough warmth to make watching the news or a documentary perfectly pleasant.

What about performance and battery life?

It’s hard to directly compare the performance of Chromebooks with that of other laptops because they work in a very different way. However, it’s still possible to make a comparison between other Chromebooks and, by this metric, the Asus Chromebook Flip C436F is a winner.

In a selection of browser-based benchmarks, it performed far better than any other Chromebook we’ve tested, including the Core i5-based Google Pixelbook Go I reviewed earlier in the year.

That’s mainly due to the fact that the Asus employs a 10th-generation Intel CPU, where the Pixelbook is stuck on 8th-generation chips. Here are some results from the tests we ran: 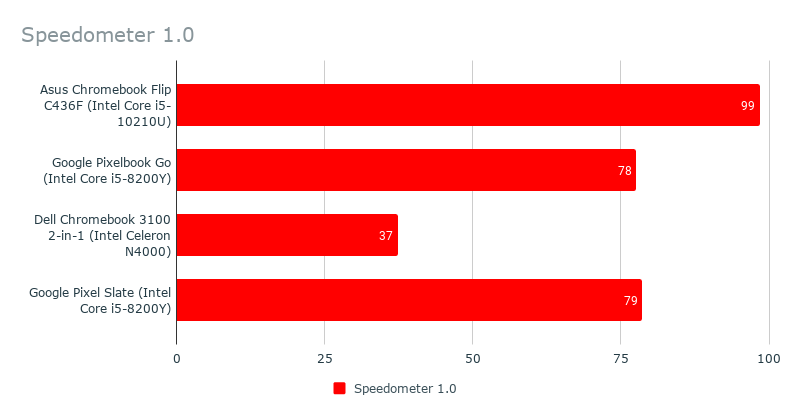 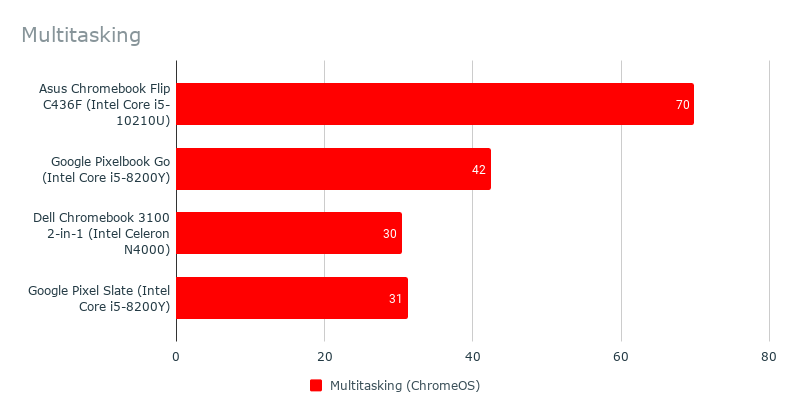 It’s certainly a very quick and responsive machine and there was no point at which I felt the laptop ran out of gas. I had tens of tabs open and it didn’t break a sweat.

It didn’t fare quite so well when it came to battery life, lagging behind the superlative Pixelbook Go. However, in the overall scheme of things, it was still pretty decent. In our battery-life test with all networking disabled, the display set to 170cd/m² and a video playing continuously, it lasted 10hrs 24mins before shutting down. That’s plenty good enough for a full day’s work. 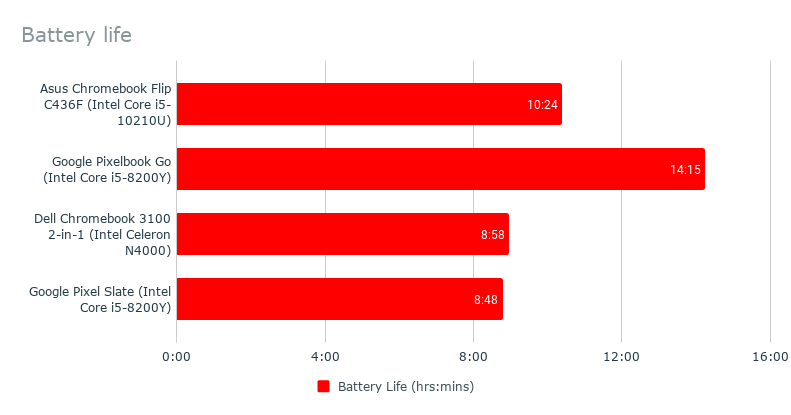 Anything else I should know?

Don’t forget that Chromebooks like this aren’t restricted to just running browser-based software anymore. The Asus Chromebook Flip C436F will run Android apps, installable via the Google Play store, and it can run Linux and Linux-based software.

If you want to do the latter, you have to choose to install Linux from the Settings menu. Once done, it’s possible to install all sorts of stuff directly from the command line or by downloading DEB files and double-clicking. There’s a whole world of applications to choose from, from photo-editing software such as GIMP and full office software such as LibreOffice to development IDEs such as Eric and Wing. Think of it like an overpowered Raspberry Pi with a display and you’re pretty much there.

Should I buy the Asus Chromebook Flip C436F?

It’s hard to pick holes in what the Asus Chromebook Flip C436F has to offer. It’s a cracking little laptop: powerful and nicely made, with a great display, effective touchpad and decent keyboard. Battery life is very good, too.

My choice would be for the Pixelbook but, if I’m honest, there isn’t much in it. The Pixelbook Go has a nicer keyboard and longer battery life, but the Asus has more storage, a superior display and a fingerprint reader. Whichever you choose, I’d wager you’ll be pleased.

Don't miss a deal at H&R Block
Best offers at House of Fraser
Discounts, Sales and Deals at Surfdome
Save your money with EBay DE
Online-Shopping with Mobiles
Best products at Go Daddy
Latest Posts