In the best of times, indoor air quality is typically worse than the air outside. But with wildfire smoke impacting many states and the lingering coronavirus keeping us indoors, the air in our homes might be particularly bad right now. A smart air purifier is an easy way to monitor and improve it and is downright essential when atmospheric particulates make opening windows unhealthy. Amrobt’s MAX HEPA11 Air Purifier is a great option, with multiple operating modes, easy-to-understand air quality readings, and remote app control.

It measures 10.6 x 11.8 x 19.2 inches (WxDxH) and weighs about 10 pounds. A carrying handle makes it relatively light work to move from one room to another if I wanted to, say, keep it in my bedroom at night and in the living room during the day.

The purifier uses a three-layer filtration system that, according to Amrobt, eliminates 99.97 percent of airborne pollutants: a fine preliminary filter captures large particles such as hair, pet dander, and lint; an activated charcoal filter neutralizes household odors, and a there’s a HEPA 11 filter for fine particles such as dust, pollen, and mold. The 11 indicates the HEPA filter’s Minimum Efficiency Reporting Value, or MERV, which rates a filter’s effectiveness on a scale of 1 to 20. A filter in the MERV 11 to 16 tier means it captures more than 90 percent of large particles and 70 to 90 percent of small particles. Each filter should last 3 to 4 months, according to Amrobt, and you can monitor the filter life in the Smart Life app. 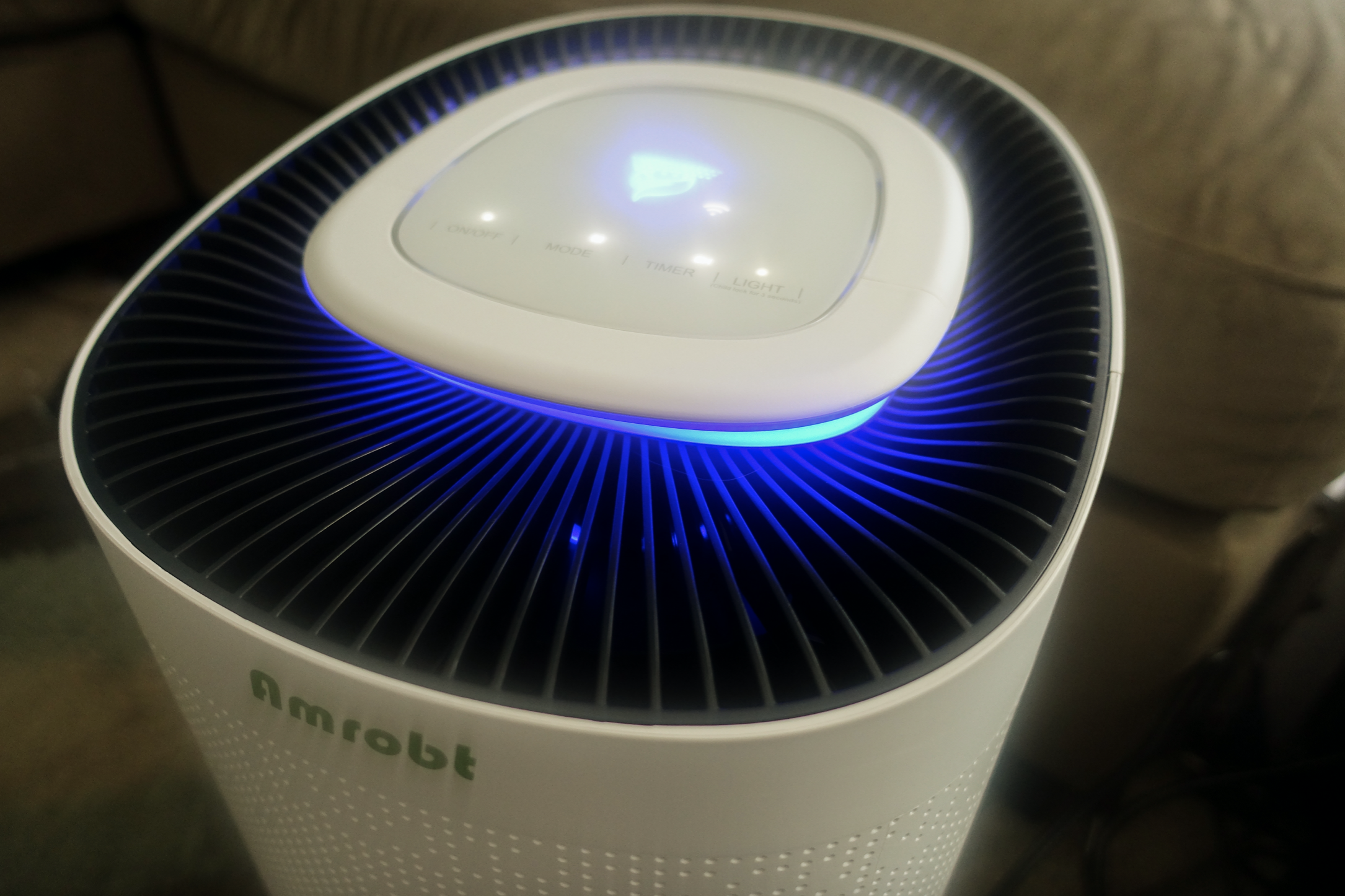 A touch panel on top of the unit includes a power button, mode selector, timer, and child lock. This last button doubles as an on/off switch for the light ring under the panel, which changes color to indicate current air quality. You can also control the purifier—and get detailed air quality data—by pairing it with the third-party Smart Life app during setup.

Before you start using the purifier, you must remove a panel at the back, take out the filter and remove it from its plastic bag, then reinsert it and replace the panel. The final prep step is to plug the purifier in and turn it on.

To pair it with the app, you need to create a Smart Life account, then add the purifier from a list of “small appliances.” The app scans for your Wi-Fi network and prompts you to log in. There were no issues in my setup process, and it was completed in a couple of minutes. 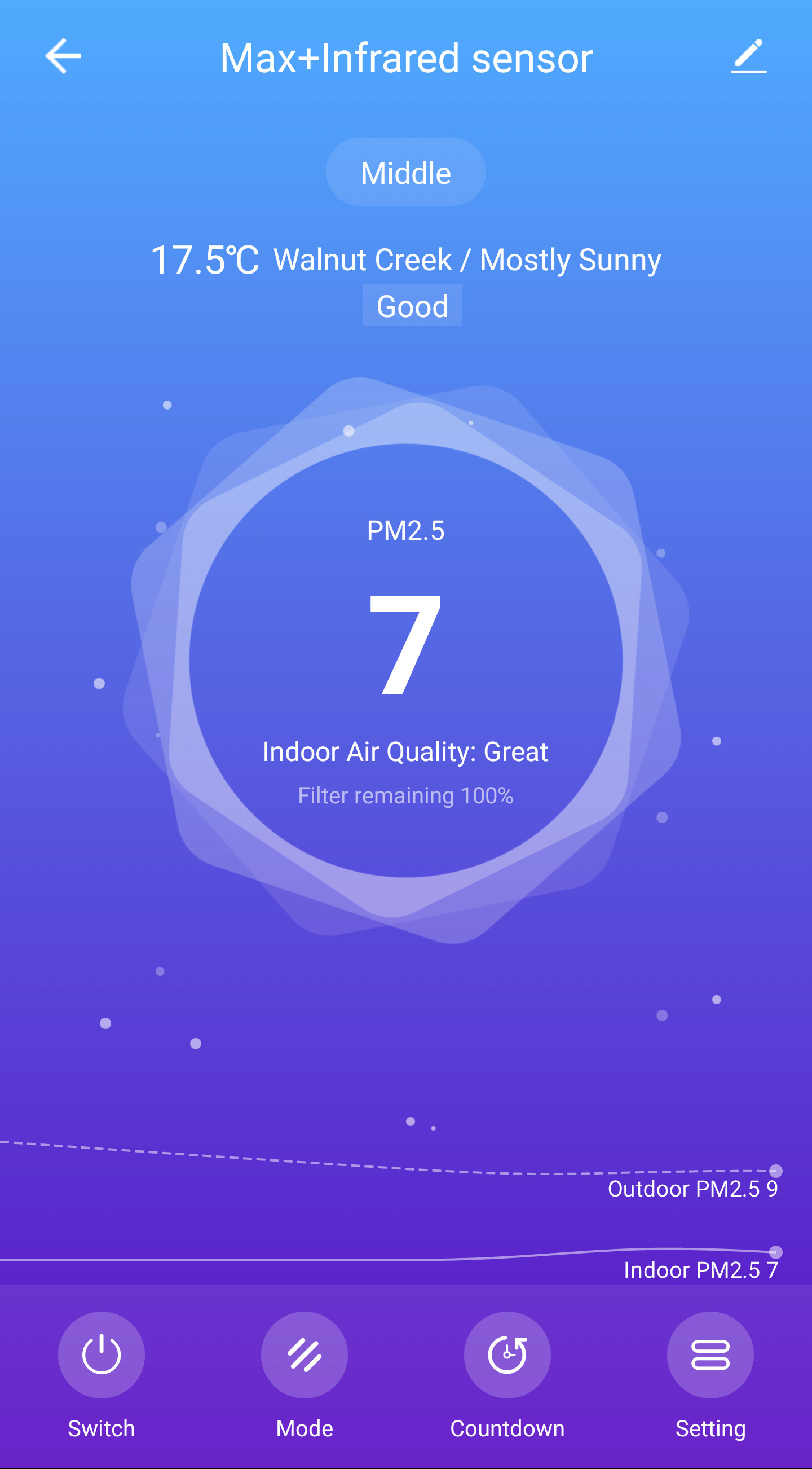 There’s also a pair of line graphs at the bottom that chart your outdoor and indoor PM2.5 levels for context. All this is displayed against a colored background that indicates your air quality: blue is great, yellow is fair, red is poor. The colors mirror those on the unit’s light ring.

The purifier has four modes, or “wind” speeds: Auto, High, Middle, and Sleep. Auto is arguably the most useful, as it automatically switches the between the other three speeds according to the air quality. If you’d rather the purifier not run continuously, you can set the timer function—called “countdown” in the app—to shut it off after 2, 4, or 8 hours. The app provides a schedule feature, as well, where you can set automated on and off times,

Amrobt claims the purifier is “ultra silent,” and that is true if you run it only in sleep mode. In that setting, the fan operates at a whisper-quiet 25dB. It maxes out at 55dB in High mode, which is closer to the volume of a running refrigerator.

The purifier has a Clean Air Delivery Rate (CADR) rate of 235 CFM (400m³/h). This reflects its effectiveness in removing indoor air pollutants based on room size and the volume of clean air produced per minute. Generally, the higher the CADR number, the more effective the purifier is.

The Smart Life app offers a few smart integration optionsm including Amazon Alexa, Google Assistant, and DuerOS smart devices (DuerOS is a lesser-known platform developed by Baidu). You can also set up scenes and automations with third-party devices, though Amrobt doesn’t say which products are compatible.

At $190, the MAX HEPA11 Air Purifier is a decent value. Its readings are simple to understand at a glance, and once you set it up, it requires little interaction other than to turn it on and off. It’s also quiet, which increases the likelihood you’ll keep it running, and that’s critical to keeping your air consistently healthy. Those are all good reasons to give it serious consideration.

The Amrobt MAX HEPA11 Air Purifier is an affordable, practical appliance that will ensure the air in your home is healthy to breathe.

Don't miss a deal at Intuit Small Business
Best offers at House of Fraser
Discounts, Sales and Deals at EBay DE
Save your money with Sephora
Online-Shopping with Marks and Spencer
Best products at Turbo Tax
Latest Posts