Of all the products Amazon announced at its autumn event, it was the Echo Studio that stood out. There’s no doubting the usefulness of the company’s existing smart speakers, but the thought of one that delivers sound able to rival Apple’s HomePod was a truly tantalising prospect – especially at a cost of £100 less.

Although it doesn’t quite match the HomePod for outright sound quality, the Echo Studio delivers a bigger and more immersive sound than any Echo speaker to date, while offering many features that Apple’s similarly shaped smart speaker is crying out for.

Amazon Echo Studio review: What you need to know

As with any Echo speaker, the Studio is powered by Amazon’s Alexa smart assistant and is controlled primarily by issuing voice commands. As well as using it to stream music from Spotify, Amazon Music and Apple Music, you can ask it to play audiobooks and radio, set timers and reminders and “drop in” with friends and family, to name just a few standout features. 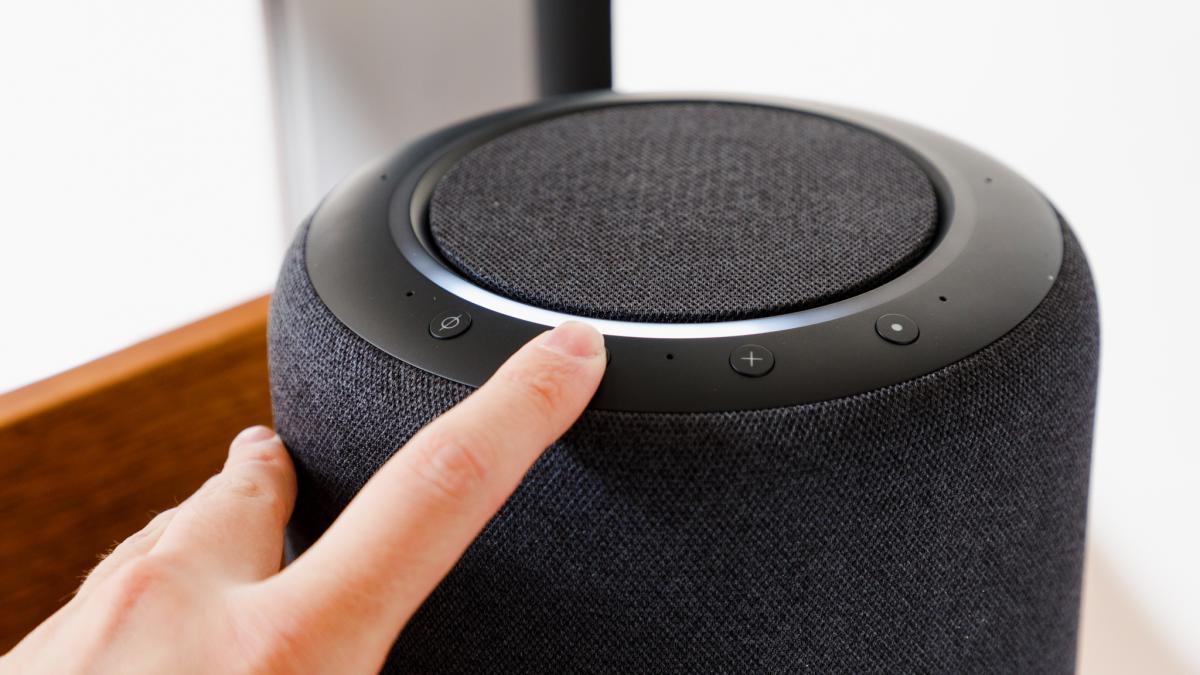 Unlike Echo speakers before it, however, the Studio also caters to customers who might want to use it to upgrade their TV audio. It connects wirelessly to both the Fire TV Stick 4K and Fire TV Cube and, if you don’t have one of those devices, its 3.5mm jack doubles up as a mini-optical connection so you can connect it to practically any TV. Failing that, you can use it with practically anything else via Bluetooth.

As well as being compatible with a wide range of music formats, including CD Quality (16-bit/44.1kHz) and Hi-Res (24-bit/up to 192 kHz) audio, the Echo Studio is compatible with Dolby Atmos and Sony 360 Reality Audio, meaning it offers a kind of pseudo-surround sound. Should you want even more volume or bass, it can also be paired with a second Echo Studio and the Echo Sub.

At £190, the Echo Studio is just £50 more than the smaller Echo Plus (£140), which also lacks an optical connection. At this price, the Studio’s closest competition arguably comes from the Apple HomePod (£280). It’s the best-sounding smart speaker we’ve heard but sadly there’s no option to use it as a TV speaker besides pairing it with an Apple TV.

It’s a similar story with the Sonos One (£199). Despite the perk of offering the choice between two voice assistants – both Google Assistant and Alexa – again there’s no optical input. If you’re after a great-sounding TV speaker that also has a voice assistant, the Polk Command Bar is one of few soundbars with Alexa built-in. At £250, it’s a little more expensive than the Echo Studio but it represents superb value for money. 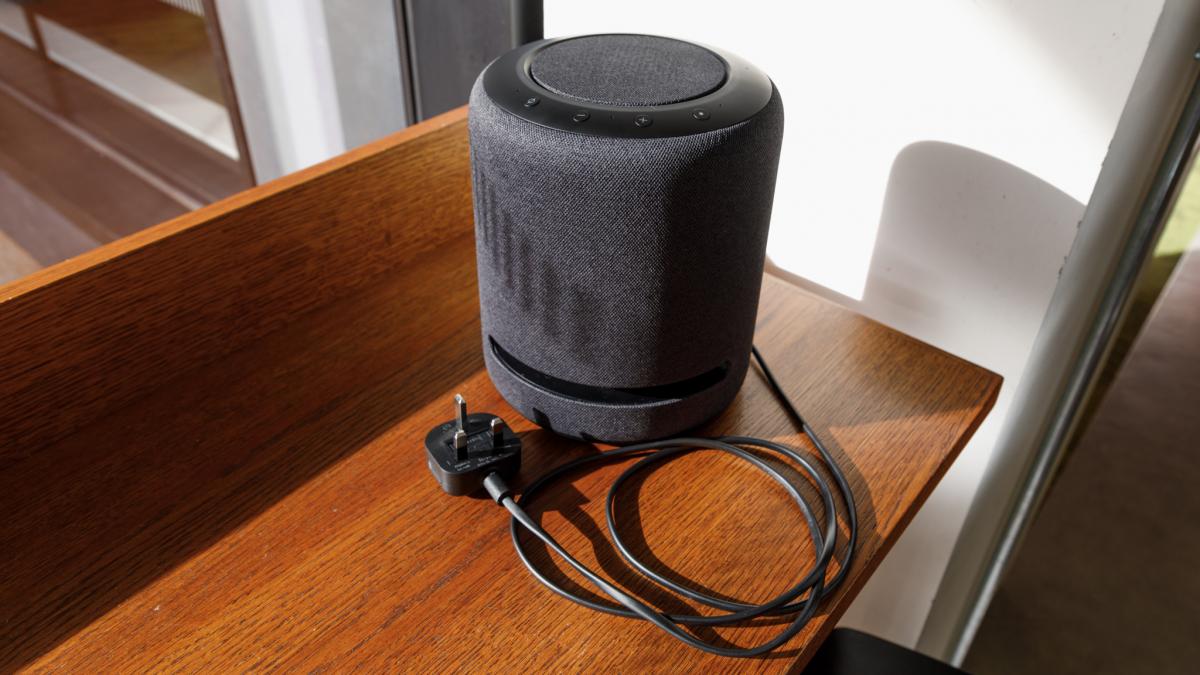 The Echo Studio bears more than a slight resemblance to Apple’s HomePod. Both are dustbin-shaped, cylindrical devices that conceal a number of different speaker drivers behind dark mesh fabric covers. However, the key differences are that the Echo Studio has what Amazon calls a “bass aperture” – a narrow cutout near the bottom of the unit that helps to “maximise bass reproduction” – and that it’s considerably larger than the HomePod.

Indeed, at 206mm x 175mm, the Echo speaker is around 20% taller and 25% wider in diameter than the Apple speaker, which measures 170mmm x 140mm. Despite its larger size, though, the Studio contains three fewer drivers – it has three (left-, right- and upward-firing) 2in midrange speakers, one forward-facing 1in tweeter and a single, downward-firing 5.25in (133 mm) woofer. To power these, the Studio has three separate amp blocks – one for the mid-range speakers, one for the tweeter and one for the woofer.

As with other Echo speakers, along with being voice controlled, the Studio has an array of buttons on top. These let you change volume, mute the microphone and give commands without needing to say the “Alexa” wake word. Surrounding these, you’ll also find an multi-colour LED ring that indicate s when the speaker is responding to requests and when you have messages or notifications, among other things. And, finally, on its reverse, flanking the power port there’s a 3.5mm jack that doubles up as a mini-optical input. 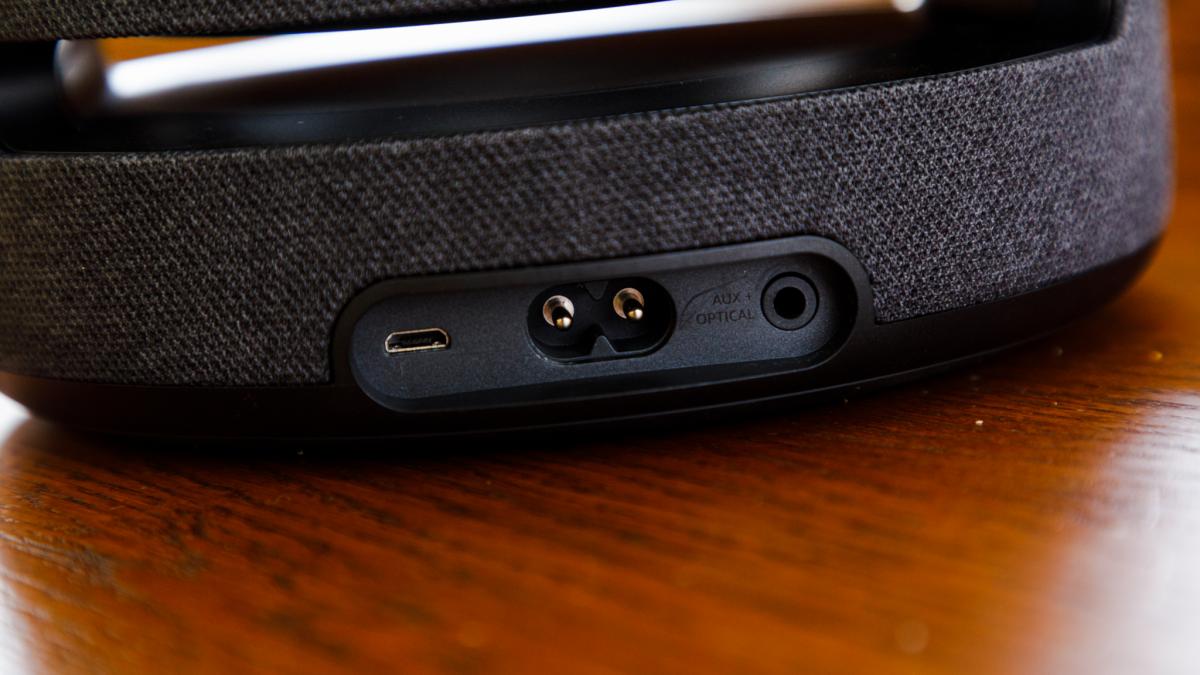 Although it can be used as a TV speaker, however, it’s worth pointing out that the Echo Studio doesn’t come with a remote control, and this poses problems when it comes to the simple task of adjusting the volume. Simply put, the only way of adjusting the volume of the speaker when it’s connected via the optical input is to ask Alexa to do it or walk up to it and use the physical controls on the speaker. You can’t use the volume control in the Alexa app to do that, although weirdly it does work for streaming music.

That’s far from ideal when you’re midway through a movie because Alexa momentarily mutes the audio to listen to commands – and it’s a slow, rather laborious way of adjusting the volume anyway.

Elsewhere, the Echo Studio works just like any other Echo speaker. Setup is quick and easy via the Alexa app and it’s here that you can then manage connected Bluetooth devices, customise alarm sounds and setup speaker groups for multi-room audio, including pairing the Echo Studio with an additional Echo Studio or an Echo Sub. 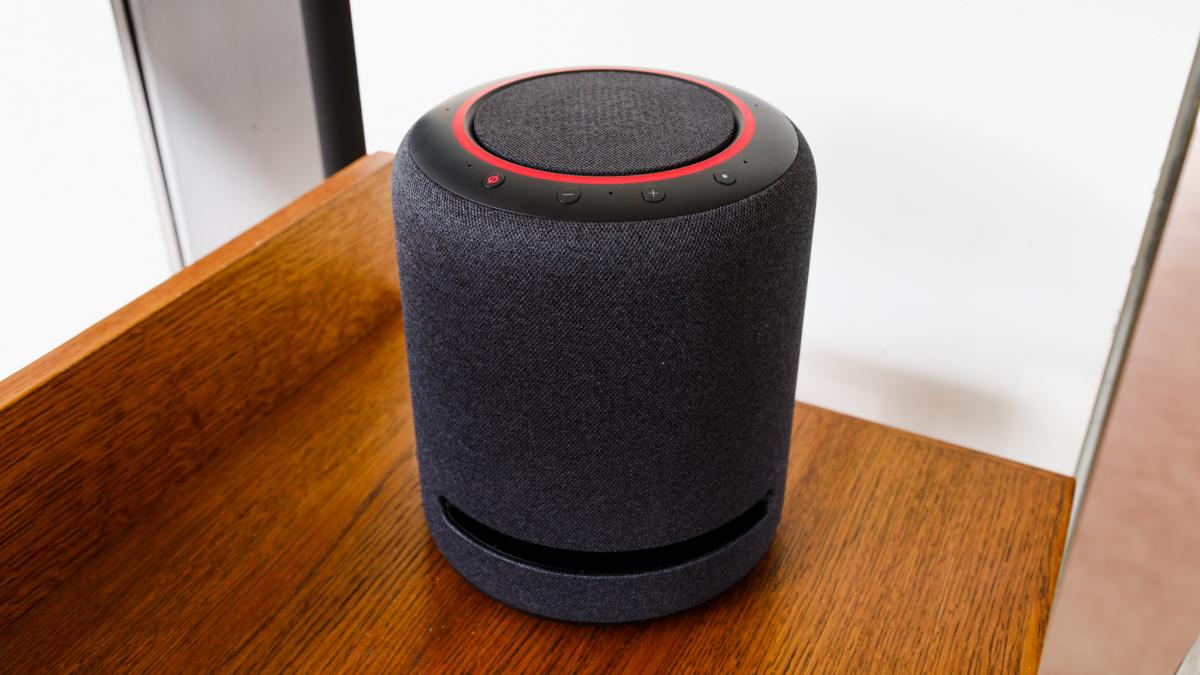 However, although it’s possible to pair the Studio with additional speakers, Amazon is keen to point out that you shouldn’t have to. Central to the Studio’s ability to offer what the company calls a “multi-dimensional” sound is that unique speaker arrangement. Indeed, it’s this five-driver design that makes the Echo Studio the first smart speaker to support Amazon’s new “3D Audio” format.

These tracks, which are available to stream with an Amazon Music HD subscription, have been “mastered in 3D” to offer a more spacious and immersive sound. Having listened to a number of them via Amazon’s “Best of 3D Music” playlist, which includes Ariana Grande’s 7 Rings and Free’s All Right Now, I can confirm there’s more of a sense of width than you’d normally expect to hear from a single speaker unit but it’s no substitute for a true stereo system in that you can still fairly easily pick out the Studio’s position in the room.

What’s more, irrespective of the format you’re playing the Echo Studio still falls short in terms of outright sound quality. In particular, music can sound rather boomy and recessed in the mids compared to Apple’s HomePod. Indeed, when compared with my £160 Dali Zensor 1 bookshelf speakers, it sounded a little muffled and lacks crispness, even if you boost the mids and treble using the Amazon Alexa mobile app. 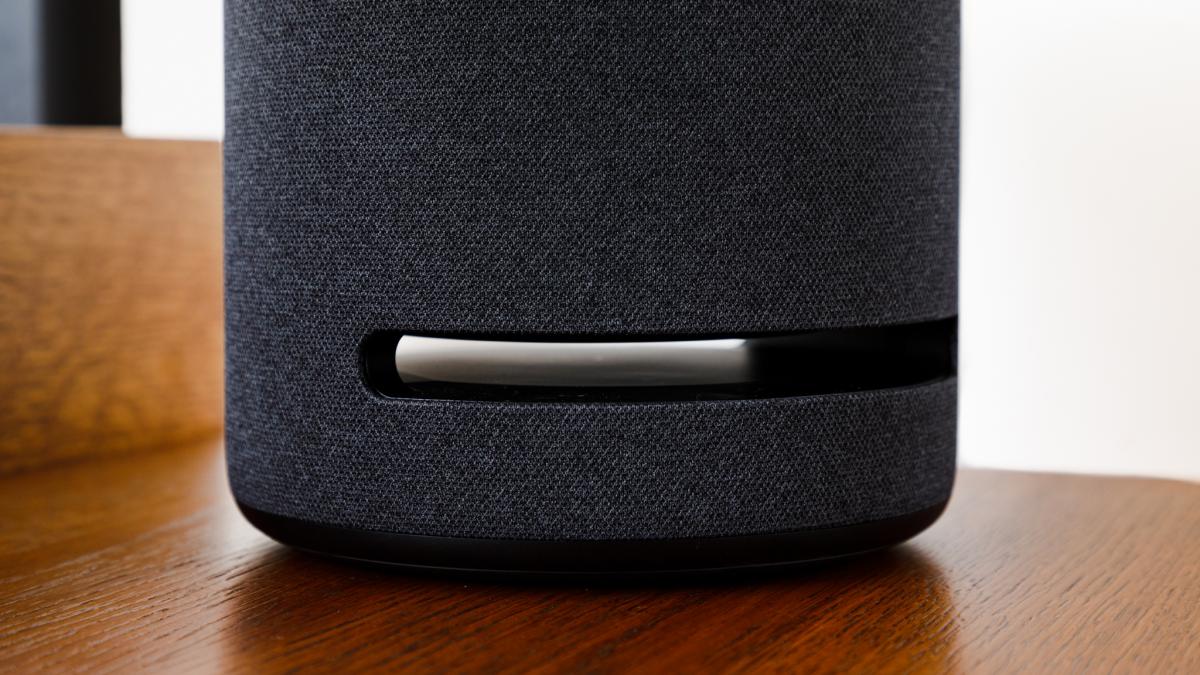 Where the Echo Studio does emphatically deliver, however, is in the sheer scale of the sound that it generates. I’m used to the sound quality quickly degrading as you crank the volume up on most smart speakers but, if anything, Amazon’s new speaker sounds most impressive when played in anger.

Not only do the mid-range frequencies benefit from turning up the volume but when the sub comes to life, it makes for a sound that has considerably more depth than other speakers the same size. If you want a single smart speaker that can easily fill a larger living room, the Echo Studio is in a league of its own and if you’re a lover of bass it is, without doubt, the best fix you’ll find at this price.

So how well does it work as a TV speaker? As you might expect, the Studio suffers from similar shortcomings when connected to an optical input as it does when you’re streaming songs from Amazon Music wirelessly. As such, I found myself cranking the mid-range frequencies as far as the Alexa app would let me in order to make narration as clear as I felt it ought to be when watching a BBC wildlife documentary.

Again, the scale of the sound is the main benefit here, and there’s considerably more depth and energy to the sound than you’ll find from your TV’s own inbuilt speakers. The only caveat to that is that where a soundbar is emits sound from directly below your TV, if you opt to use a single Echo Studio you’ll have to get used to the sound coming from the left or right of the screen. That’s something you can fix, albeit at considerable extra expense, by adding a second Echo Studio.

It’s also worth pointing out that although the Echo Studio pairs with the Amazon Fire TV Stick 4K and Fire TV Cube that’s only possible via Bluetooth and, when connected in this way, the Echo Studio only receives a stereo signal. Connecting the Echo Studio to your TV via an optical cable is the only way to ensure you’ll receive 5.1 surround sound.

As with 3D Music, it’s a good idea to moderate your expectations when it comes to the Echo Studio’s performance in this regard, however. Though can generate more of a sense of space than you’d expect of a single speaker unit, it certainly couldn’t compete with the Vizio 5.1.2 Home Theatre Sound System we were testing at the same time, either in terms of detail or immersiveness. It’s a decent upgrade on your TV’s speakers, for sure, but don’t expect miracles.

It’s important to remember that this isn’t a £500 soundbar here but rather a £190 smart speaker. And at this price, there’s absolutely nothing that can compete with the Echo Studio in terms of sound quality, features and connectivity.

As well as offering all the Alexa-smarts you normally get from an Echo device, it delivers a powerful sound and can double up as a TV speaker, putting it in a category of its own. If you can forgo its smart features, there are soundbars that sound arguably better for similar money. Equally, if you simply want the best-sounding smart speaker, you’re better off with Apple’s HomePod. However, if you’re after something that does it all in one affordable package, it’d be silly not to consider the Echo Studio.

Don't miss a deal at Ancestry
Best offers at Sephora
Discounts, Sales and Deals at Microsoft Store
Save your money with Adobe
Online-Shopping with Argos
Best products at Farfetch
Latest Posts