The Amazon Echo Dot (3rd Generation) is a surprising product. It’s small, but it offers a gateway into the world of the smart home and improved audio over its previous models, as well as the Google Home Mini.

The Amazon Echo Dot (3rd generation) is one of the newest versions of Amazon’s popular small speaker, which is part of the popular Echo range of smart home devices. Amazon says the Dot is the best-selling speaker of all-time, which is a monumental achievement and a testament to how useful, and relatively inexpensive, it is.

Now, this Echo Dot we’re reviewing here is the 3rd version of the smart speaker. The 1st generation model was launched back in 2016 and there is, technically, a 4th generation model that’s been upgraded. But that’s known as the Amazon Echo Dot with Clock. Released in 2019, the only thing that really differentiates the Dot we’re reviewing here from it is, as you might expect, it has a built-in LED clock.

This will be handy for some, but not worth the extra price for others. Which means you shouldn’t be tempted with the newer model if you don’t really need the clock, as the third-gen Echo Dot sans time display that we’re reviewing here is still absolutely worth buying – especially if you already have a clock in your home.

There’s a lot to love about the Amazon Echo Dot (3rd generation). It allows you to control your smart home with a few commands, it’s able to make calls almost anywhere in your country, and it streams music from a range of the world’s most popular music services. It may be small, but we can all agree it sure packs a punch.

Despite a number of upgrades to the Dot over the years, this 3rd gen version still lacks a few essentials. Most notably, there’s no 3.5mm auxiliary cord. It’s not the simplest Amazon Echo speaker though; the Amazon Echo Input, adds Alexa smart capability to a connected speaker, without having the ability to play music itself.

What is an Echo Dot used for? Think of the Amazon Echo Dot as your own personal assistant. We’re not at the stage where our tech can physically help us run our homes, but it can do everything else. So you can ask the Dot’s voice assistant, Alexa, to answer questions about the time, general knowledge, traffic, what the weather is going to be like and everything else that might help your day run a bit smoother.

Thanks to smart home tech all connecting up, you can also use your Dot to control other devices that you might have in your home. So let’s say you have a Philips Hue lightbulb, for example, the Dot can control that too. You’d just need to say “Alexa, turn off the bulb” – and there’s a whole host of other skills you can employ, from playing games to controlling other tech to waking you up in the morning. You can even now use Alexa to make calls to phone numbers in the US, Canada, Mexico, and the UK.

Is there a monthly fee for an Echo Dot? No, there’s no monthly fee. You just need to buy the Dot and have an Amazon account. However, if you’re an Amazon Prime member you’ll get some added benefits, like access to Amazon Music through your Dot.

Is the Echo Dot worth the money? In our opinion, yes. It packs a lot of great features and capable tech into a tiny package. It also makes financial sense for those who aren’t sure whether to kit their homes out with smart tech and don’t want to take much of a gamble.

Does the Echo Dot require Alexa? Yes. Alexa is what makes your Dot smart. Think of her as your own smart assistant and the brains behind the hardware. You ask her to do things and help you with things throughout the day, from “Alexa, what will the weather be like later?” to “Alexa, switch on the lights please.”

You don’t need to do anything extra to get Alexa, as the voice assistant comes built-in to Amazon’s Echo range of smart speakers. (Here’s how to change Alexa’s voice, too.)

Does the Echo Dot need Wi-fi? Yes, it does. There’s a chance you’d be able to use the Dot as just a Bluetooth speaker without Wi-fi, but to get it all set-up you’d still need to get it connected to the internet. If you don’t have Wifi right now, wait until you do before purchasing a Dot. 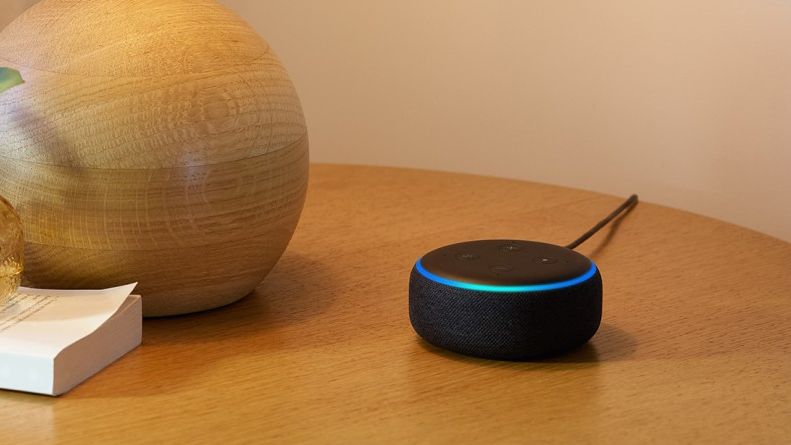 Its usual price is the same as previous models were sold for just before it was launched, making it hard to criticize given its improvements to sound quality that we’ll discuss shortly.

In the very near future this will likely be the only Amazon Echo Dot available on the market – you’ll still see 2nd Gen devices floating on store shelves for a bit longer, but soon Amazon Echo Dot product pages will all default to Gen. 3.

The 3rd Generation Amazon Echo Dot is easier on the eyes than either of Amazon’s two previous Echo Dots. It offers rounded edges that help make the Dot look less like a hockey puck, and the fabric grille around the outer edge feels modern and classy simultaneously. (Amazon has been taking pointers from the Google Home Mini, apparently.)

The fabric mesh design helps the Amazon Echo Dot blend in with the rest of the refreshed Amazon Echo line-up, which received a fabric-covered makeover with last-year’s refresh. As a result, the new Echo Dot comes in colors to match the rest of the range, too, with Charcoal, Heather Grey and Sandstone shades.

On the top of the Echo Dot you’ll find four familiar buttons that consist of volume up and down, microphone mute and Alexa, as well as a four microphone array. 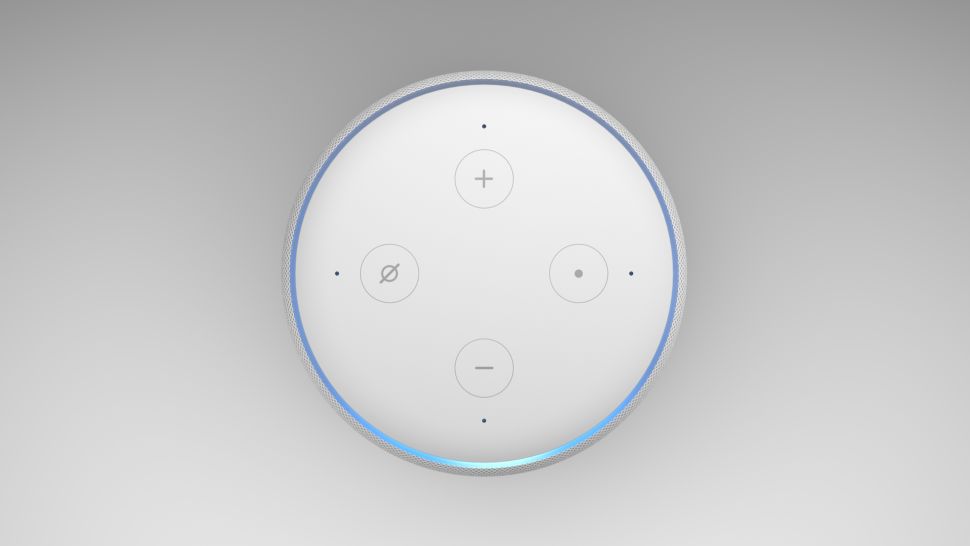 Activating Alexa either via the button along the top or by saying its name triggers the flashing blue ring of light that you’re used to seeing on other Alexa devices – though, on one of the units we were sent, there appeared to be a short (<1s) delay in between when we said the wake word and when Alexa started listening.

Spin the unit around to the back and you’ll find the power jack plus an auxiliary 3.5mm jack that can be used to connect the Amazon Echo Dot to any speaker with a matching jack. Unfortunately, however, Amazon doesn’t include one of these cables in the box and the accompanying charger, which used to be microUSB, is now a proprietary design.

These two small detractors aside, this is still one of the best-looking Amazon Echo Dots we’ve yet to see and, with a new color option, the most versatile, too.

Getting the speaker setup is simple – especially if you have one or more Alexa devices already setup in your house. If that’s you, all you need to do is head into the Amazon Alexa app and tap the plus icon in the Devices section – the app will do a quick scan for nearby devices and before you know it you’ll be up and running with your new smart speaker.

If you don’t have the Alexa or an Echo Device already installed, you’ll have to go through the process of downloading the app and signing into your Amazon account, but then it’s more or less the same process as above.

That said, while it was always easy to setup an Amazon Echo device in the past, we’re very pleased with the refresh to the Amazon Alexa app that rolled out in the last few weeks. The re-work makes it easier to group devices together into rooms, as well as add additional smart devices to your arsenal of appliances.

Unfortunately, Alexa itself hasn’t gotten the same kind of attention. That’s because Amazon has outsourced a lot of functionality to app designers who then create Skills for Alexa. These skills differ wildly in quality and utility with most of them largely falling into droll trivia games.

Looking past the spotty Skills library, Alexa was and still is a fairly competent smart assistant and if you just plan on using the speaker for tasks like getting your news and weather or controlling your smart devices, Alexa is more than up for the job. 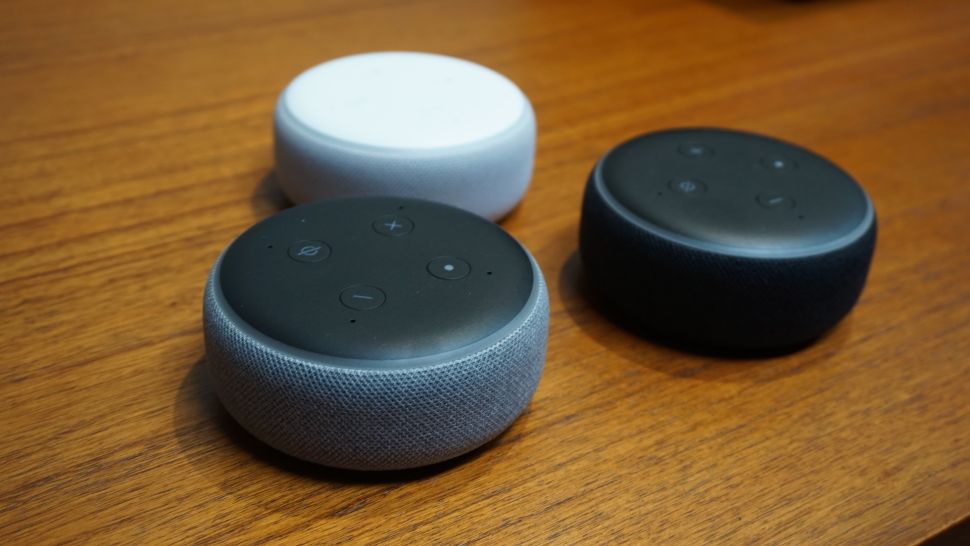 The marquee feature of the Amazon Echo Dot (3rd Generation) is the revamped audio system that helps make the Echo Dot sound better than any version prior.

While there’s very little debate that the latest Echo Dot does, in fact, sound better than the 2017 model, it’s not quite the device you’d want to listen to a whole album on – vocals are easily lost in a cacophony of sound, and bass is nearly non-existent (a given considering how small the Amazon Echo Dot is).

So, yes, while some music does better on the Echo than others (prog rock is not the Echo Dot’s friend and rap is just OK), you’ll still want to connect the Echo Dot to an external speaker when it’s time for some heavy listening.

Unfortunately connecting devices to the Amazon Echo Dot isn’t as simple as it could be: Disappointingly while Google has figured out a universal way to connect devices via Chromecast Built-in, Amazon needs to rely on Bluetooth for its connections. That’s not a dealbreaker by any means, but it can be a bit of an annoyance if you have friends over who all want to take turns playing DJ.

It’s also interesting that Amazon is pushing the audio performance aspect of the speaker as we found during our testing that it was the microphones and call quality that left us most impressed.

Calling, therefore, remains one of the best features of the Amazon Echo Dot – alongside smart device control, of course.

If you’re looking for a device to give to family members who might not call as frequently as they should, the Amazon Echo Dot’s ability to ‘Drop In’ and make on-demand calls to anyone, anywhere in the country remains a great solution. Outside music, the Echo Dot has exactly the same amount of smarts as the full-size Echo. You can use it to set timers while you’re cooking, have it give you a one-minute news roundup while you’re eating your cereal in the morning, or even order an Uber if you’ve entered your Uber login details into the Alexa app.

If you have a set routine you’d like it to perform, Alexa can string multiple commands together – like, for example, you could have your lights, heating and TV switched on – in one short phrase. This is handy once you stock up on multiple smart devices.

We’ve also recently seen a slew of new voices for Alexa, as well as a new Brief Mode that makes Alexa less likely to respond to your voice (to stop the voice assistant constantly interjecting in conversations) and voice shopping via the Amazon Store.

All these features are great and make the Amazon Echo family of devices the leader in the field, even despite some tough competition from Google Assistant.

If you’re in the market for a cheap wireless speaker that can make calls, control your smart home and play the occasional song or two, the Amazon Echo Dot is easily one of the best smart speakers on the market for you – even better than the Google Home Mini in terms of call quality and music playback.

That said, if you plan on sitting down for a longer listening session, we recommend connecting to an external speaker (remember to pick up a 3.5mm auxiliary cord!) or opting for one of the more audio-adept Amazon speakers like the Amazon Echo (2nd Generation) or new Amazon Echo Plus with an Amazon Echo Sub. Your music will thank you.

Don't miss a deal at Sky
Best offers at Farfetch
Discounts, Sales and Deals at Adobe
Save your money with Ticketmaster UK
Online-Shopping with Argos
Best products at Newegg
Latest Posts