Has a true AirPods challenger finally arrived? Find out in our first look (and listen) of the Echo Buds

It’s taken a while, but Amazon has finally entered the wearable audio arena. The all-new Echo Buds are the very first headphones in Amazon’s now extensive Echo device family, and they allow you to take Alexa with you wherever you go. Although the Echo Buds aren’t the first headphones in the world to carry in-built Alexa, they are the first pair made by Amazon itself.

Somewhat surprisingly, they also support the competing smart assistants Siri and Google Assistant. And then there’s that other major selling-point: Bose Active Noise Reduction. Below you’ll find all the specification, pricing and release date information you need to know, as well as my early verdict on the Echo Buds following a night out on the town with Alexa in my ear.

Amazon’s Echo Buds are compact, shiny black pearls of plastic with discreet ear tips jutting out from the front end. They look much like any other generic pair of wireless in-ear headphones, as worn by a million commuters every day. In fact, there’s not even any Amazon branding on the Buds themselves. The distinctive ‘swoosh’ is only found on the compact charging case, which is topped up via micro-USB. 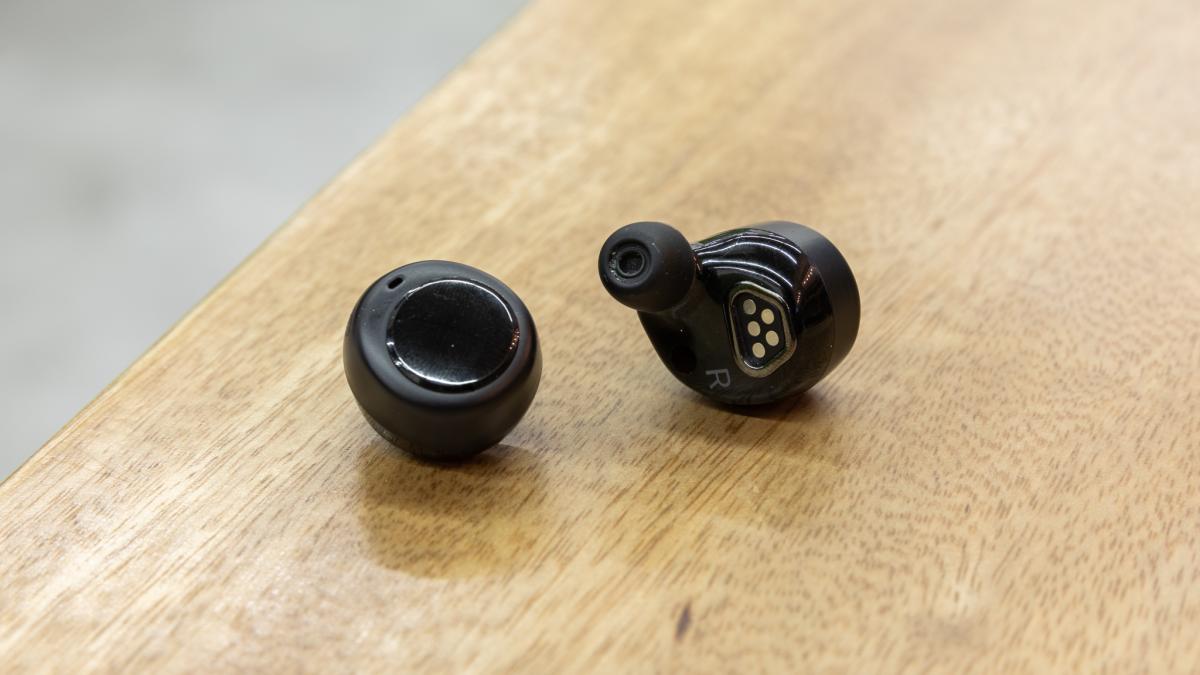 I wouldn’t call the Echo Buds uncomfortable, but I definitely found them harder to fit than similar in-ear headphones from Anker, Apple and Google. Each pair of Echo Buds comes with three sets of ear tips and ‘wingtips’, in small, medium and large. Upon popping in the Echo Buds for the first time, they immediately popped back out, and one went rolling off along the floor. The only way I could get them to stay put was by using the largest ear tips and well as the largest size of the optional wingtips. 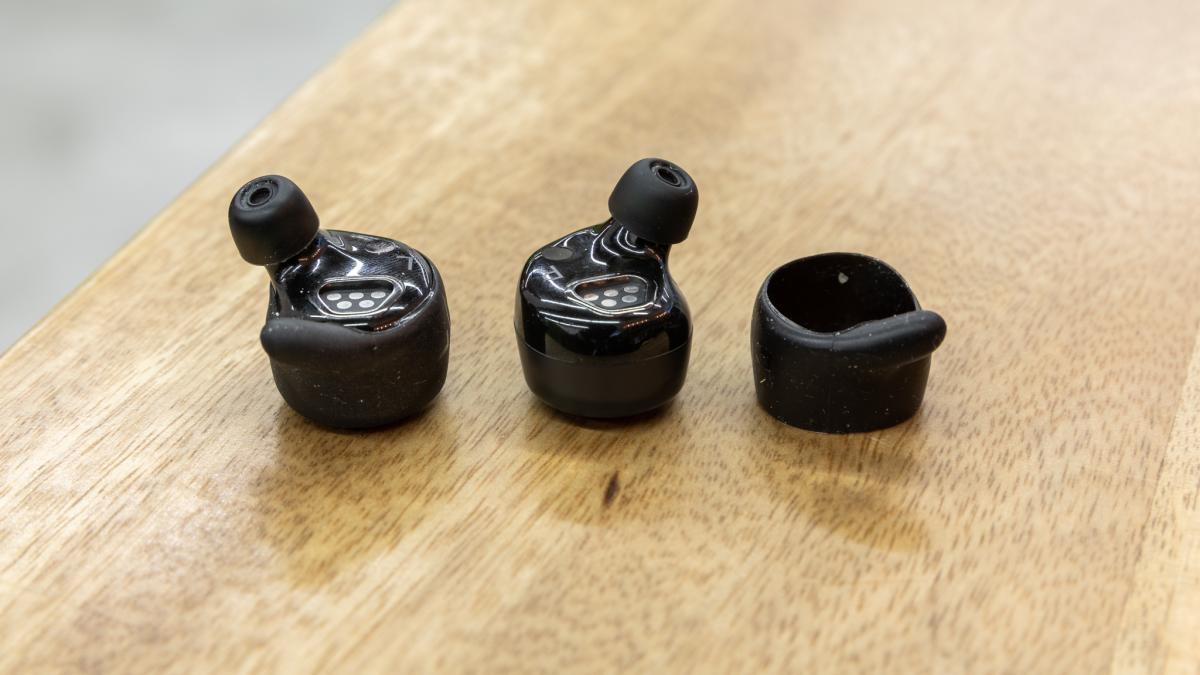 To test the audio quality and noise-cancelling capabilities of the Echo Buds, myself and a group of fellow Alexa acolytes were led on a walking tour of London’s incredibly busy Soho. Maybe not the safest place to be wandering around with noise-reducing earbuds playing pumping music, but it was a good way to find out how well the noise cancelling works. And it does work very well, in fact.

It’s easily turned on or off with a double-tap on the outer touch sensor of either Bud. Switching back to non-ANC mode, which Amazon calls ‘Pass-through’, it’s clear how much of the surrounding noise the Bose ANC actually blocks out. I’m not a fan of the filtered non-ANC, however, and find that, as with other noise-cancelling headphones, it adds a significant amount of background babble that isn’t actually there, making a bar with around 50 people sound like a cavernous hall with five hundred. You can at least adjust how much ambient sound it lets through by using the Alexa app. 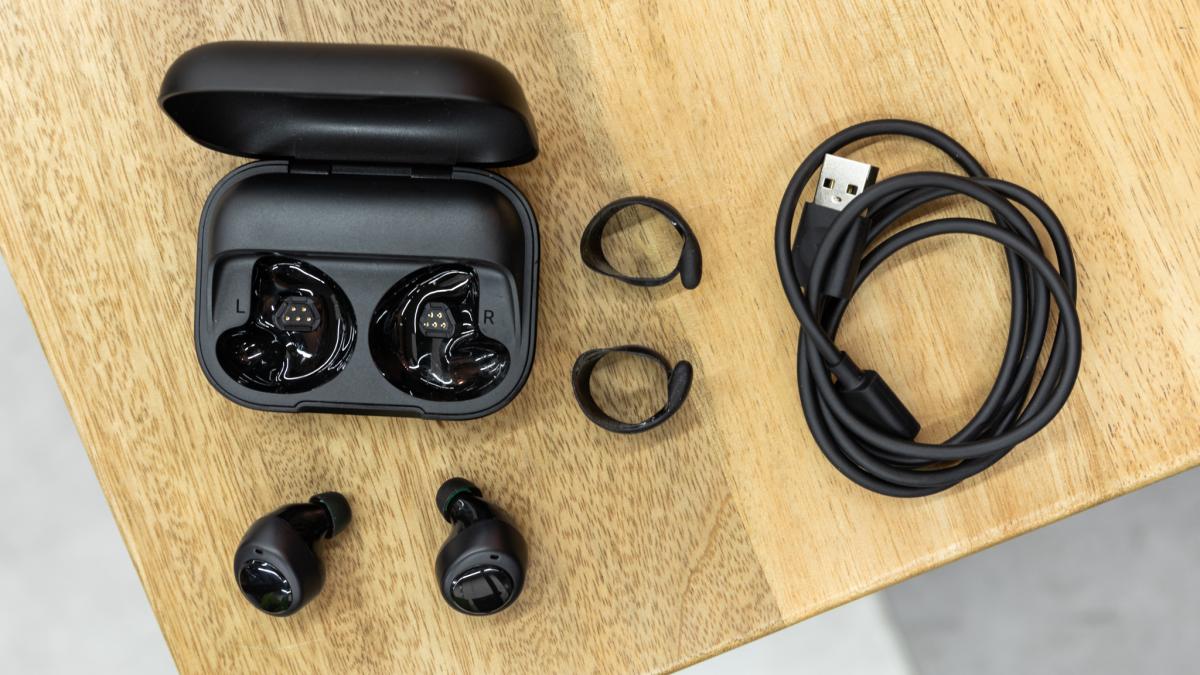 Conducting a test phone call in the middle of a heaving street, I found the Bose ANC to be extremely effective and in fact essential for hearing the other person’s voice. There are three microphones on each Bud, and they seem to do a great job of picking up the voice; I was able to invoke Alexa with the quietest mumbling of commands. Since the Echo buds are integrated into the Alexa infrastructure, you can issue all the smart home commands that you’d normally give to your Echo (or other) smart devices at home. 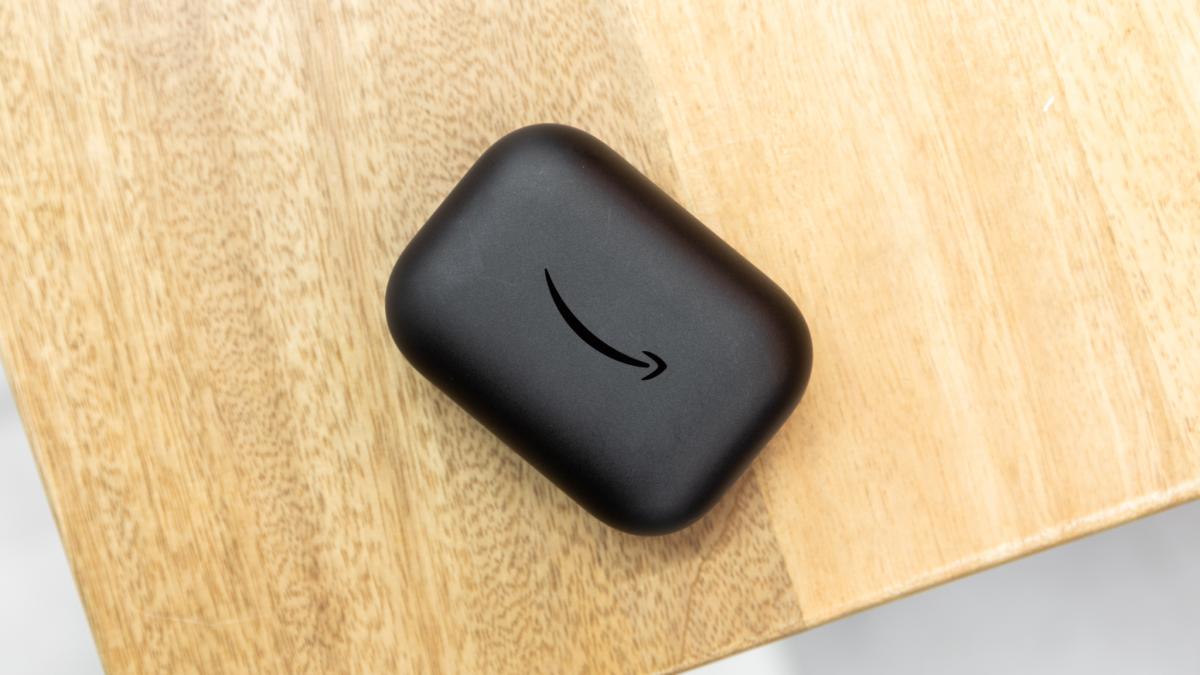 The audio quality for music isn’t stunning on the Echo Buds, but it’s well balanced and does a good job filling up the whole ear. For £120 earbuds, the sound is impressive; the Apple AirPods Pro are better, but they’re over twice the price. Volume on the Echo Buds goes much higher than you’d ever need it, and is easily controlled by asking Alexa – when there’s an available internet connection, that is. As soon as I descended into the Tube, I was forced to control the volume from my phone.

Since I have an Android handset I was unable to test out Siri functionality, but the iPhone users around me seemed to be getting on alright. Unfortunately, using Google Assistant with my Buds didn’t pan out. Using touch-control shortcuts it’s meant to be very easy to activate Google Assistant (“simply press and hold your earbud”) and give it commands through the Echo Buds’ microphones. Despite a dozen restarts of the Alexa app and several reboots of my Google Pixel 3a phone, this did not work for me, despite the app showing that the Google Assistant shortcut command was correctly assigned. 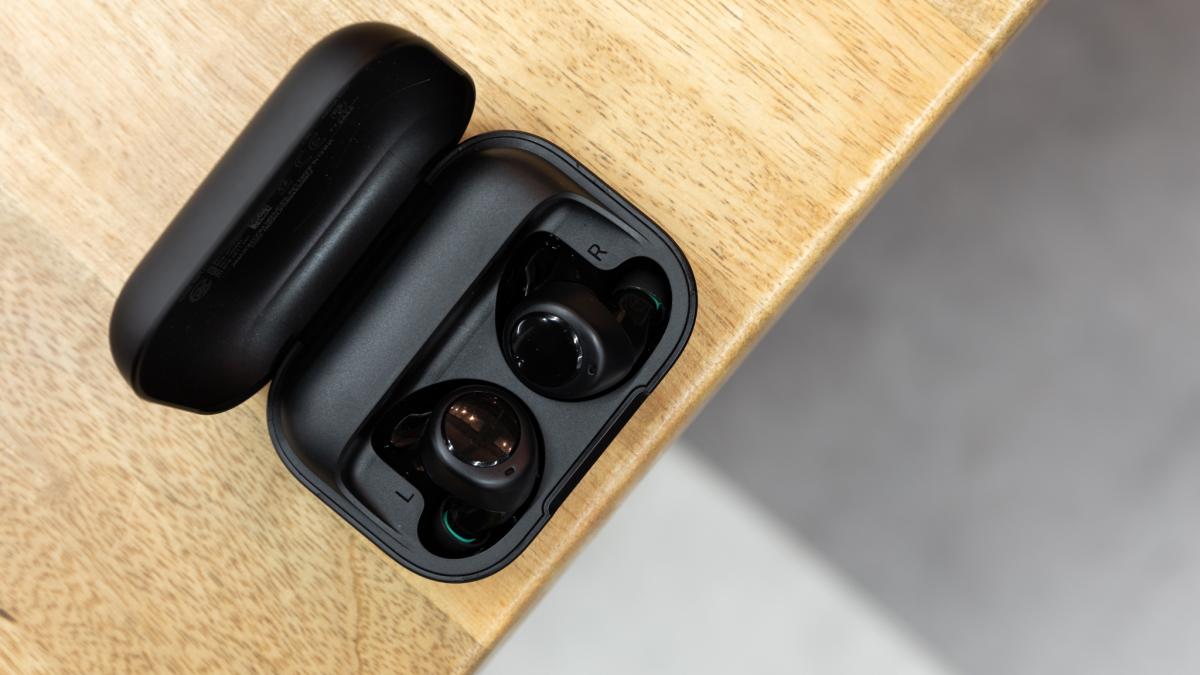 On the box, Amazon claims that the Echo Buds will deliver “up to five hours of music playback per charge” and roughly 20 if topped up using the charging case throughout the day. Over the course of about three hours, the Echo Buds battery indicator dropped from 99% to about 45%, but I was only playing music for less than half that time. I’ve not had time yet to conduct a thorough battery test yet, but obviously the charge life will be affected by volume level and use of the Bose ANC feature.

Amazon has priced its Echo Buds at a fiercely competitive £120, which is less than half the cost of the Apple AirPods Pro. Even the standard AirPods cost around £150, which is a big enough gap to make people opt for Amazon over Apple. And because the Echo Buds also work with Siri and Google Assistant, they’re covering every possible consumer base. 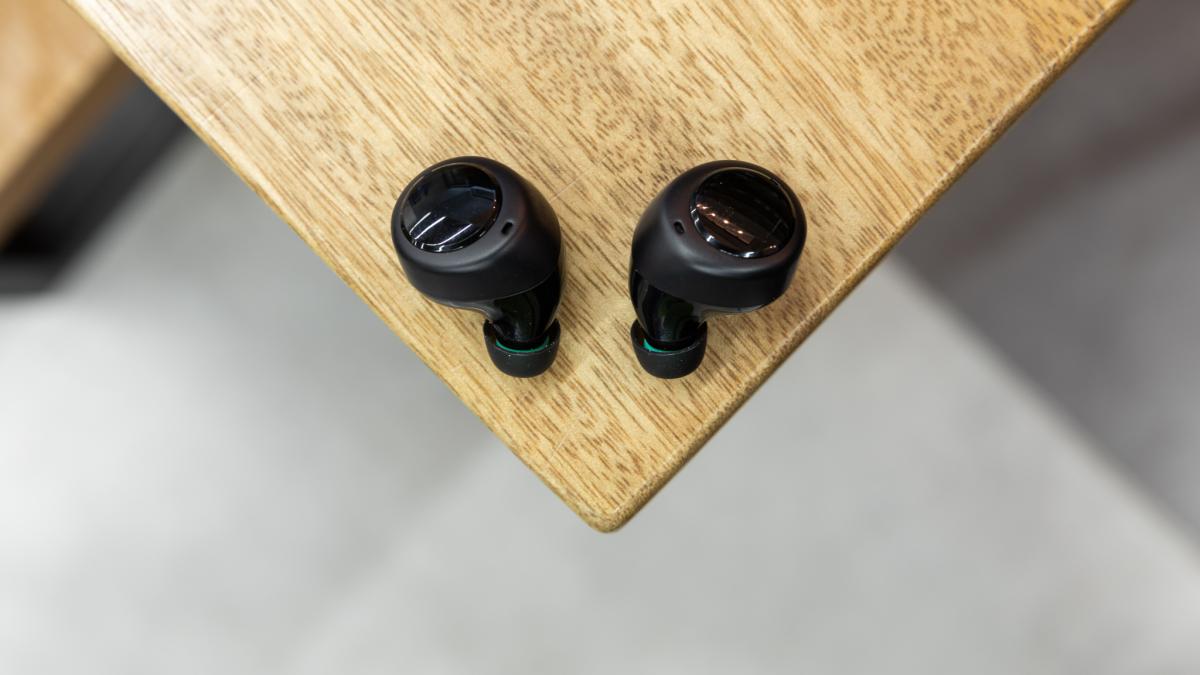 For those who’ve already bought into the Amazon Echo experience, getting a pair of Echo Buds is probably the next logical step. And if you’re simply after a pair of decent noise-cancelling earbuds at a fair price then the Echo Buds fit the bill – no matter whether you own an iPhone or an Android.

Previous ArticleApple Mac Pro Costs Over $50,000 if You Get All the Upgrades
Next ArticleCitizen has a fancier alternative to Amazon's Alexa wall clock
Comments (0)

Don't miss a deal at Marks and Spencer
Best offers at Bodybuilding
Discounts, Sales and Deals at Ancestry
Save your money with Go Daddy
Online-Shopping with Sky
Best products at O2 Mobile
Latest Posts