With bags of storage and an excellent 3:2 display, this lightweight Chinese laptop is a great value choice

Buying a Windows laptop from an unfamiliar Chinese brand may seem risky, but shop around and you can get a lot for your money. The Alldocube Kbook offers a persuasive specification for less than half the price of many big-name systems. Does there have to be a catch?

Alldocube Kbook review: What you need to know

The Kbook is a 13.5in laptop with a low-power Intel Core m3 processor. That means it’s perfectly fast enough for everyday word processing and web browsing, but when it comes to more demanding tasks such as video editing, performance will be a lot slower than with a regular Core i5 or i7 CPU.

Even so, you won’t be held back by a lack of memory or storage: the Kbook comes with a decent 8GB of RAM and a generous 512GB SATA SSD. And the screen is not only nice and bright, but it also features a 3:2 aspect ratio – in my view the optimum shape for a laptop screen. There aren’t many such displays around, so that alone makes the Kbook well worth a look.

The Alldocube Kbook as reviewed here can be had for £480 from Amazon. That’s a great price for a fully functional Windows laptop, and buying from a bonafide UK retailer ensures your statutory rights are protected.

If you want to keep the cost to a bare minimum, however, you can find the same machine for under £330 from Chinese retailer GearBest, or from the equally Chinese Banggood for under £320. Those are both “flash sale” prices, but such things come around pretty regularly, so if the price is higher when you click, you may just need to be a little patient and wait for the next reduction.

If you’d prefer a premium 13in laptop from a better-known brand, you’re going to have to pillage the savings account, because you’re now looking at something like Huawei’s impressive MateBook X Pro or the Microsoft Surface Laptop 3

The Kbook looks and feels like a serious laptop. The body, palm rest and lid are all made from aluminium and feel absolutely solid. Come the zombie apocalypse, I imagine the Kbook could easily double as a bludgeoning tool for keeping the undead hordes at bay. 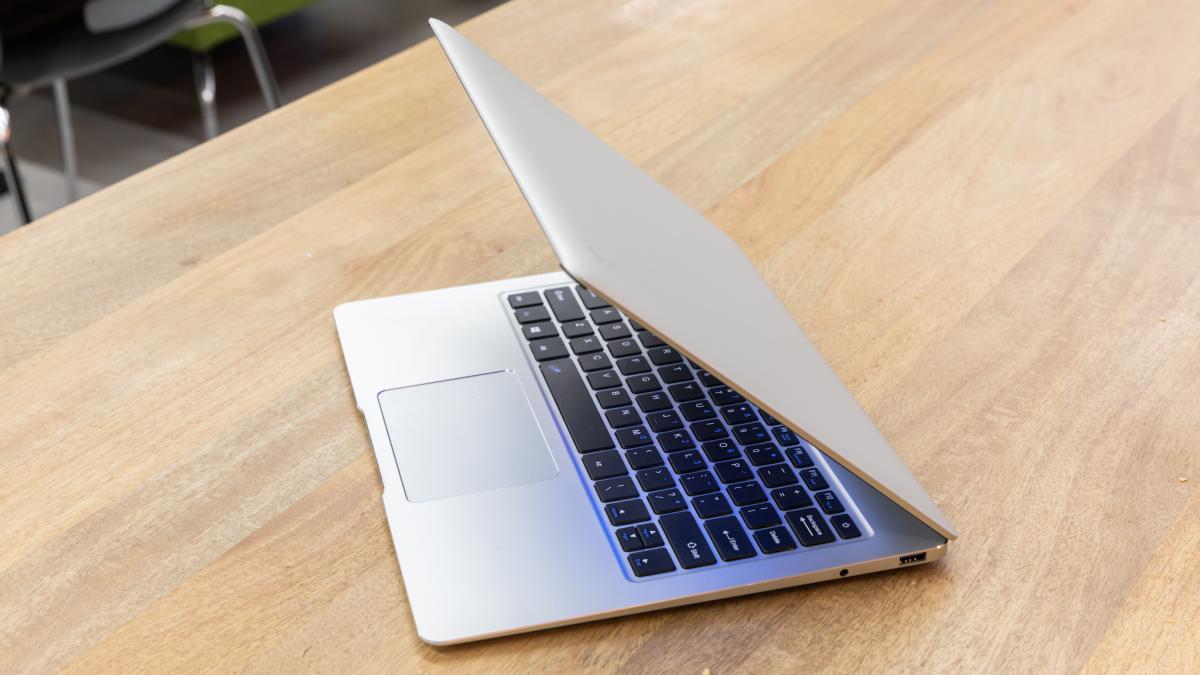 The one-piece lid hinge feels similarly well-engineered; there’s no doubt it will go the distance, and it tilts right back to a full 180°, which can be useful if you have the Kbook propped up on your lap.

Admittedly, there’s nothing really distinctive about the design. The Kbook’s silver livery is smart and handsome, but also rather generic in a pseudo-MacBook sort of way. The only branding is a small and rather intricate Alldocube logo on the corner of the lid. 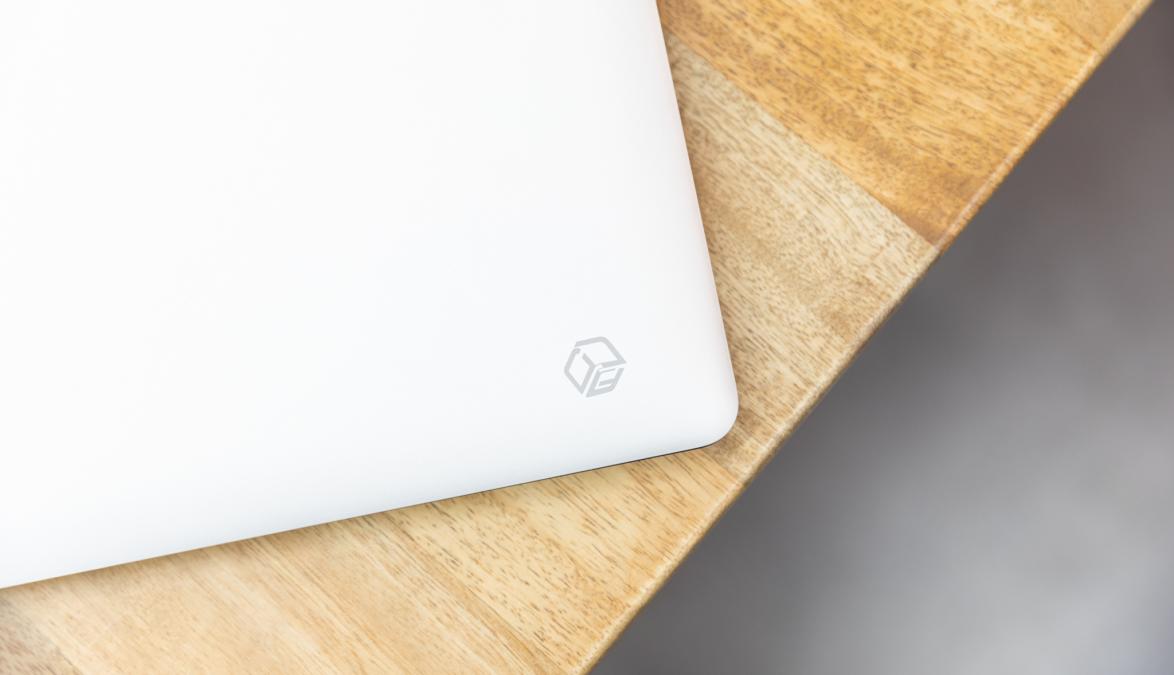 The eagle-eyed among you may have noticed that the case also lacks any speaker grilles. You might fear that this would cause poor audio, and sadly you’d be right. There’s a reasonable amount of volume available, but the sound is brittle and tinny, with bass notable only by its absence.

At 1.6kg the Kbook is a little heavier than the competition from Microsoft and Huawei, but I’m happy to trade the extra weight – about 270g over the MateBook X – in return for the brick-outhouse build quality. It’s also slightly larger, with a 312 x 238mm footprint and a maximum thickness of 1.5cm, but the difference isn’t really noticeable. 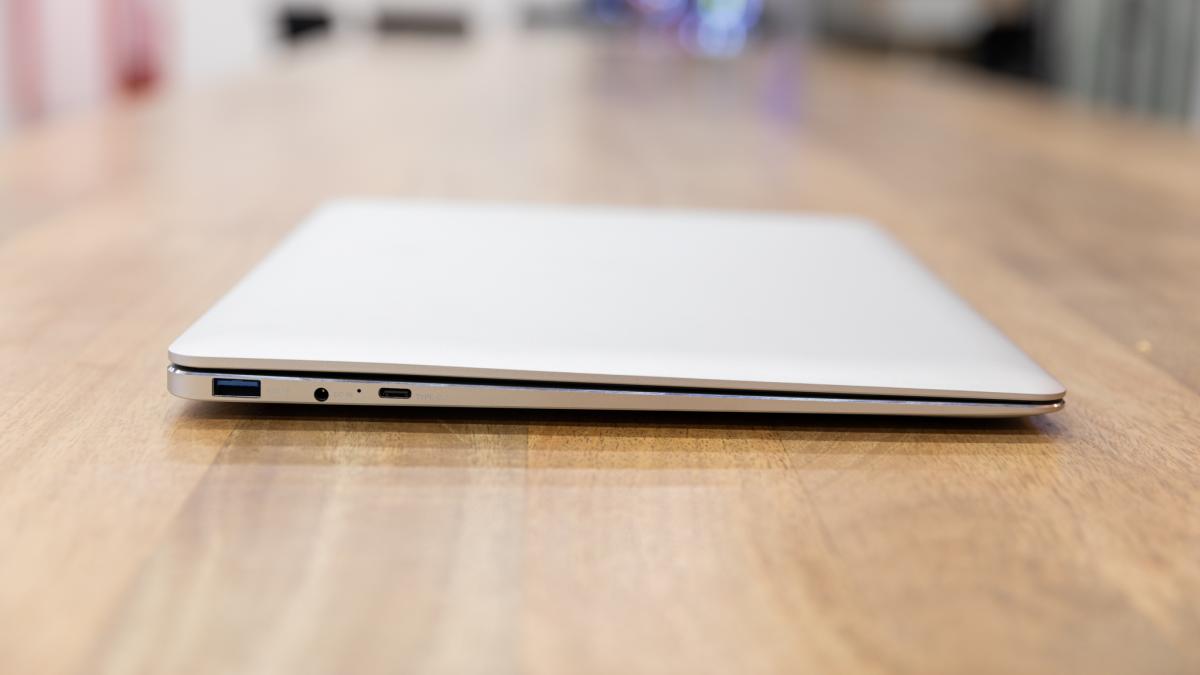 The keyboard is one of the weaker features of the Kbook. It’s rock-solid, but the key travel is shallow and the keys themselves are flat, with cheap-looking transfers rather than engravings. Alldocube’s Chinese rival Chuwi uses a more premium-feeling keyboard on its similarly priced AeroBook, and on its even cheaper LapBook SE laptops.

Another small irritation is that there’s no keyboard shortcut for adjusting the screen brightness. Nor is there a fingerprint scanner, nor even a backlight – and as you’d expect, the keyboard uses a generic international layout, rather than a UK-specific one. The touchpad is also rather small for my taste. 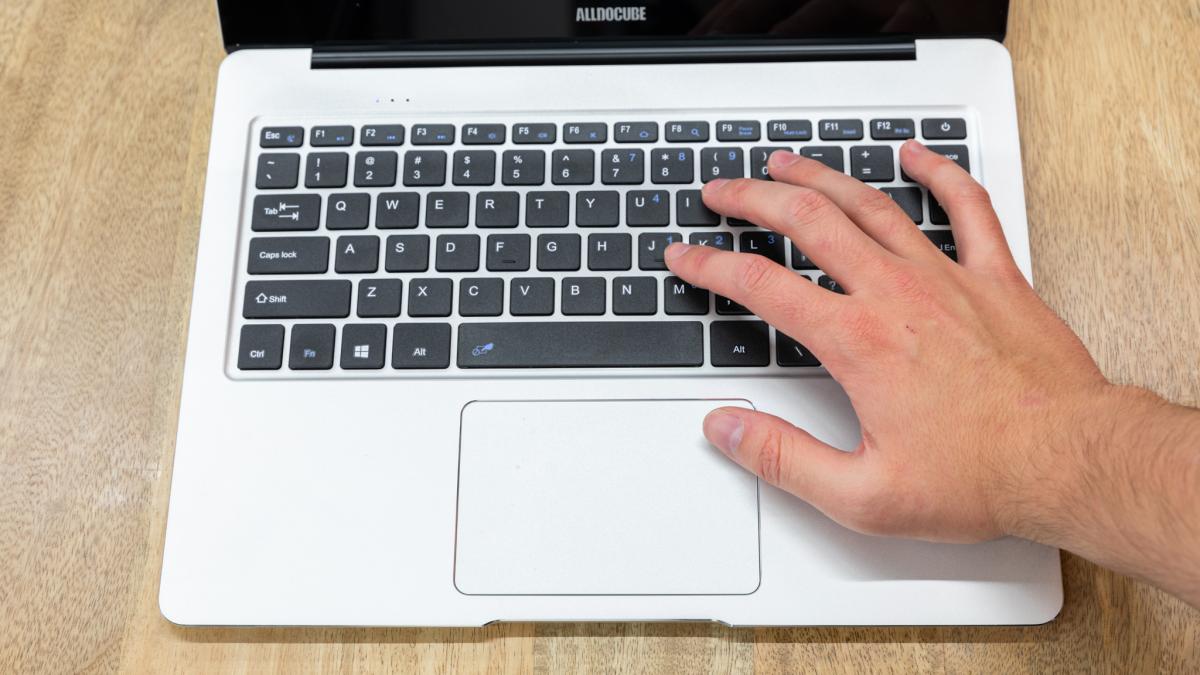 As for connectivity, the slender sides of the Kbook offer just two USB 3 Type-A ports, one Type-C connector and a 3.5mm audio jack. It would have been nice to see a microSD card slot and an HDMI port since there’s plenty of room for them: a decent Type-C dock could add both, but that’s hardly as convenient. On the plus side, you have the option of charging through either the USB Type-C port or the dedicated DC power socket, using the bundled charger. 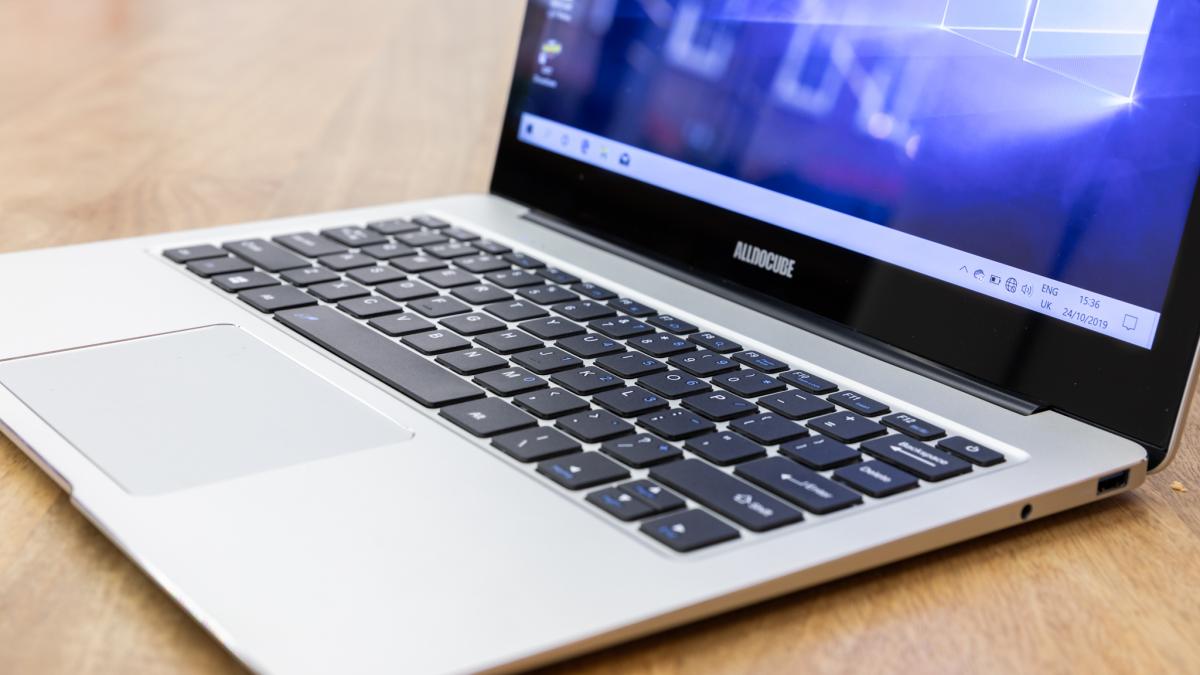 It’s also possible to open up the chassis to access the storage. There’s no bay for a second SSD, but if 512GB isn’t enough for you, you can easily swap the installed Hoodisk SATA card for something more capacious.

I’ve heard it rumoured that the Kbook uses the same Panasonic-made display as Microsoft’s original Surface Book; since the part numbers don’t match I’m not convinced, but either way, it’s an excellent-looking panel. Beneath fully laminated gloss-finish glass it delivers a pin-sharp resolution of 267 DPI, with an impressive maximum brightness of 455cd/m2 and contrast ratio of 1,490:1. 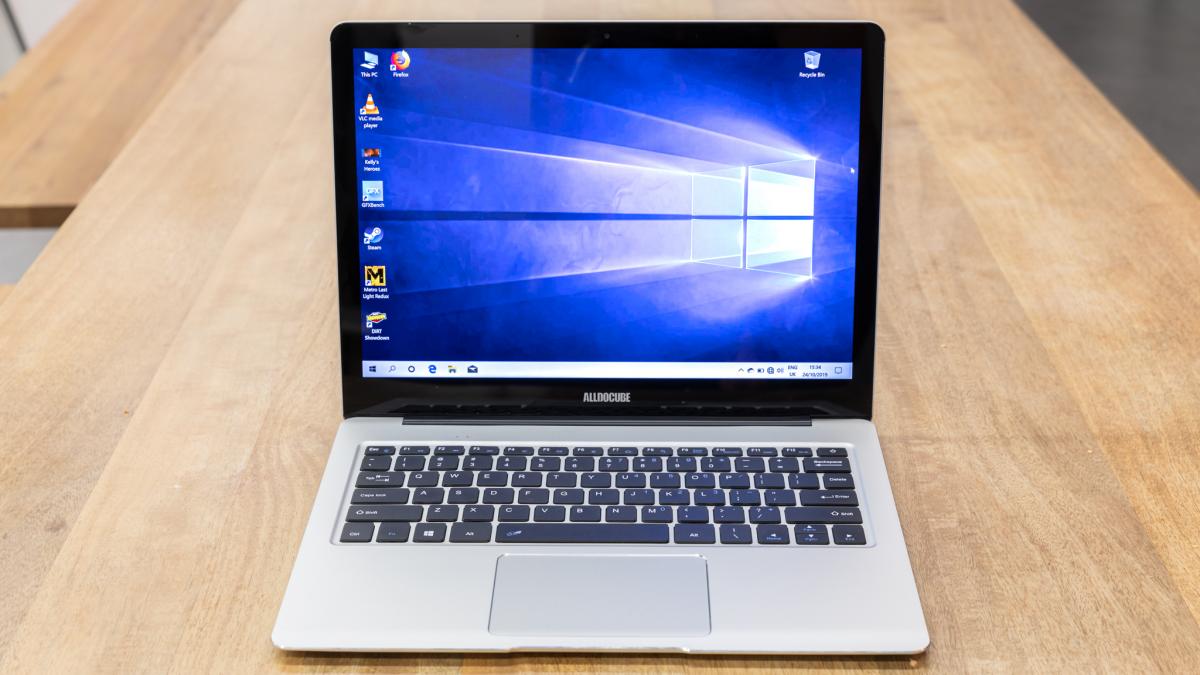 Colour performance is adequate rather than great, however. You get 76% sRGB coverage, with no support for HDR playback and somewhat uneven brightness uniformity. The display’s 11mm bezels are also larger than you’ll find on the more upmarket competition, and the screen isn’t touch-enabled. For this price though, those criticisms seem churlish. Sitting above the display, the Kbook’s 2MP webcam does a decent enough job.

Inside the Kbook you’ll find an Intel Core m3-6Y30 processor. This dual-core CPU is as lightweight as they come, with a base speed of just 900MHz that rises to a maximum turbo speed of 2.2GHz. It’s also dated, having previously appeared in the entry-level 12in Apple MacBook way back in 2016.

The sheer age of this processor raises a couple of video-related issues. For one, the chipset only supports HDMI 1.4, so there’s no support for 60Hz 4K output. It also doesn’t support hardware decoding for 10-bit HEVC video, so 4K video streams can be choppy, to say the least. These problems will only bother you if you plan on streaming a lot of Ultra HD video – in which case you’re probably budgeting more than this anyway. 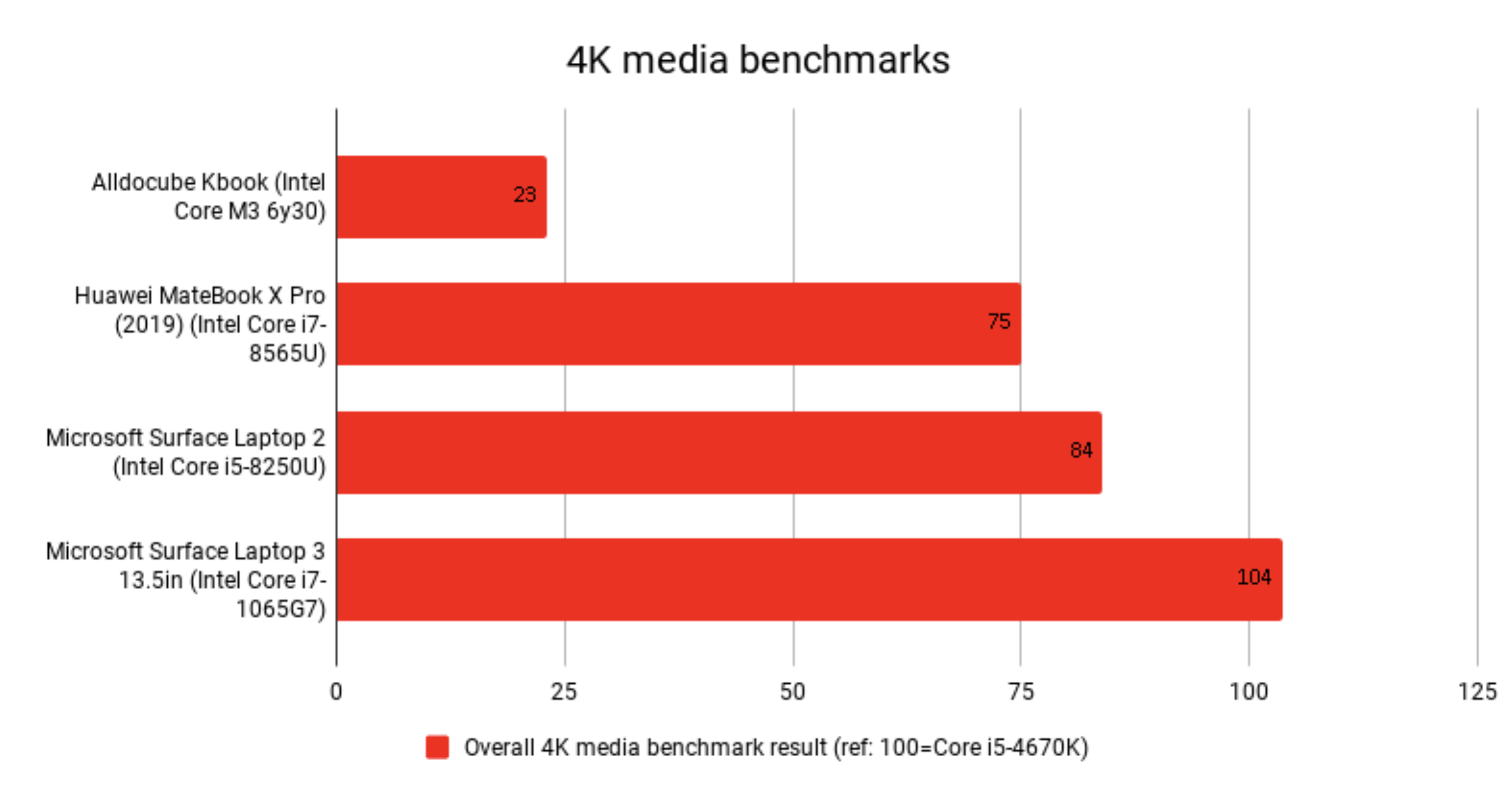 Aside from that, the Kbook performs much like the aforementioned MacBook, or any Windows machine based on the same SoC, such as the Asus UX305 Zenbook. That’s confirmed by our benchmarks: the Kbook scored 23 in our standard test suite, with Geekbench scores of 2347 (single-core) and 4689 (multi-core). Clearly, this isn’t a machine for heavy workloads, but the general user experience is perfectly fluid – much more so than anything you’ll get from an Atom or Celeron processor. 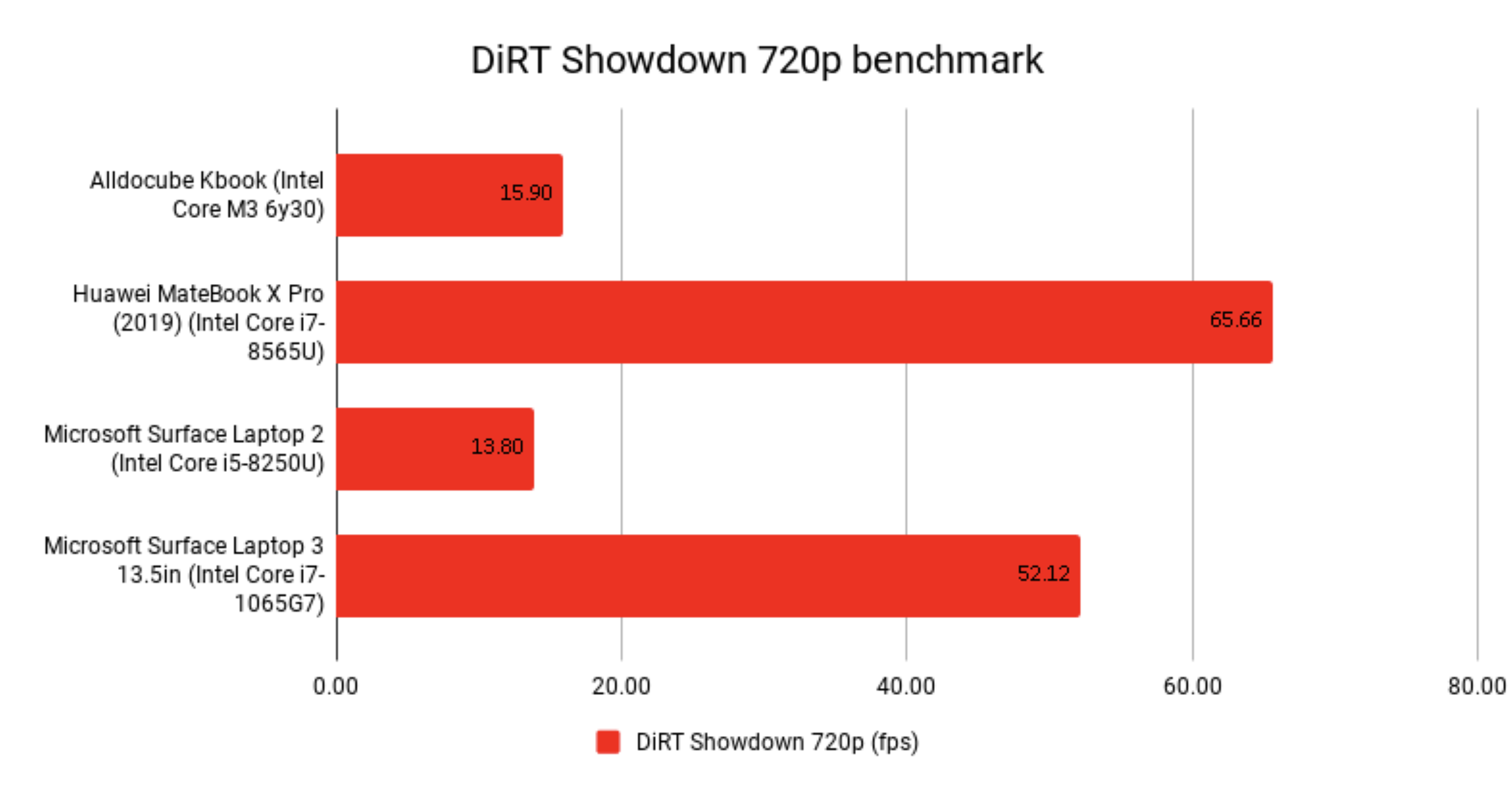 It’s a similar story with gaming. Intel’s HD Graphics 515 GPU was never designed to run demanding 3D games on a near-4K display, but if you don’t mind switching the resolution down to Full HD and reducing the detail settings then you can still get an enjoyable experience from titles like Metro: Last Light Redux and DiRT Showdown. Metro even ran – albeit a bit haltingly – at the Kbook’s native 3,000 x 2,000 resolution, though again only with the graphics detail set to “low”.

The Kbook also has one advantage over many other Intel Core m laptops: the BIOS lets you boost the TDP from the standard 4.5W to a maximum of 7W. Bump it up to the highest setting and you’ll notice a definite increase in performance. Bear in mind though that internal temperatures will go up too: my Kbook only got hot when running games in 1080p or higher, but I’d still recommend setting it on a thermal pad to help dissipate heat if you plan on boosting the power limit.

Finally, while our tests focus on Windows, there’s good news for anyone seeking a low-cost Linux laptop: I’m happy to report that both Ubuntu 19.10 and Intel’s Clear Linux distro installed and worked perfectly.

A bright, high-resolution screen rarely goes hand in hand with long battery life, and the Expert Reviews video loop test drained the Kbook’s 5,000mAh battery in just over 4hrs 30mins. That’s adequate, but no more. Turn the screen brightness down and you can get close to the six-hour mark in more general use.

The Kbook is an impressively capable and well-made laptop. The 3:2 screen is outstanding, and while performance has its limitations, it’s absolutely fine as an everyday portable companion. A touchscreen, keyboard backlight and memory card slot wouldn’t have gone amiss, but these are hardly deal-breakers considering the excellent price of the Alldocube Kbook.