ADT Blue Doorbell Camera review: It’s not much to look at, but it offers premium features and a good picture

ADT’s Blue Smart Doorbell Camera is a wired video doorbell that can operate on its own, in conjunction with ADT’s Blue Indoor Camera (reviewed here) and Blue Outdoor Camera (review forthcoming), or be integrated into the broader LifeShield DIY home security system that ADT acquired last year (ADT is in the process of rebranding LifeShield as Blue by ADT).

Like competing video doorbells, the Blue Smart Doorbell Camera features a two-way talk function allowing owners to both talk to people at their front door and hear them via a smartphone app. ADT says the camera captures 180 degrees of view from left to right and is water resistant for use outdoors.

It connects via Wi-Fi and comes with a couple of detection features for free that are premium functions on some competing cameras: motion detection zones and facial recognition. You also get 24 hours of video storage in the cloud without needing a subscription. The camera is compatible with Amazon Alexa and IFTTT.

Installation was relatively easy. The doorbell requires a 16- to 24-volt AC power supply, which is the standard doorbell supply in the United States.

Most video doorbells clip onto a mounting bracket that is screwed into the wall, but the Blue is a bit different. Rather than use a bracket, the Blue doorbell uses a “power bracket.” This is a mounting bracket with a built-in battery. The doorbell then clips onto that. The addition of a battery in the base means it will continue to work if the doorbell power is cut. 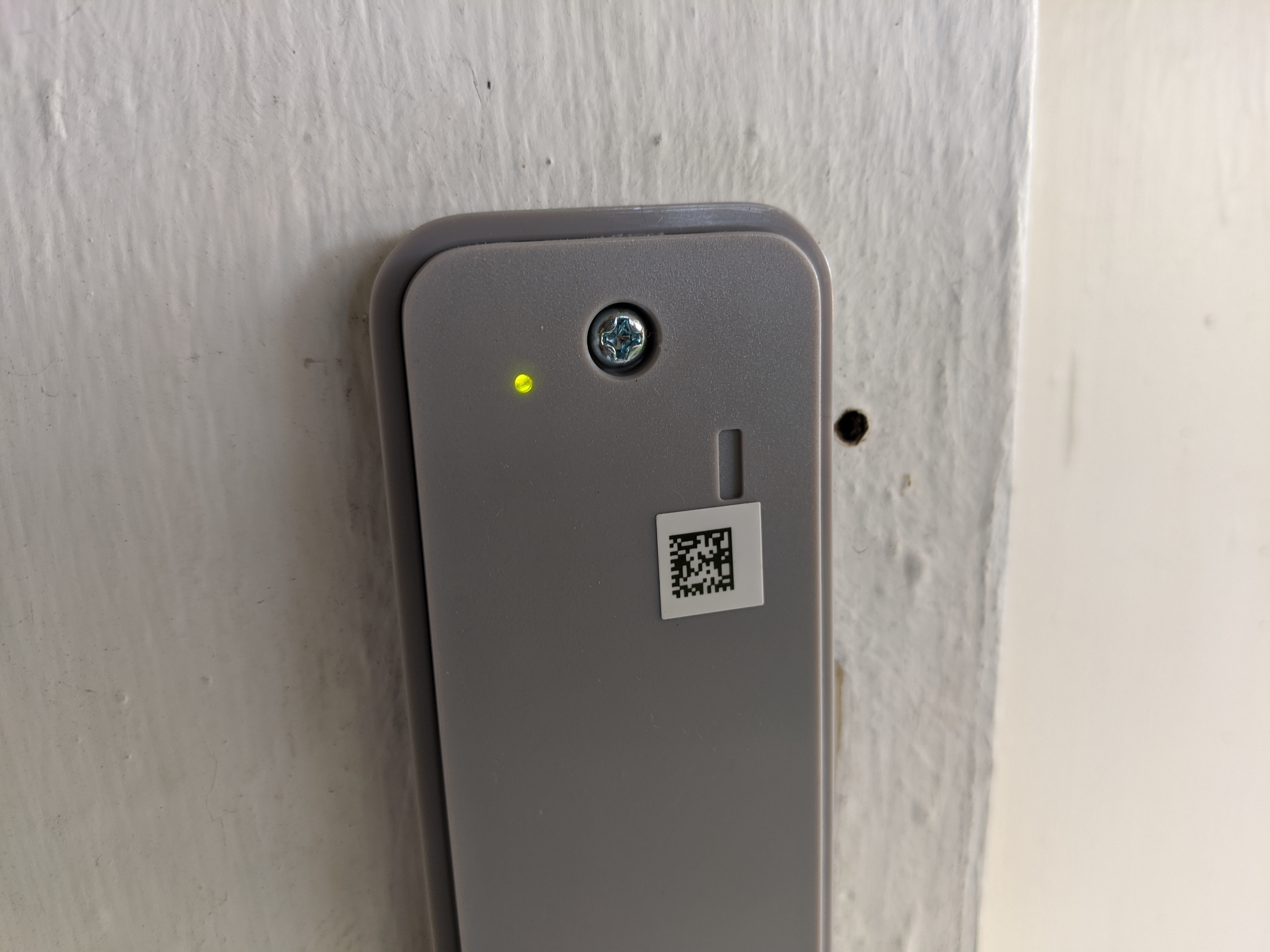 The power bracket attaches to the wall with two screws, and ADT also supplies adhesive strips as an alternative. These aren’t as secure or permanent, but very often renters cannot drill into their walls.

Connecting the doorbell to your home Wi-Fi network works with the Blue by ADT app and camera together. The app displays a QR Code that includes the name and password of your Wi-Fi network. You simply hold your smartphone screen in front of the doorbell’s camera, and it captures the barcode and uses the information to connect to your Wi-Fi.

When I eventually got the doorbell switched on, connecting was easy and fast. It took me a while to realize that the doorbell comes with a tiny DIP switch on the rear, which is set in the “off” position. At first, I thought the doorbell was dead, but it just needed to be switched on. The app does tell you to switch it on and I missed that, so it’s my fault that I had problems; but I also think it’s unnecessary to ship it switched off. No other doorbell camera I’ve tested comes like that. 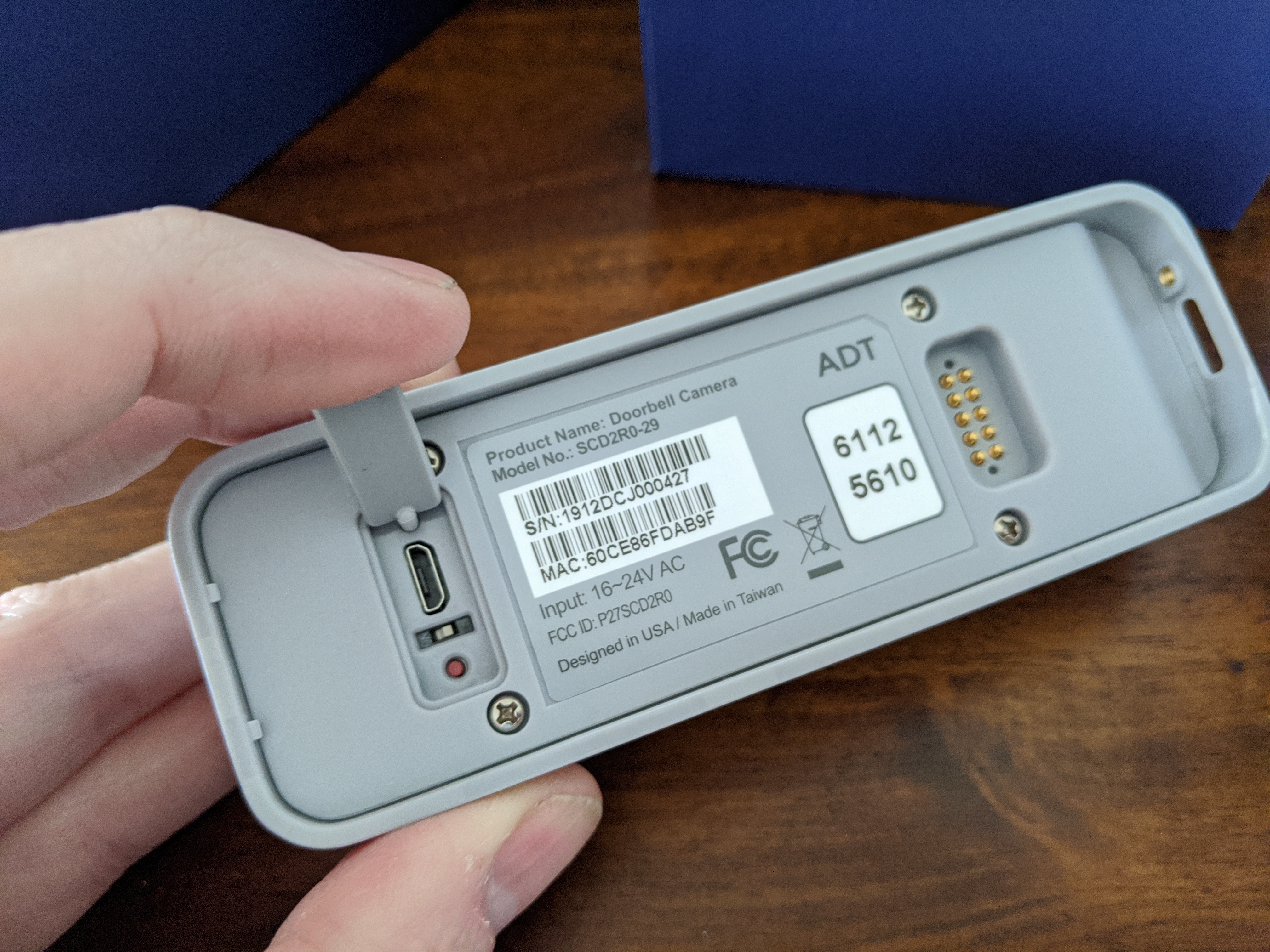 The doorbell shares the same design as other devices in the Blue family: a chunky matt gray plastic case with a large black circular piece of plastic around the camera and a stripe across the lower left of the body that glows when it’s active. I’m not a particular fan of the design but your taste may differ.

The image from the doorbell was nice and sharp on my phone and it worked during daylight and at night. At night the image is black and white, but I noticed it switched into daytime color mode when my porch lights came on. 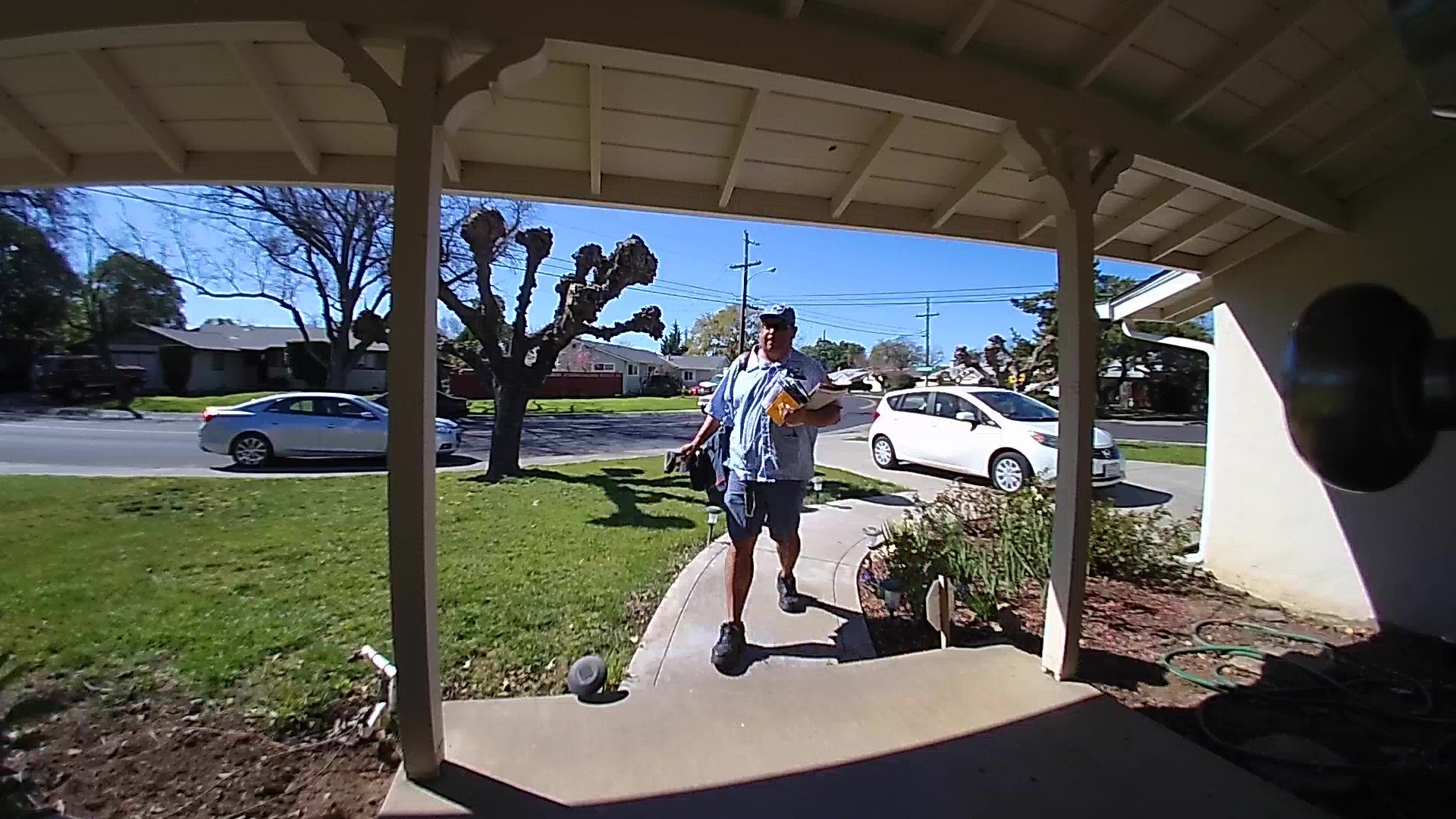 There are several motion-detection settings. At its most basic, it will alert to any movement within range, but I found that resulted in excessive alerts. My phone was buzzed every time a car drove down the street in front of my house.

It quietened down considerably when I switched it to person detection, which attempts to alert only on movement by people and ignores things like vehicles. It got even quieter when I set a custom detection zone covering just my property, rather than the street as well.

There’s also an option to completely disable motion detection and just get alerts when the doorbell button is pushed. 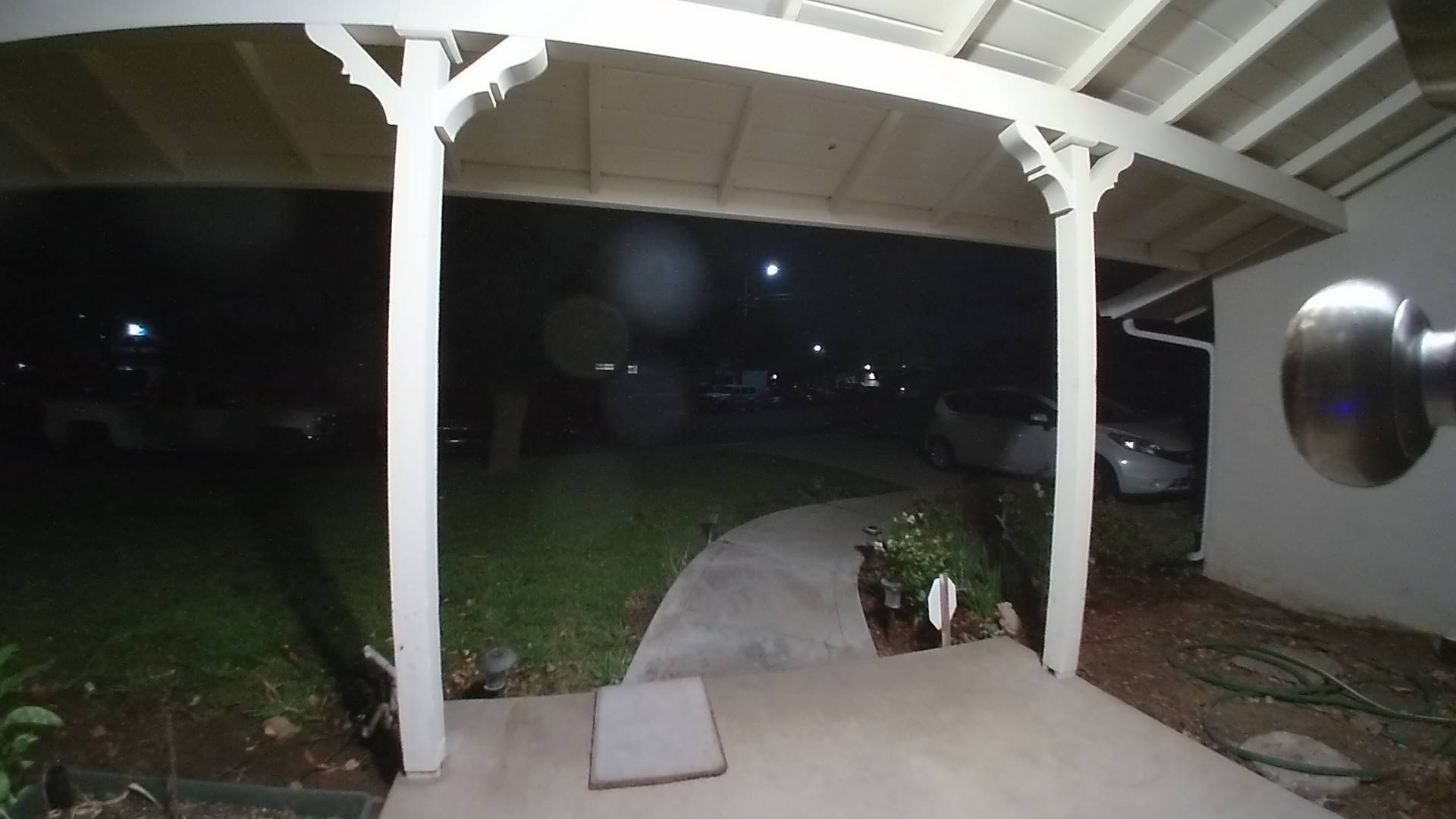 A facial recognition feature will notify of familiar or unfamiliar faces. I didn’t use it for long enough to get a good feel for how well this works. It’s been my experience with other doorbells that it takes several weeks or months for such a system to work really well.

When someone does come to your door, you can remotely speak to them and hear what they have to say through the app.

For an additional $50, users can add a range extender and chime to the unit. It connects via low-power wireless to the video doorbell and provides a bridge to the Wi-Fi network. It also includes a loud chime that will sound when someone presses the doorbell button.

Like the rest of the system, the chime is a chunky device in a matt gray plastic. In use, it worked just as intended. The range extension function also works with the Blue Indoor and Outdoor cameras, and if you have one of ADT’s DIY security systems, the chime can function as an additional siren should the alarm system be triggered. 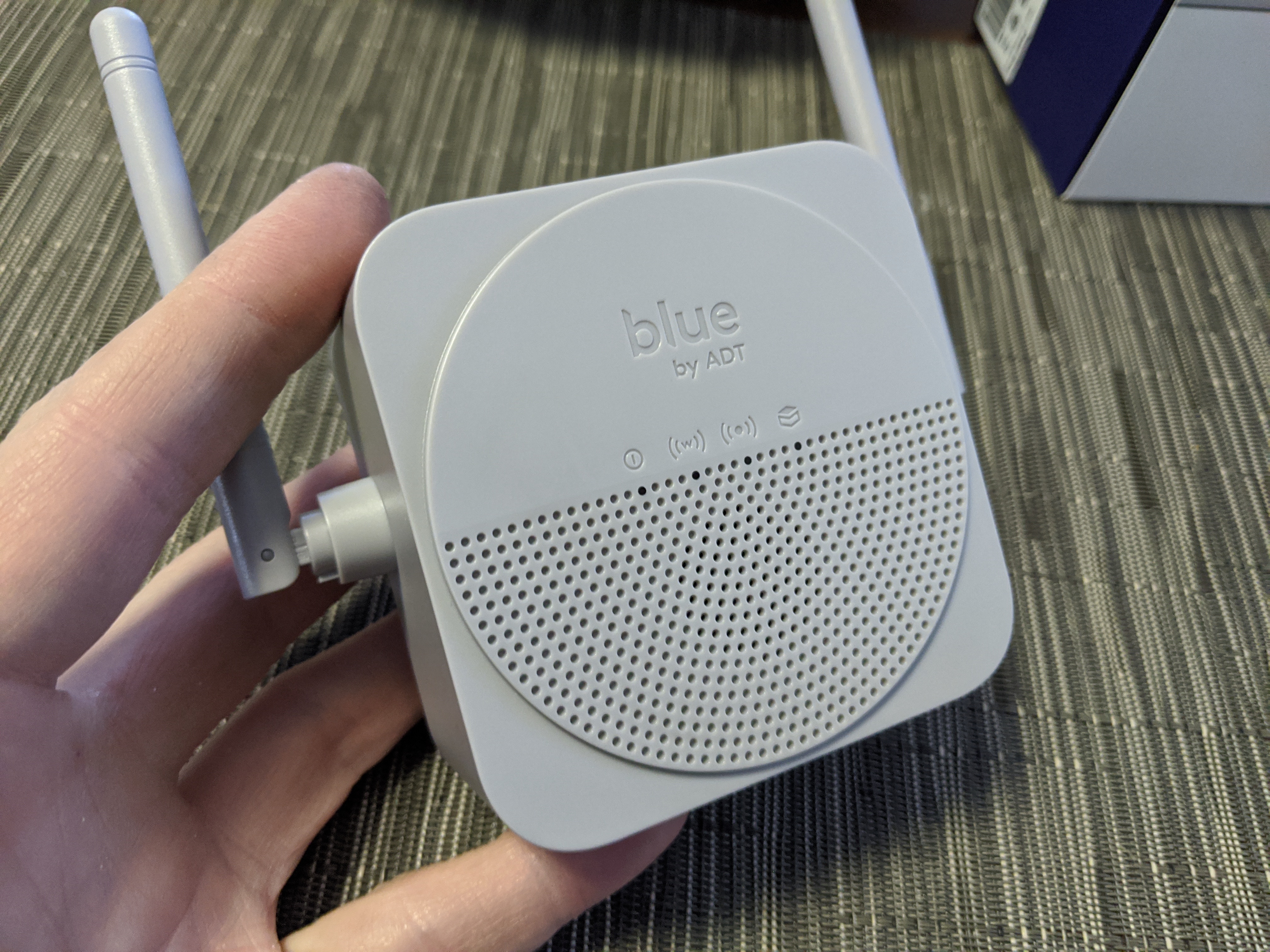 The Ring Video Doorbell 2 remains our top recommendation if you need a battery-powered doorbell, and the Arlo Video Doorbell is a slightly more sophisticated hardwired product than ADT’s offering, but you’ll need to pay a $2.99-per-month subscription to get the full benefit from it. The ADT Blue Doorbell camera, on the other hand, can be integrated into a broader DIY home security system—and it’s $50 cheaper than the Vivint Doorbell Camera Pro, which is more sophisticated but requires professional installation and a monthly service plan.

The Blue Smart Doorbell Camera from ADT is a wired video doorbell that offers advanced detection features and 24 hours of cloud storage without a monthly subscription.

Don't miss a deal at Carphone Warehouse
Best offers at Go Daddy
Discounts, Sales and Deals at EE Mobile
Save your money with Farfetch
Online-Shopping with Sephora
Best products at Myprotein
Latest Posts